Driver Leaves After Knocking Motorcyclist Down At Woodlands, Other Rider Pursues & Confronts Them Fleeing from responsibility is not cool.

Rider Pursues Driver Who Left After Knocking Over Motorcyclist At Woodlands

Hit-and-run cases often infuriate viewers as they watch someone flee the scene, hoping to escape responsibility.

One motorcyclist wasn’t having any of it as he went after a driver who had knocked down another rider in Woodlands.

The sequence of events was caught on a dashcam camera and the footage was shared on Facebook on 19 Apr.

The video has since gone viral with over 5,000 shares and 700 comments, mainly from angry netizens.

Shared on the SG Road Vigilante – SGRV Facebook page, the two-minute clip shows the collision between a driver and motorcyclist along Woodlands Avenue 1.

It also shows part of the aftermath, in which another rider pursues the driver who attempted to flee the scene.

The video starts by showing motorists waiting for the traffic lights to turn green. Seconds later, presumably unable to stop on time, a black car zooms in from the right, rear-ending a motorcyclist.

The rider was tossed out of his bike and onto the road.

Nearby, another motorcyclist alighted from his vehicle and rushed to the aid of the fallen rider.

As he was tending to the victim, the errant driver started to manoeuvre their vehicle around them to get out of the scene.

This presumably shocked the helpful motorcyclist, who took another look to confirm that the driver was making a run for it.

Perplexed by the situation and with the victim seemingly unharmed, the heroic rider made his way back to his motorcycle and gave chase.

At this moment, the driver of the car with the dashcam started honking, hoping to alert other motorists ahead to stop the perpetrator.

Thankfully, due to roadworks up ahead, the culprit had no choice but to slow down, giving time for the car and rider to catch up.

As the rider approached the driver’s side window, he engaged in a heated argument with the culprit. 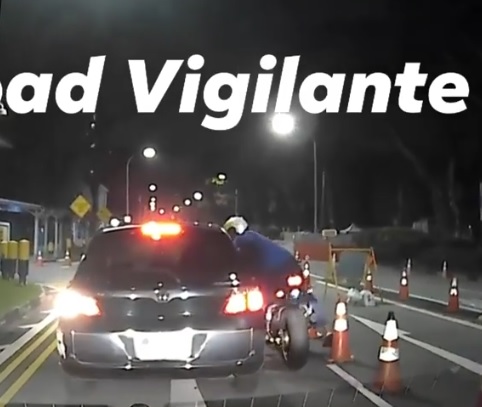 The video ends without a clear indication of a resolution.

Accidents can happen on the road due to a myriad of reasons.

However, what’s important is to own up to any mistakes and render assistance to those affected as quickly as possible.

Kudos to the rider and owner of the dashcam for giving the culprit a sobering reminder. We hope the authorities are aware of this incident and will be taking appropriate action against the perpetrator.