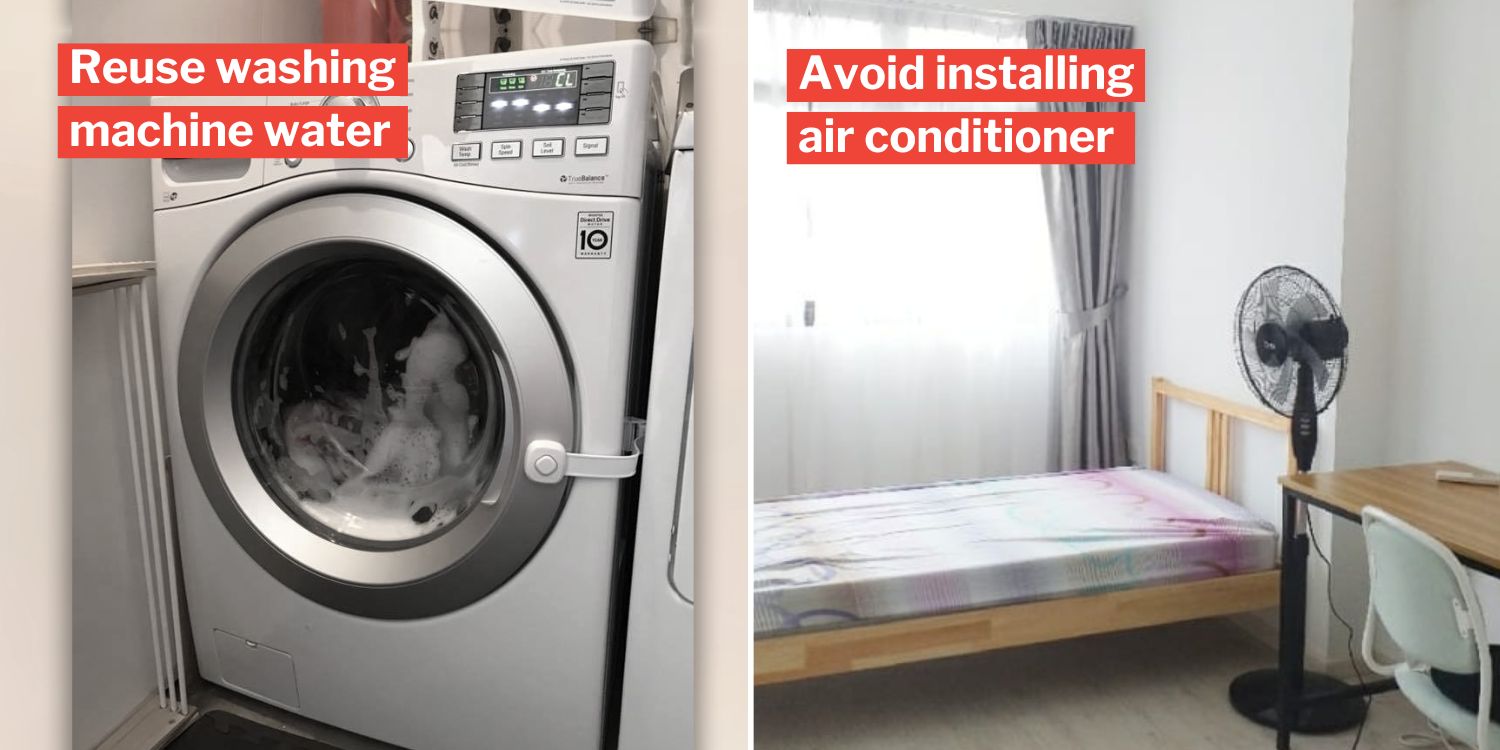 Someone uses leftover washing machine water to mop the floor.

Unusual Ways Homeowners Have Tried To Save Money On Household Bills

With the cost of living going nowhere but up, up, up, Singaporeans are certainly feeling the pinch.

That feeling is even more intense if they’ve moved into their own place and actually have to start paying their own bills. Now, they finally know how their parents feel every time they check the utility bills. 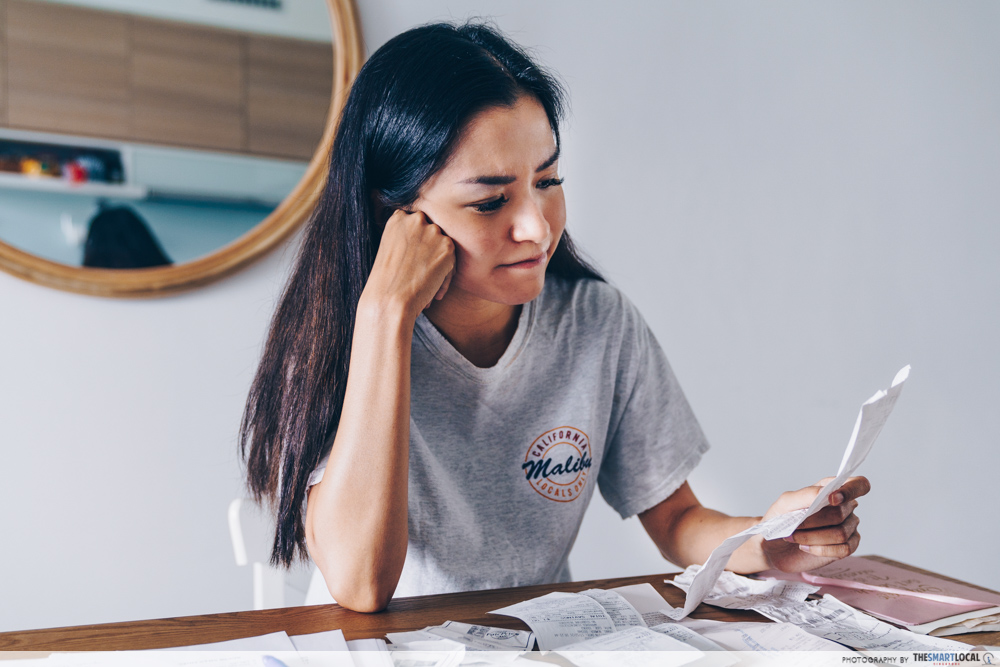 In order to save their hard-earned dough, some folks have resorted to pretty unconventional methods to try and spend as little as possible.

We speak to people to learn what kind of strange yet effective frugal habits they practise at home. Who knows — you might end up picking up a useful tip or two to try for yourself.

Clean old built-in furniture instead of replacing it

After you’ve finally gotten the keys to your new place, the next thing to worry about is renovations. This can easily burn a hole in your pocket depending on how extensive it is.

When Ms H, a content creator in her 30s, bought her decades-old resale flat, she decided to save money by keeping the existing built-in carpentry as replacing them would have been very expensive.

However, because the furniture was very old, they were also quite dirty, and her interior designer only did minimal surface cleaning.

Baulking at the S$1,000 quote she received for a more thorough move–in cleaning, Ms H decided to take matters into her own hands — literally. 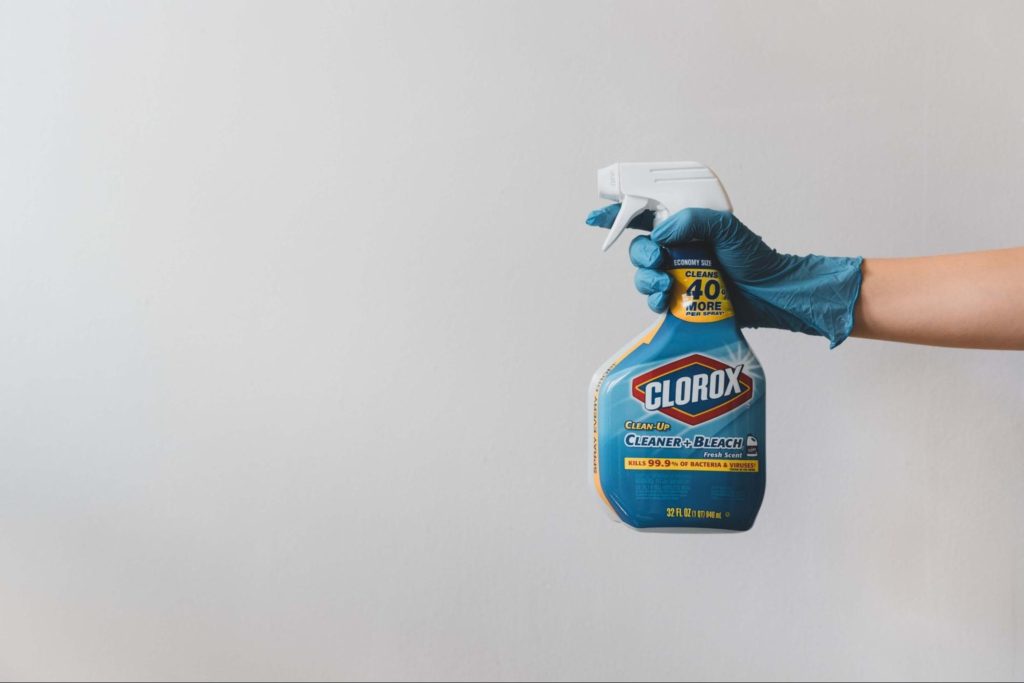 She spent a whole day taking out every panel from an old closet and cleaning them one by one with bleach herself.

While it was a difficult and unpleasant task, it was also easier on her wallet, leaving her with more to spend on other areas of the apartment.

In hot and humid Singapore, an air conditioner is an absolutely essential item in most households. However, these appliances are also responsible for causing power bills to surge if you don’t control your usage. 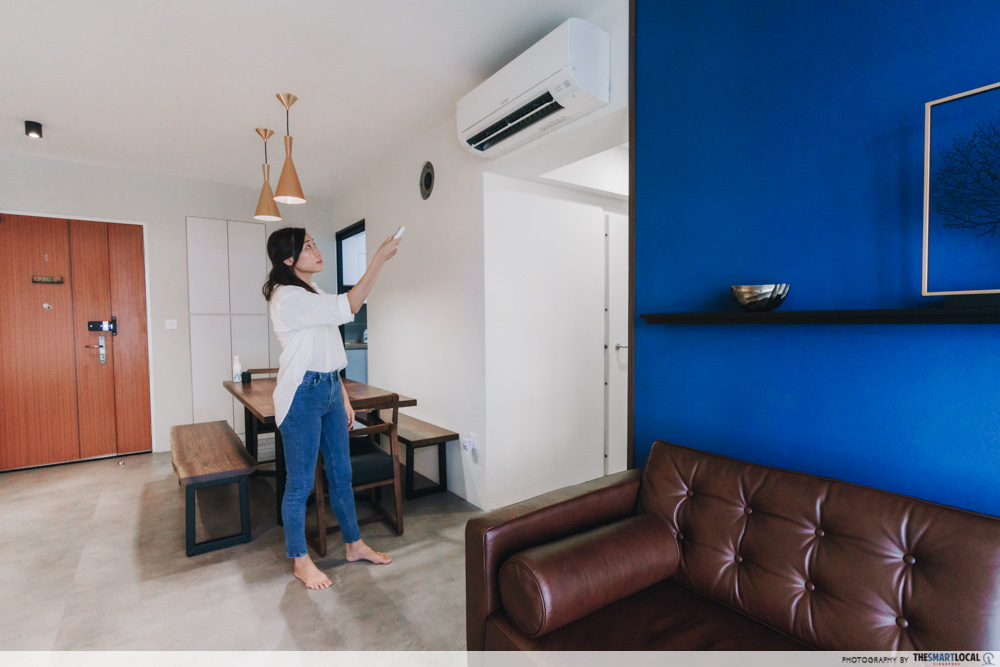 Ms Chen, self-employed and in her 40s, avoids this problem completely by choosing not to replace the old air conditioner that the previous owner installed in her flat. In fact, she isn’t even sure if it still works.

The last time she switched it on was five years ago, and now, she says it’s just there for “decoration”. She beats the heat by having a fan blasting at her at all times, adding that she is someone who is sensitive to the cold anyway.

According to Ms Chen, leaving the air conditioner off saves her around S$60 a month on her bills, at least compared to her friends who do use the AC.

Reduce the flow of the water pipe

Water consumption is another thing that could eat into a chunk of your monthly household budget. The pandemic exacerbated this as people were staying at home and washing their hands more. 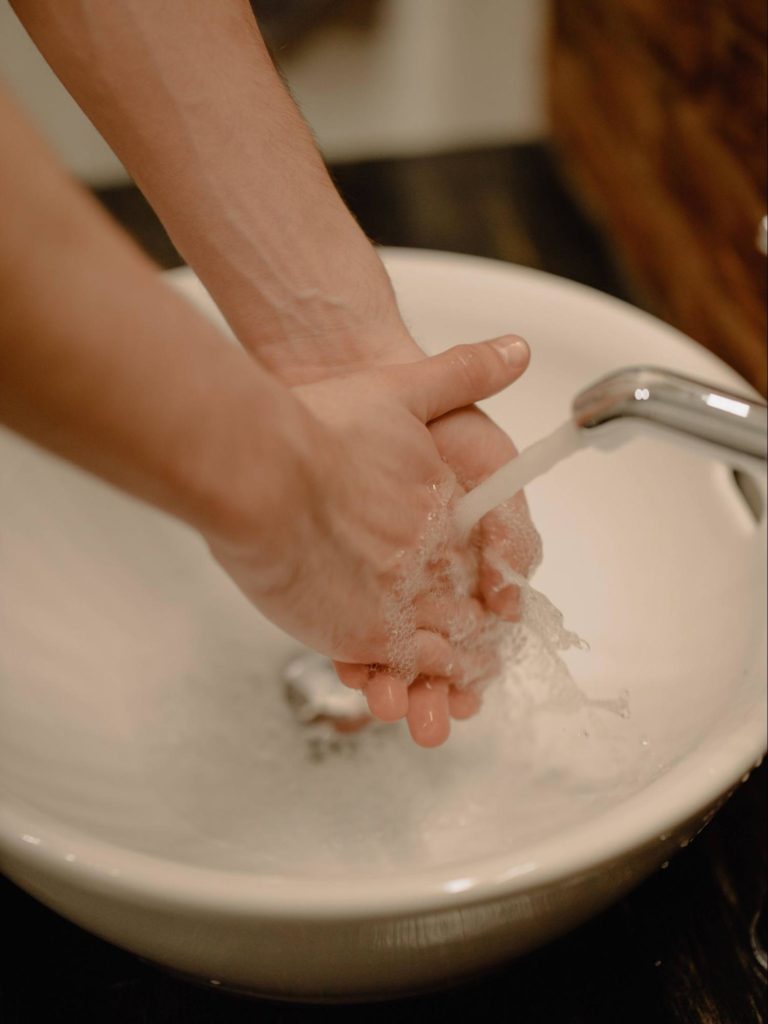 While one can just have more discipline in controlling their water usage, video producer Ms Nyna, 25, and her family take things one step further by lowering the pressure in the main water pipe outside their HDB unit.

That way, there’s less water flowing through the whole house at all times.

Although Ms Nyna says the water pressure is still “reasonable”, there are certain inconveniences and limitations.

For instance, they cannot use the two showers at the same time as the water pressure will be “very, very low”. They also have to avoid doing the laundry whenever someone is showering or washing the dishes.

However, this method seems to be working wonders as Ms Nyna’s father has stated that it has helped him to save a lot of money over the years.

Use water from washing machine to mop floor

Another common way people save water is by collecting rainwater in buckets to use later. But what happens when it’s the dry season or you don’t have a proper outdoor area to place the bucket?

Operations executive Mr Chee Ming, 33, found a way around this with his washing machine. 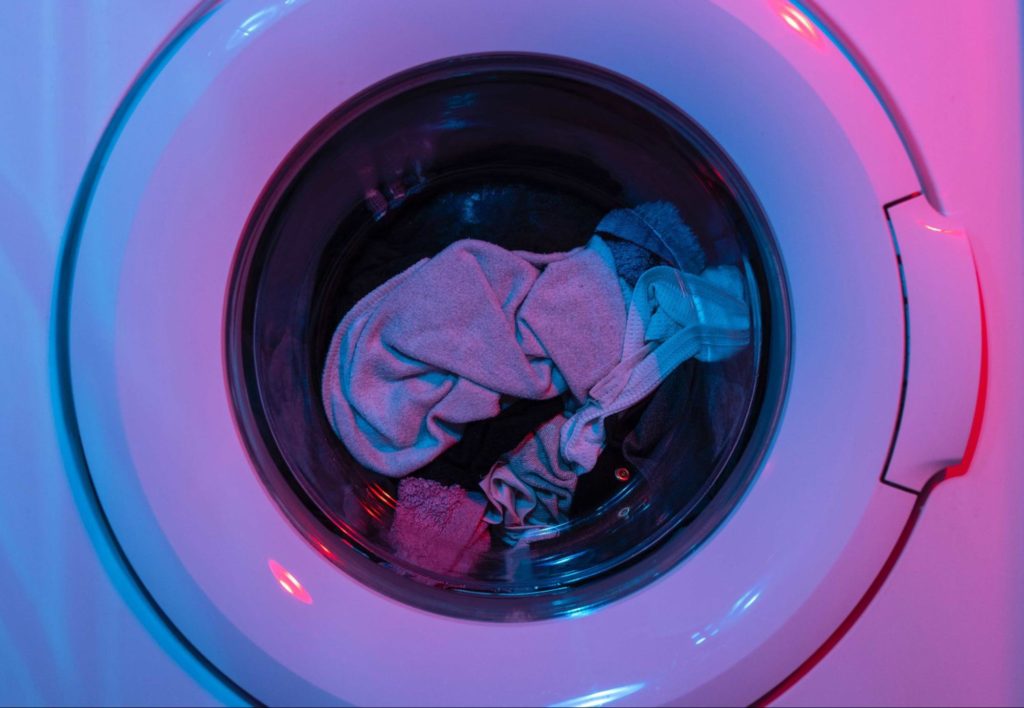 Whenever he does the laundry, he keeps the water from the second rinse – which is cleaner compared to the first rinse – by letting it run into a pail from the drainage pipe.

He then uses this water to mop the floor. Not having to fill up big buckets of fresh water from the tap every time he cleans the house has certainly helped to keep the water bills down.

You’d be amazed at what Singaporeans discard every day. Just ask writer Ms Emily Ng, 34, who has a knack for discovering items in good condition that residents simply leave at HDB void decks. 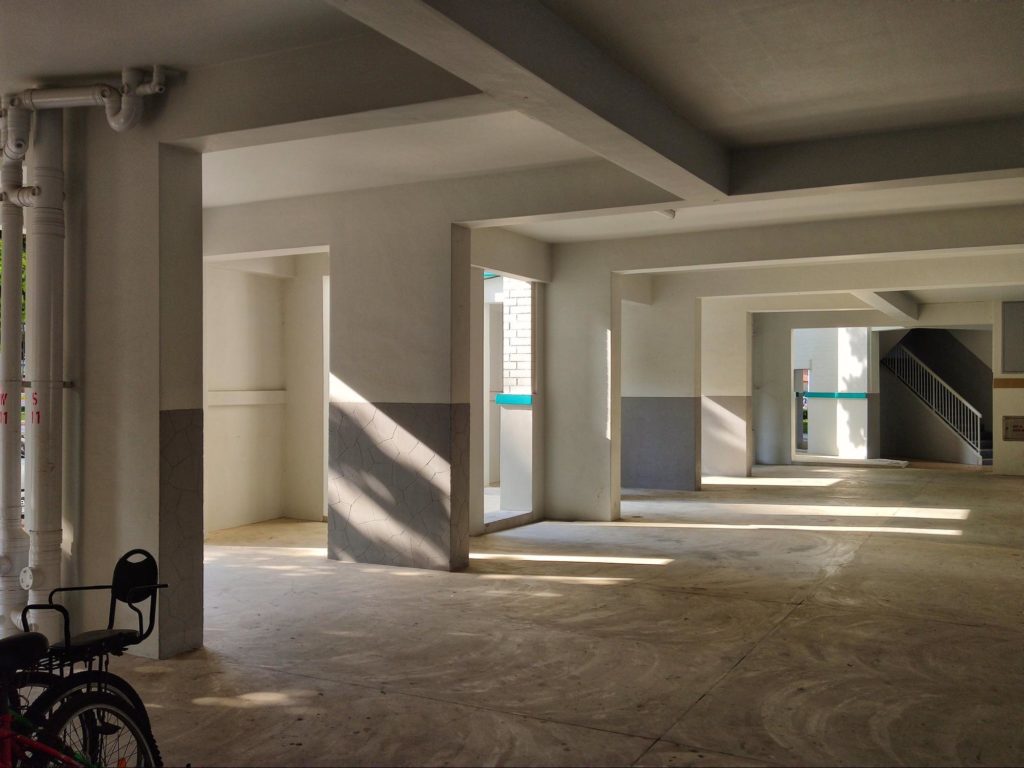 Her biggest hauls have been CDs and clothes. She recently picked up a Superdry sweater and even a large plastic container to keep it in along with her other preloved fashion finds.

Once, she saw an entire chest of drawers that someone had thrown out — with a book, a biography of Mr Lee Kuan Yew, in “perfect condition” still inside. She gave it away as a gift.

Other goodies Ms Ng has found include “perfect” ceramic plates – she says folks throw these out “all the time” – and flash drives.

So the next time you pass by an HDB void deck, keep an eye out for anything that looks abandoned but is still in decent condition. If you’re lucky enough to get anything you need for free, you’ll have more money to go towards other expenses, including your bills.

The ‘Circuit Breaker’ was a time when many started unleashing their inner chefs. It was also when customer service manager Ms Amber, 30, stumbled upon a quick and easy concoction that also happened to save her quite a bit of money.

It began when she started drinking protein shakes for fitness purposes. However, because she disliked the taste, she would blend it with fruits like bananas or strawberries. 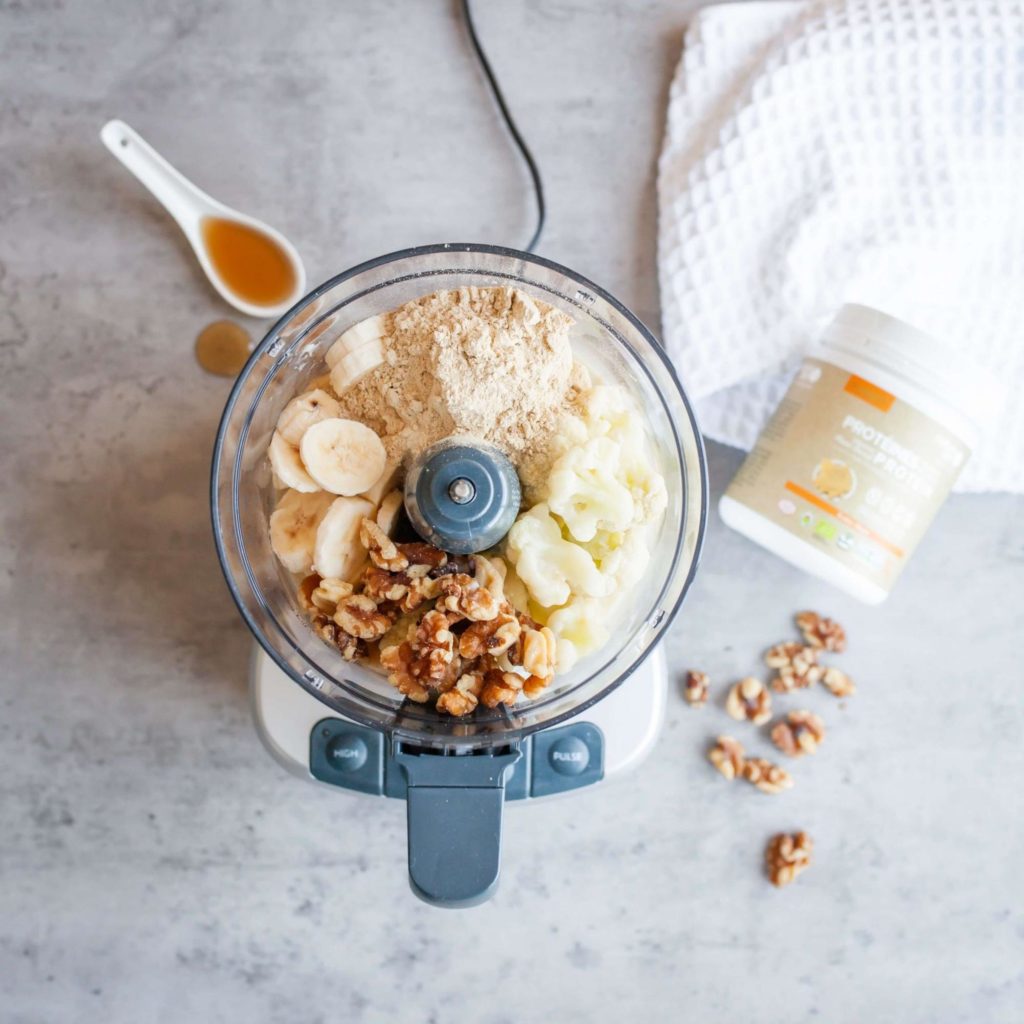 She drank it as her dinner about four times a week. Though it was filling enough on its own, she would occasionally supplement it with hard-boiled eggs or more fruits.

While she wasn’t intentionally trying to save money, she soon noticed that she was spending a lot less on her meals — almost half the usual amount, in fact, based on rough calculations.

This is because one tub of protein powder could easily last her about six months. She would also be careful not to spend too much on the fruits.

Upon realising how economical and even healthy this ‘meal’ was, Ms Amber continues to have it for dinner once or twice a week today.

Okay, so this isn’t ridiculous at all — in fact, it’s downright brilliant.

While doing whatever we can to save money is important, it actually doesn’t have to be all that complicated or inconvenient.

Thanks to the Open Electricity Market (OEM), households in Singapore can get their electricity from any retailer they choose. This gives everyone the freedom to select a plan that best suits their budget and needs. 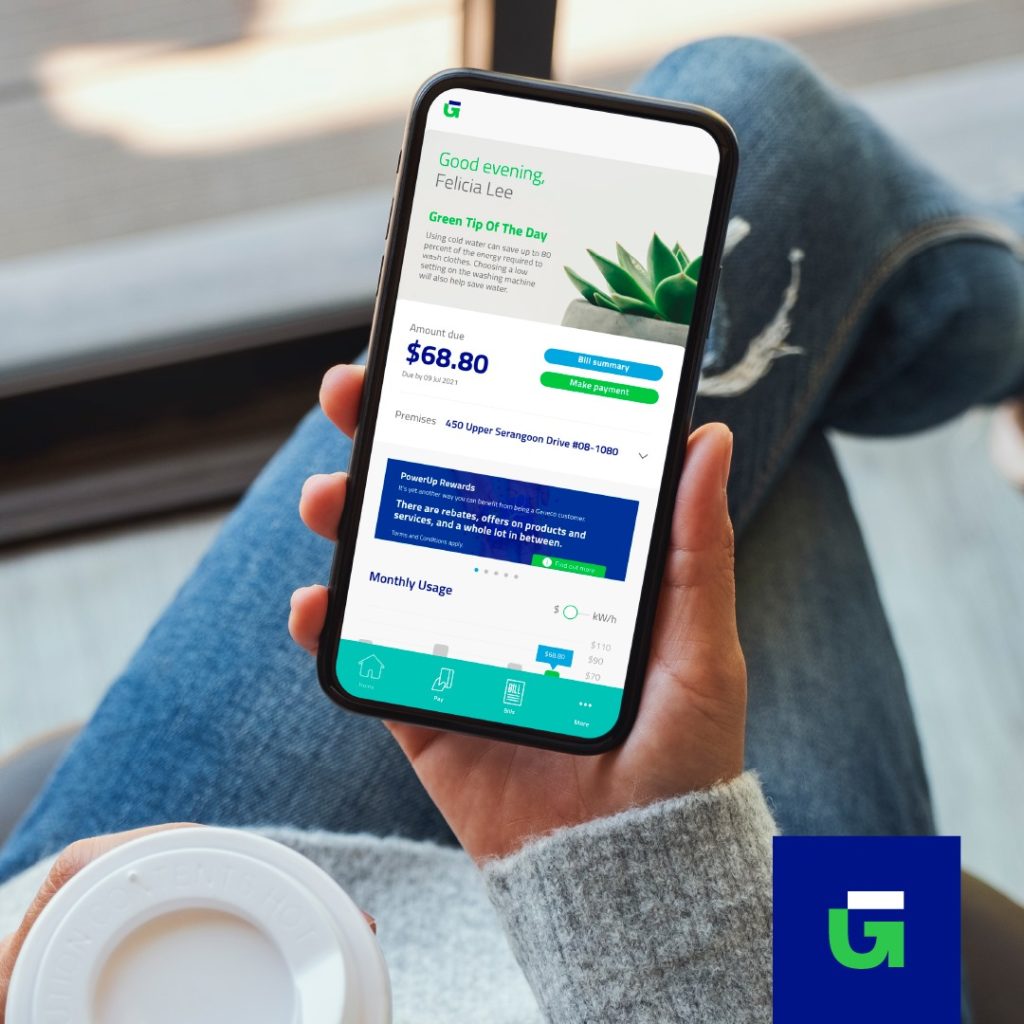 Fixed-rate electricity plans, such as Geneco’s most popular plan, Get It Fixed 24, are a great option for those with concerns about cost as they won’t have to fret about potential fluctuations in the regulated tariff taking their bills sky-high.

What’s more, with their Price Match Guarantee, Geneco will refund the difference for your contracted period if you somehow manage to find a price that’s even lower within seven working days of signing up.

Now if that doesn’t show how confident they are in their rates, we don’t know what will.

Enjoy up to S$125 in electricity bill rebates with Geneco

To celebrate Geneco becoming Singapore’s number one residential electricity retailer that’s trusted by over 160,000 homes, they’re offering loads of enticing rebates that are sure to appease even the most penny-pinching bunch.

You can easily save up to S$125 by doing the following:

Mandopop fans are in for a treat as well. As the Presenter of Jay Chou’s Carnival World Tour Singapore concert, Geneco is giving away pairs of tickets worth S$436.

To stand a chance to be one of the 50 lucky winners, all you have to do is sign up for the Get It Fixed 24 plan and you will automatically be entered into the draw. To double your odds, get the Power Eco Add-on, Singapore’s first and only customisable green add-on for an electricity plan.

Winners will be picked and notified by end October. Good luck!

Switching over is easy and can be done in less than five minutes. For more information and to sign up, visit Geneco’s website here.

Save money in a smarter way

Part of adulting involves keeping track of where every dollar goes, and this can understandably be stressful and overwhelming at times.

However, by making smart choices like switching to the right electricity plan that gives you peace of mind, you won’t need to make any unusual changes to your lifestyle just for the sake of spending less.

After all, life is tough enough as it is, and if there’s a way to make sure we have one less thing to worry about, then doesn’t it make sense just to do it?

This post was brought to you in collaboration with Geneco.