Ironically, despite spectacular performances from athletes, arguably less hype has been granted to the Asian Games 2018 held in Jakarta, Indonesia.

Roanne Ho, our 50m breaststroke comeback queen, penned a heartfelt post on Saturday (25 Aug) about her struggles leading up to her surprise silver medal.

Here’s how the 24-year-old swimmer mustered up the courage to return to the sport after multiple setbacks: 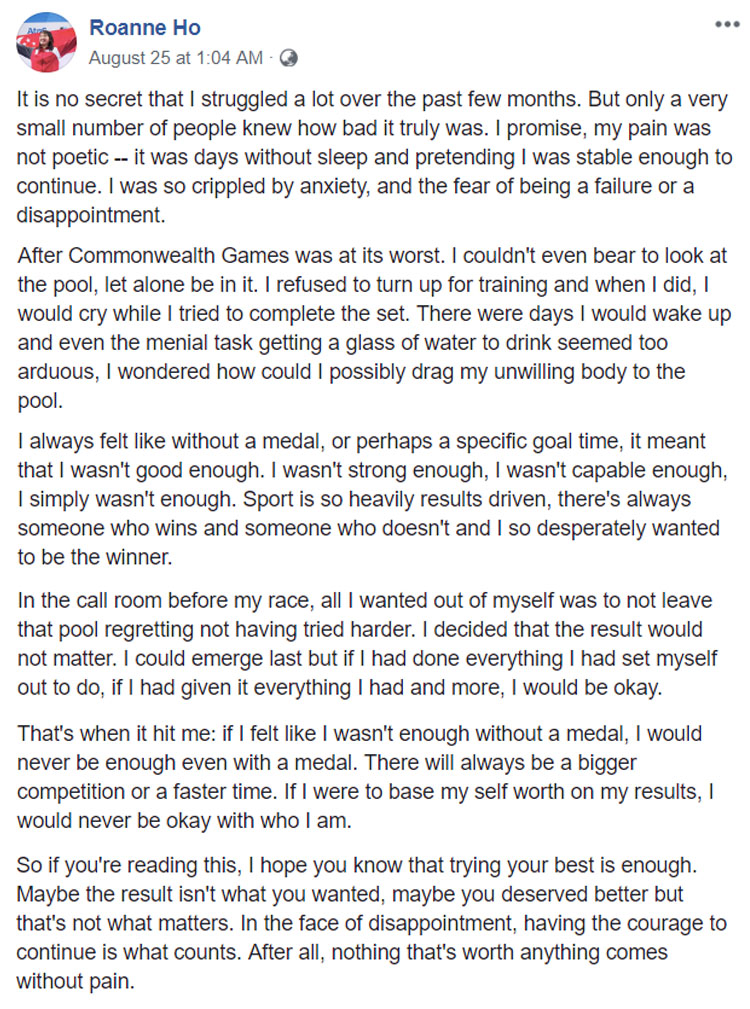 Vomited 7 times in 45 min before finals

Roanne pulled an underdog victory in her 50m event with a national record-breaking time of 31.23 seconds — beating out China’s Feng Junyang and placing second behind Japan’s Satomi Suzuki.

She had also suffered from a “stomach bug” just 3 days before the final — vomiting up to 7 times in 45 minutes at one point.

But there was even more to her victory, than what remained on the surface.

Roanne shared that most people around her were aware of her struggles — but only a select few were privy to how “bad it truly was”.

Days without sleep and having to pretend she was stable enough to continue, resulted in crippling anxiety.

She simply feared being a failure or a disappointment to those she loved.

Couldn’t even look at the pool

Her disappointing 8th place finish in the Commonwealth Games 2018, was her lowest point.

I couldn’t even bear to look at the pool, let alone be in it. I refused to turn up for training and when I did, I would cry while I tried to complete the set.

Nothing without a medal

Providing commentary on the results-driven nature of sports, and by extension Singapore, Roanne added,

I always felt like without a medal…it meant that I wasn’t good enough. I wasn’t strong enough, I wasn’t capable enough, I simply wasn’t enough.

Her desperation for a win had taken her this far, but things were about to change in this pivotal match.

As she prepped herself for her race in the call room, Roanne tried a different approach this time,

All I wanted out of myself was to not leave that pool regretting not having tried harder. I decided that the result would not matter.

Even if she came in last, but had given it her all, she would be okay.

And that’s when the young athlete came to a timely realisation,

That’s when it hit me: if I felt like I wasn’t enough without a medal, I would never be enough even with a medal.

If she continued to base her self-worth on her results, she would never be okay with who she was.

Especially since she would always be competing with even tougher opponents in the future.

Nothing that’s worth anything comes without pain

The young swimmer who’s now tasted success had wise words for her peers,

I hope you know that trying your best is enough. Maybe the result isn’t what you wanted, maybe you deserved better but that’s not what matters.

She adds that having the courage to continue despite facing setbacks is what counts,

After all, nothing that’s worth anything comes without pain.

We would like to congratulate Roanne Ho for her long-awaited win for Singapore.

All of us can definitely relate to feeling inadequate and feeling like we’re “never enough”, but we can take heart that Roanne has succeeded simply by believing in herself.

Against all odds, she’s emerged victorious not only in her sport, but reaffirmed her self-worth in the best way possible.