SAF Commander Allegedly Scolds Stranger Who Tells Him To Mask Up, MINDEF Disciplines Him 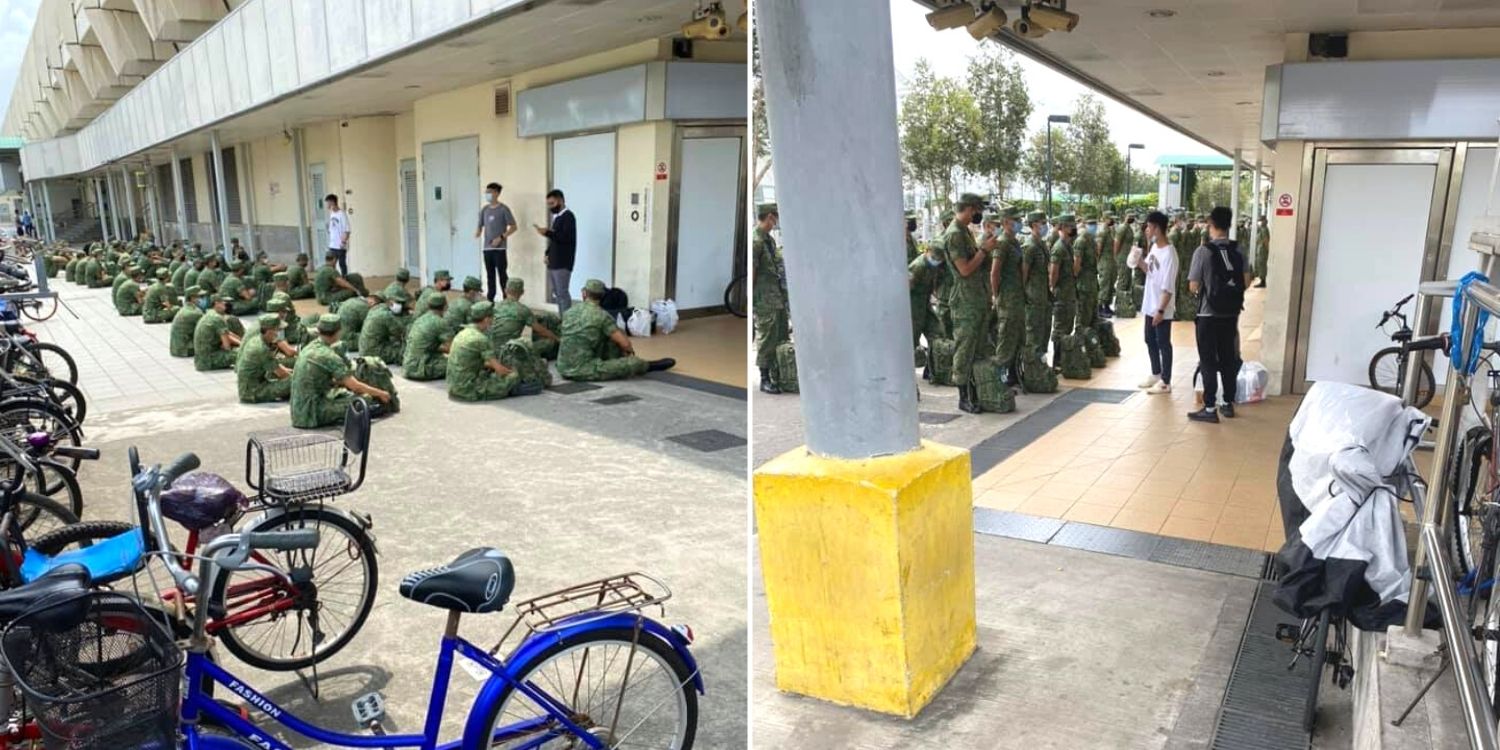 He was seen with a drink in hand & a mask underneath his chin.

SAF Commander Reminded To Mask Up At Pasir Ris MRT

UPDATE (27 Jul, 6.40pm): MINDEF announced that the SAF commander will be “disciplinarily dealt with” after he was found to be in breach of Safe Management Measures (SMMs). You may read the full statement below.

Masks are necessary in our lives these days, as they’re deemed an effective preventive measure that’s easy to implement during the pandemic.

However, some may struggle to adhere to this rule every day. And for a certain Singapore Armed Forces (SAF) commander, he was seen wearing a mask below his chin when commanding his soldiers.

The commander was then told to mask up by a stranger at Pasir Ris MRT. However, the stranger was met with resistance and was allegedly scolded by the commander. 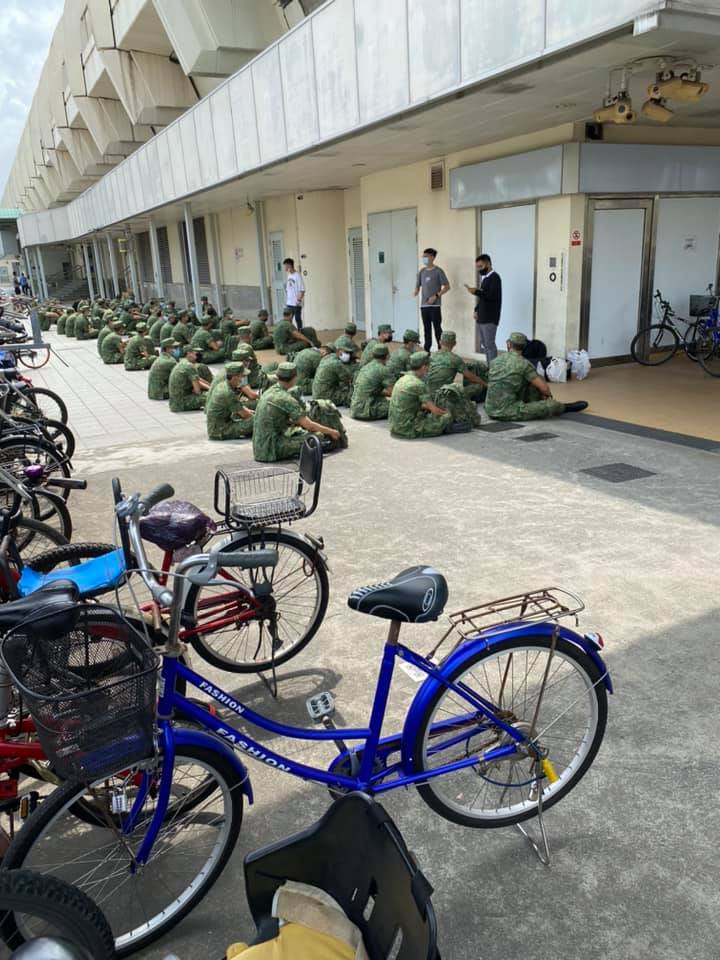 In response to queries from the media, MINDEF said that they have completed investigations and will discipline the commander accordingly:

The Singapore Armed Forces (SAF) has completed investigations of the SAF commander who did not comply with Safe Management Measures (SMMs) while addressing BMT recruits near Pasir Ris MRT station on 26 July. The commander was found to have breached SMMs and will be disciplinarily dealt with. SMMs are critical to ensure the safe conduct of the SAF’s training and operations, and our commanders are expected to set a positive example as well as enforce those rules to protect themselves and their trainees.

According to the post shared on the Complaint Singapore Facebook group, the SAF commander was instructing a platoon of soldiers near Pasir Ris MRT on Monday (26 Jul). 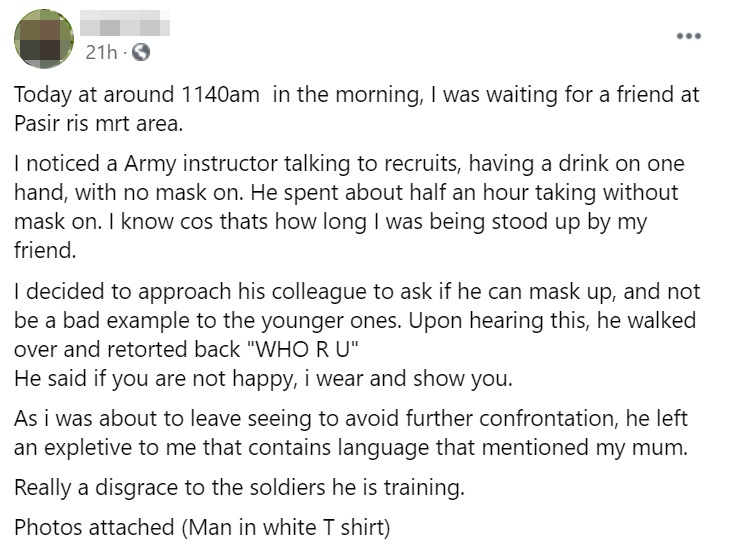 The SAF commander was alleged to have been speaking to his platoon for around 30 minutes with a drink in hand and without a mask over his face. The stranger watching the exchange approached the commander’s colleague and asked if the commander could wear his mask as he was setting a bad example for the younger soldiers.

Overhearing this, the commander approached the man and purportedly asked, “Who are you?”

The commander then said if the man was not satisfied, he’d wear the mask and show him.

Seeking to de-escalate the situation, the man was about to leave. But not before hearing the commander allegedly using an expletive involving the man’s mother.

Netizens have reacted strongly towards the incident. Many criticised the commander’s actions and conduct in front of his platoon of soldiers. 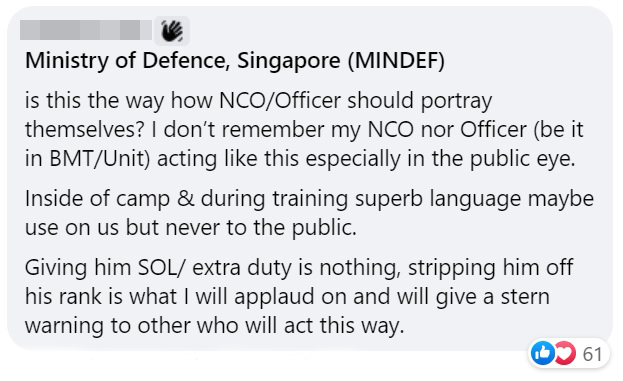 Another user was disappointed to see that someone in a position of authority in SAF setting a poor example for their soldiers. 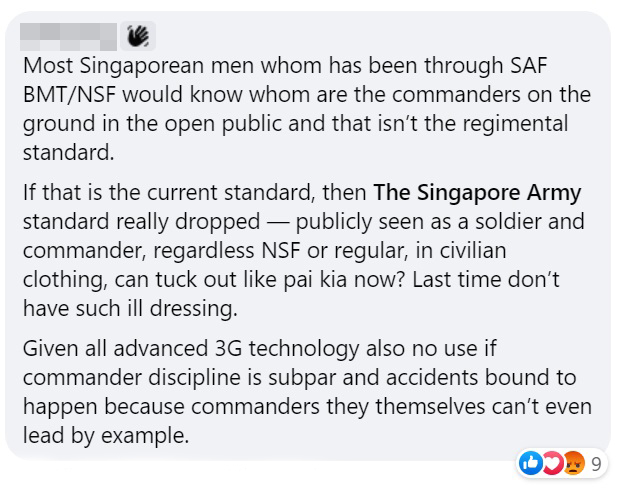 No matter the circumstance, reacting to a gentle reminder in such a manner shouldn’t be normalised, especially when Singapore is undergoing a spate of Covid-19 cases.

We’re glad that MINDEF has taken prompt action and will discipline the commander accordingly.

It remains imperative that we continue to mask up in public.