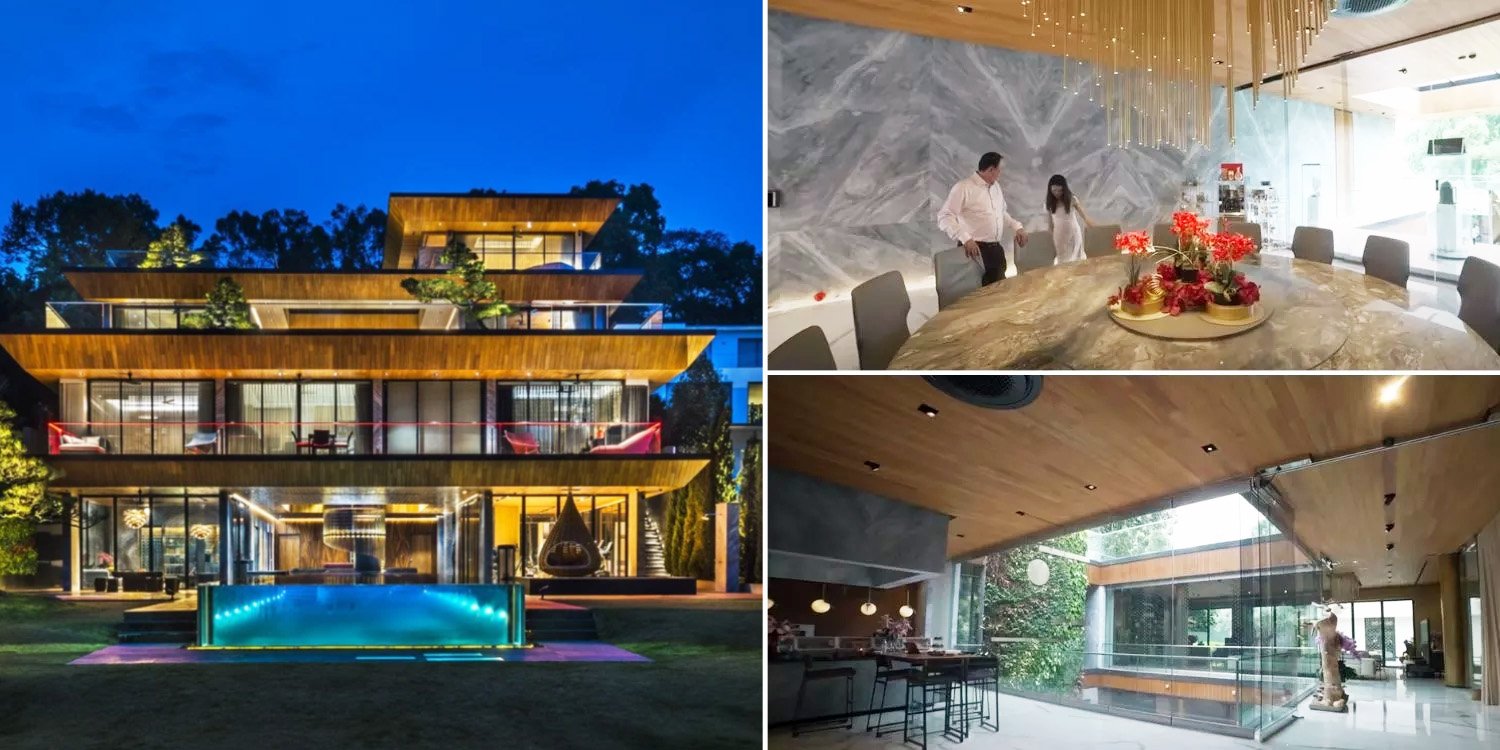 He says the abode is built for his neighbours too.

Sheng Siong supermarket is a well-known household name in Singapore. They’re recognised not only for their cheap deals, but their generosity towards their staff and the community.

Singaporeans also know that the chain’s revenue is soaring, with the Covid-19 pandemic pushing the founding Lim family’s fortune over $1 billion.

Since the company is doing so well, some might wonder how the family spends their riches. So for the 1st time, they’ve given the public a peek into their $32 million mansion. 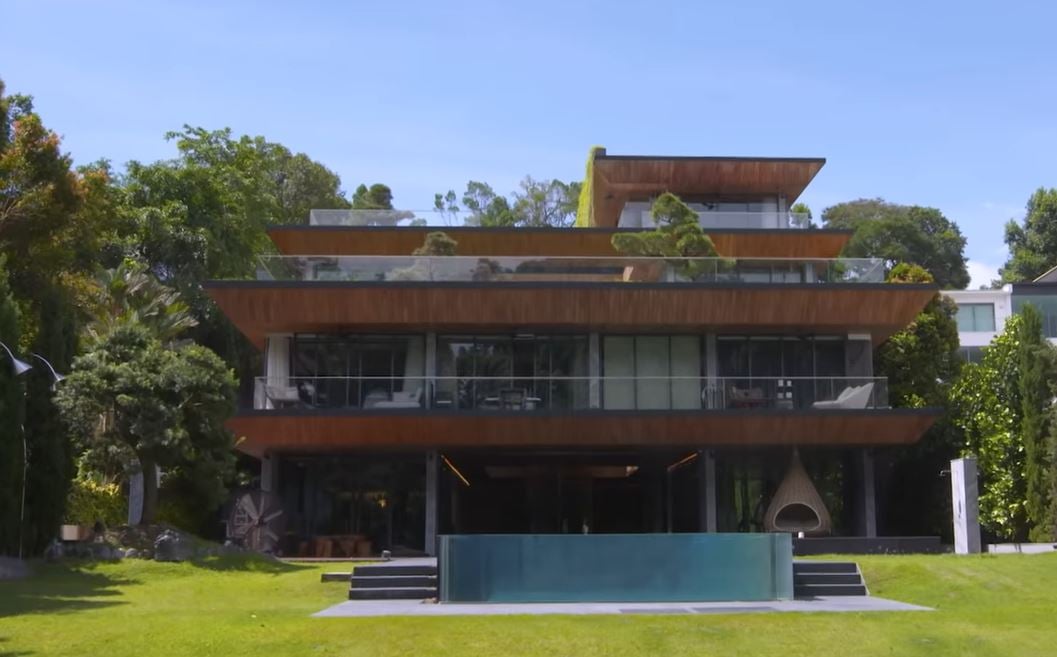 However, while some might expect opulence and even ostentatiousness, their abode only seems to reflect the family’s values of harmony and heritage.

And in keeping with their giving spirit, the mansion was built not just for the family, but for their neighbours too. Read on to find out why.

From the outside, the home seems to have a modern aesthetic similar to the “Parasite mansion”.

But unlike the iconic pad from the Oscar-winning movie, the Lim family’s home incorporates a colonial bungalow. 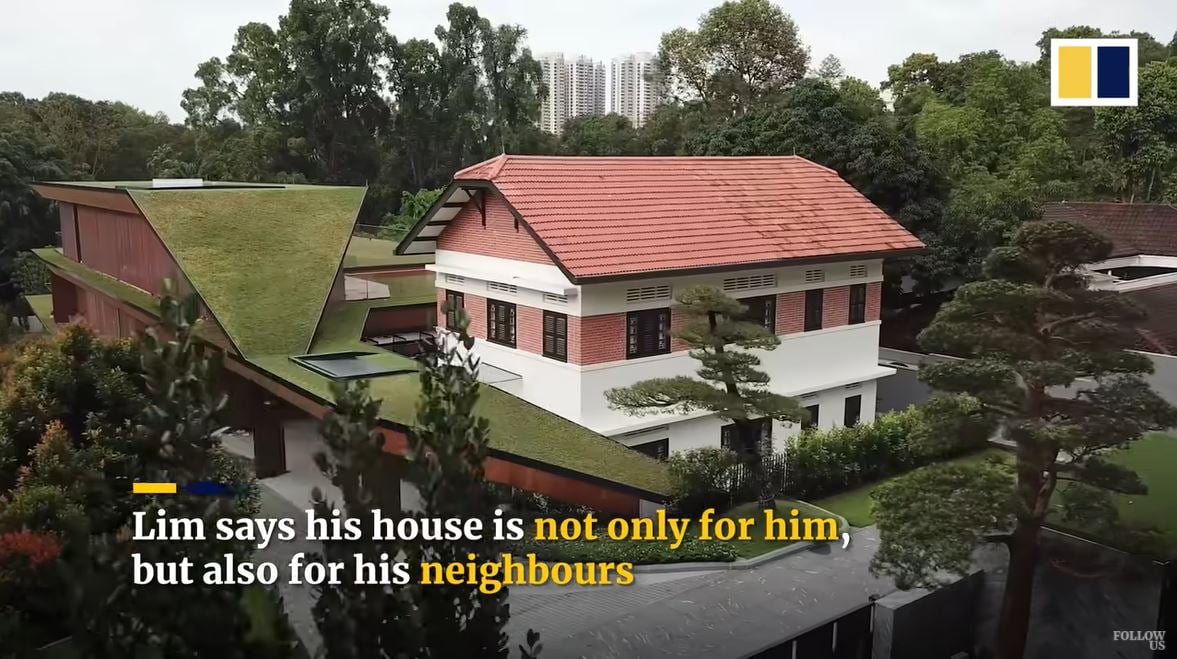 According to CNA Luxury, when Sheng Siong co-founder Lim Hock Leng first saw the land, only the old bungalow was there, with a massive empty plot of land next to it.

So he asked architects to preserve the bungalow but build an extension that blends in with the century-old house and their surroundings. 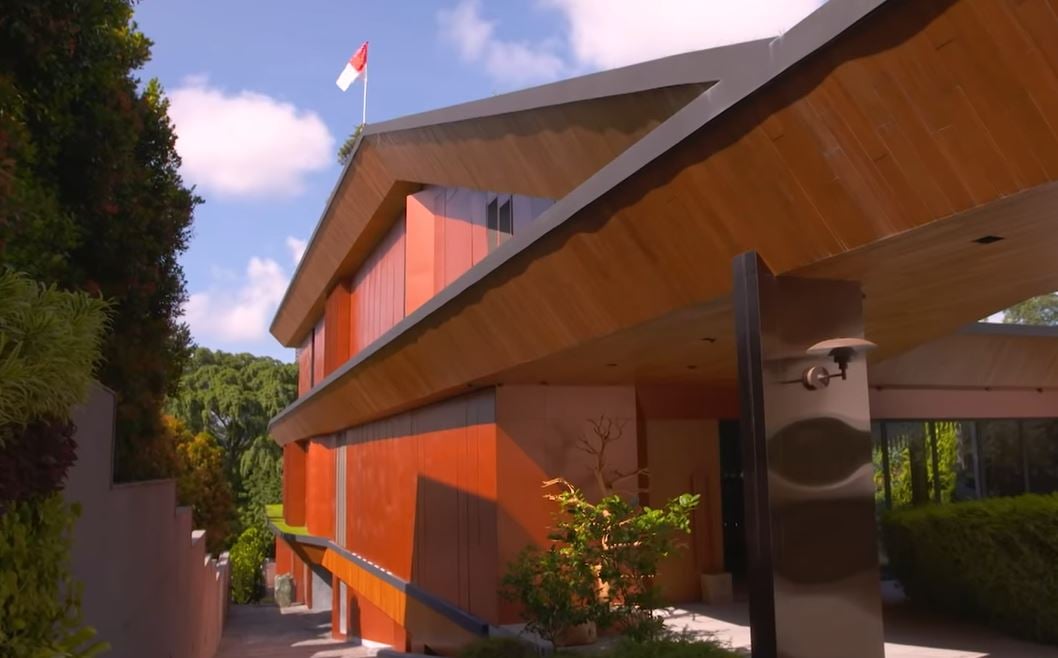 The result was a 33,700-square-foot mansion that can house multiple generations of the Lim family.

Main door handles in the shape of ‘Lim’

Entering the house via the main doors, you’ll know exactly whose place this belongs to. 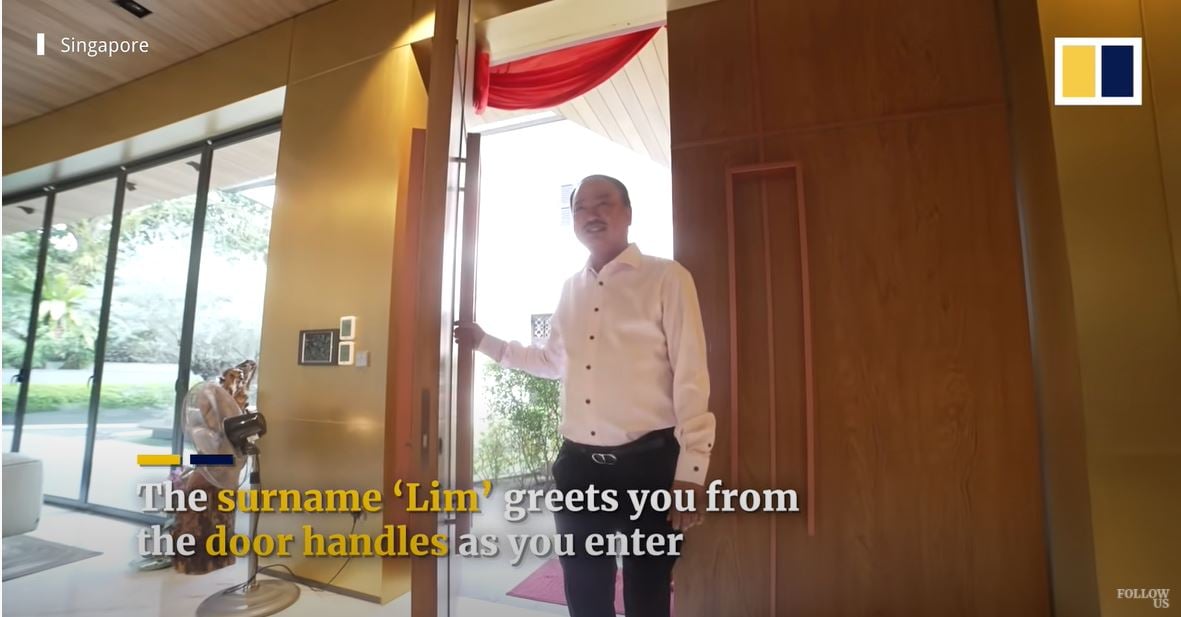 That’s because the 2 door handles form the Chinese character 林 (Lin), which is the family’s surname. 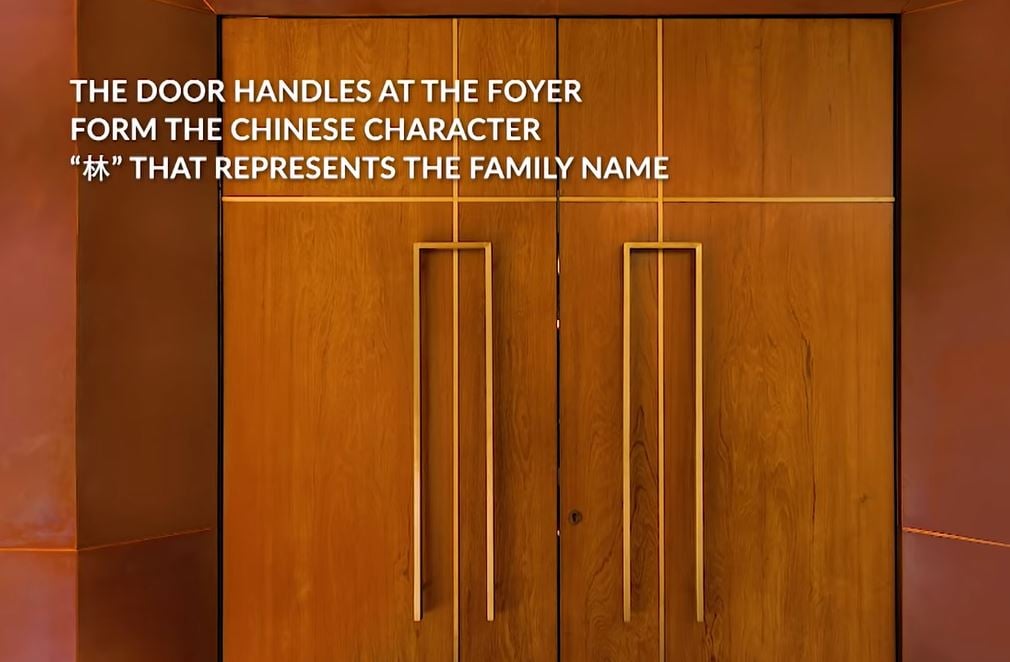 Once you’re in, you’ll be in a cavernous living space. Like many luxury homes, there’s a courtyard that lets in natural light. 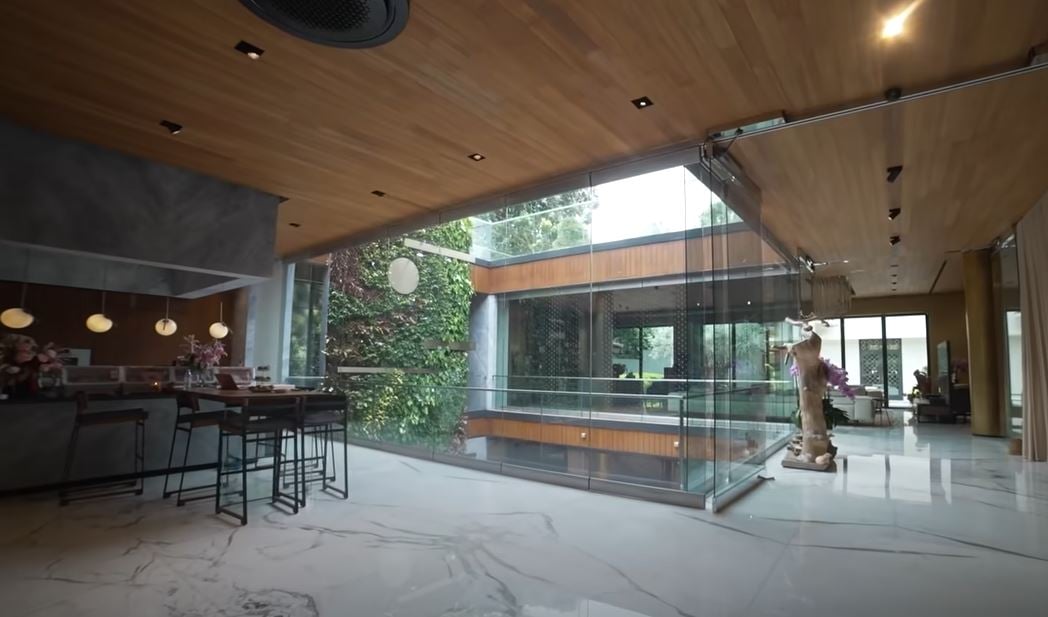 In fact, the house has 2 courtyards with air wells and greenery. One courtyard serves as the family’s main gathering area. 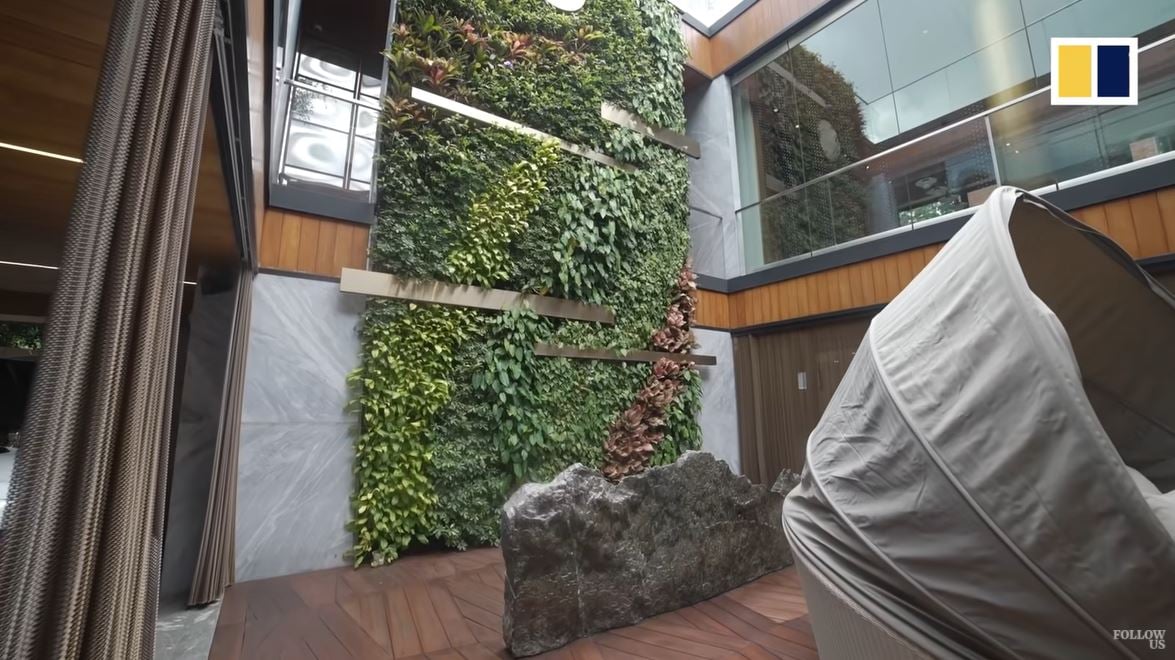 The rooms are also huge, luxurious and able to seat many people comfortably, as befits the living space of a multigenerational family. 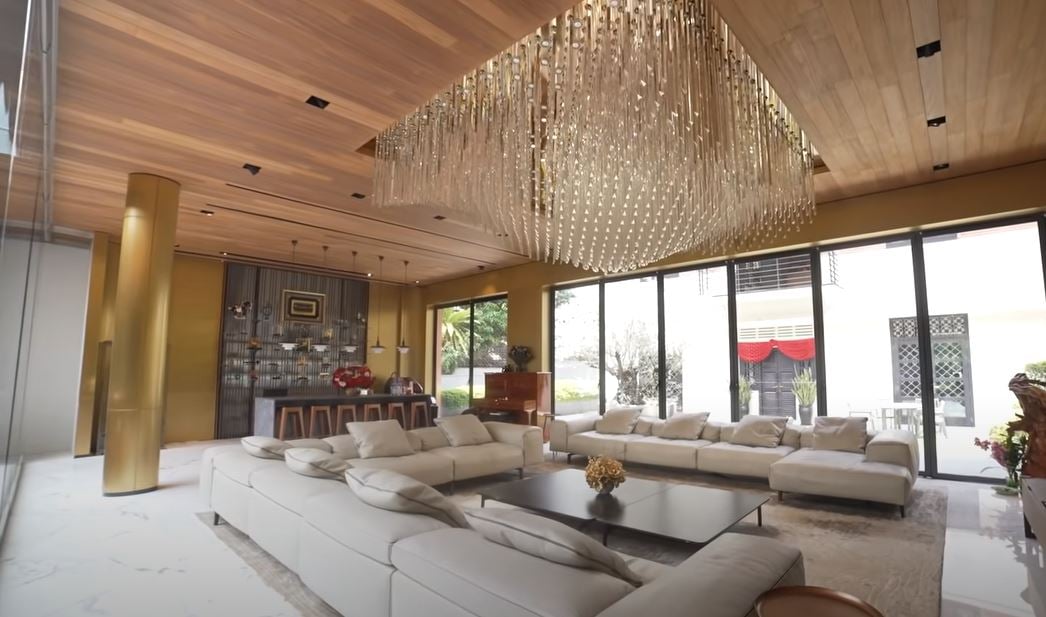 The Lim children have living quarters that can almost be separate apartments, tailored to their individual design preferences.

This is so that members of the family can have their privacy, but knowing that their loved ones are never far away. No matter which corner of the house they’re in, family members reunite around a sprawling dining table for meals together. There’s also an immense infinity pool in the basement. 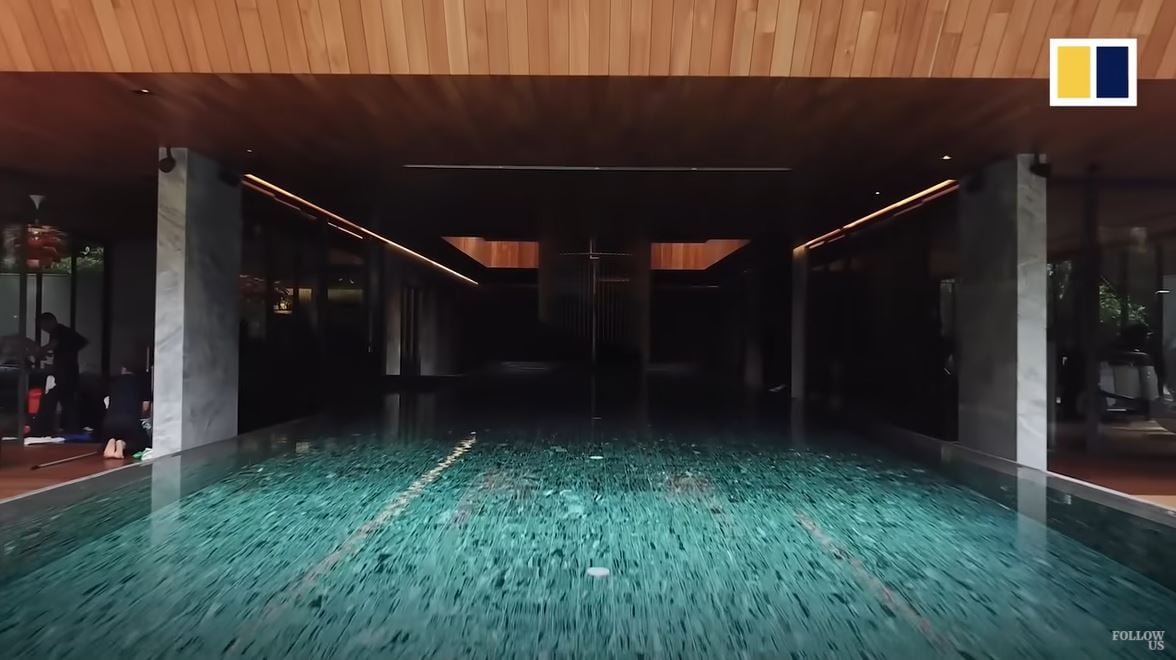 However, the Lim family home isn’t just about large rooms and splendor.

If there’s anything we know about the 3 Lim brothers who run Sheng Siong, it’s that they don’t shy away from telling people that they used to be pig farmers.

In fact, they’re so proud of it that reminders of their heritage are displayed prominently.

For example, a painting of their father, who was a pig farmer, takes pride of place at home. 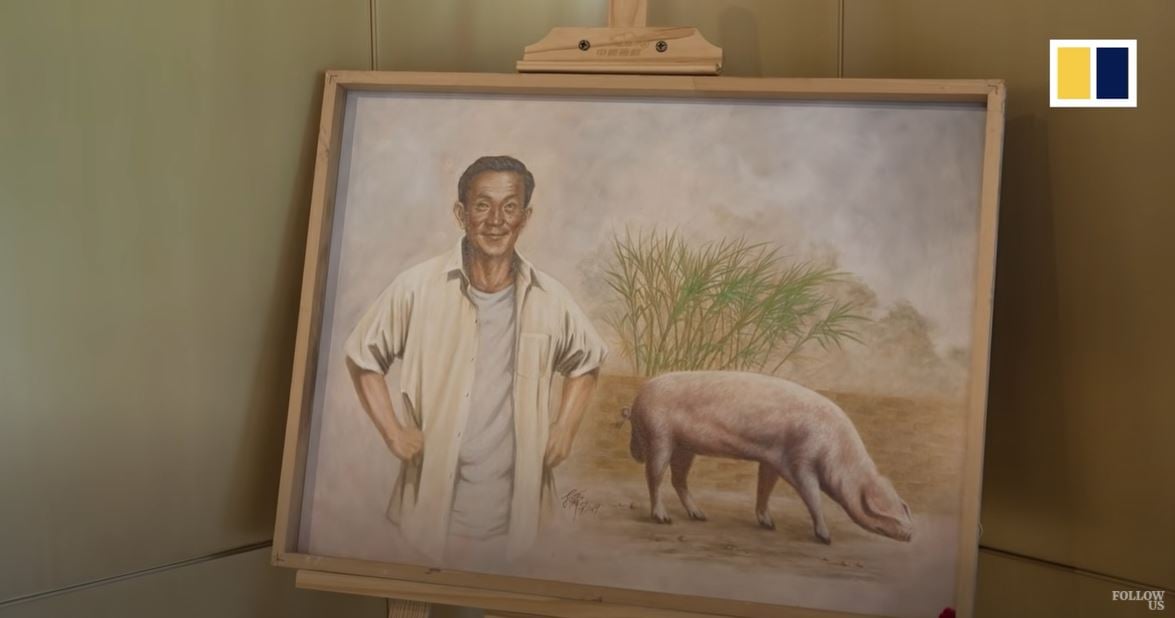 Another nod to the family’s background in pig farming is a wooden art piece of a pig, formed by about 4,500 blocks of timber. 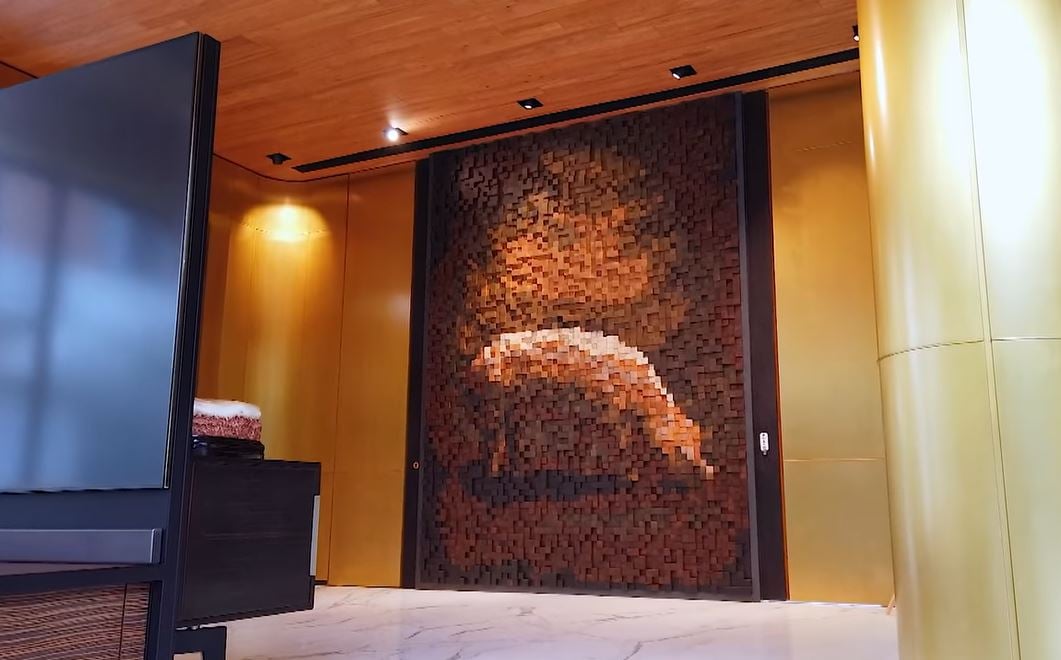 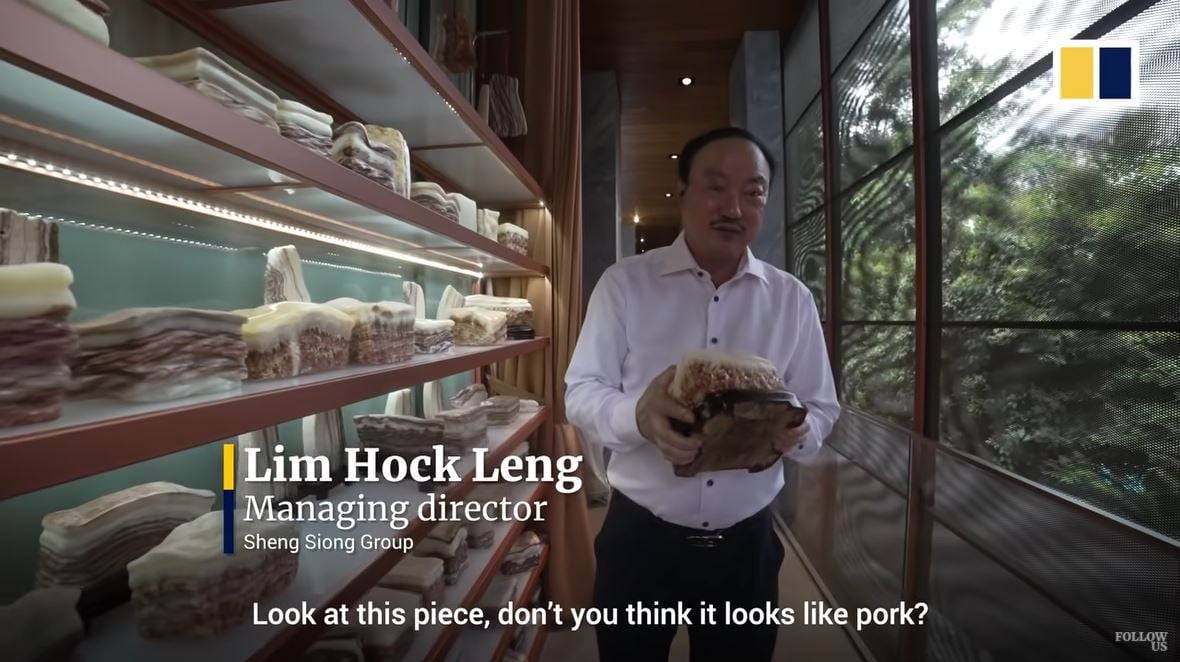 He told the South China Morning Post (SCMP) that he brought them back from Hubei province in China. A “slab” is hung in front of all the pork counters at Sheng Siong outlets, and they’re also given to guests as gifts. A symbol of family harmony

Besides their humble beginnings, the Lim family is also big on family harmony, especially since their company is headed by 3 brothers.

To symbolise this, a very special tree sits in one of the courtyards. The tree is “very meaningful” said Mr Lim, as upon closer inspection, you’d be able to see that its trunk actually has 3 parts. This represents the 3 Lim brothers doing business together.

When they work together, there’ll inevitably be disagreements, he said, but the brothers always seek to compromise for the sake of harmony.

This is also found in the tree, as there’s an empty spot in the middle of the 3 trunks. This epitomises the “common ground” the brothers will come to in order to agree with one another.

This way of solving problems harmoniously will benefit the business, he added.

The kampung spirit lives on

Even though the Lim family is worth more than $1 billion, it seems Mr Lim hasn’t let success get to his head.

He admitted to the SCMP that, having been poor before, spending $32 million on a house may be a bit “extravagant”. However, in a throwback to the pig farm days, he still has kampung spirit in mind when he conceived of the property’s design.

How does one live in a mansion and still have the kampung spirit?

By taking your neighbours into account – which is precisely what the Sheng Siong boss did by telling architects to build the house for his neighbours, not him.

The rationale is that his house will eventually become his neighbours’ scenery. Thus, he has to take into account what his 3 neighbours would see every day, and “add value” to their view.

On the flip side, if his house makes them feel uncomfortable, they would curse him every day, he cautioned.

An extension of family’s good values

From what we’ve seen of the Lim family abode, it’s not just a luxurious mansion but a tribute to their humble beginnings and extension of their good values.

That speaks volumes about their positive attitude towards their success and their place in the community.

It also cements the Lims as role models not just for Singaporeans who want to succeed, but how to live your life after you’ve achieved success.