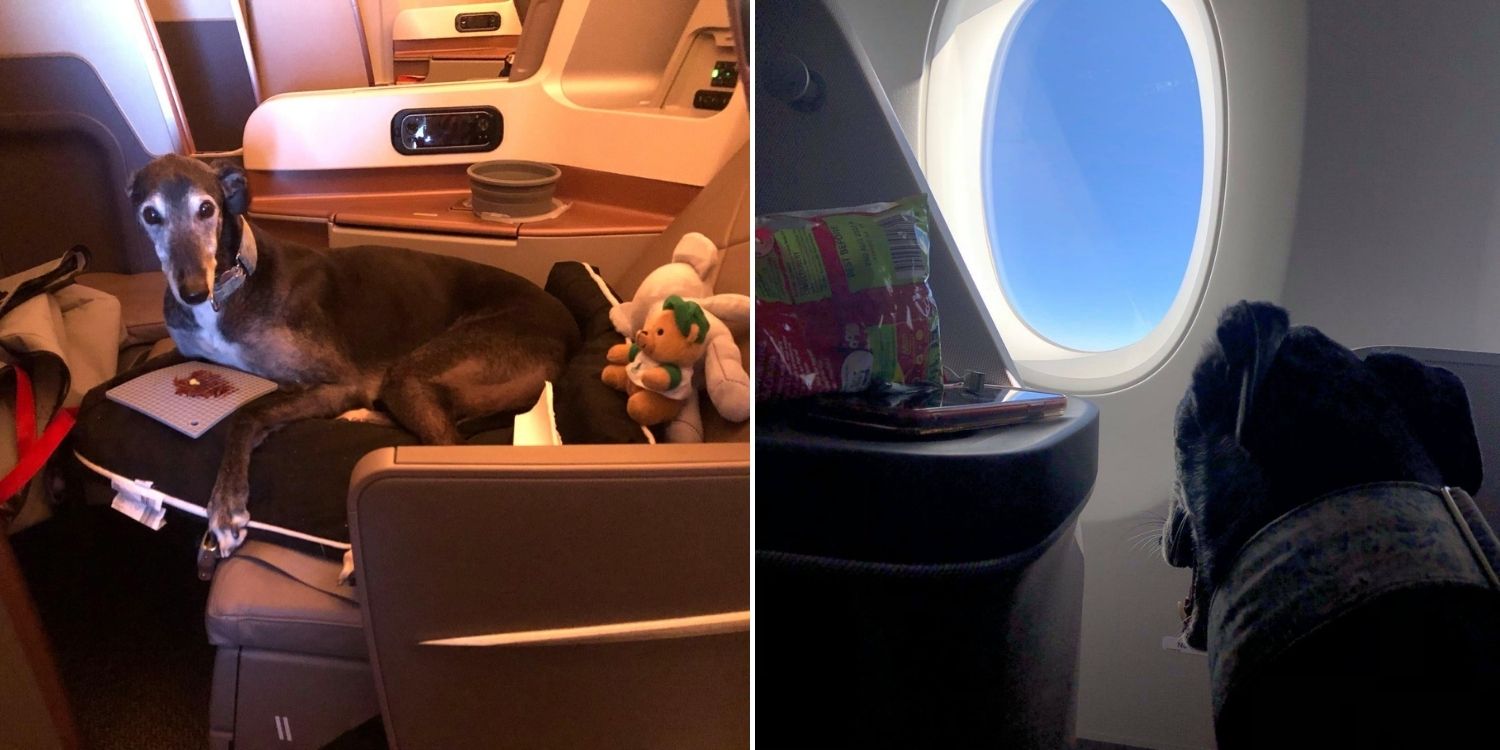 Thanks to Covid-19 travel restrictions, most of us don’t have a chance to travel right now.

A well-behaved doggo, however, not only got to fly with his owner in the cabin, but even enjoyed life in Business Class. 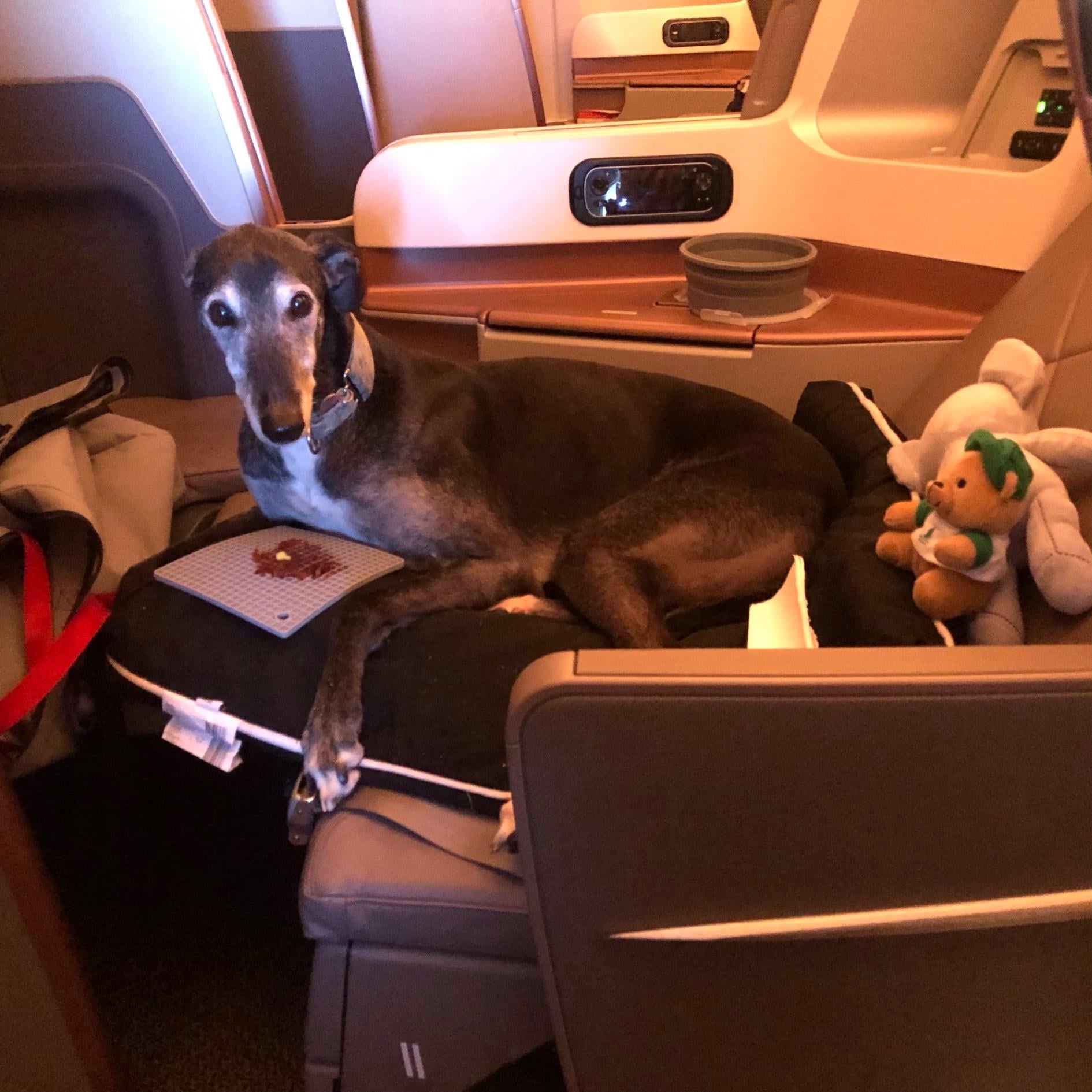 That’s a treat many (human) Singaporeans haven’t even experienced in their lifetime, let alone a dog.

Doggo doesn’t need to be human to fly SIA

Earlier this week, we reported on a lucky man who enjoyed an entire flight to himself.

Lewis the greyhound has now trumped that by not even needing to be human to relax in a cabin seat on SIA. 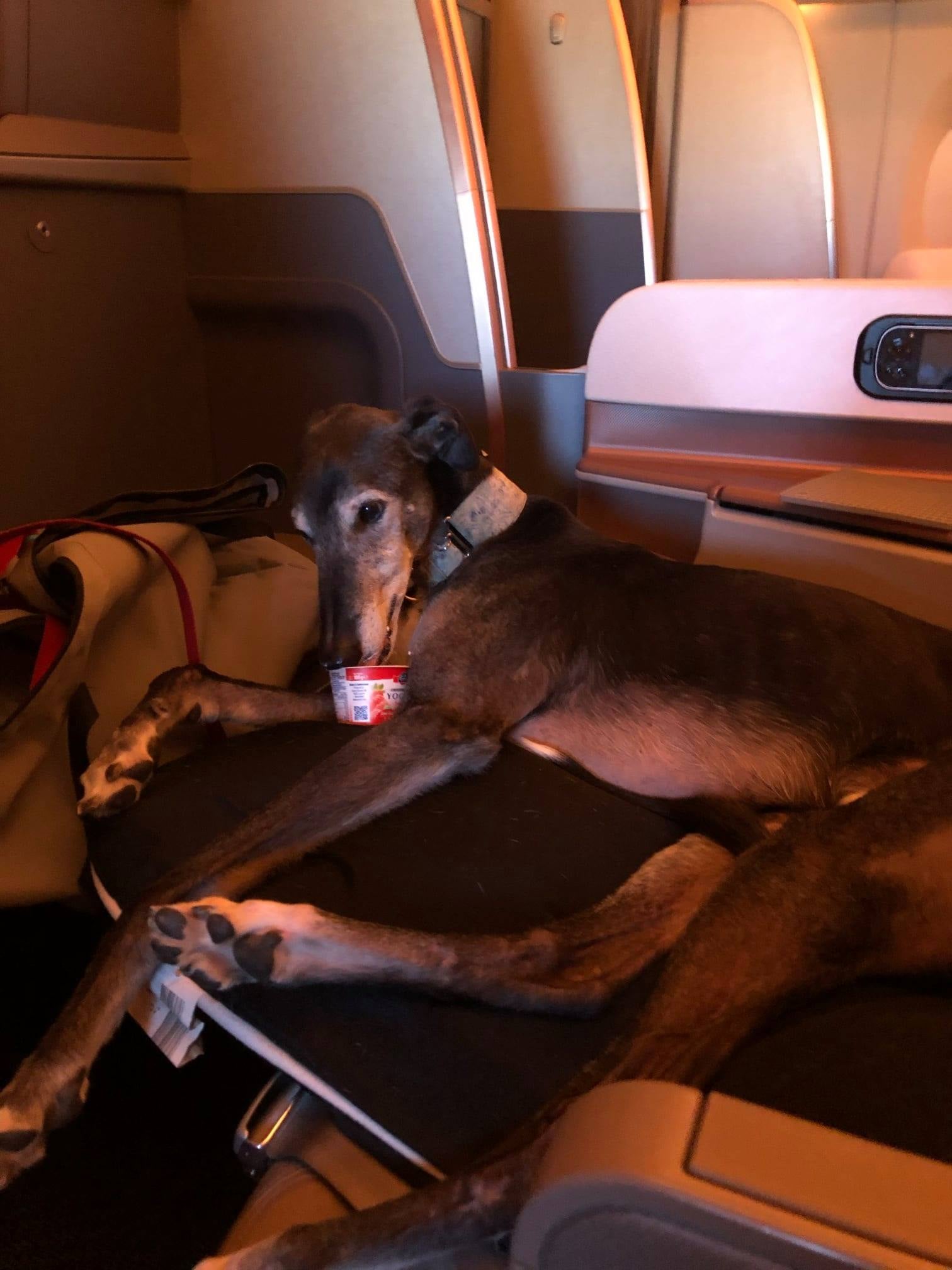 Greyhound moved to Italy with owner

The lucky dog’s tale was related in a Facebook post on 29 Sep by Greyt Greys Rescue, a charity that finds former racing Greyhounds homes in Australia.

After Lewis found a home with a nice woman, she moved to Italy last weekend, and brought him along.

SIA was her airline of choice, and she saved up for a seat in Business Class.

Normally, when animals fly, they’re made to travel in the cargo hold, or worse, cramped up together with the checked baggage.

However, because the flight was almost empty, SIA allowed Lewis to fly next to his owner in the cabin.

He proceeded to settle in really comfortably in Business Class. 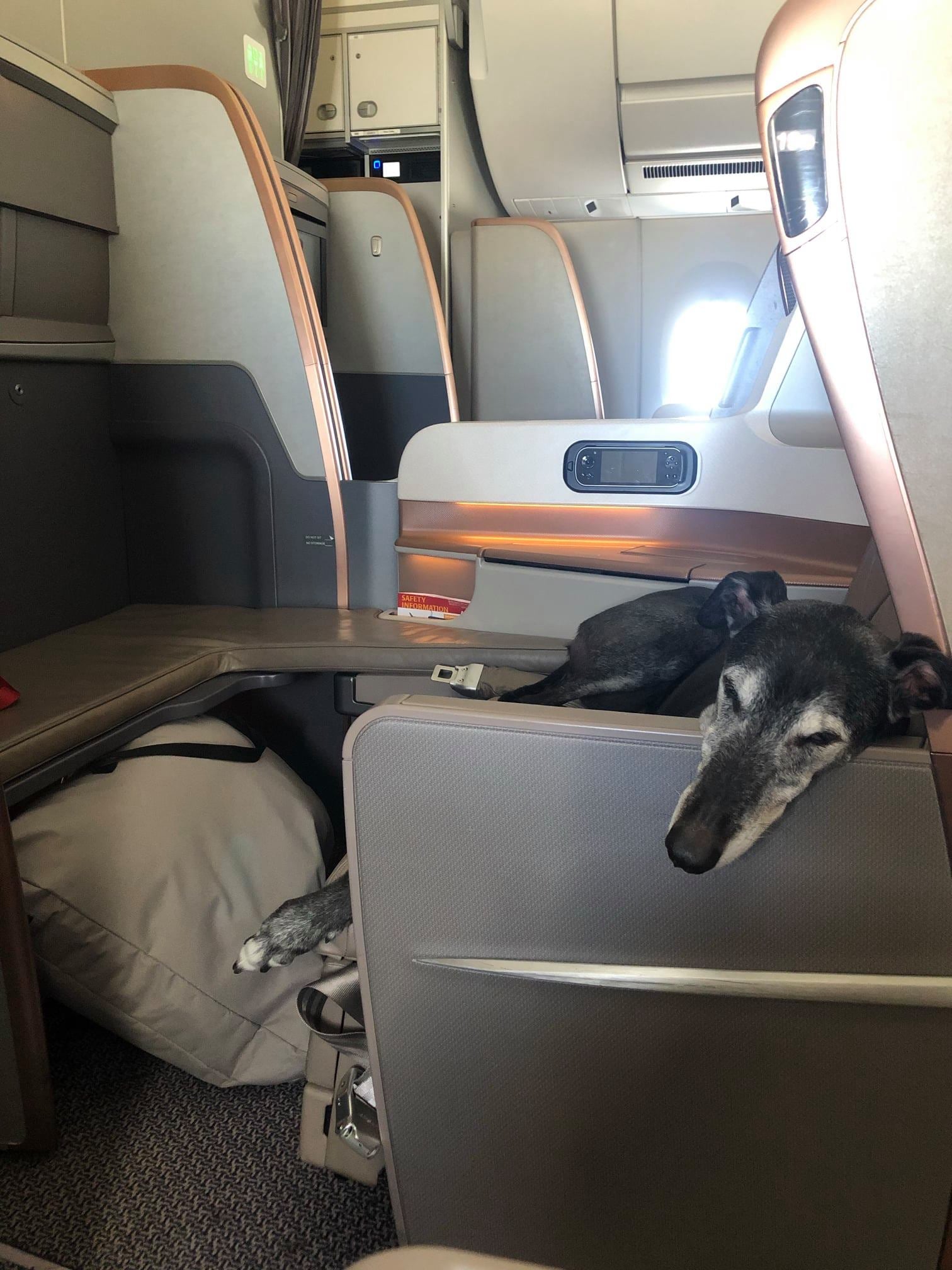 With the added room, Lewis had ample space to stretch out for a snooze. He even got a soft toy to cuddle with! 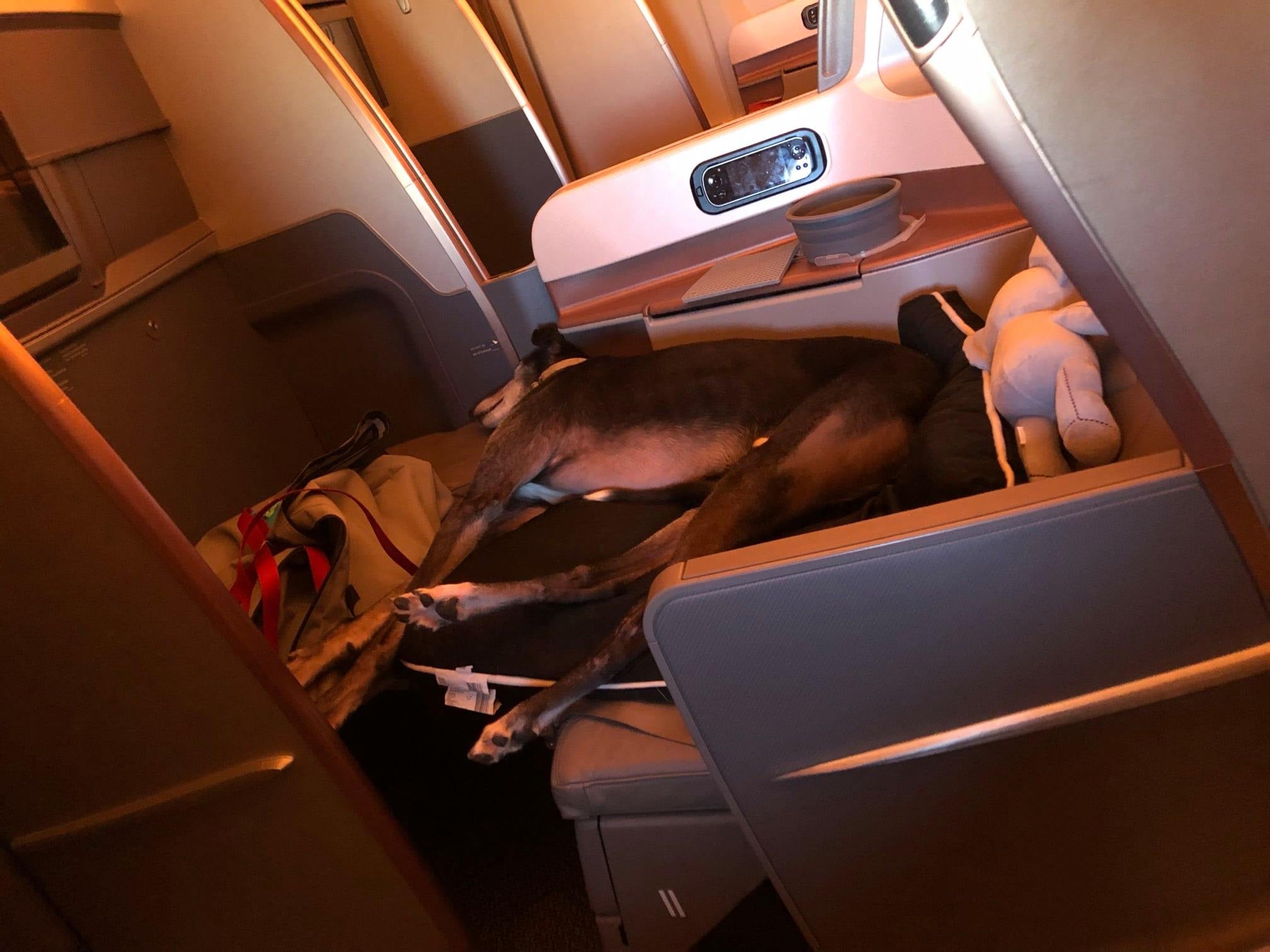 Of course, when people talk about SIA’s in-flight service, they don’t fail to mention their food.

And as a valued Business Class passenger, Lewis got to enjoy top-notch cuisine like strawberry yoghurt.

He even got to celebrate his birthday with cupcakes and a croissant. 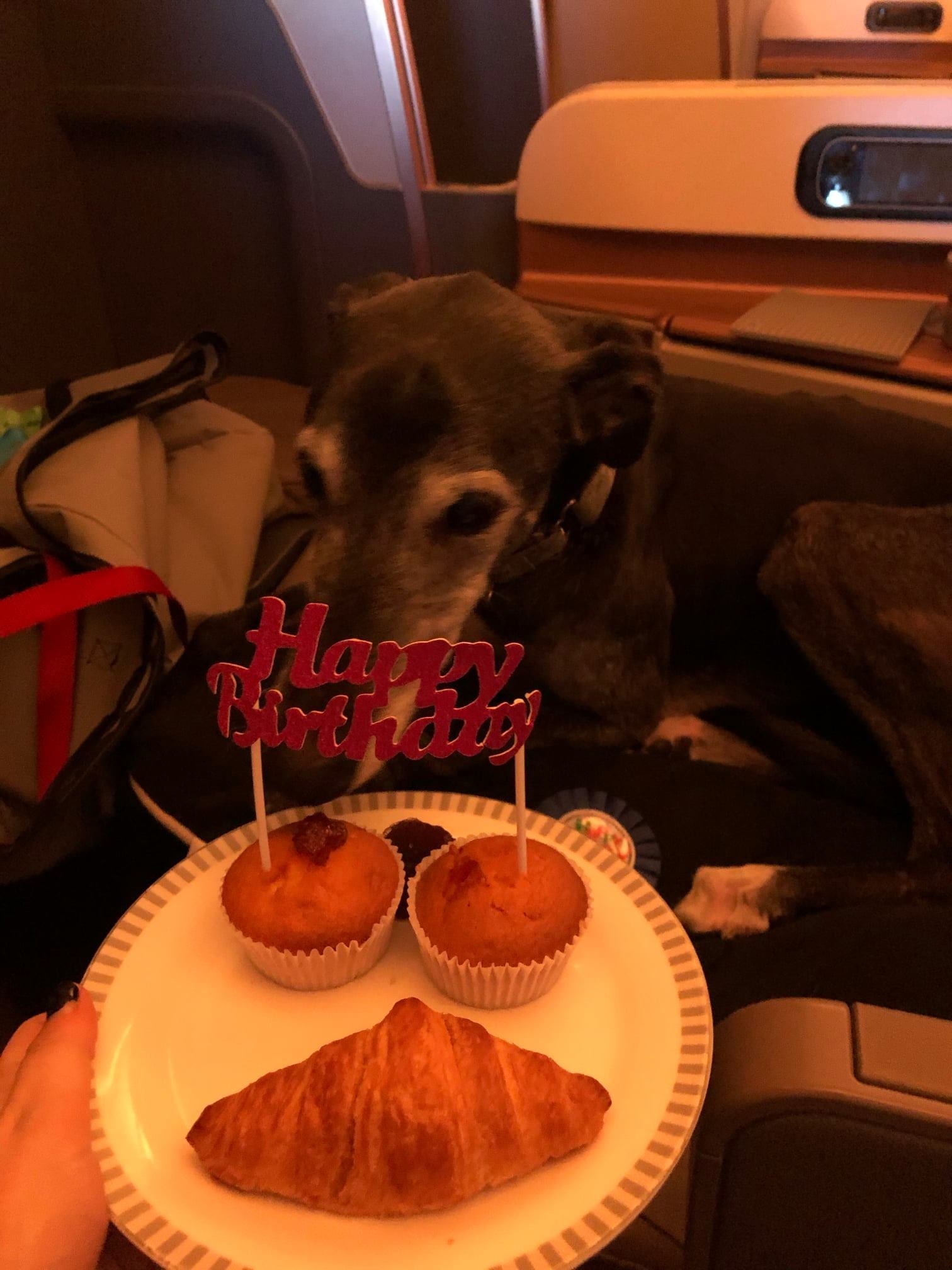 We think he obviously enjoyed wolfing them down. 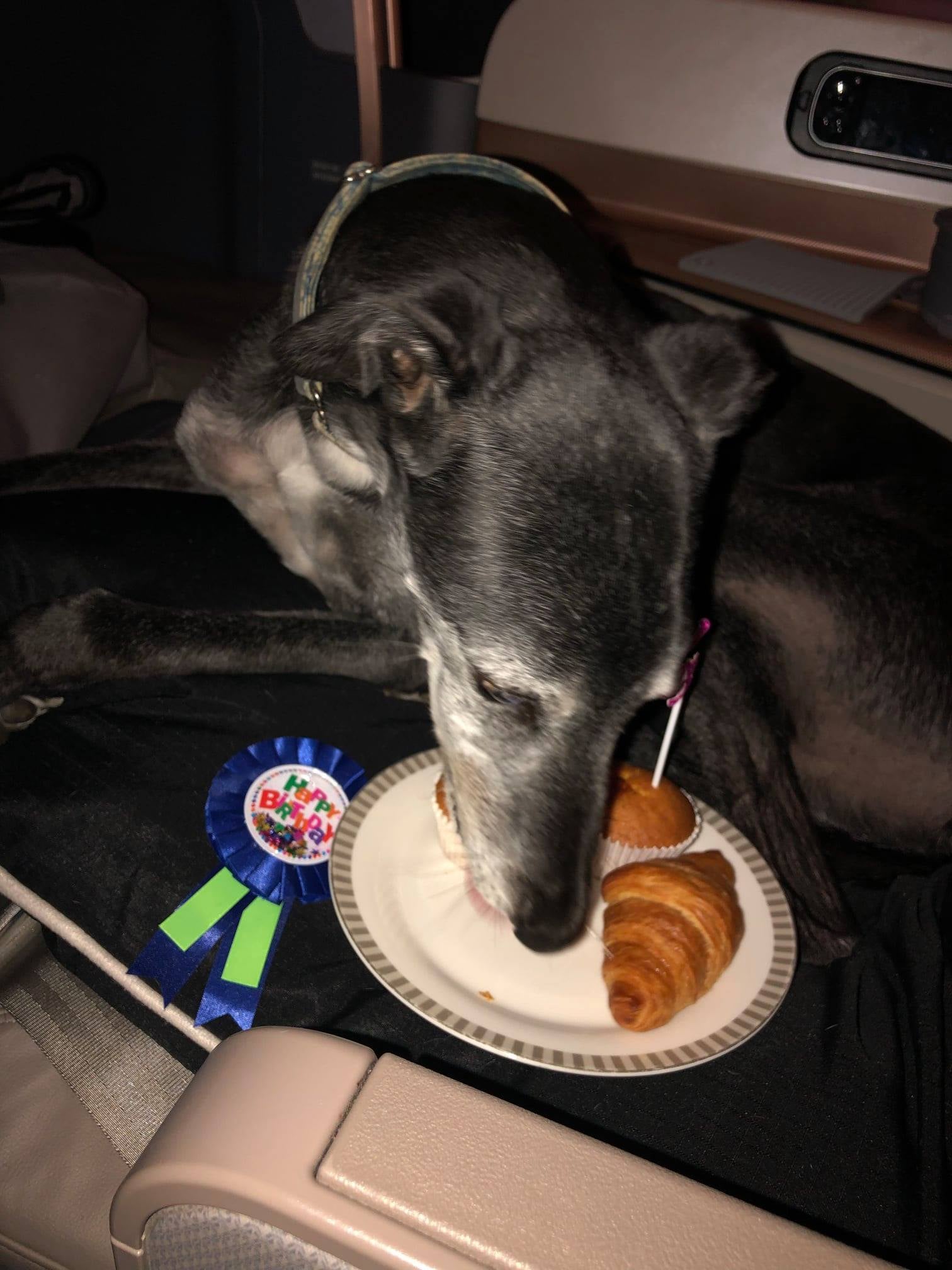 If that wasn’t enough, he got to share his “mummy’s” snacks too. 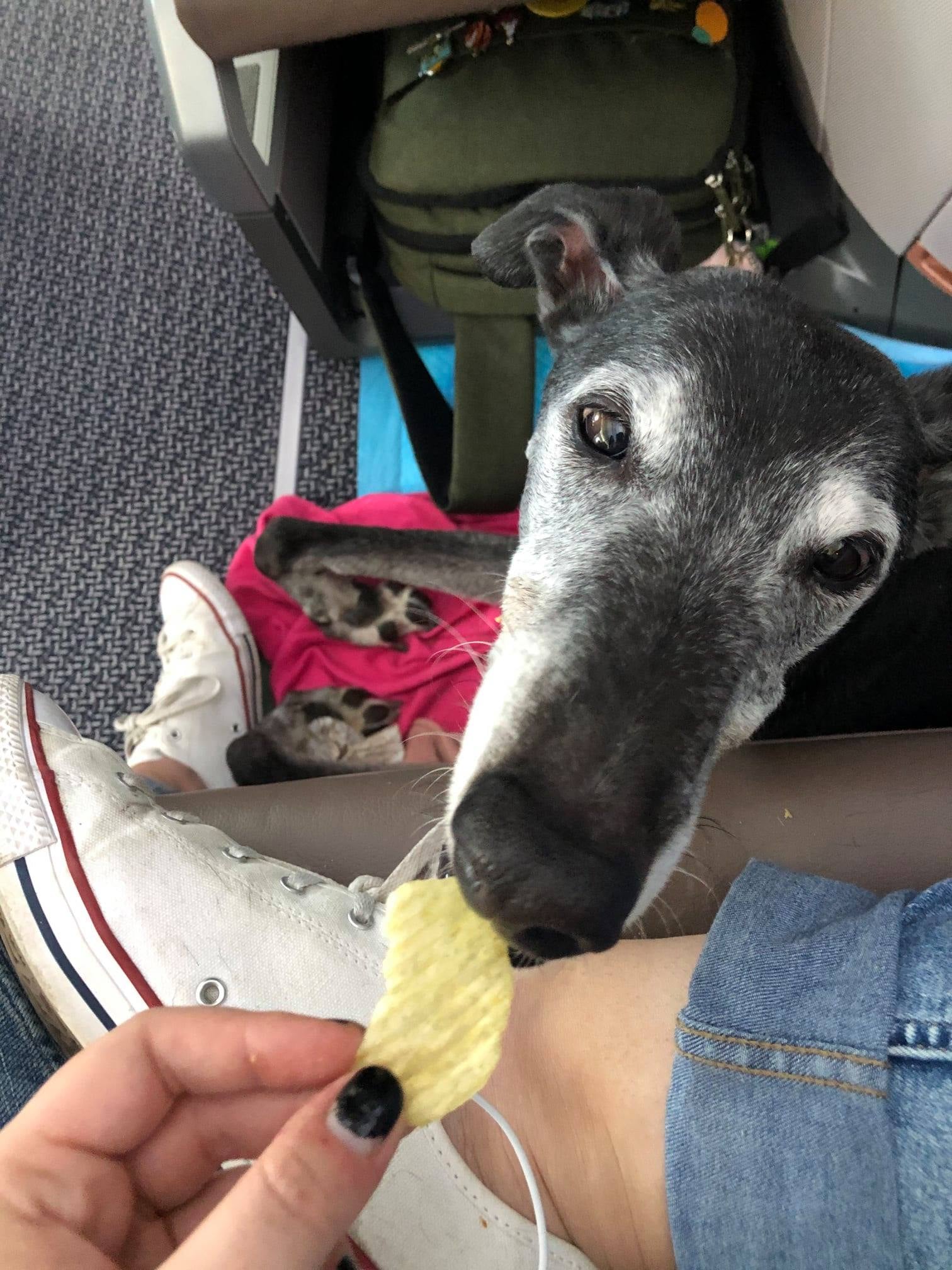 According to Greyt Greys, Lewis deserved every bit of the special treatment he got.

That’s because he was the goodest boy indeed and was on his best behaviour throughout the flight. 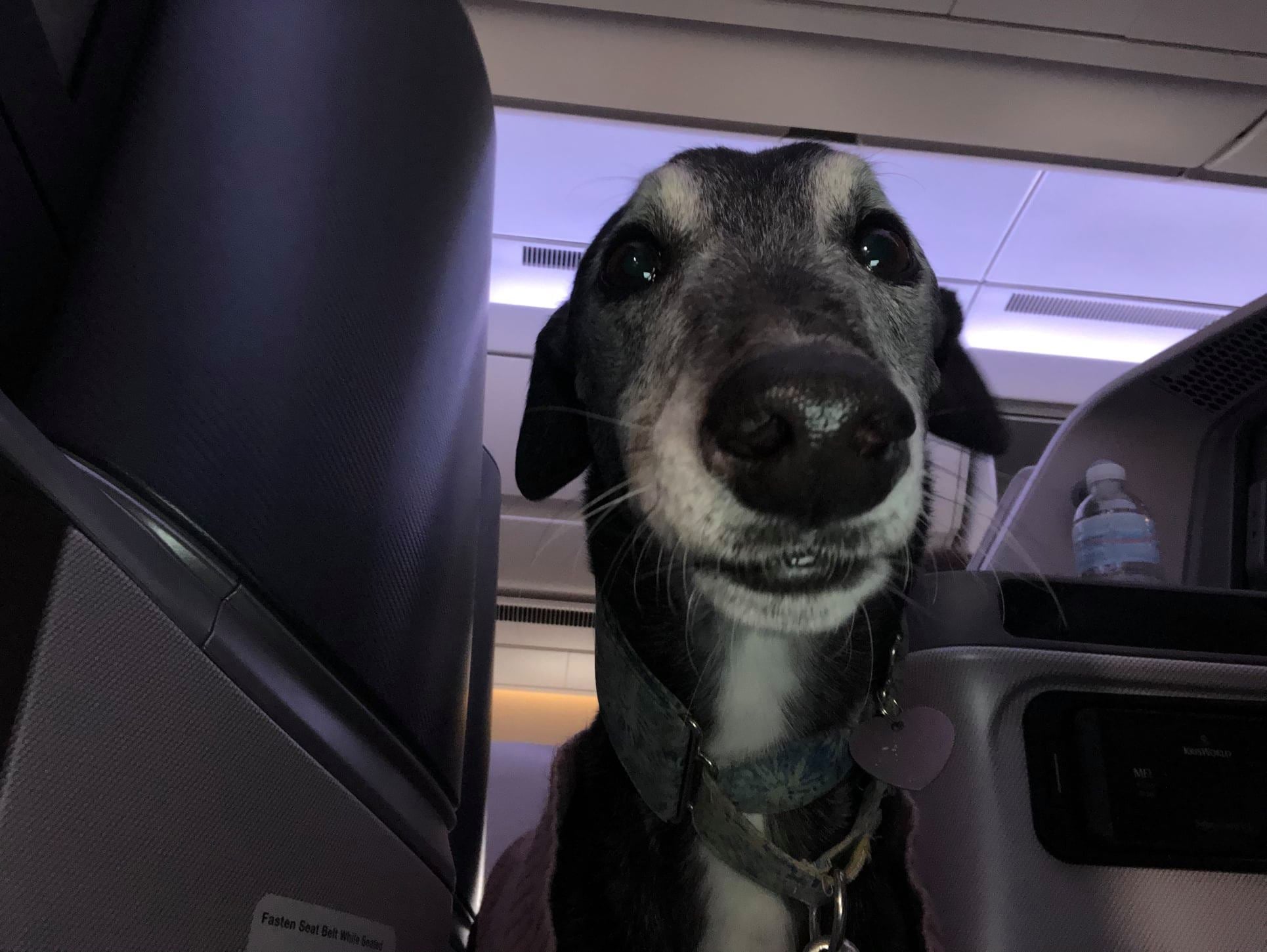 The SIA crew said he was the most well-behaved dog they’ve ever had – and this included trained service dogs.

No wonder they thoroughly spoiled him.

In fact, Lewis was likely more disciplined then some humans they’ve had on board.

Kudos to SIA for

Pet owners who love their furkids enough to bring them along when they move overseas would surely appreciate having them by their side for the journey.

So kudos to SIA for allowing Lewis to sit in the cabin with his owner – especially since he obviously deserved to be treated like a king for being so guai.

We’re sure it was an experience he won’t forget. 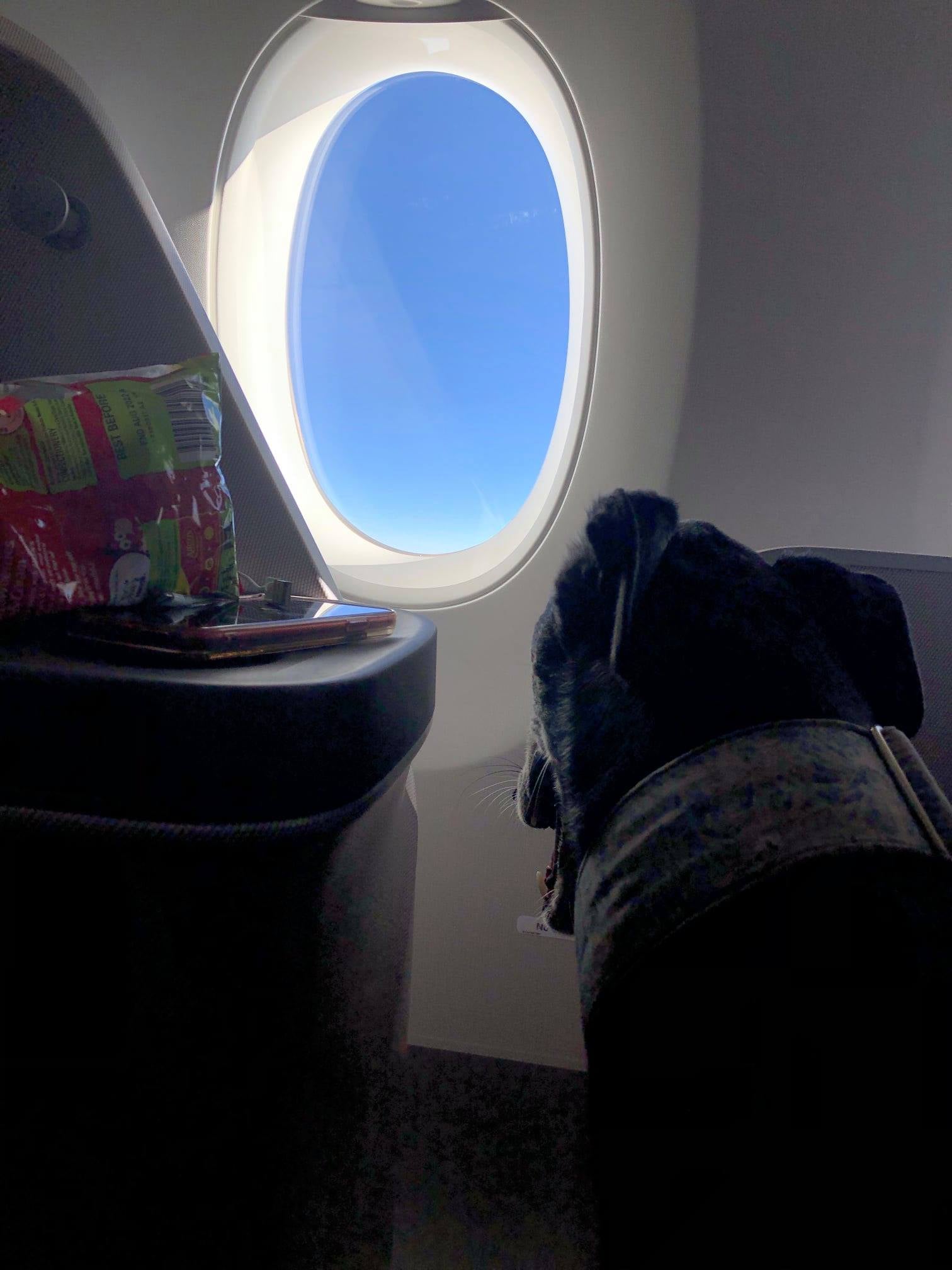 Now, if only we humans could be allowed to travel in the same way sometime soon.