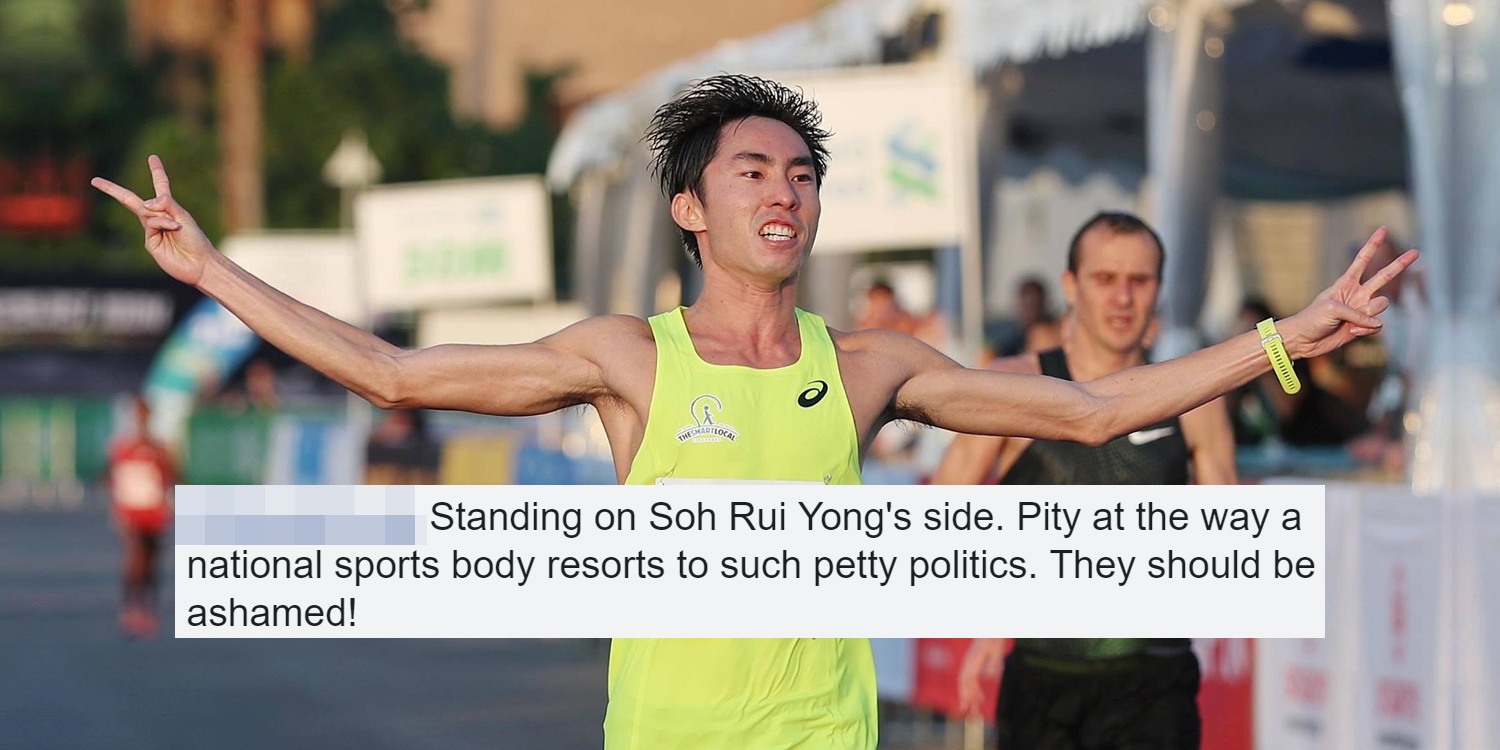 The 2019 SEA Games which will be held in the Philippines is just 3 months away. 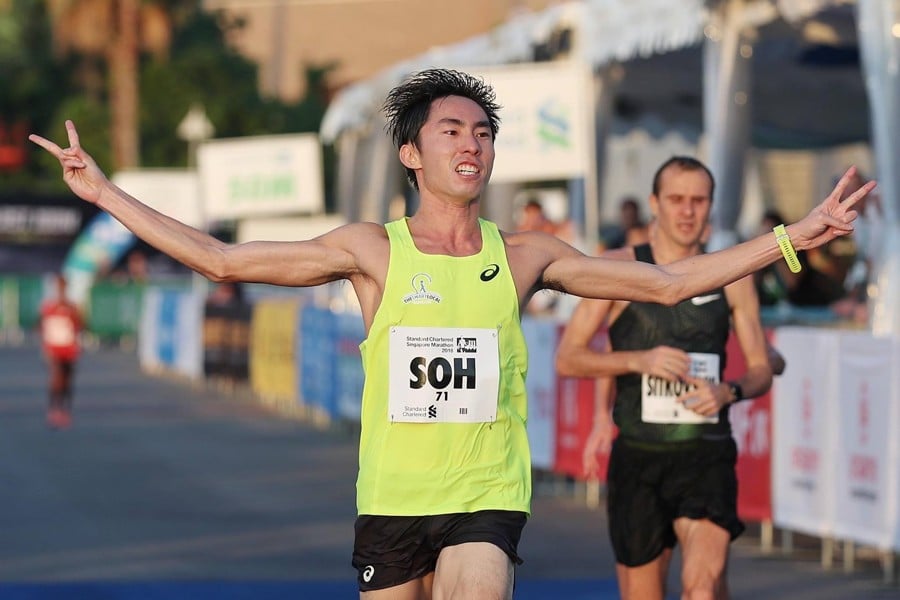 In response, Soh commented that the Council was behaving in a “petty manner” and compared it to “primary school playground politics”.

So why is Soh, a veteran national runner who recently won the Sundown Half Marathon in June, caught in this predicament?

Soh will not compete in the 2019 SEA Games

The SNOC’s omission means that Soh will not be able to achieve a hat-trick of consecutive SEA Games gold medals in the men’s marathon event.

The omission came amidst a defamation lawsuit filed by fellow runner Ashley Liew over “false” statements over an act of sportsmanship back in 2015.

Singaporeans’ reactions to the omission were mostly of shock and disbelief, but here’s the play-by-play of events that led up to this decision.

During the 2015 SEA Games held in Singapore, several runners reportedly took a wrong turn at the men’s marathon finals.

Liew, one of the runners who participated in the event, allegedly slowed down and waited for his other competitors to catch up. He was awarded numerous awards for his act of sportsmanship.

However, his account was disputed by several members from the athletics scene, one of which was Soh, who calls the widely publicised story “untrue“.

Soh’s statement was backed up by several runners, including Rafael Poliquit from the Philippines. He was one of the runners in that race.

In April this year, the SNOC issued Soh a letter demanding that he retract his statement.

SNOC also claimed they found 4 other witnesses who saw Liew slow down to allow for the other runners to catch up.

2 months later, Liew sued Soh for defamation and demanded $120,000 in damages. The case is ongoing at the time of this article.

On Thursday (1 Aug) the SNOC issued a statement revealing that they had rejected Singapore Athletics’s nomination for Soh’s participation in the 2019 SEA Games.

SNOC’s statement said that its athletes are seen as role models for other young athletes and that Soh’s “behaviour” since 2017 has “fallen short” of what’s expected from them.

In response, Soh issued a statement on his personal Facebook page, slamming the SNOC for behaving in a “petty manner”, and compared it to “primary school playground politics”. 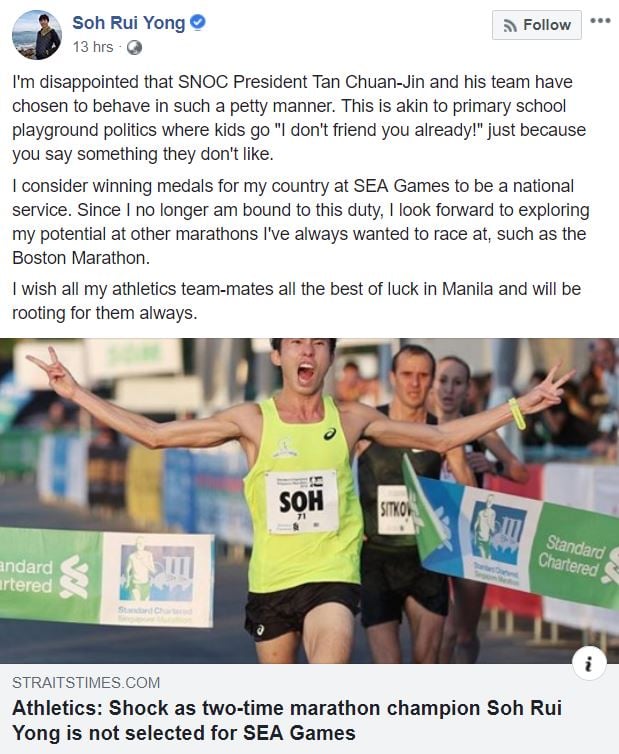 In an exclusive interview with MS News, Soh said that Singapore’s sports scene is unlikely to see any “meaningful progress” if the SNOC persists in this way.

He also reshared an article written in Aug 2017, where he was praised by an Indonesian runner for displaying sportsmanship.

Singapore will be sending its largest overseas contingent for this year’s SEA Games held from 30 Nov to 11 Dec.

Singaporeans are shook by SNOC’s decision

Singaporeans reactions to SNOC’s decision were mostly that of shock. Many also disagreed with the Council’s decision.

This netizen thought the SNOC ought to be ashamed for resorting to “petty politics”.

One netizen shared that Singapore will never achieve greatness if the mavericks’ opinion are not heard.

Another netizen thought that the SNOC should not punish Soh when the lawsuit has not been concluded.

This netizen, however, thought that athletes’ conduct should also be taken into consideration when they are representing their countries.

Petition started for Soh to be allowed to represent Singapore

Yahoo News reports that there’s now a petition set up in support of Soh. A netizen named KM Chia created the petition in the hopes that Soh will be “reinstated for the SEA Games” and have a chance to represent Singapore.

The petition has close to 200 signatures at the time of writing, and you can sign it here if you support his cause.

Hope Soh and SNOC will reach an amicable solution soon

Regardless of which side you’re on, it’s tragic that an athlete of Soh’s calibre is not allowed to compete for his country in a sporting event that he excels in.

We hope Soh and SNOC will reach an amicable solution in due time.

What are your thoughts on this entire saga? Share them in the comments below.