Family Of 6 Loses Mum After Spinal Injury, S’poreans Seek To Raise $50,000 For Them A mundane activity such as going to the toilet is something that we do not think twice about.

For a mother of 5 however, it turned out to be an unfortunate and tragic accident. She ended up falling down and injuring her spine.

Due to the severity of her injuries, the Nee Soon resident was recently declared brain dead. 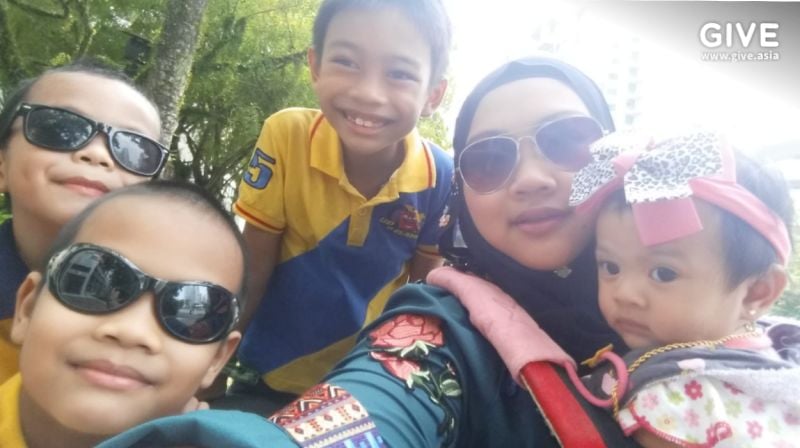 Singaporeans are now banding together to help raise $50,000 for the family, who require financial support after this tragedy.

Mother had spinal injury after falling in toilet

According to the family’s background story on GIVE.asia, the woman, who was having a confinement at home, sustained a spinal injury when she fell in the toilet.

The injury was so serious that she was subsequently declared brain dead.

Her husband, Eddy, now has to raise his 5 young children on his own, with the youngest being only 2 months old and his oldest 9 years old.

Father worries children will quit school in the future

Eddy will have to make ends meet on a monthly gross income of $2,400 as a mechanic mover.

After forking out for his children’s childcare and school fees, and paying for living expenses, he barely has any savings left.

His primary concern is that he will not be able to afford his children’s education when they are older, causing them to quit school.

A kind Samaritan by the name of Jin Feng started a fundraising campaign on the charity Giveasia Kindness to crowdfund $50,000 for the family. 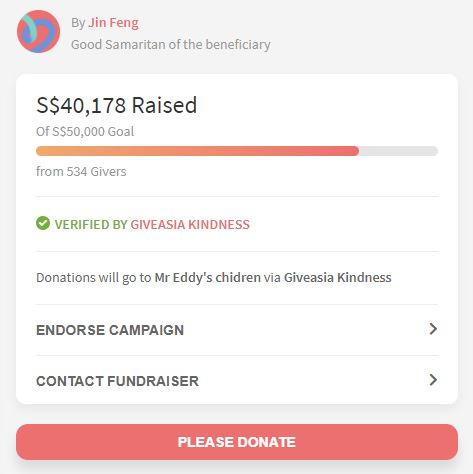 At time of writing, Singaporeans have banded together and raised $40,000 so far to help a fellow citizen in need.

All the funds raised will be channelled into an endowment policy that is managed by the charity. It will be used for the educational needs of Eddy’s children when they are older.

A parent gone too soon

It is heartbreaking when an unexpected tragedy hits a family and a parent is gone too soon.

However, a spirit of community like this will alleviate the burden of Eddy and set an example for Singaporeans to continue to help the less fortunate.