UPDATE 23/7: MOE has made the following statement with regards to the allegations, in response to TODAY’s queries,

We would like to clarify that MOE was neither involved in nor informed about SJI’s deliberations on the TEDxYouth@SJI programme and selection of speakers. The school has full authority to make such decisions on its own. [There are] no MOE regulations that are either applicable or used in this instance.

Singapore’s lesbian, gay, bisexual and transgender (LGBT) community appears to have taken another beating, just one day before Pink Dot.

The Inter-University LGBT Network alleges that the Ministry of Education (MOE)’s regulations prevented an activist from speaking at a TEDxYouth event at St Joseph’s Institution (SJI).

The Network’s Research & Advocacy Director Ms Rachel Yeo had been invited to speak at the event on Friday (20 July). But the day before, Ms Yeo was informed that she could not speak because of “MOE regulations”.

Ms Yeo had planned to speak on the importance of listening and constructive conversation.

It is unclear what specific MOE regulation prohibits the discussion of LGBTQ+ issues.

Its statement also blasted the ministry for its actions, saying that they contradicted the Government’s official stance that the LGBT community is not discriminated against in Singapore’s schools. 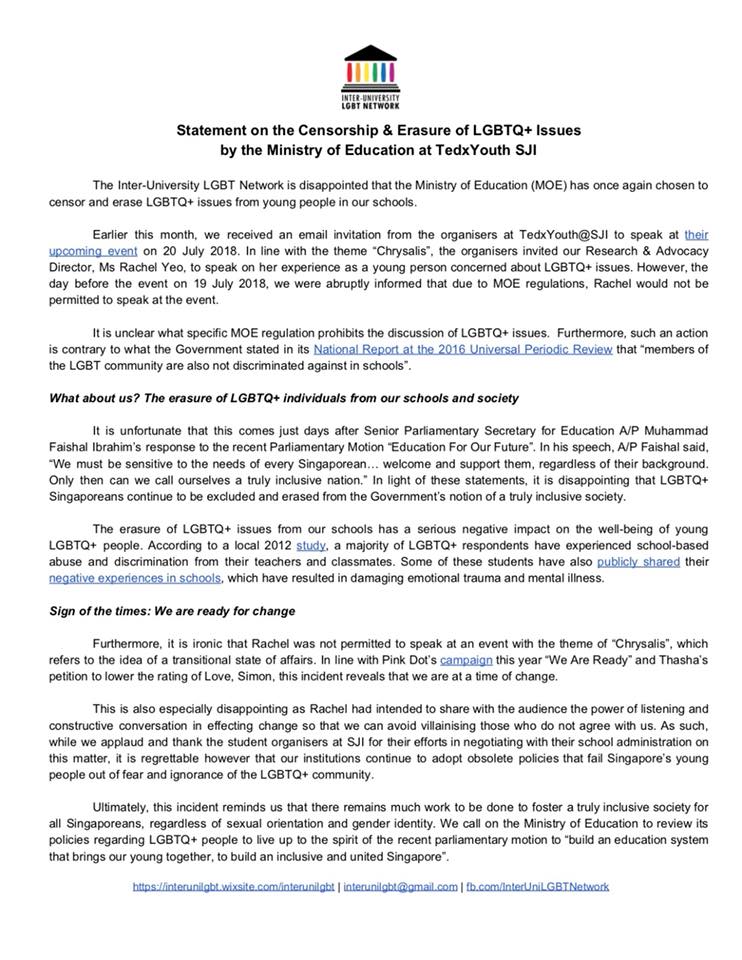 MOE’s alleged involvement in the event was ridiculed online, with some netizens calling for organisers to “ignore” the ministry’s regulations.

An SJI allumni expressed his disappointment at the school administration.

He also had some advice for student organisers of the TEDxYouth event:

I would encourage (them) to have a good talk with their administration on the values they want to prioritise in this crisis.

Service and community are fundamental Josephian values and I see no better time to fully commit them.

Did the choice of school matter?

It’s interesting that this debate is taking place around one of Singapore’s most religious schools. Although it brands itself as a secular institution, SJI is a deeply Catholic school, with traditions that include morning prayers and celebrations of Catholic feast days.

Despite its religious background, SJI prides itself as a forward-looking institution. For instance, its job ads require teachers to be open-minded. Homosexuality is also discussed in the school’s religious and moral classes.

SJI alumni were also heartened at the efforts of SJI students to create a more progressive school environment.

I am so encouraged to see the students playing a proactive role in affirming LGBT+ identities. I have always looked back at my SJI days with sadness because of the school’s pervasive focus on reinforcing masculine norms. This is definitely a sign of shifting hearts and that is always encouraging.

MustShareNews has reached out to MOE and SJI for comment.

Only TraceTogether App Or Token Can Be Used To Check In From 1 Jun, Singpass Won’t Be Allowed