A week into April and we’ve gotten our fair share of afternoon thunderstorms. While they bring shiok weather, they can cause road hazards, too.

Earlier today (5 Apr), a video on social media showed a tree falling onto the middle of the road in Lim Chu Kang, disrupting traffic.

But thankfully, 4 passengers from the nearby bus and 2 cyclists braved through the storm and helped clear the way for traffic.

At around 2.30pm today (5 Apr), the Facebook video shared by ROADS.sg shows a tree abruptly falling across the junction of Lim Chu Kang Road and Ama Keng Road. 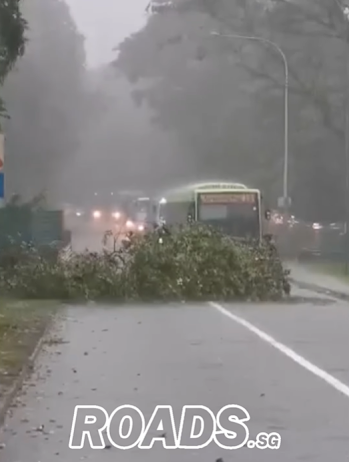 As a result, traffic flow was disrupted with many cars lining up behind the fallen tree.

It appeared as though the bus would be stuck, unable to pass.

However, just as the situation seemed to be at an impasse, a group of passengers from bus 975 and some cyclists alighted to remove the tree.

After approaching the tree from various angles, the group eventually managed to lift up the branches and make way for the line of cars to pass.

The soaked passengers can then be seen running back to their bus, as traffic was restored.

Praises pour in for good Samaritans

Within a few hours following the incident, the video went viral on social media as netizens effusively praised the group.

Among them is the netizen who recorded the video. He wants to thank especially the cyclists in the video, whose act he thought highly commendable.

Another netizen pointed out the potentially dangerous weather conditions, which makes the acts of the few individuals even more extraordinary.

Others referred to them as “unsung heroes”, humbly doing incredible deeds.

When things are at an impasse, sometimes you just gotta roll up your sleeves and put in the work to get things going.

We’re heartened to see these selfless individuals who are willing to make a sacrifice for the well-being of others.

We hope that they are all warm and dried up now, and we thank them for making Singapore a lovelier place.

SBS Bus Captain Holds Umbrella For Passengers At Every Stop, Warms Our Hearts On A Rainy Day