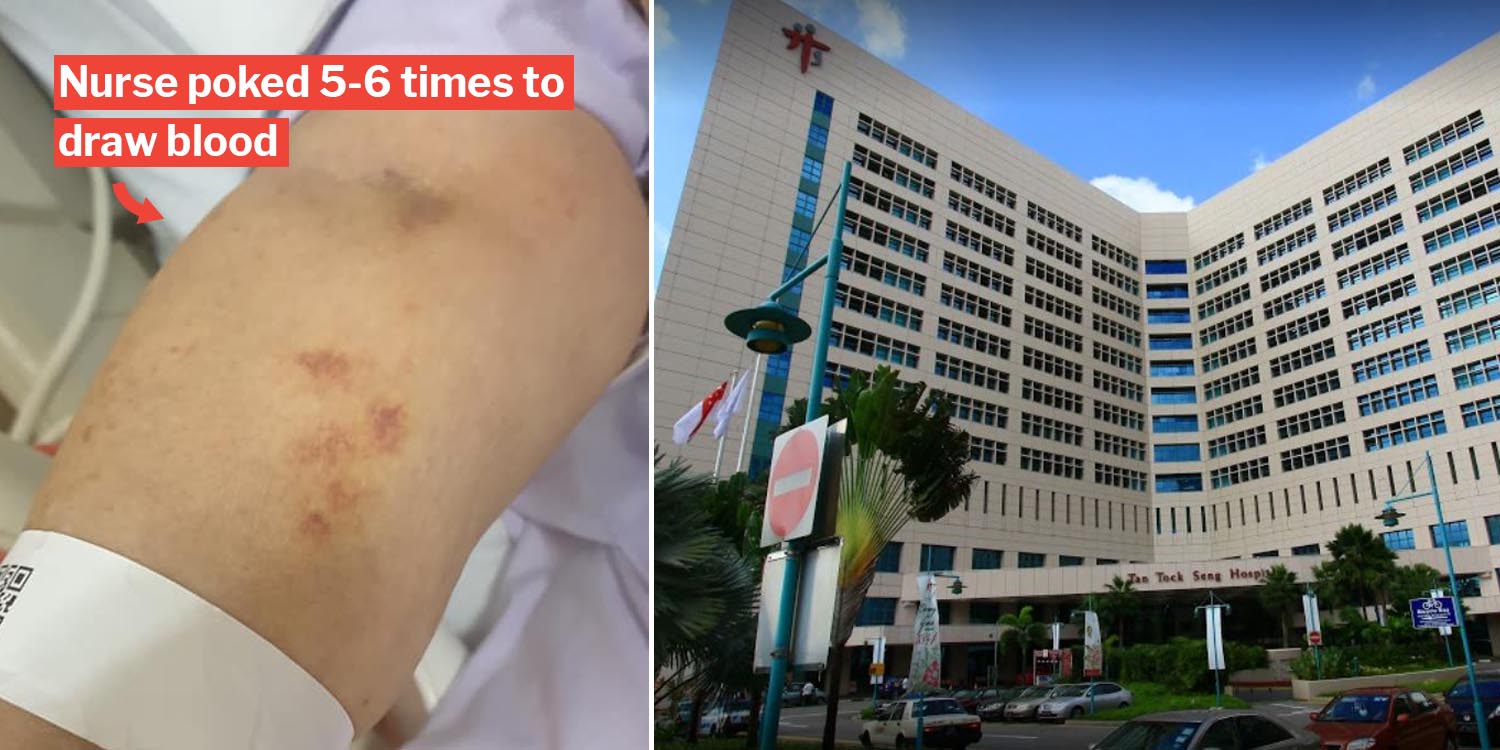 Hospitals are places we take our loved ones for serious medical attention. In our greatest times of need, we look to our medical professionals for help.

After a series of unfortunate mistakes and inaction, the woman’s son took to Facebook and shared his grievances over 3 incidences of maltreatment. 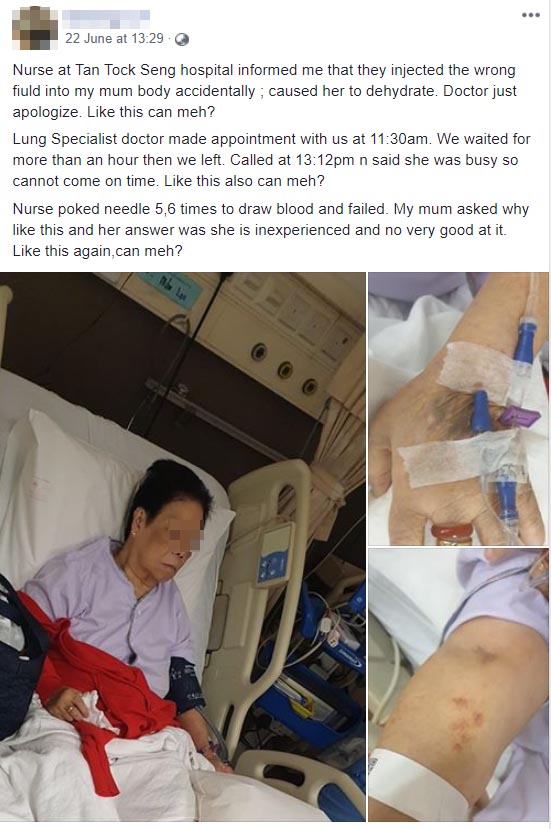 While there were reportedly no signs of complications after receiving the “wrong fluid”, it’s hard to curb worries when your mum’s hand becomes badly swollen.

No medication was given as well. Yikes. The man’s post already has over 2,700 shares at the time of publication.

On Saturday (22 Jun), the elderly woman was reportedly admitted to TTSH for high fever and increased heart rate.

Little did the woman’s son know that their decision to do so would increase his own heart rate too — no thanks to TTSH staff. 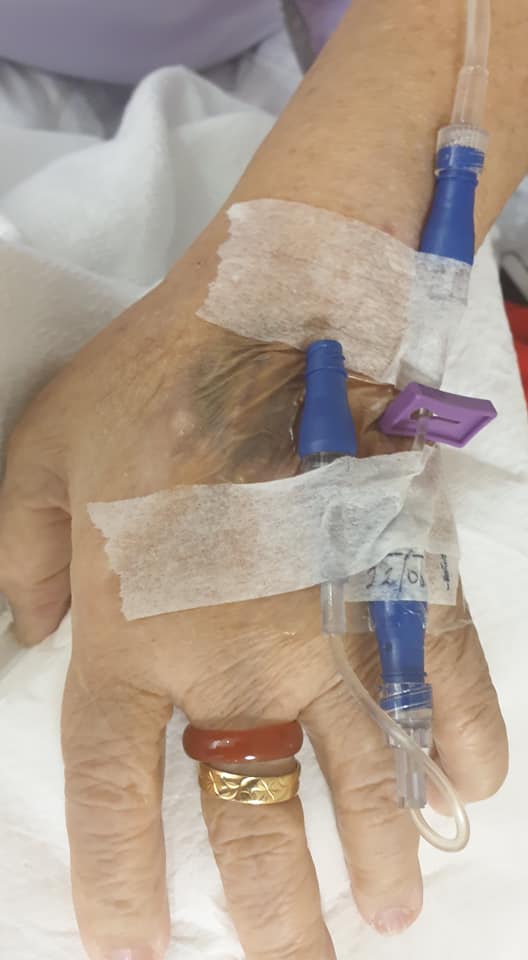 As a result, the elderly patient’s hand became severely bruised and swollen.

Swelling continued, but no medication given

In a second Facebook post the next day, it seemed that the ordeal was far from over. 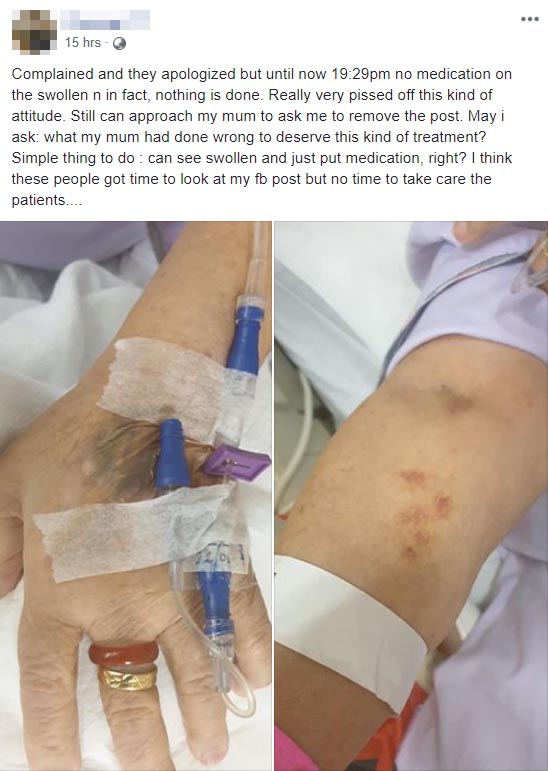 At 7.29pm Sunday (23 Jun), the son updated social media to say TTSH staff has apologised to them over their complaints. 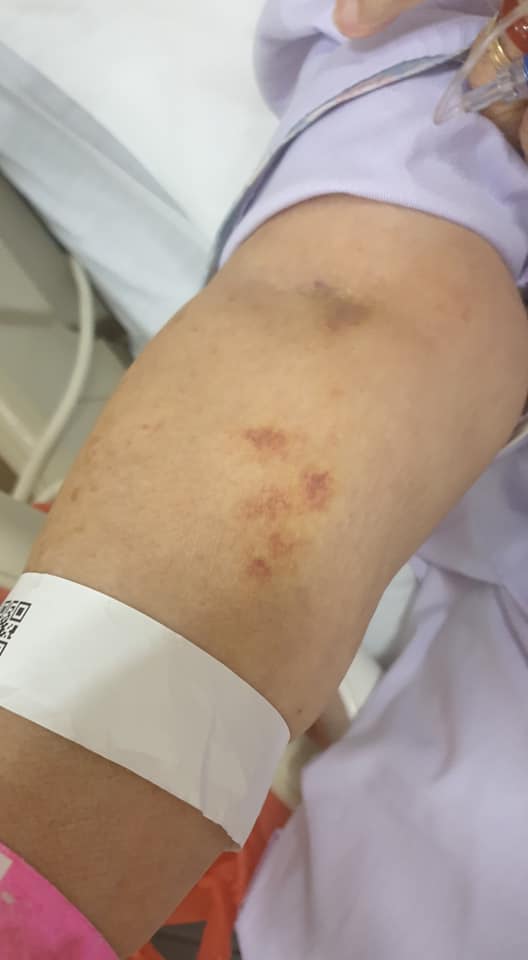 But no medication was administered for his mum’s swelling. In fact, he claimed that “nothing is done as of 19.29pm” and that he was “really very pissed off” at this.

May I ask what [has my mum] done wrong to deserve this kind of treatment? Simple thing to do: can see [that her hand is] swollen and just [give her] medication, right?

He also said that his mum’s hand had been swollen for at least 4-5 days, and asked “are the nurses blind?”

The son lamented that TTSH staff asked him to remove his complaints posted on Facebook too.

He was, of course, appalled. He said,

As of 8pm Sunday (23 Jun), the son finally updated that medication was provided.

One netizen was equally concerned, saying that the wrong injection could give rise to more complications.

She also stressed that patients are not guinea pigs “for trial and error”.

Meanwhile, many others are urging the son to either transfer his mum to another hospital, or file an official complaint with the Singapore Medical Council.

To which the son replied saying that he would do so the next day if there was no improvement in the staff’s attitudes.

TTSH could have done better

This is not the first time TTSH was thrust into the limelight for the wrong reasons.

Maltreatment cases at hospitals, such as this elderly patient’s, are mostly disappointing to hear of. Everyone deserves access to basic, proper healthcare no matter their income brackets.

We hope both mother and son are doing better today.