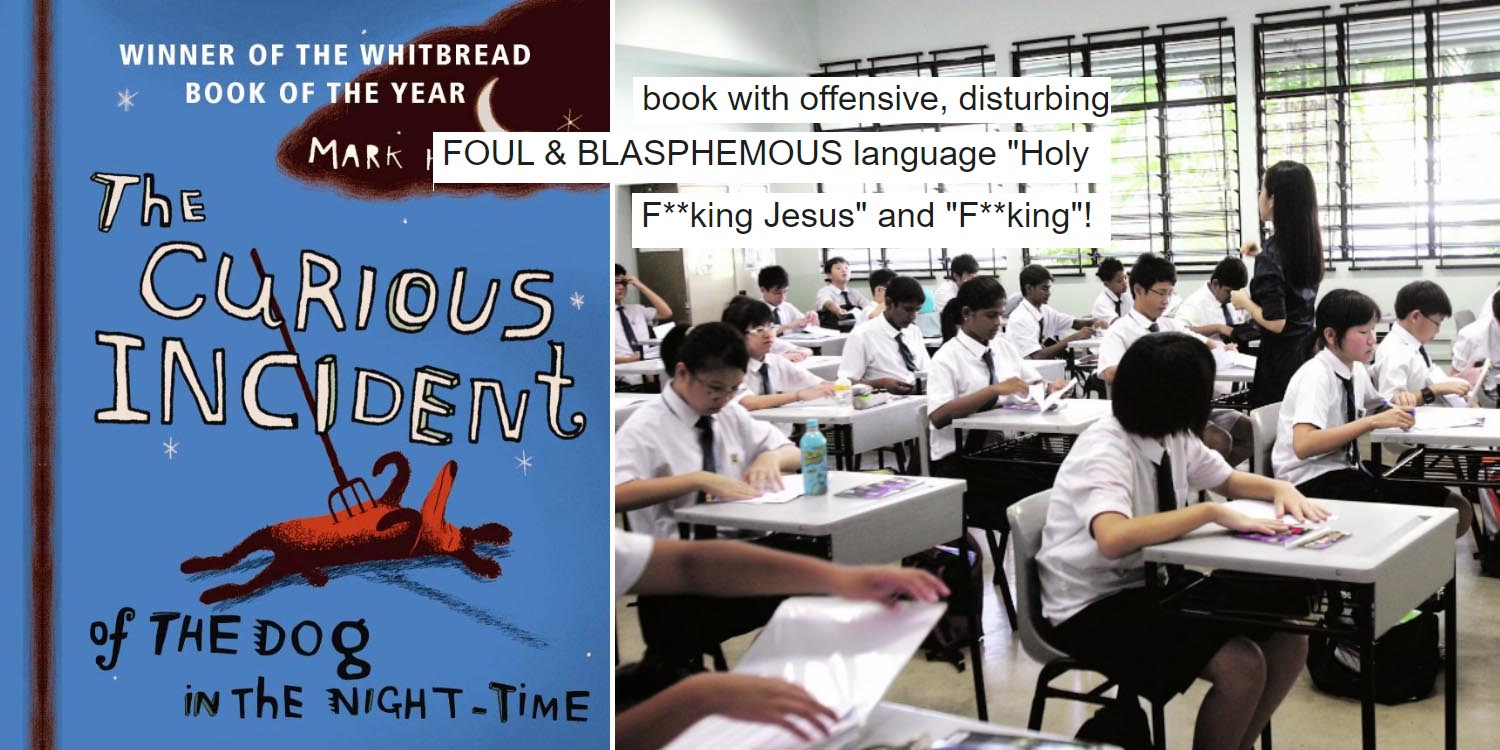 Lessons learnt from literature can be far more powerful than anything else you learn in the classroom. They can teach empathy by focusing on views that are different from your own.

One such book titled The Curious Case of the Dog in the Night-time, by Mark Haddon, contains a powerful lesson: the central character is a boy named Christopher, who is implied to see the world differently from others.

The book, which is apparently being used for lessons in school, has come under fire for its colourful language.

On 7 Dec (Sat), Singaporeans Defending Marriage & Family (SDMF) put up a post on Facebook warning of the book’s language.

Parents complain about novel with vulgarities to MOE

One parent of a Secondary 1 student thought the language was bad enough that they wrote in to the Ministry of Education (MOE).

The letter, which was shared in the comments section, introduces the writer as the parent of a Secondary 1 student, who bought the book in question for her curriculum in Secondary 2 and became “greatly disturbed” at its content – which has been shown above.

It then cites several facets of the law, such as Section 298A of the Penal Code, which targets those who speak out on religion or race in a manner that “sows enmity, hatred or ill-will”.

These laws are used to conclude that the law has been broken, which appears premature considering this book hasn’t reached a court of law.

The parent also concludes that a “majority of Singaporeans would be outraged” by the language depicted within The Curious Incident of the Dog in the Night-time, and calls for its removal from the curriculum.

Netizens argue that novel has values to teach despite vulgarities

Not everyone is in agreement with the OP.

While the comment section is largely filled with dissenters using vulgarities ironically in response to the OP, there were other more thoughtful comments espousing the values that the book teaches – in spite of the vulgarities contained within.

A netizen shared how he gained a better understanding for people on the autistic spectrum from reading the book.

Another netizen pointed out that teachers could teach students how to engage with the language used in the text without censoring or banning them.

Selection of book due to its “literary merit”

MOE has responded to the complaint, reports TODAY Online.

The ministry’s English Language and Literature director Jeffrey Low said the school had chosen the book for its literary merit, and how it imparts valuable lessons like:

He added that teachers are careful when selecting texts to ensure they are used for good reason.

Texts of literary value often deal with complex human conditions and reflect the imperfections in societies.

Mr Low also noted that the book’s reading in class is always closely guided by the teacher, so that students can draw positive lessons from the story.

A more nuanced approach needs to be taken to literature

Certainly, the usage of swear words in teaching material would be a concern – in a vacuum.

But the classroom should encourage a more nuanced approach to the text. For example, in the quoted passage, the father is the one mouthing the vulgarities in question. This might perhaps give clues to the father’s character.

Another example, To Kill A Mockingbird by Harper Lee, contains racial epithets, but the word is part of the history of racism in the United States and must be taken in context of the story’s setting.

We can’t have a black-and-white approach like the one that SDMF takes to The Curious Incident of the Dog in the Night-time.

Lest we risk missing the forests for the trees when we do so, and the blasphemous passages have to be considered in light of the rest of the text.

This is how we encourage critical thinking in students.