The company's office is allegedly closed.

Organising a wedding is no mean feat, which is why most couples would engage a wedding company to help plan and sort out the nitty-gritty details.

Unfortunately, things have been far from smooth-sailing for customers of Wedding by LQ.

Following the cancellation of their weddings due to Covid-19 restrictions, customers have allegedly been unable to receive compensation. The amounts that the company owes different couples apparently range from $500 to $30,000.

According to BERITAmediacorp, at least 4 police and 17 Consumer Association of Singapore (CASE) reports have been filed against the company between 1 Jan and 5 Oct. Police investigations are ongoing.

Futile attempts to receive a refund from Wedding by LQ

A Wedding by LQ customer, Mr Fariq, took to Facebook on 9 Oct to share his failed attempts to get a refund from the company. 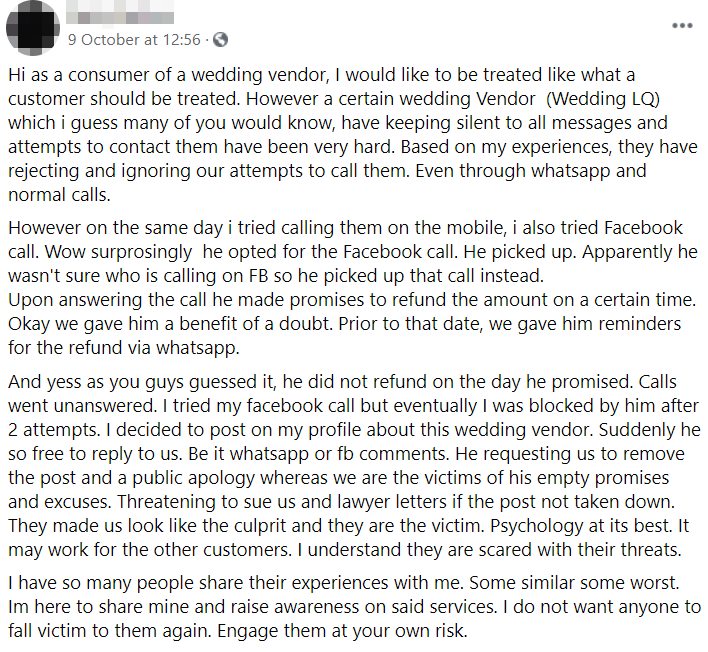 Mr Fariq detailed his futile attempts to contact the vendor, claiming that countless calls were left unanswered. The single call that eventually went through entailed the vendor promising to make a refund by a certain time.

When the refund never came and Mr Fariq tried to contact the vendor again, he was allegedly blocked from all forms of communication.

You can read the post in full here, and have a look at the screenshots of their exchanges which Mr Fariq posted.

A look at the Wedding by LQ Facebook page also shows various comments requesting an audience with the company.

One netizen even shared that he has been waiting for a refund for over a year.

Another netizen claimed that despite the company’s rampant activity on social media, they have not responded to his email.

At the time of writing, comments are disabled on their more recent Facebook posts.

According to BERITAmediacorp, various customers have resorted to visiting Wedding by LQ’s physical office to seek compensation.

However, upon reaching the addresses stated on their Facebook page, the office seemed to no longer be in operation.

They apparently discovered that Wedding by LQ had shifted to a different office without informing customers.

But when some of them tried to visit the new office, they found it closed too, reported BERITAmediacorp. The company’s website also appears to be unavailable.

As Covid-19 has affected many wedding plans, the Government has issued guidelines for anyone seeking to find solutions to disputes relating to deposit repayments.

While they can help mediate proceedings, they urge both service providers and clients to find a compromise between themselves.

One couple had attempted this route but have yet to find an agreement, according to BERITAmediacorp.

Meanwhile, at least 4 others have filed police reports, which the police have confirmed receipt of with BERITAmediacorp. They stated that they’re investigating the matter.

MS News has reached out to Wedding by LQ for comment on the matter and will update the article accordingly.

Hope vendor & customers can arrive at a peaceful resolution

While we can empathise with a business affected by Covid-19, how a company reacts to it is telling of their practices.

This is especially when it concerns a wedding company that customers entrust to make their special day meaningful.

We thus hope that the issue won’t drag any longer and that the company and its customers can arrive at a peaceful solution soon.

Featured image adapted from Wedding by LQ on Facebook.