Google Trends Shows Spike In Searches For “Where Is Singapore Located?”

The days of Singaporeans in the United States being asked “Is Singapore a part of China?” may finally be over.

And it’s all thanks to the historic summit between American President Donald Trump and North Korean leader Kim Jong-un, set to take place on Tuesday (12 Jun).

With both leaders firmly on Singaporean soil, the world’s attention has turned to the Little Red Dot.

Ever the inquisitive bunch, Americans are relying on Google to find out more about our little island-nation.

Google Trends shows a sharp spike in searches for “Where is Singapore located?” ever since we were confirmed as the venue of the meeting in May. 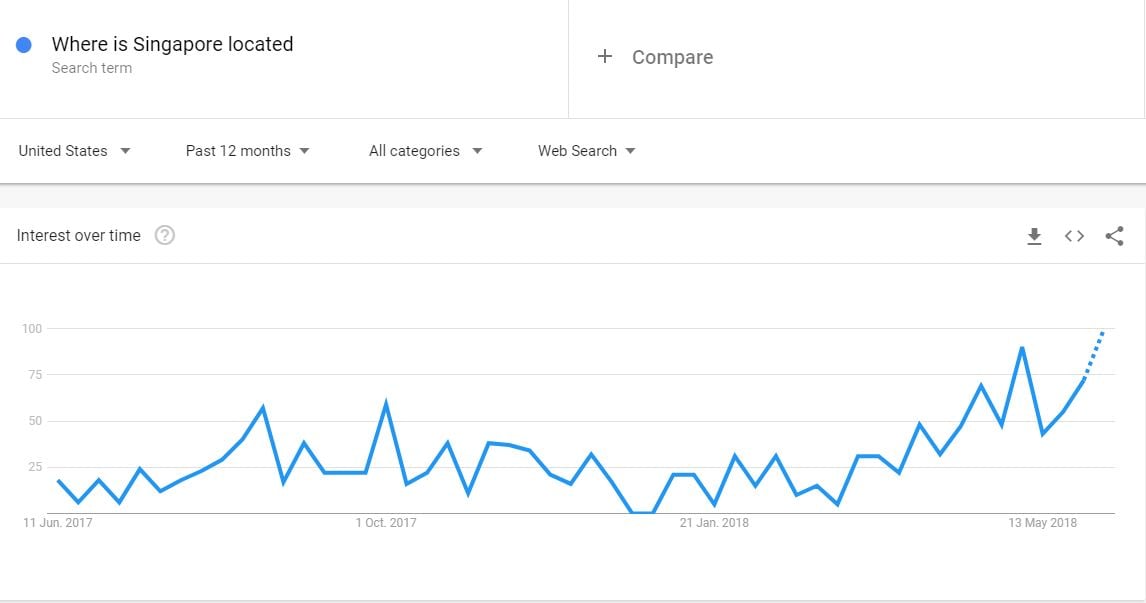 Interest has been steadily picking up again in the lead-up to Tuesday’s summit.

Perhaps unsurprisingly, most of the searches came from middle America, i.e. Trump country.

3 of the top 5 states that searched for “Where is Singapore located?” voted for Mr Trump in the 2016 elections.

They were Iowa, Kentucky and Tennessee.

Connecticut and Colorado – which gave Hillary Clinton comfortable victories – were also in the top 5.

We expect searches to spike again once pictures of Tuesday’s meeting are released.

The money shot of Mr Trump and Mr Kim shaking hands will likely be the most-viewed photograph of 2018.

Breaking out of China’s shadow

As recently as last year, China tried to bully Singapore into submission by flexing its muscle over the Terrex issue.

Obviously uncomfortable with President Obama’s Pacific tilt, China tried to position Singapore as pro-China and anti-USA, which we are obviously far from.

With this meeting, Singapore has successfully proven its diplomatic independence: friend to all, foe to few.

Whether it’s the commies in China and North Korea or the questionable leaders of the United States, we’re willing to be your friend, so long as you play nice.

Judging by comments on Instagram, Singaporeans are loving this long-overdue recognition.

Our neighbours from Malaysia also had a nice word to say about the summit.