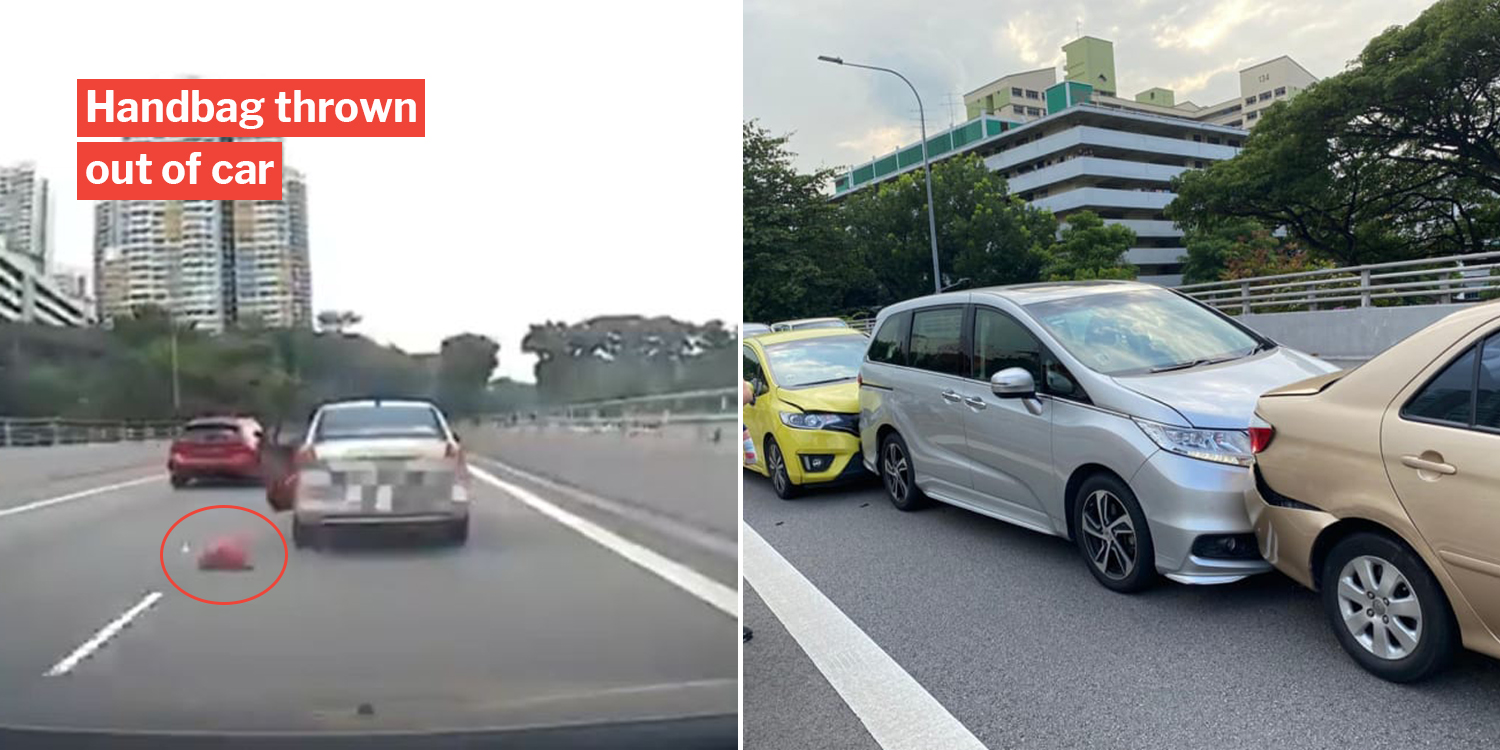 Getting into a family argument is common and inevitable, but sometimes they may end up with disastrous consequences, especially if it’s in public.

This unfortunately was what happened on Sunday (12 Jan), when a 21-year-old Singaporean lady threw her handbag out of the car after allegedly getting into a heated argument with her family.

This caused a 5-way car collision, which luckily did not result in any injuries. However, things could have been much worse.

According to 8World News, this accident happened on Sunday (12 Jan) at around 4pm along Ayer Rajah Expressway (AYE). Here’s a summary of what happened that day.

Noticed something wrong with champagne-coloured car

In an interview with 8World News, a man involved in the accident, Mr Hong, shared that prior to the accident, he noticed that the champagne-coloured car was acting off.

He also noted that the vehicle driving directly behind the car started slowing down. Hence, to avoid getting himself in an accident, he decided to switch lanes.

However, before he even managed to switch lanes, the rear door of the champagne car swung open. The car door had already been ajar for several seconds prior.

A few moments later, a red handbag flew out of the car – items splaying all over the road.

We reckon the lady in the car got so pissed over her family argument that she decided to ‘yeet’ her bag out.

Not exactly a wise move though, because the immediate aftermath was 4 cars slamming their brakes to avoid the handbag.

And that was how the 5-car collision happened. 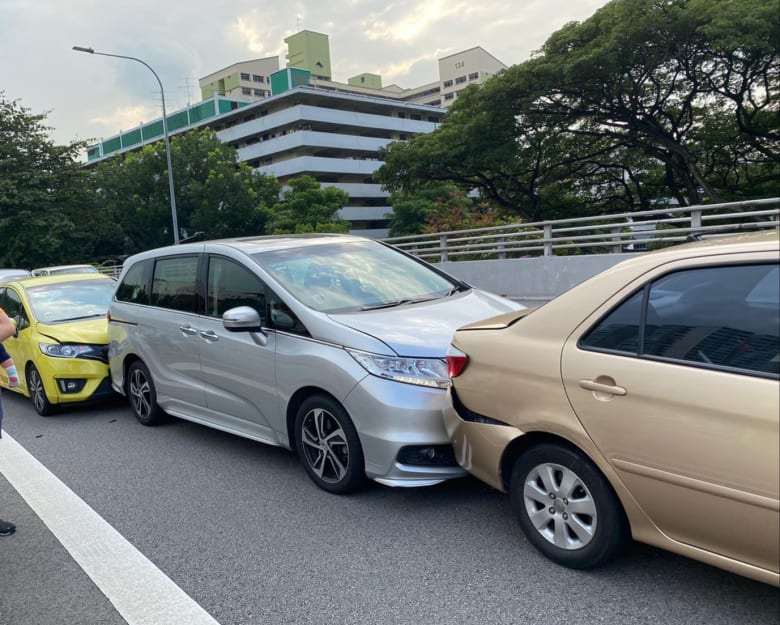 Mr Hong shared that moments after the collision, the lady bag-thrower stomped out of the car and confronted another lady in the driver’s seat.

Many assumed that the bag-thrower and the driver are of a mother-daughter relationship.

Mr Hong then added that the lady driver sat still and speechless at her seat while her daughter continued yelling at her.

Bag-thrower yelled at police, ends up getting handcuffed

When the police arrived, instead of taking a chill pill, the lady bag-thrower started yelling hysterically at the police officers, said 8World News.

Alas, the police officers were so done with her screaming that they handcuffed her and escorted her into the police car. 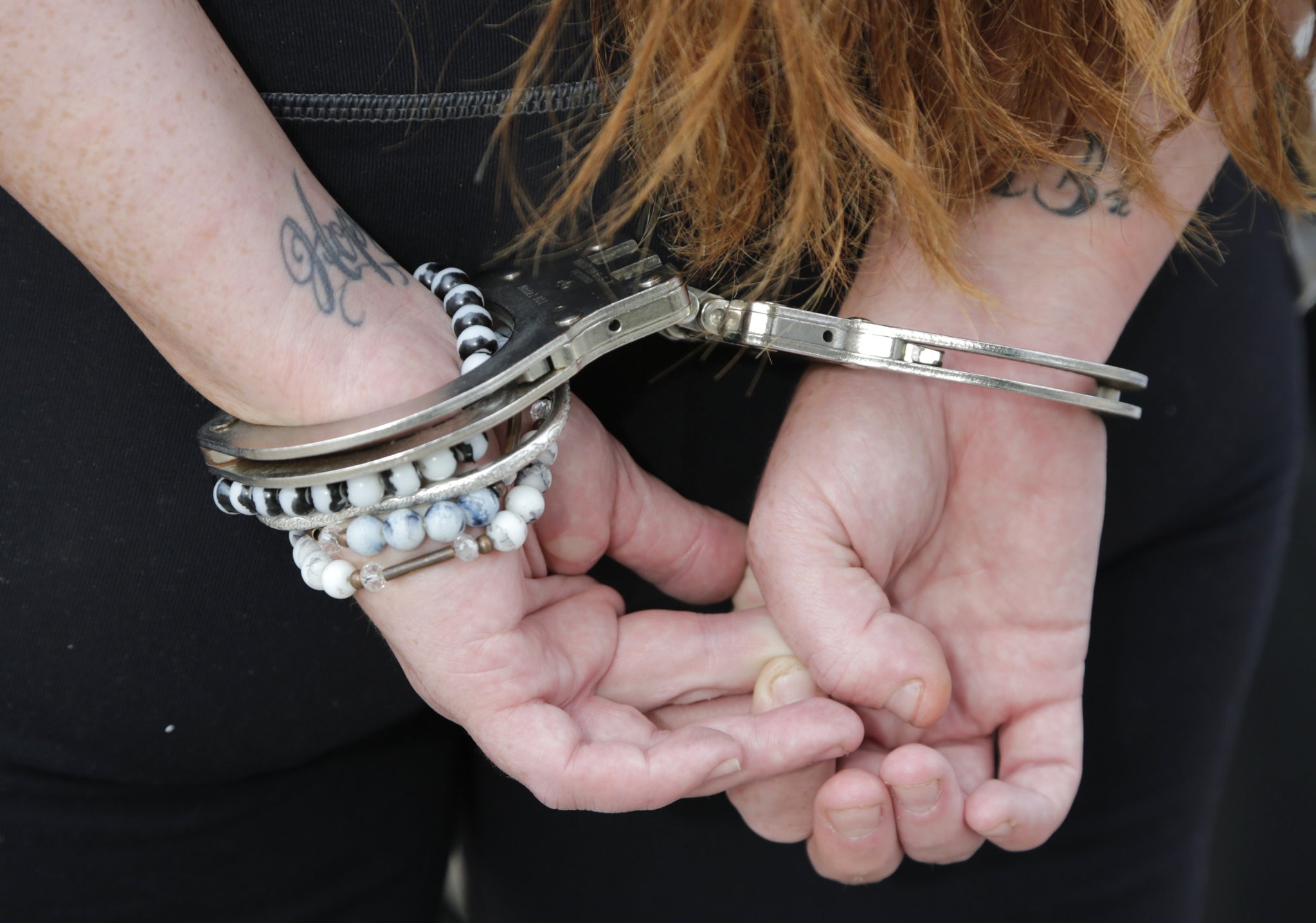 Police are investigating the incident.

Who knows what would have compelled this woman to pull a Mario Kart-esque move? If that was her goal, she succeeded in sabotaging the cars behind her.

Hopefully she understands that her act is only applicable to the best-selling party game on the Nintendo Switch, and not on a busy expressway.