“No parent should have to bury their child”. So goes the famous quote from King Theoden in Lord of the Rings: The Two Towers.

Tragically, for a married couple living in Johor, that was what they had to go through after losing their 20-year-old daughter last year.

She had reportedly took her own life out of work stress.

She would have turned 21 on 15 Nov this year. And her parents continue to grapple with the fact that they can no longer celebrate this special day with their daughter.

The girl’s parents are now reaching out to the Singaporean authorities in hopes of seeking justice.

According to Shin Min Daily, 20-year-old Catrene Khoo had moved from Muar, Johor to Singapore to work as a therapist in a visual therapy firm last Aug.

However, Khoo’s mother said she had gone through many stressful experiences, mostly due to her boss.

After Khoo’s death, Mrs Khoo shared that she had wanted to come to Singapore to seek justice. But unfortunately, her plans were thwarted due to Covid-19, and the fact that she had no passport and money.

It was only later that she learnt more about her daughter’s experience from a former employee of the company, whom her goddaughter knew.

The former employee sympathised and filed a complaint with Ministry of Manpower (MOM) on her behalf, while Mrs Khoo lodged a report in Malaysia.

In a viral Facebook post, people claiming to be ex-employees of the same company that Khoo had worked for, had put together various documents to tell her story.

The post, which was also shared on Mrs Khoo’s own profile, contained allegations against the firm’s boss in his treatment towards Khoo, such as:

In the 4th and last month of her employment, Khoo had to rush for a late night bus to Penang as she had applied leave.

Unfortunately, she was allegedly held back for an impromptu meeting, where she was informed of her poor performance and that she should consider not taking her approved leave as a result. 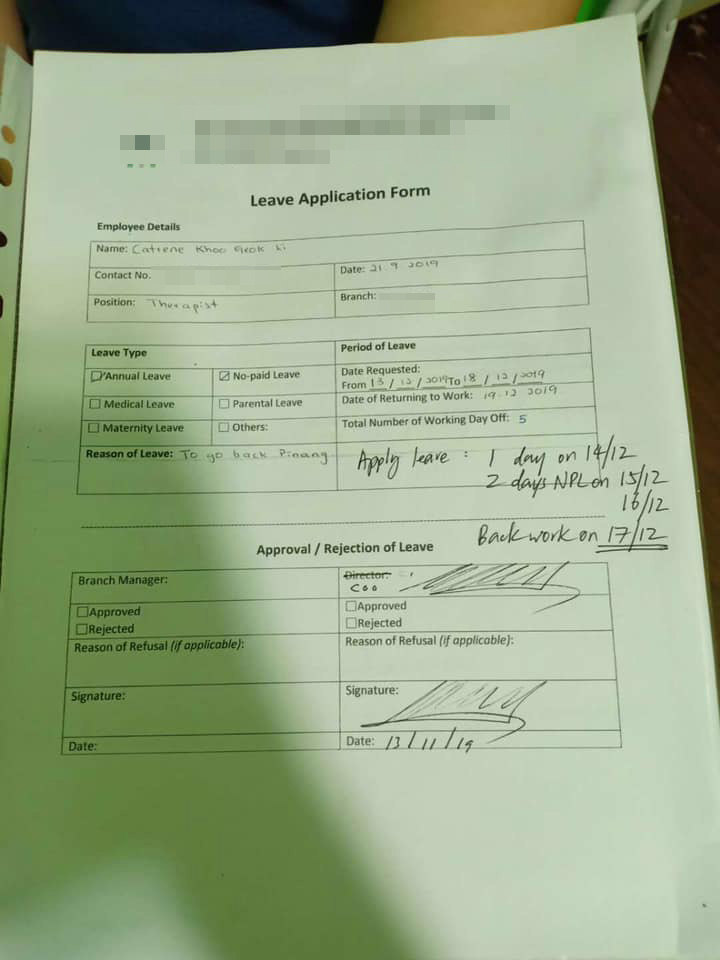 Even though Khoo had reluctantly agreed, she was reportedly served a letter of termination.

It stated she won’t be getting her full salary, and that she will need to compensate the company $1,000 due to tax clearance.

Then, the Facebook post claimed that the following sequence of events had taken place, which caused Khoo a great deal of distress:

On 18 Dec, the post said she flew back to Singapore to return her permit in the end and moved back to her home in Johor.

After leaving behind a note, Shin Min Daily reported that Khoo had taken her own life on 19 Dec 2019 when her family wasn’t home. She is survived by her parents and younger brother.

Left behind note expressing her regrets

The contents of her heartbreaking letter were revealed in the very same viral Facebook post. As it was written in Chinese, we’ve translated the note to English below. 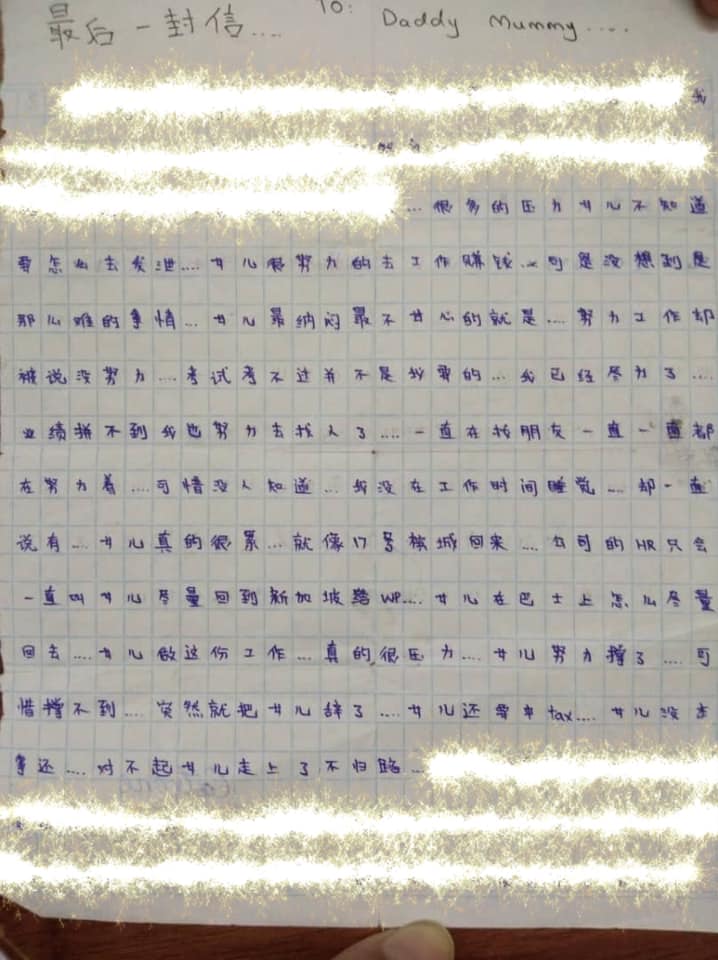 As your daughter, I’d first like to say I’m sorry. For 20 years, you’ve taken good care of me all along. But with my sudden departure, please forgive me for not being filial.

I really can’t bear the stress any longer, as I don’t know what to channel it towards. I’ve worked hard to earn a keep, but I didn’t expect it would be this hard.

What I feel is most unjust is that despite my hard work, I was told I didn’t do enough. It wasn’t my intention not to pass the exam. I had already tried my best.

As for sales results, I had tried my utmost to approach friends. Unfortunately, no one acknowledged my efforts. Neither did I sleep on the job, contrary to what was said. I just feel exhausted.

This job has been immensely stressful, but I’ve tried my best to hold on. Sadly, I can’t do so any longer. With the sudden termination, tax is still due –- something I can’t afford.

I’m so sorry for choosing a path with no return. I only ask that you forgive me.

Do know that I truly love you both. Thank you for bringing me into this world. I wish I could have accomplished what I set out to do, but I was too weak to fulfil those promises.

When I’m gone, I hope you don’t cry as it will break my heart. I won’t be able to hold you nor dry those tears. But remember that I’ll always love you.

Shin Min Daily reported that Khoo’s ex-boss had denied all the allegations above. He explained that Khoo was sacked due to poor performance.

Speaking through his lawyer, he said a former employee, who is now a competitor of the firm, is behind the malicious posts online.

These posts intend to stop potential customers from patronising my company & prevent potential employees from joining. They want to hurt my business.

He also expressed shock knowing that a group of unhappy ex-employees had made up allegations against him, as well as publicised Khoo’s suicide at the expense of her family members.

To this, he apologised.

I apologise for this, because if it weren’t for my competitors who threw malicious accusations at my company, this matter will not be made public.

He further stressed that although he is demanding, he is a fair employer. He shared that many of his current employees can testify to his company’s positive work culture.

Shin Min Daily also wrote that he had called Mrs Khoo to apologise. But she told him that it was too late and she will be seeking legal recourse for her daughter’s death.

According to the viral post on Facebook, all of Khoo’s letters, documents, and audio recordings have been submitted to MOM upon their request.

They expressed determination in seeking justice for “those responsible”, so that Khoo’s family can have closure.

Shin Min Daily reports that MOM is currently investigating the case after Khoo’s mother had contacted the ministry on 29 Oct this year.

May Khoo rest in peace

Though the circumstances surrounding Khoo’s demise were seemingly tragic, we only have most of Khoo’s side of the story for now.

The allegations against her ex-employer, if true, are quite worrisome. We hope he will eventually step up to address this matter and clear his name.

As we leave it to MOM to conduct the necessary investigation, we hope that their findings would eventually provide closure to Khoo’s family.

In the meantime, here’s a list of helplines to take note of if you or your loved ones are in need of professional help.