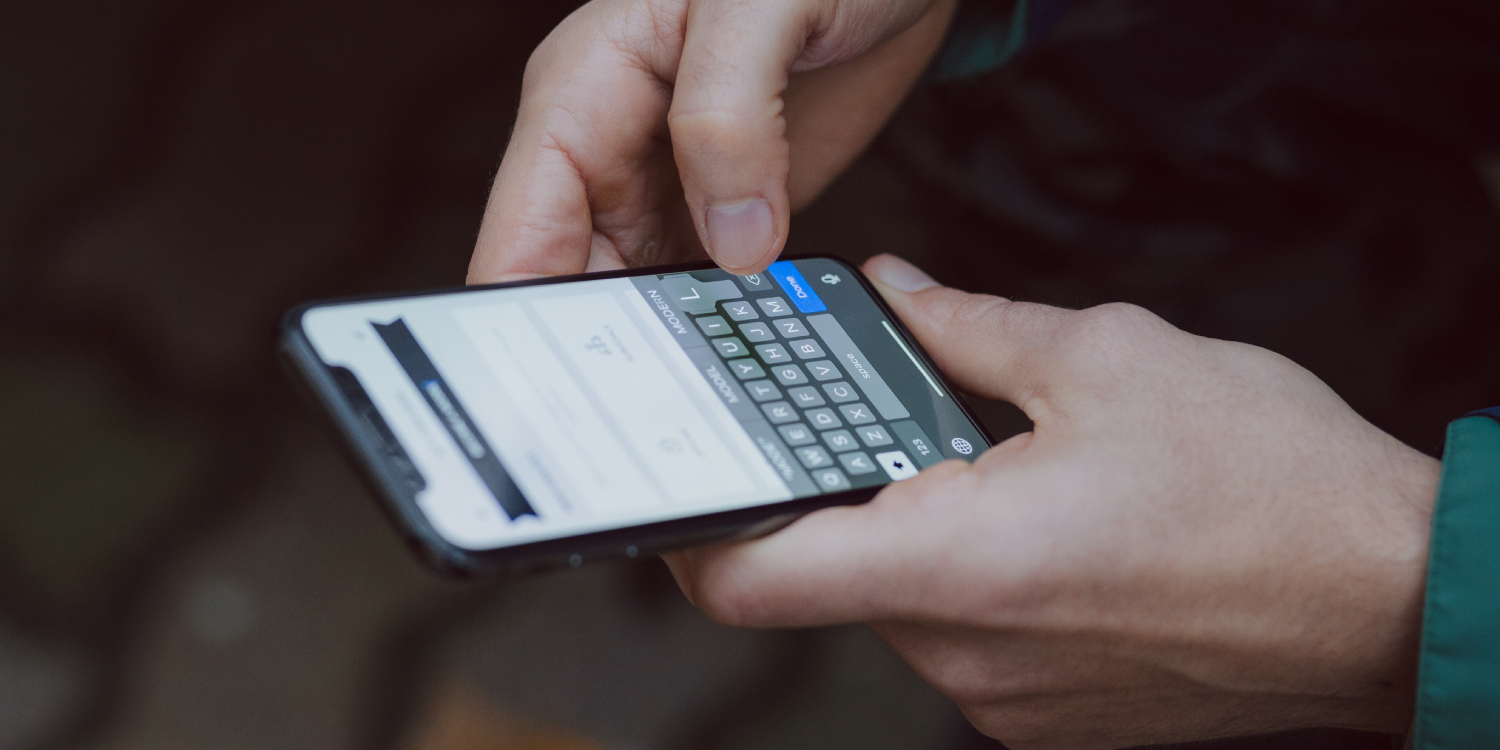 Scams have been a serious problem in Singapore over the past few years, with many losing a lot of money to such crimes.

Despite efforts to raise awareness so that the public can avoid falling victim to these unscrupulous acts, scams continue to be on the rise.

Recently, the Singapore Police Force (SPF) provided statistics on the scams that happened in the first half of 2022.

They shared that over a period of six months, victims lost more than S$227 million in over 14,000 cases.

To fight against future fraud attempts, SPF will be reinforcing ongoing efforts to address the situation.

On Monday (29 Aug), SPF released their mid-year crime statistics report for the first six months of 2022.

They stated that scams continue to be the main driver of crime, with 14,349 scam cases bringing the total number of reported crimes to 25,593 cases from Jan to Jun.

The number of scam cases has almost doubled from the 7,746 cases reported within the same period last year.

Job scams, phishing scams, e-commerce scams, and investment scams made up 74.5% of the top 10 scam types in the first half of 2022. 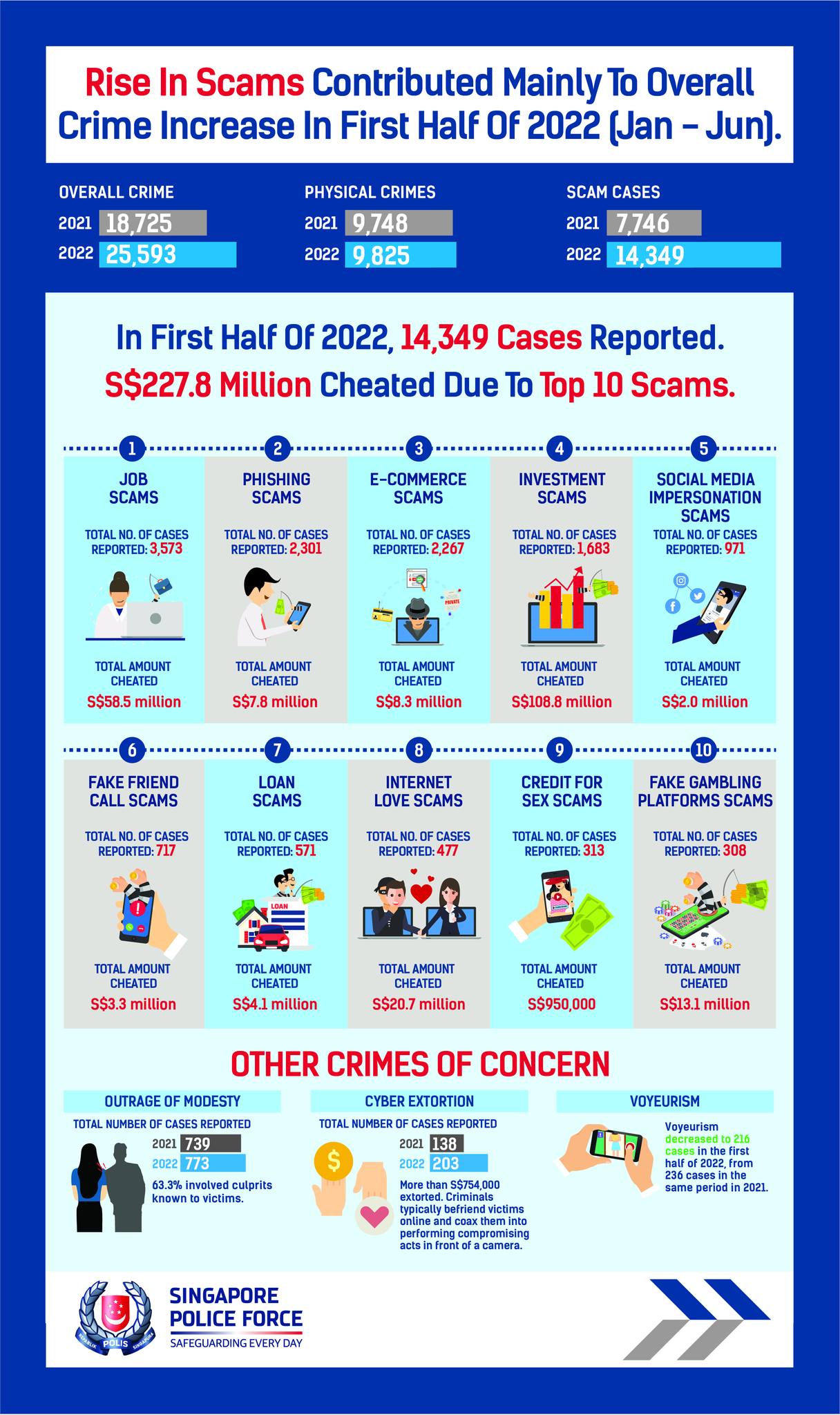 With 3,573 cases, job scams were the most commonly reported type of scam in the first half of 2022.

Victims lost a total of S$58.5 million after falling prey to the promise of attractive “commissions” for simple tasks which required them to provide their own funds. They would contribute more and more funds for a larger “commission” but end up losing their money instead.

Recording the second highest number of reported cases, with 2,301 cases, were phishing scams.

Scammers would trick victims into providing sensitive information like credit card details on fraudulent websites. This caused victims to lose a total of S$7.8 million.

As for e-commerce scams, 2,267 cases were reported.

Victims were cheated of a total amount of S$8.3 million, with rental scams involving fake property listings making up 29.6% of the cases.

While the number of investment scams reported was lower than the other three types with 1,683 cases, the amount lost amounted to a whopping S$108.8 million.

In this scheme, scammers would pose as financial professionals and entice victims to make seemingly lucrative investments. However, victims would then be unable to cash out their earnings and the scammers would suddenly become uncontactable.

To combat this concerning issue, SPF has several measures in place.

Enforcement efforts include the formation of the Anti-Scam Command (ASCom), which works closely with the Scam Strike Teams (SSTs) to tackle and solve scam cases through joint investigations and operations.

The police will also continue to take tough enforcement against local scammers and money mules. They will step up collaboration with overseas law enforcement agencies as well since scams still predominantly originate from foreign countries.

They conducted a total of seven joint operations with agencies such as the Royal Malaysia Police (RMP) in the first half of 2022, leading to the arrest of 39 members of overseas syndicates.

Engaging and educating the public

Besides enforcement, there are also engagement and education efforts involving the public.

The ASC has carried out 240 interventions with potential scam victims by stopping transfers of over S$41 million to scammers. They identified these victims through fund tracing and analysing money mule accounts.

SPF also worked with several other agencies to launch the ScamShield mobile application in Nov 2020.

The app helps to filter out messages and block calls from numbers that have been verified as scam-related. This has helped reduce the opportunities for scammers to contact potential victims.

And finally, SPF will continue with their public education efforts against scams.

“A discerning and well-informed public is the best defence against scams, especially given the increase in scam variants,” SPF stated.

To learn more about the various scam types and the steps to take to avoid falling victim, visit the Scam Alert website here. You can also download the full SPF news release here.