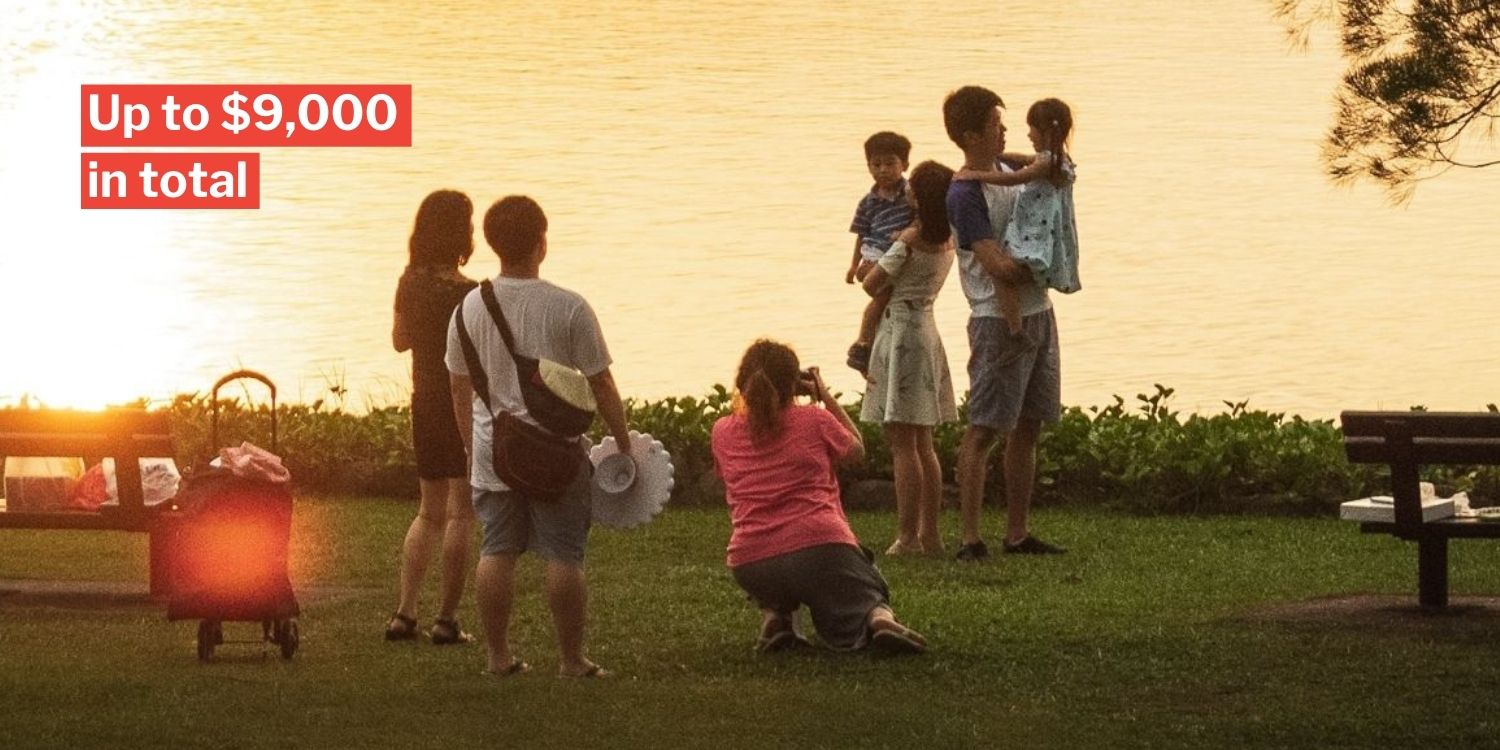 Giving birth and bringing up a child in Singapore isn’t cheap, let alone doing so for 2 or more children.

And it would have gotten worse for some families during the Covid-19 pandemic.

Recognising this, the Government will provide more financial support for couples who have a 2nd child. 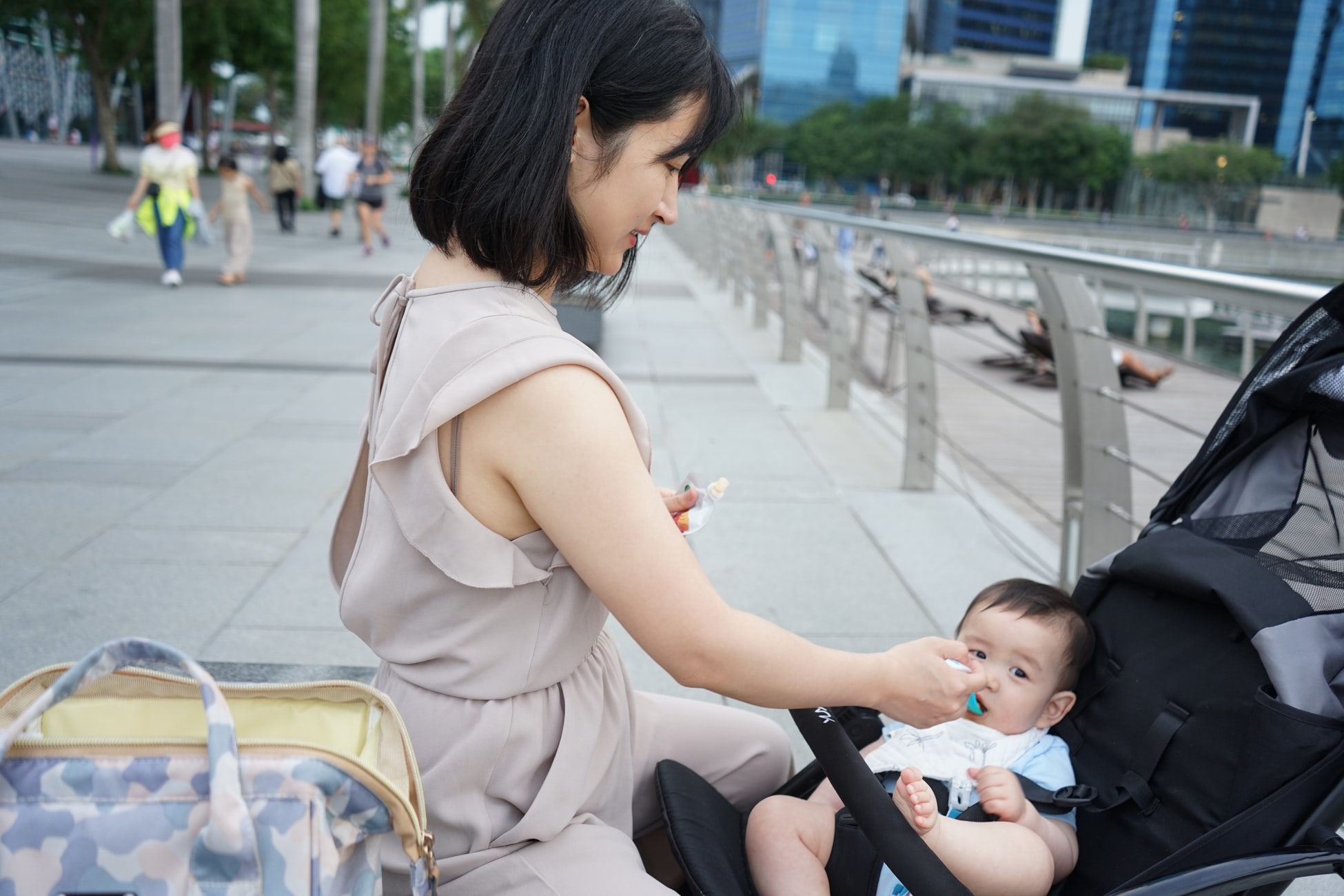 Specifically, they will be doubling the amount that’s topped up in the kid’s Child Development Account (CDA) when their parents put in an equal sum.

But that’s if the child is born on or after 1 Jan.

The good news was announced by Minister in the Prime Minister’s Office Indranee Rajah when she spoke in Parliament on Friday (26 Feb). 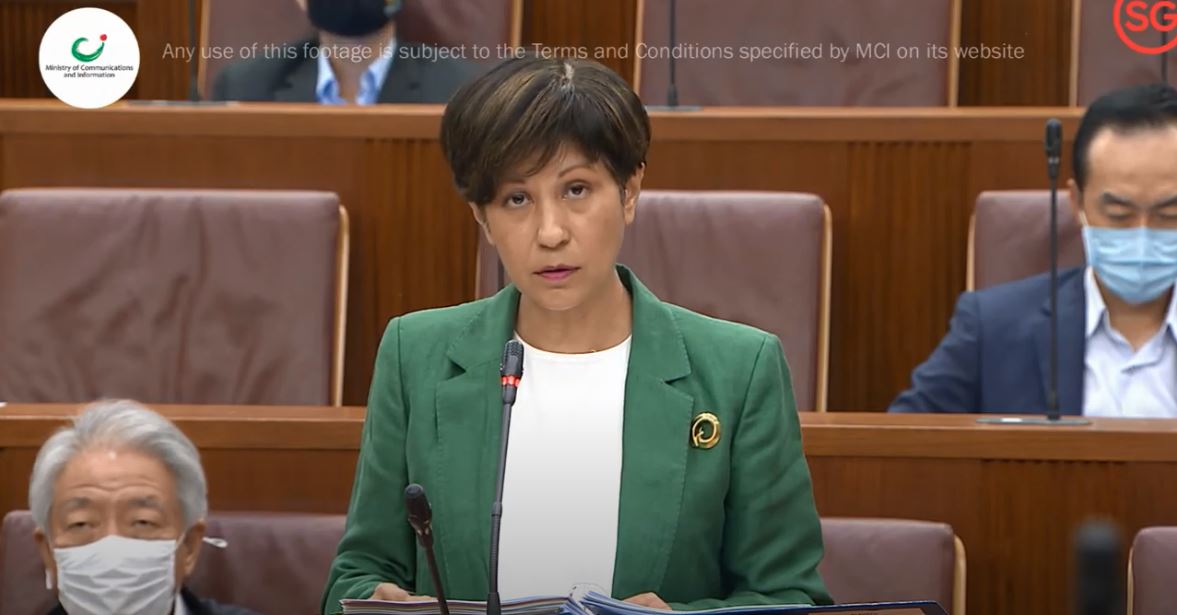 During her speech, she revealed the troubling statistic that a growing number of Singaporeans are having just 1 child.

However, most married Singaporeans want 2 or more children, and the majority do indeed do that, she said.

Ms Indranee, who oversees the National Population and Talent Division (NPTD), acknowledged that the Covid-19 pandemic has caused some Singaporeans to postpone marriage and parenthood.

That’s why the Government introduced the Baby Support Grant, which will give $3,000 to parents of any Singaporean child born between 1 Oct 2020 and 30 Sep 2022.

No deposit from the parents is needed for them to get this sum, so this will help defray some costs of having a child. 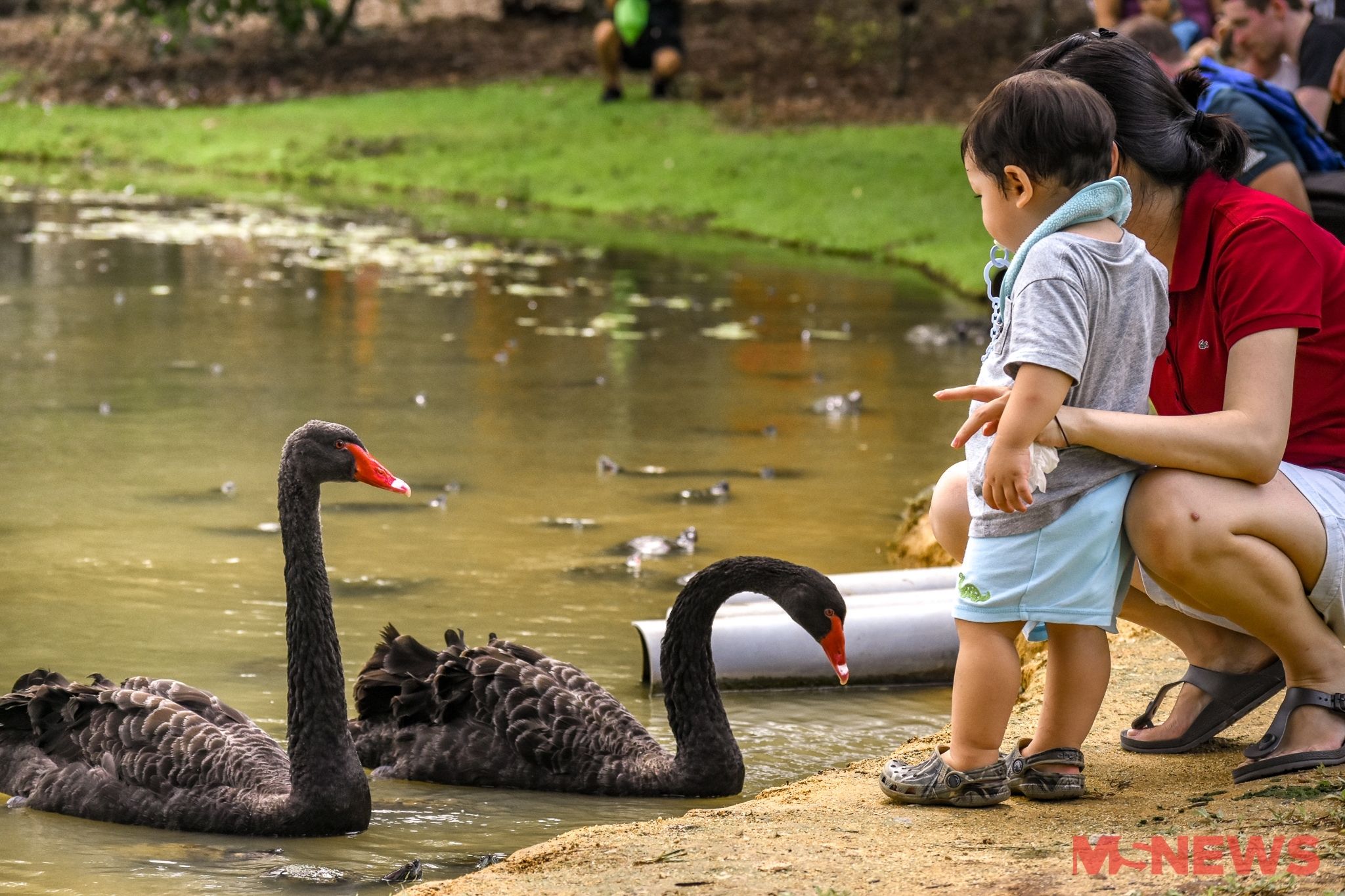 The grant is deposited into the child’s CDA – a special savings account that can be used to pay for childcare fees, medical expenses and other things.

On top of the $3,000, the Government would also contribute another sum of up to $3,000 into the child’s CDA, if the parents’ contributed the same amount.

This was applicable to the 1st and 2nd child of a couple. 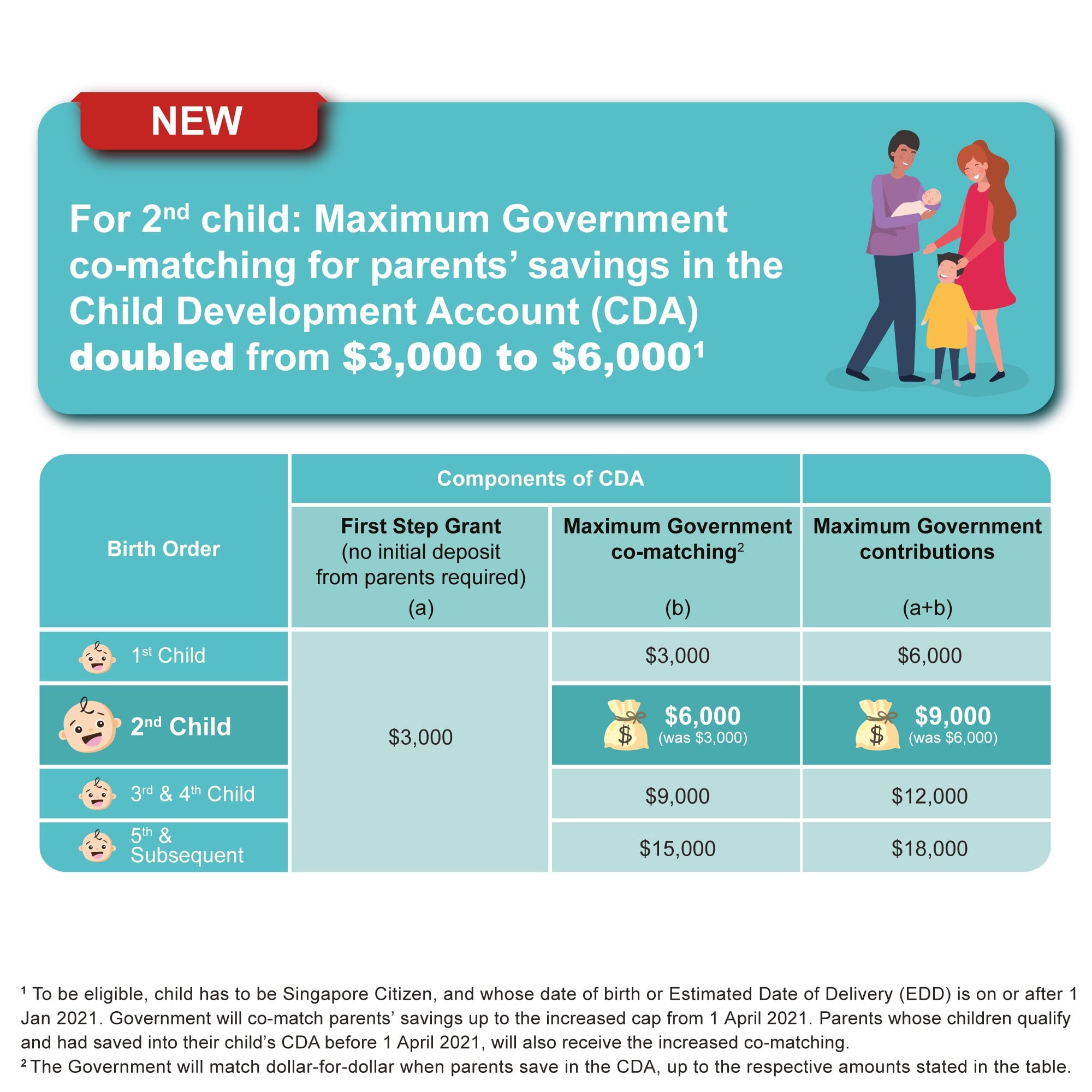 About 12,000 children every year will benefit annually from this increased grant.

Child must be born from 1 Jan

However, to be eligible for the increased top-up, the child must be born on or after 1 Jan 2021, Ms Indranee said.

Either that, or his or her estimated date of delivery is from that date. 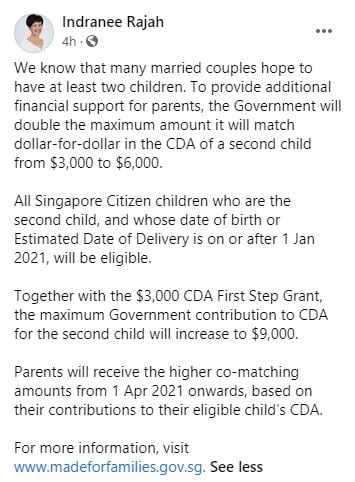 Parents must also have put in the amount into the CDA before 1 Apr.

They will then get the matching amount from 1 Apr.

The Government will also be helping parents who don’t qualify for paternity or adoption leave from their companies.

This is by 2 schemes, 1 for fathers and the other for adoptive mothers. 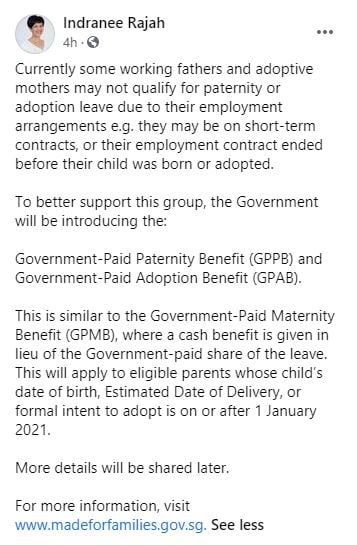 The schemes are similar to the current Government-Paid Maternity Benefit for working mothers, Ms Indranee said. 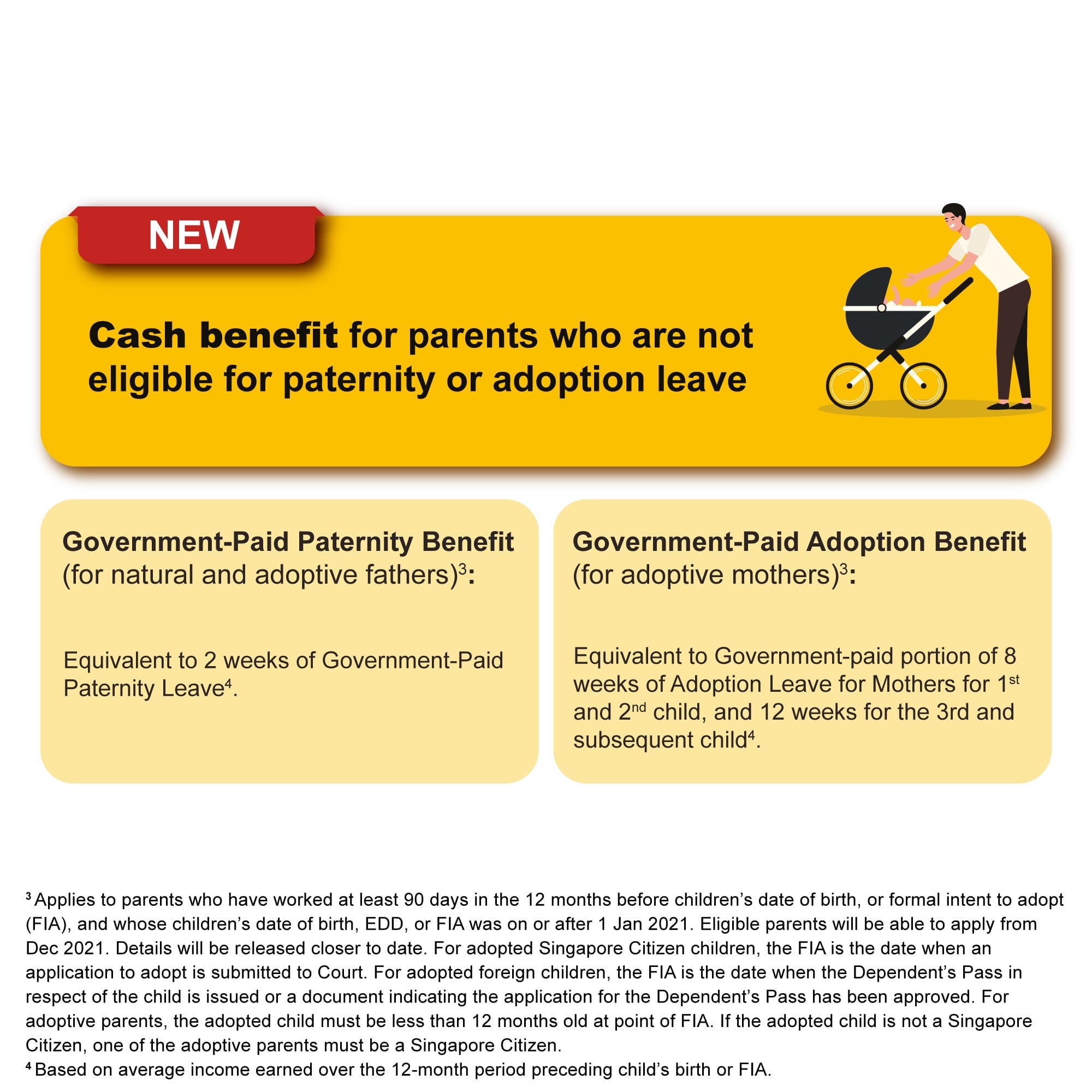 To get the benefit, the parents must have worked for at least 90 days in the 12 months before the child’s birth date or formal intent to adopt (FIA).

The child’s birth date or FIA must also be from 1 Jan.

Will Singaporean couples take the plunge?

Giving birth to more Singaporean children is important for a country like Singapore that has no natural resources except for people.

With more incentive to give birth to a 2nd child, it remains to be seen whether Singapore couples will now be more willing to take the plunge.

We wish those who’re taking on the challenge all the best.