Artist Captures HDB Town Centre In The 1980s, Weaves S’pore’s Past & Present Together Seeing multiple places and times within one painting.

Today, Singapore is renowned for being one of the most expensive yet most well-planned cities in the world. But how did our country look like 40 years ago?

The 1980s are often touted as the golden era as we saw robust economic growth and low inflation rates. In the bustling core of CBD, sampans still filled the Singapore River, while slews of old shophouses overlooked the stream.

It was a glorious mix of old-world charm and modern delights. And Singaporean artist Yip Yew Chong aims to capture all that in a colossal painting, currently a work in progress. 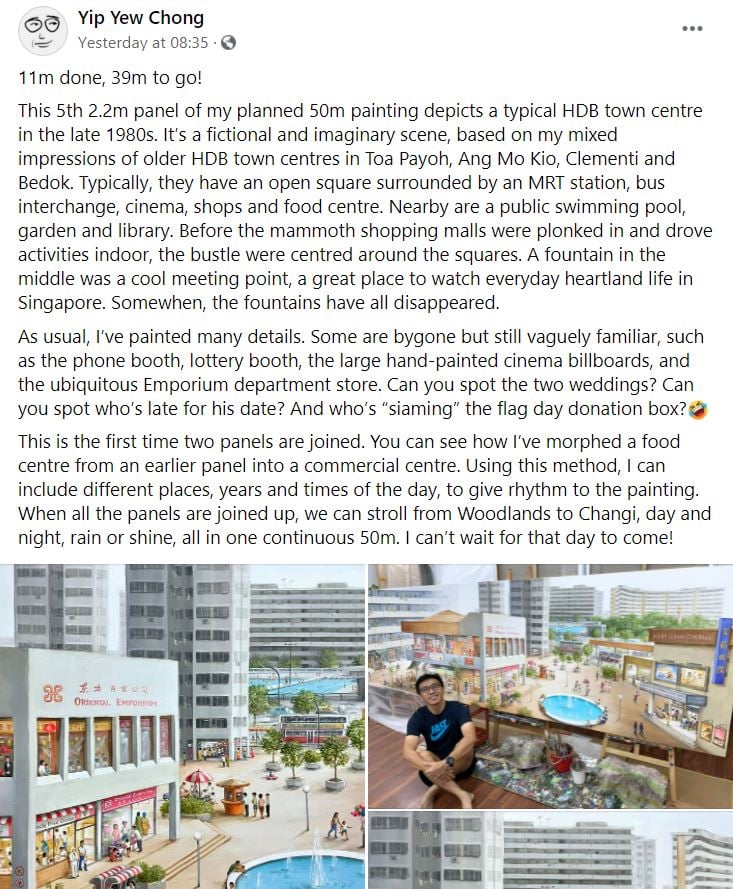 While he depicts a typical HDB town centre in the late 1980s, he puts his own creative spin to Singapore history as he masterfully morphs Singapore’s past and present together in one massive masterpiece.

According to his Facebook post, Mr Yip is currently working on his latest artwork—a 50m painting of a typical HDB town centre in the late 1980s.

He shared his progress on Sunday (26 Sep), saying that he’s completed the 5th panel of the painting. Each panel measures 2.2m, so you can imagine how gigantic the final masterpiece will be. 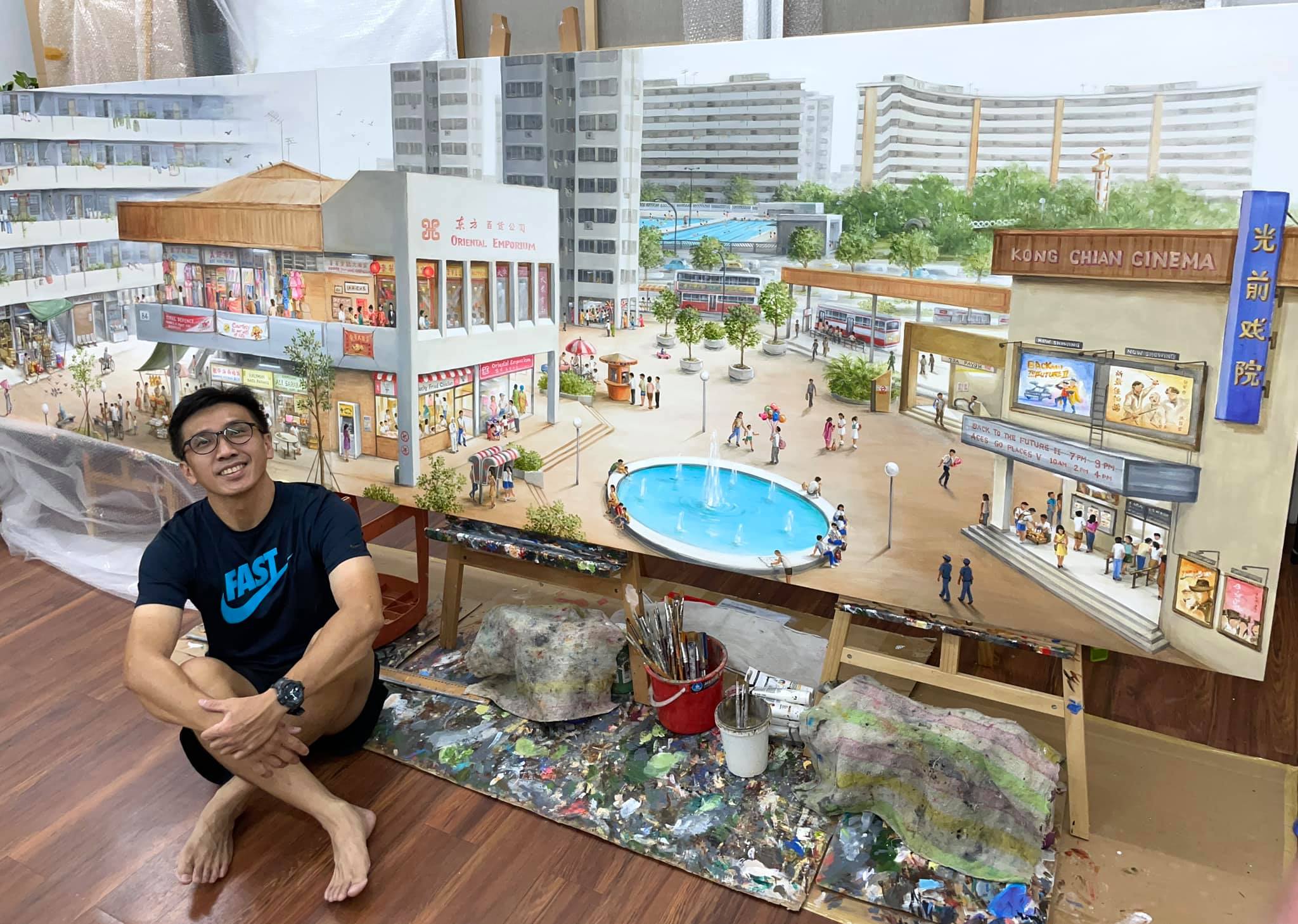 However, he also put in his own twist of how he imagined the late 80s to be. Hence, he placed a disclaimer that the painting is a fictional and imaginary scene based on his own mixed impressions.

The iconic Oriental Emporium and Kong Chian Cinema, which are now defunct, were the most obvious in his painting. Before Singapore was filled with shopping malls, people mainly gathered around the squares. 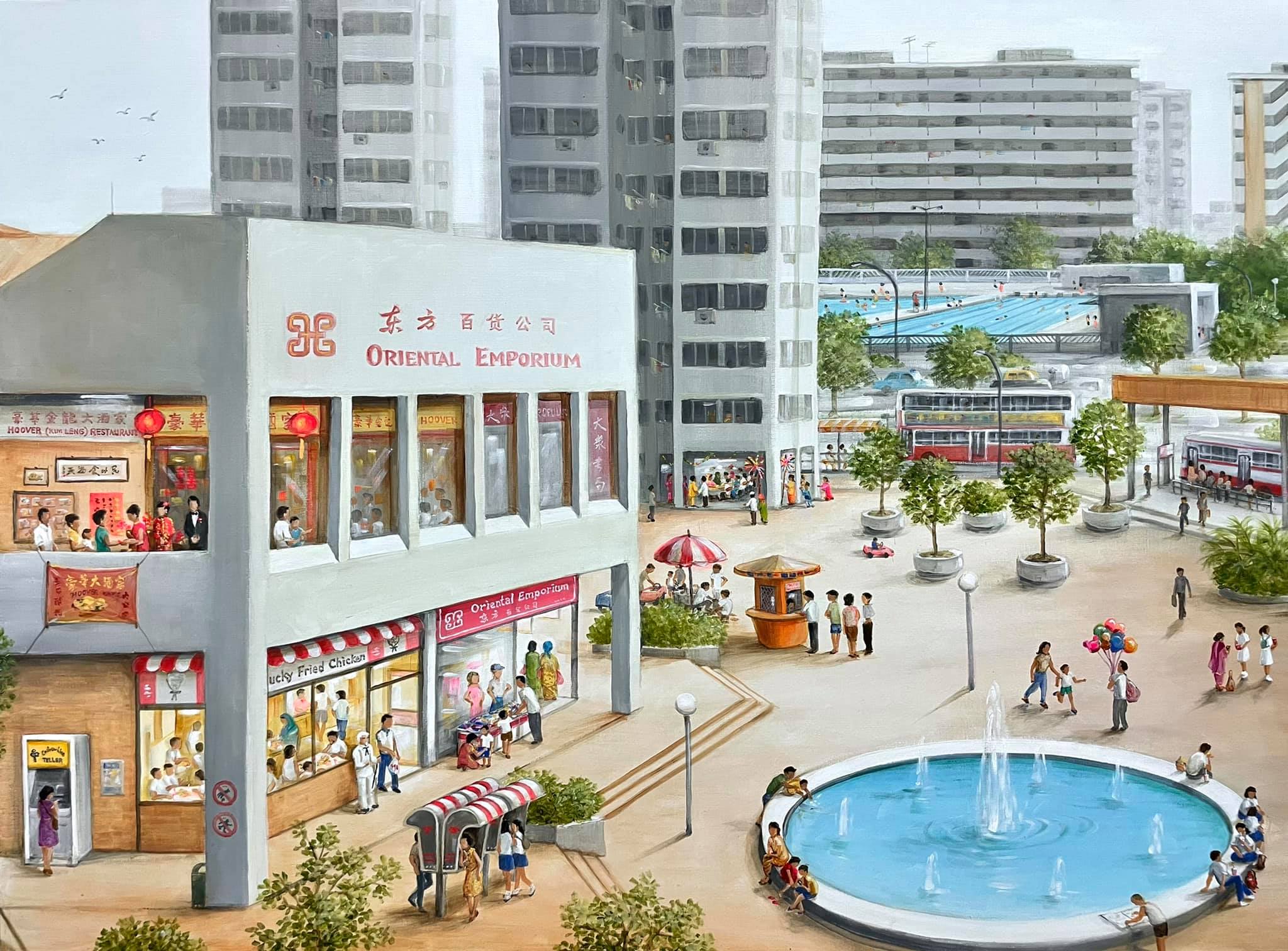 Mr Yip also painted an eye-catching bright blue fountain, which he described as a “cool meeting point” for people back then.

Though it was a great place to people-watch, Yip noticed all the fountains had somehow disappeared through the years.

Detailed painting features bits and pieces of events going on

Mr Yip took pictures of different parts of the painting to show the details he added. Though some sights are no longer around, others are still vaguely familiar.

Some might relate to this part of the painting where he shows a man trying to avoid Flag Day donations. 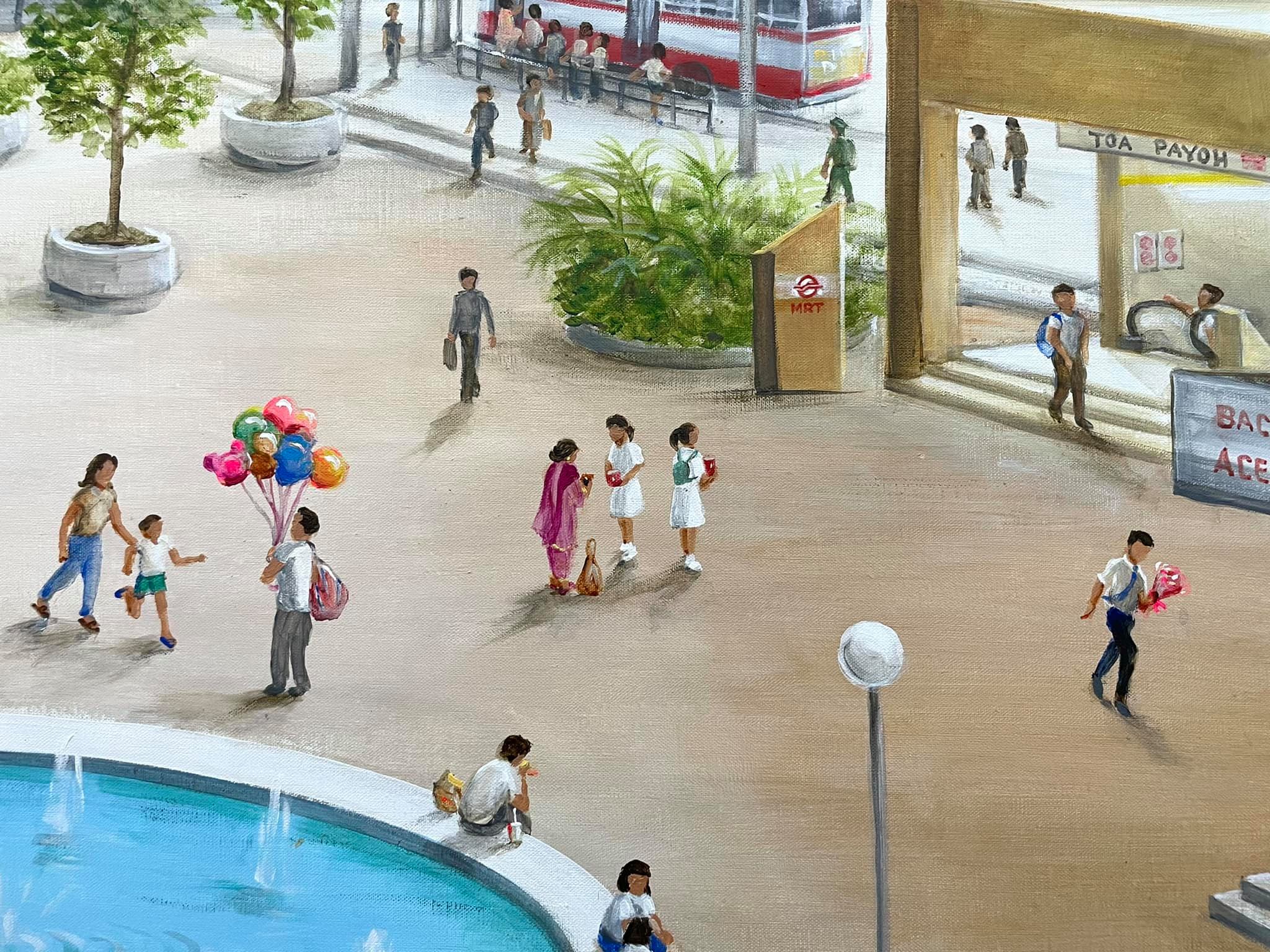 In the next scene, a guy seems to be rushing to meet his date, who is perhaps the lady in yellow looking at her watch. While the painting is supposed to depict the 1980s, Mr Yip wants to capture evergreen stories that people can relate to today. 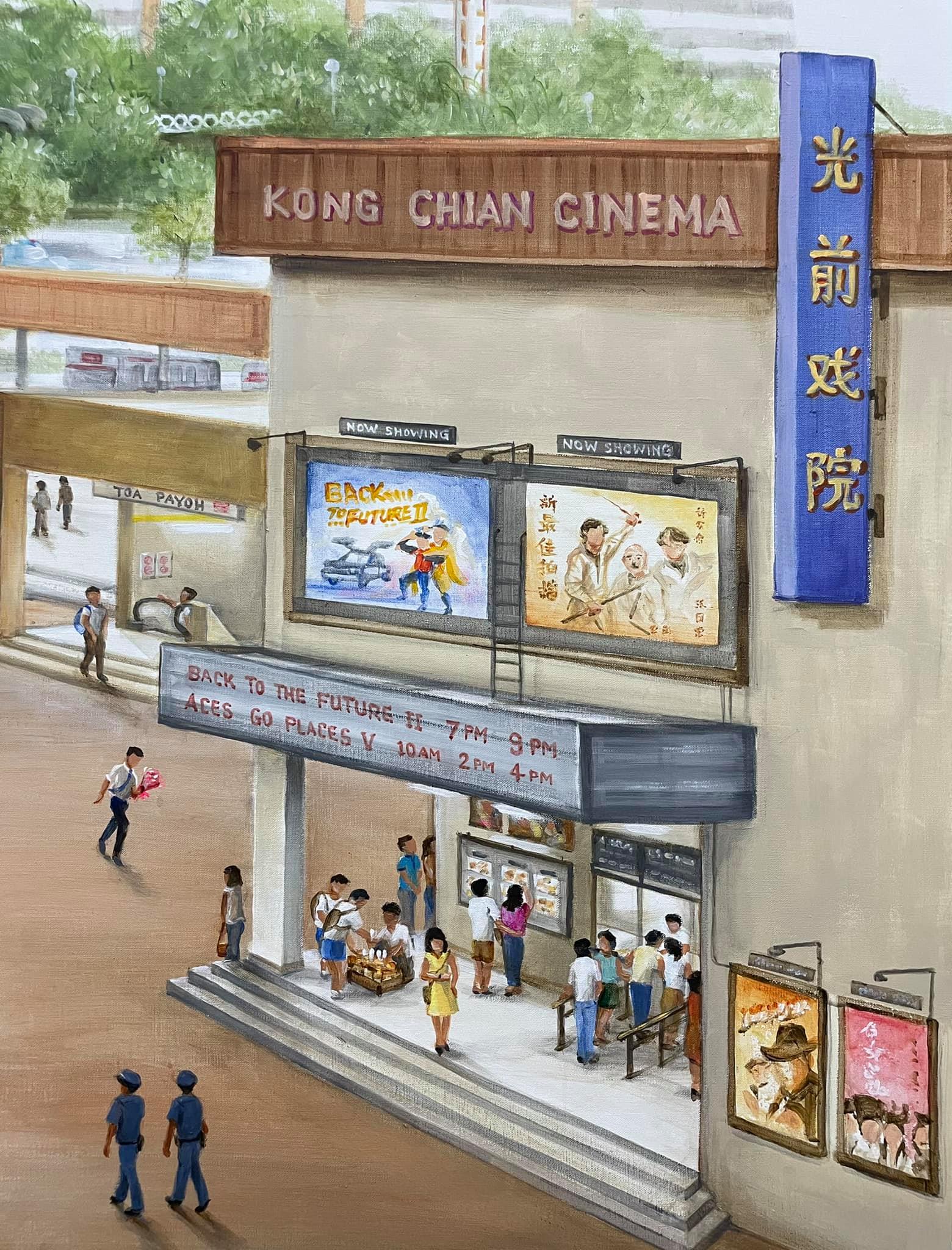 The Oriental Emporium bustled with events – we spot a crowded KFC on the first level and a wedding reception on the second. 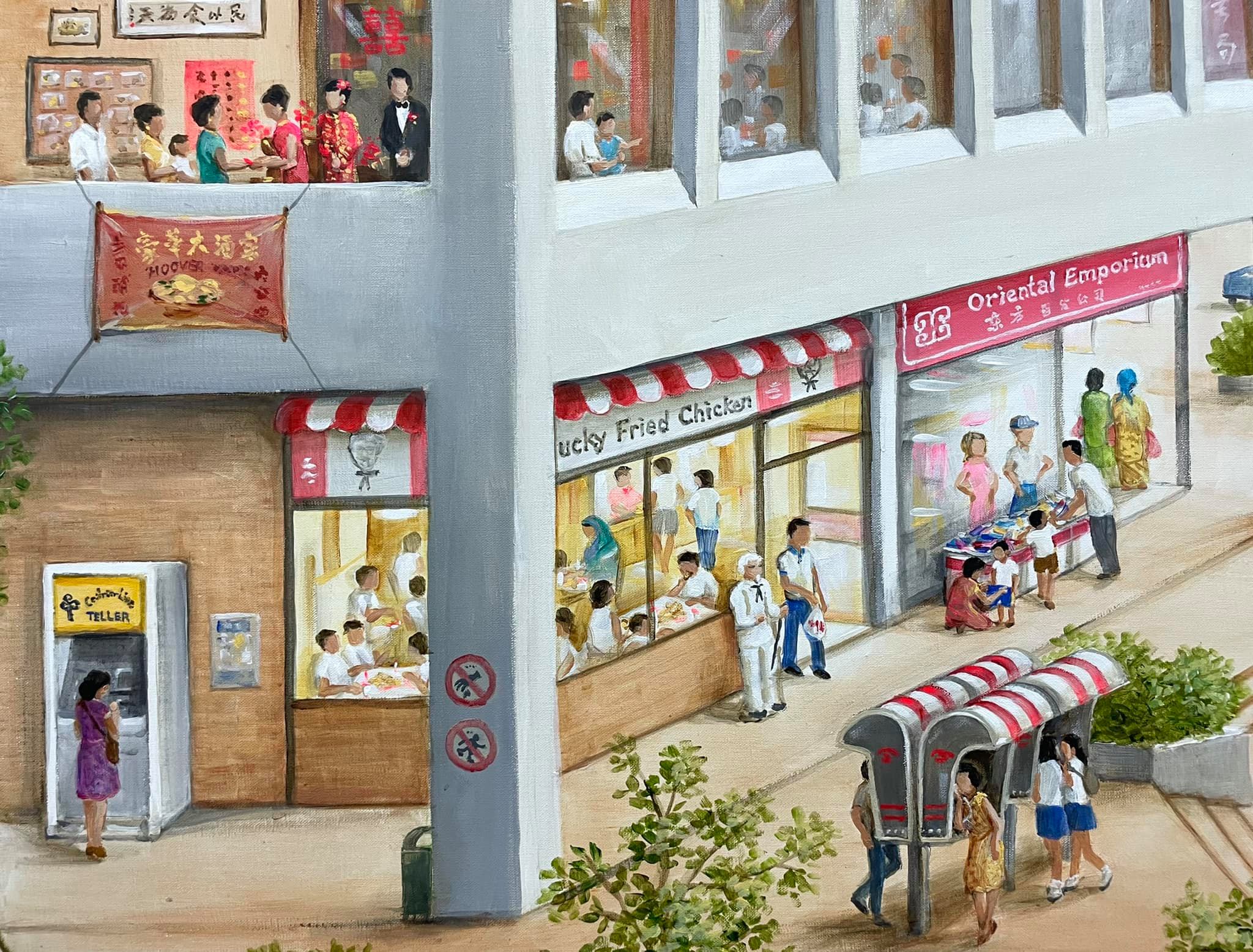 We can also see a Malay wedding at an HDB void deck in another part of the painting.

However, millennials might find this next feature an unfamiliar sight—a standalone booth selling lottery tickets, what we now know as Singapore Pools. 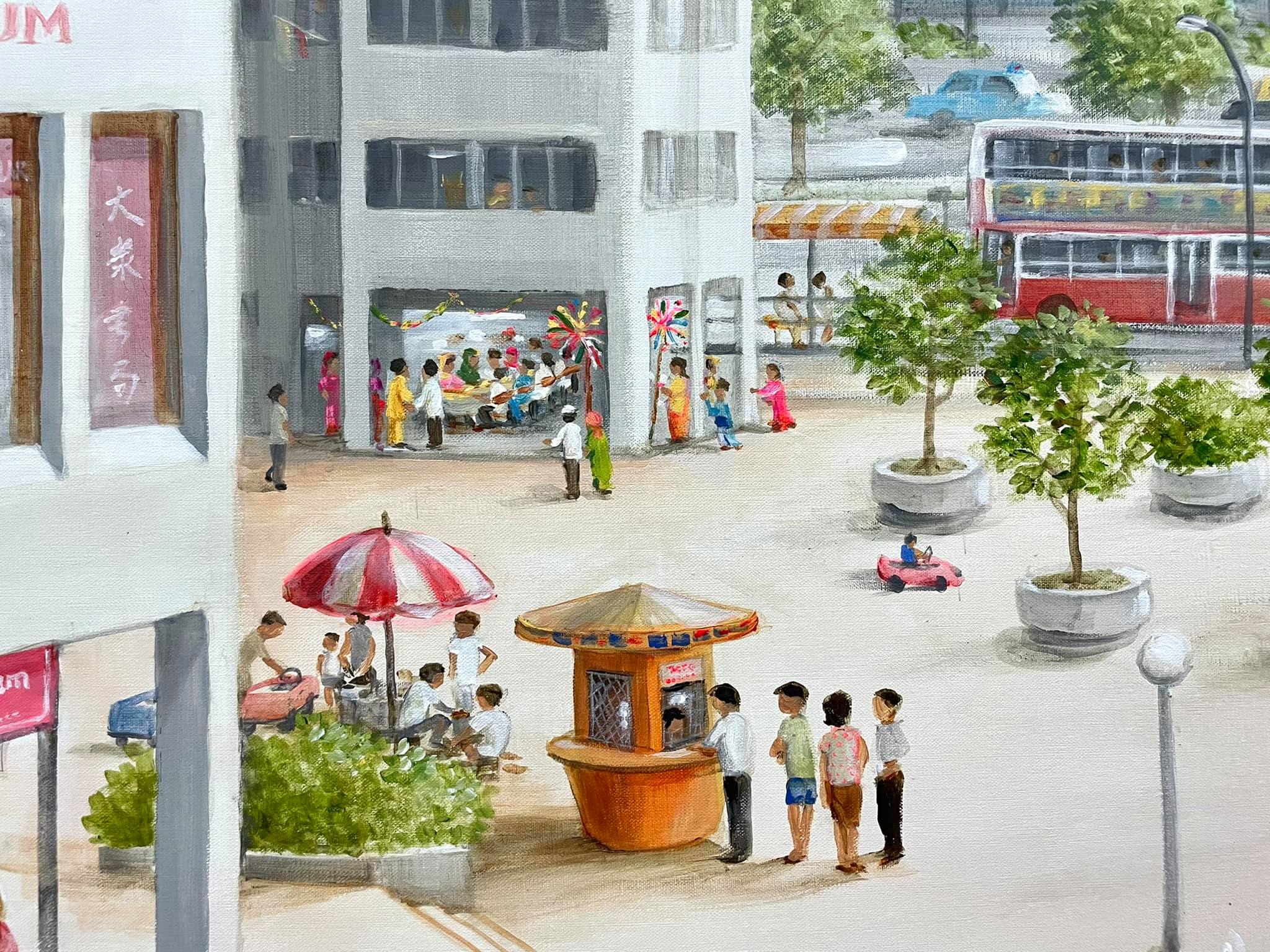 As if the painting wasn’t mesmerising enough, Mr Yip included a food centre from his earlier panel into the commercial centre. 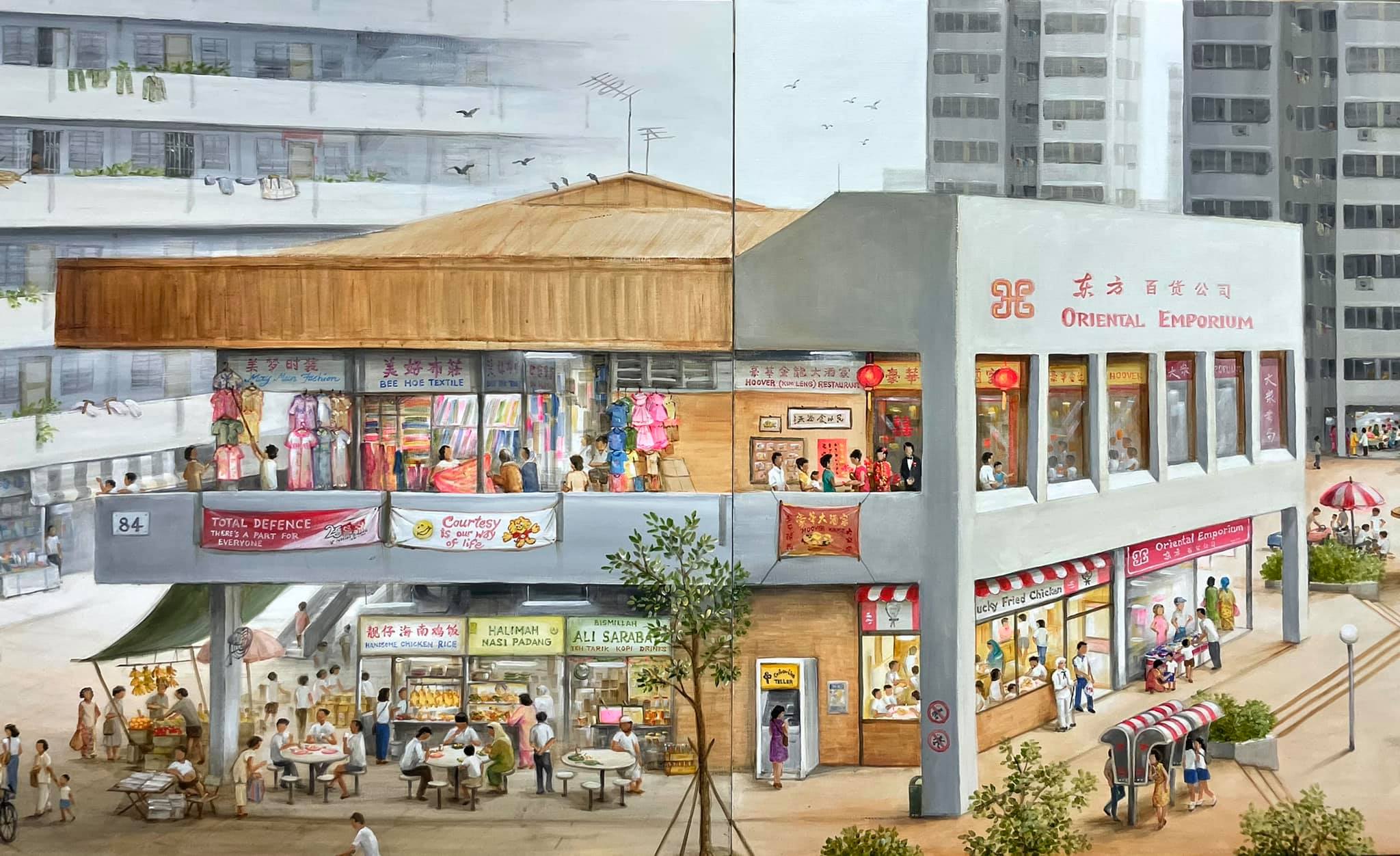 The combination of the panel merged both old and new – a modern Singapore on the left, transitioning into the nostalgic 1980s.

Mr Yip explained he wanted to include different places, years and times of the day to give rhythm to the painting.

Hence, by the time he finishes his last panel, viewers will be able to enjoy a “stroll” from Woodlands to Changi, day and night, rain or shine, all within one painting.

Immersing ourselves in Singapore’s rich culture

Seeing Singapore throughout the ages can allow us to immerse in the country’s rich culture, and see how far we’ve come.

This is especially for the younger generation who aren’t around yet to experience Singapore life in the olden days.

However, for those who did, we believe Mr Yip’s painting would be a nice trip down memory lane.

We’re excited to see his final panel, which will eventually piece sights of Singapore throughout the years together. It would certainly be a satisfying experience for both Mr Yip and us.