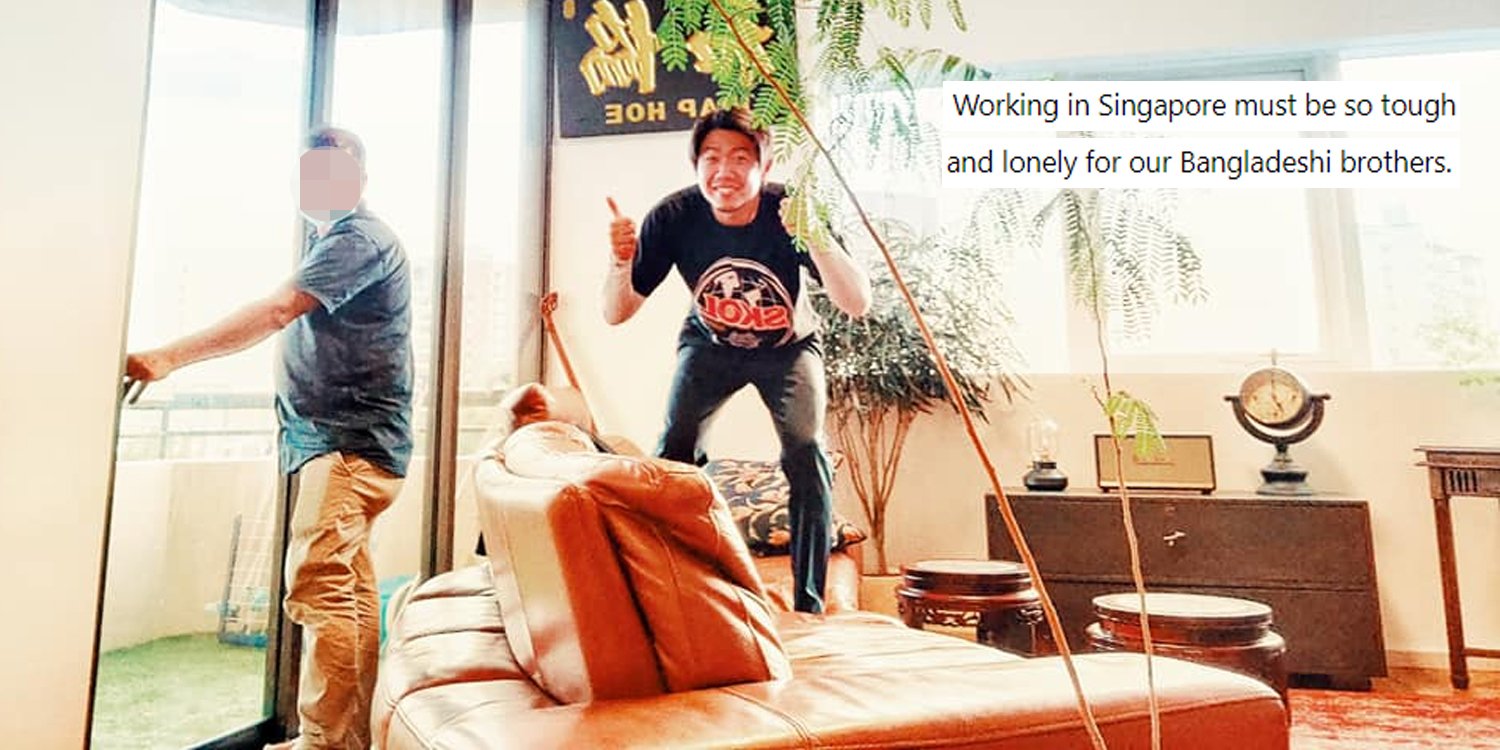 Though migrant workers have contributed a lot to make our lives more comfortable, not many Singaporeans may be aware of their predicaments working far away from home.

Migrant Worker Makes Short Film Of Life In S’pore, Shows Struggle To Get By On His Salary

Recently, a man had the opportunity to learn more about the life of a Bangladeshi handyman whom he had engaged to repair a damaged door.

As the worker shared about his half-paralysed daughter back home and the problems he faced while working in Singapore, the client couldn’t help but find himself on the brink of tears. 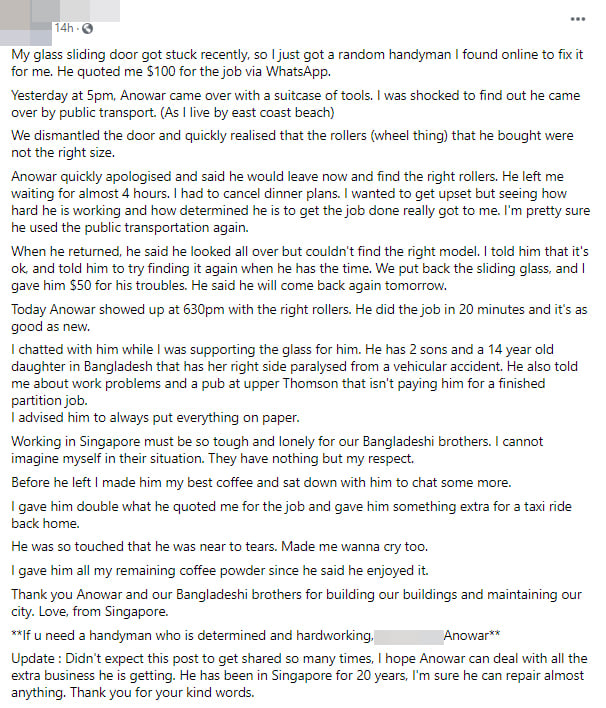 In the post, Mr Ke shared how one of his sliding doors got stuck recently. Determined to have it fixed, he engaged a handyman online who subsequently quoted him $100 for the job.

On Thursday (4 Feb) evening, the handyman came over with a suitcase of tools. After finding out that he had travelled via public transport, Mr Ke was rather shocked. 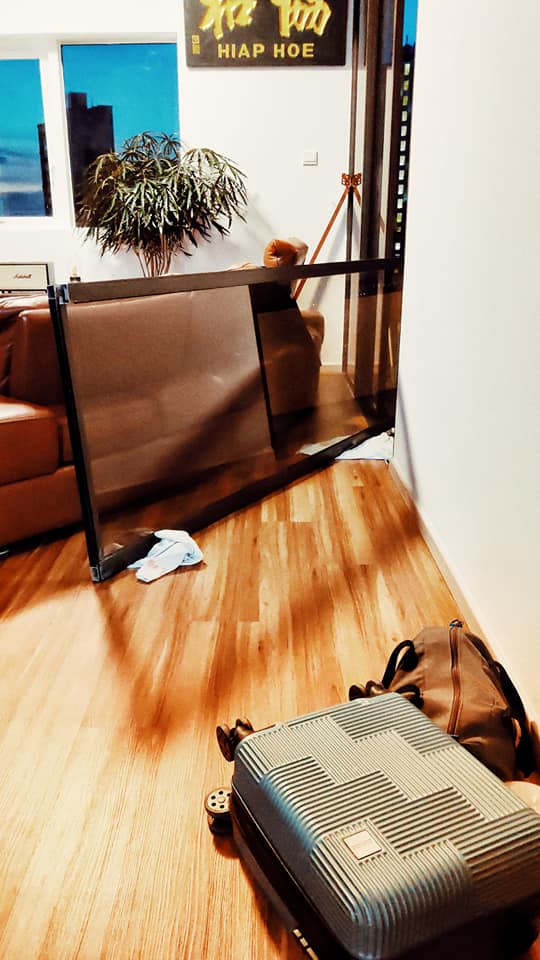 Soon after dismantling the door, the handyman discovered that the rollers he had were not of the right size.

He promptly apologised and left the house in search of ones that would fit.

As he was allegedly away for close to 4 hours, Mr Ke had no choice but to cancel his dinner plans.

When the handyman eventually returned, he claimed that he couldn’t find the right kind of rollers despite searching everywhere.

Though Mr Ke was initially upset, the handyman’s work ethics and determination somehow quelled his anger.

He paid the handyman $50 for his troubles that day.

On Friday (5 Dec) evening, the handyman returned, this time with the right rollers.

Unlike the day before, he managed to fix the sliding door within just 20 minutes. 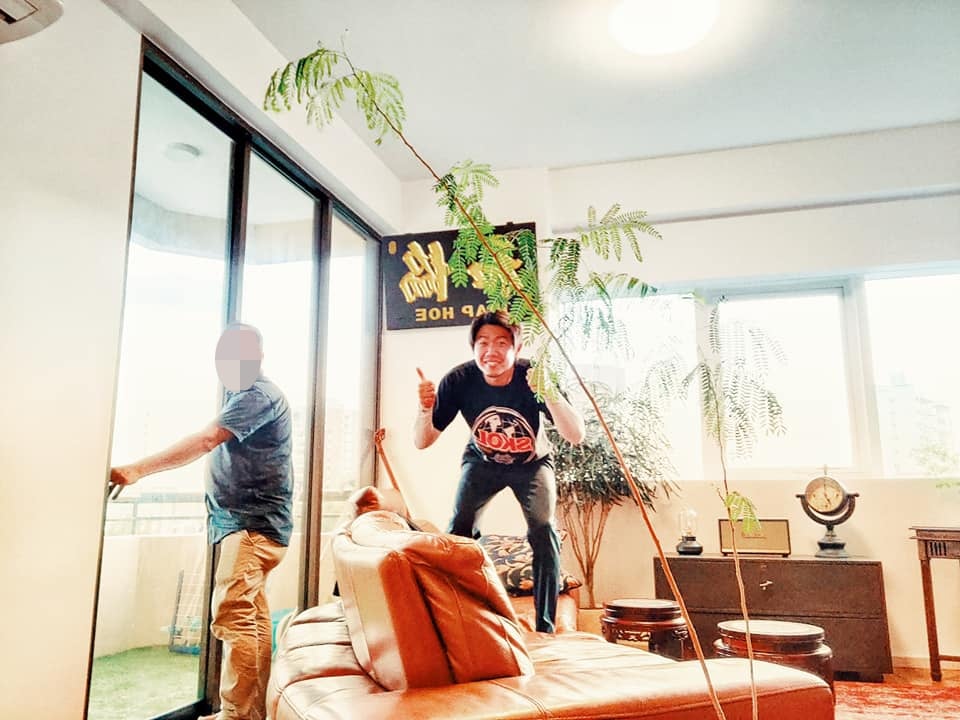 While helping to hold the glass panel, Mr Ke had a chance to learn more about the handyman, named Anowar.

In order to make a living in Singapore, Anowar had no choice but to leave behind his children — 2 sons, and a daughter who was left half-paralysed after a vehicular accident.

Work wasn’t always smooth sailing, as he shared about a pub that reportedly refused to pay for a job he finished.

Later, Mr Ke even made Anowar a cup of coffee as they continued their conversation.

After their meaningful conversation, Mr Ke paid Anowar double the quoted fees and some extra to cover his cab ride home.

Anowar was apparently so touched by the gesture that he nearly teared up.

Thanked migrant workers for their contributions

Ending his post, Mr Ke thanked Anowar and other migrant workers for their contributions to Singapore, saying that,

Working in Singapore must be so tough and lonely for our Bangladeshi brothers. I cannot imagine myself in their situation. They have nothing but my respect.

Migrant workers & Singaporeans have our similarities

Indeed, Singapore owes much of what she is today to the migrant workers who travelled great distances to make a living.

Though we often see them around, many of us know little about their lifestyle and sacrifices they have to make.

It’s only through intimate conservations like these that we realise that though our nationalities are different, we have more similarities than differences.

Kudos to Mr Ke for opening his heart and offering a listening ear to Anowar — we hope others will be inspired to do the same.

Have you heard similar tales from migrant workers in Singapore? Share them in the comments below!