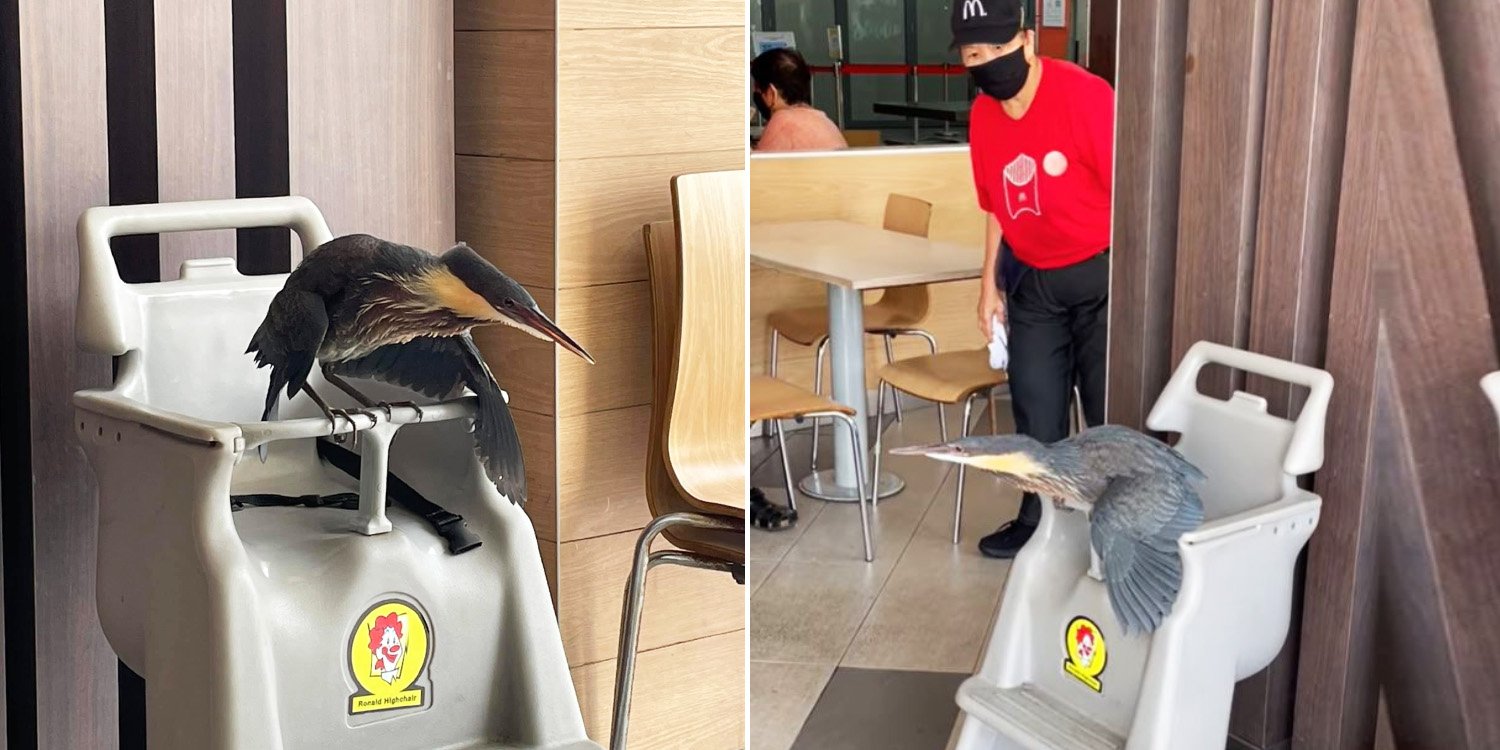 In our garden city, residents have in recent times come to share the same spaces as wildlife occasionally.

The encounters may be dangerous to humans, like pythons and wild boars. But at times, they can be a treat, as we get to come up close and personal with rarely sighted creatures.

Yesterday, someone spotted a gorgeous bird on the ground near McDonald’s in Tampines West, before it flew off after hanging around the outlet for over an hour. 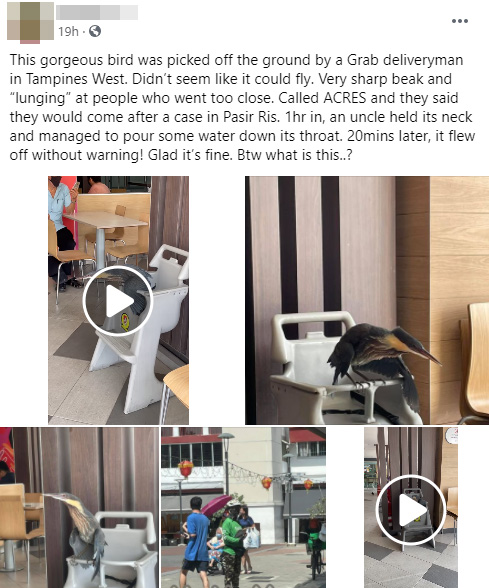 Turns out, it was one of the super elusive bird species in Singapore known as the Black Bittern.

According to a post in Singapore Wildlife Sightings Facebook group, a delivery rider in Tampines West had picked the bird up from the ground yesterday (3 Mar).

For some reason, it didn’t seem like it could fly. So the man placed it in a kid’s high chair. 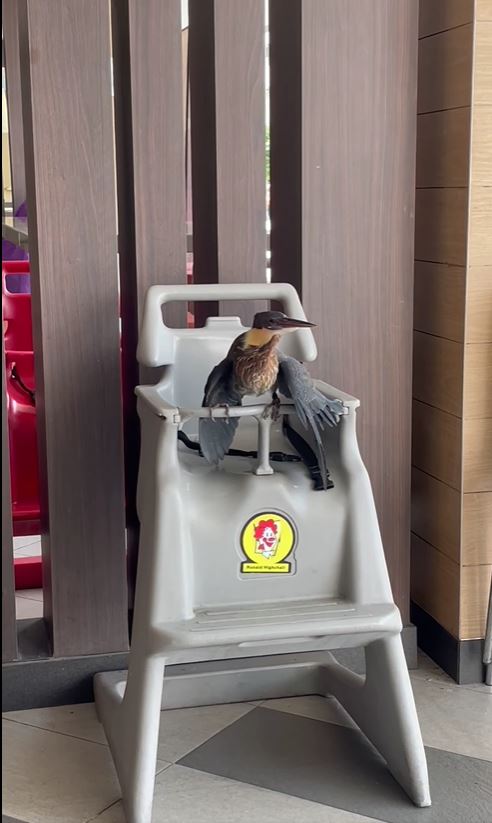 Being in uncharted territory, it was likely that the bird was afraid. The OP described its hostile demeanor, as it apparently “lunged” at people who got too close. 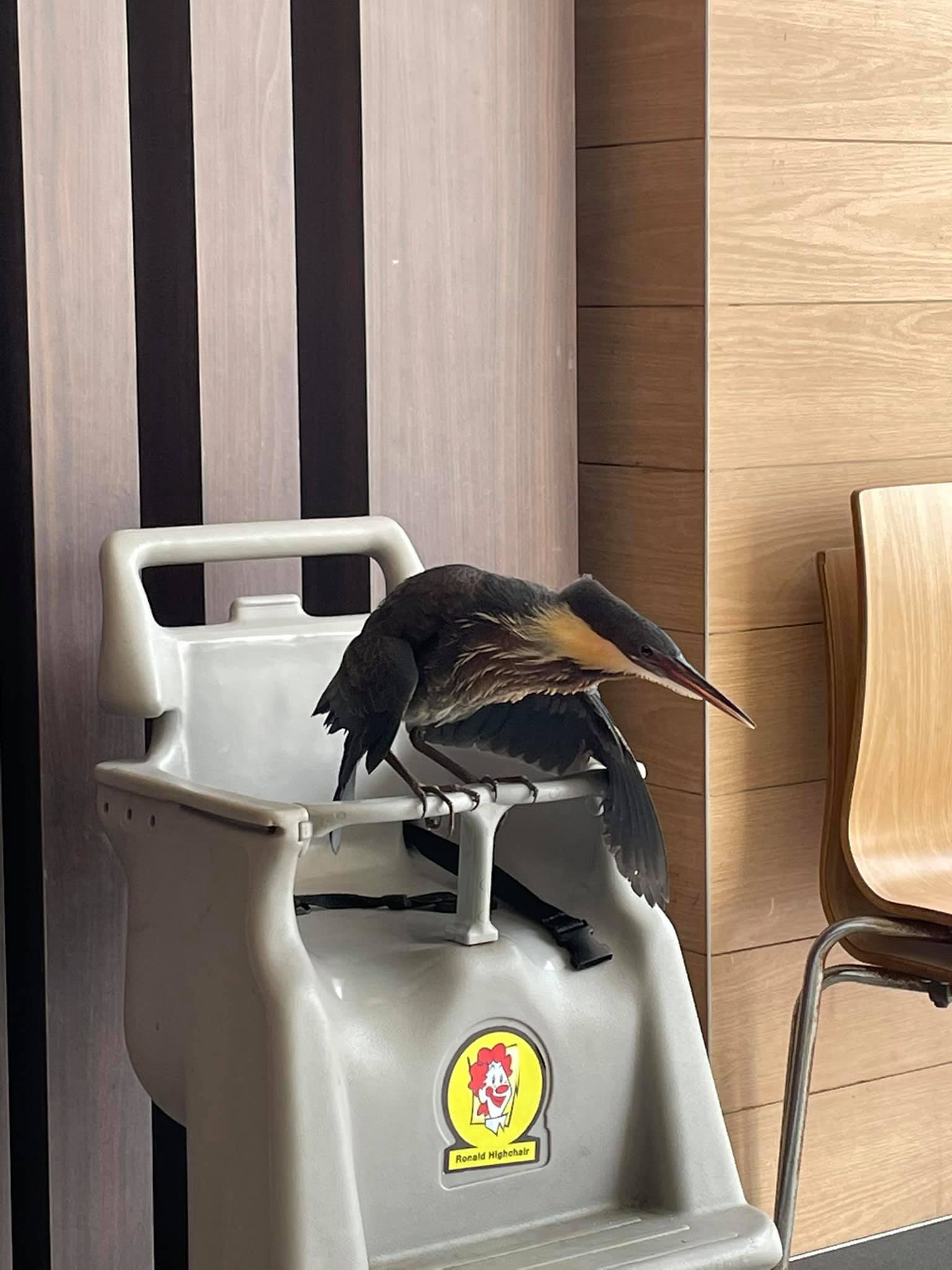 The OP reached out to the Animal Concerns Research and Education Society (ACRES), who said that they would head over after handling a case in Pasir Ris. 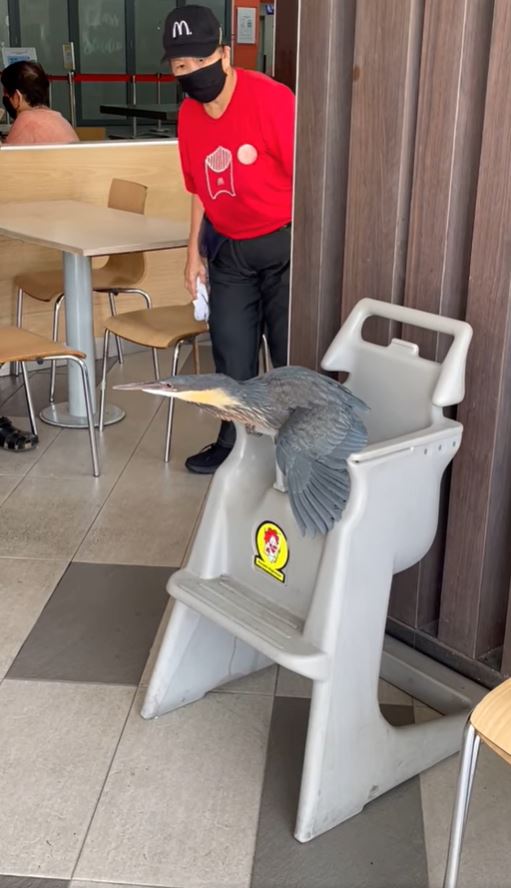 The bird apparently sat there for about 1 hour and 20 minutes, before eventually flying away.

An uncommon migrant in Singapore

We’re used to seeing our pigeons and mynahs, so spotting a huge bird with an unusually long beak in our urban jungle definitely opens our eyes.

According to Singapore Birds Project, the glorious creature chilling at McDonald’s in Tampines yesterday (3 Mar) was a Black Bittern, and its status is currently an “uncommon migrant”. They are found mostly from the Indian subcontinent to southern China, Southeast Asia, and northern Australia.

We believe the species to be rather elusive, as the bird’s behaviour is described as “often secretive, hiding in reeds for long periods of time.”

In Singapore, there’s a chance that you could spot it at natural destinations like:

Definitely not McDonald’s, so we do wonder how the bird managed to get here in the first place.

Shy animals that are susceptible to stress

In response to MS News‘ queries, ACRES confirmed that they did receive a call for a black bittern, and said they are shy animals that are susceptible to stress if handled.

Here is the rest of their statement:

We get an increased number of calls for them during the migratory season. Unfortunately, they can be prone to window strikes, which often causes them to be stranded in residential areas.

We understand that this individual managed to recover and fly off just as we were parking our vehicle. We urge the public to not handle these birds on their own and to call us for advise.

If you find a stranded bird, feeding it with food or water is not advisable. The ACRES 24-hotline is 97837782.

Netizens were having a field day in the comments, as they found it funny that a wild bird had ended up being in a fast food joint. It was even perched on a kid’s high chair.

Someone said it obviously wanted a Happy Meal.

If it was there for McGriddles, then unfortunately, it was one day too early, according to one netizen, as McGriddles is only back from today (4 Mar) onwards.

This netizen seems to think all that fluttering around in the heat could have compelled the little fella to come out and seek air conditioning.

If it could fly away in the end, it’s likely the bird wasn’t injured at all.

Glad the bird could fly away safely

As the bird was grounded for over an hour, it is easy for us to assume that it could have been injured. But thankfully, that didn’t seem to be the case as it could fly away in the end.

We hope it managed to find its way back to its home. Stay safe, Black Bittern.