Policemen can be cool too ok

You know what they are. Such memes typically encapsulate some anti-social behaviour that perfectly normal human beings engage in — humans except the hypothetical Bill.

Because Bill is smart.

Bill is also apparently one of the most passive-aggressive people in the world.

What do you get when you mix a police centre with memes?

With Chinese New Year around the corner, Sengkang Neighbourhood Police Centre decided to put their own spin on this now-popular meme.

5 minutes on MS Paint, and more than 1,100 shares later, the good people of Sengkang found themselves in the center of a viral meme.

But that’s not all they did to prove their internet-savviness.

Our boys in blue caught wind of the situation, and posted this comment on the image. 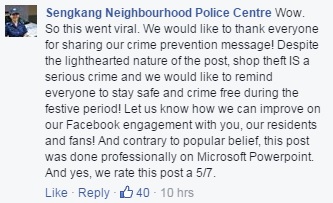 The 5/7 score, is of course, in reference to yet another internet phenomenon — we’ll just let you read about that one here.

To other public services, be like Sengkang Neighbourhood Police Centre.