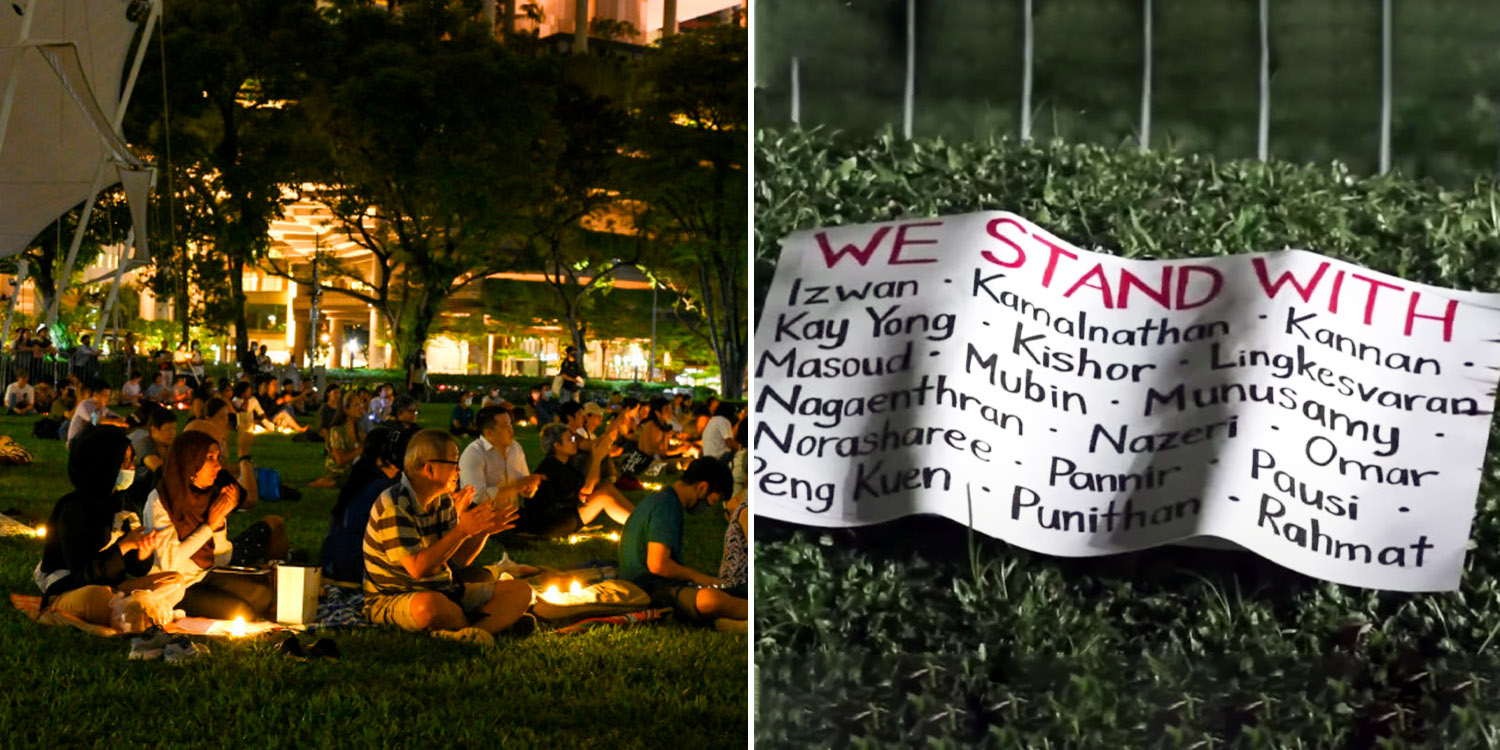 At the moment, there are reportedly more than 50 people on death row in Singapore. Amongst them are Nagaenthran Dharmalingam and Datchinamurthy Kataiah.

On Monday (25 Apr) evening, over 400 people turned up for a candlelight vigil for the two inmates at Hong Lim Park. 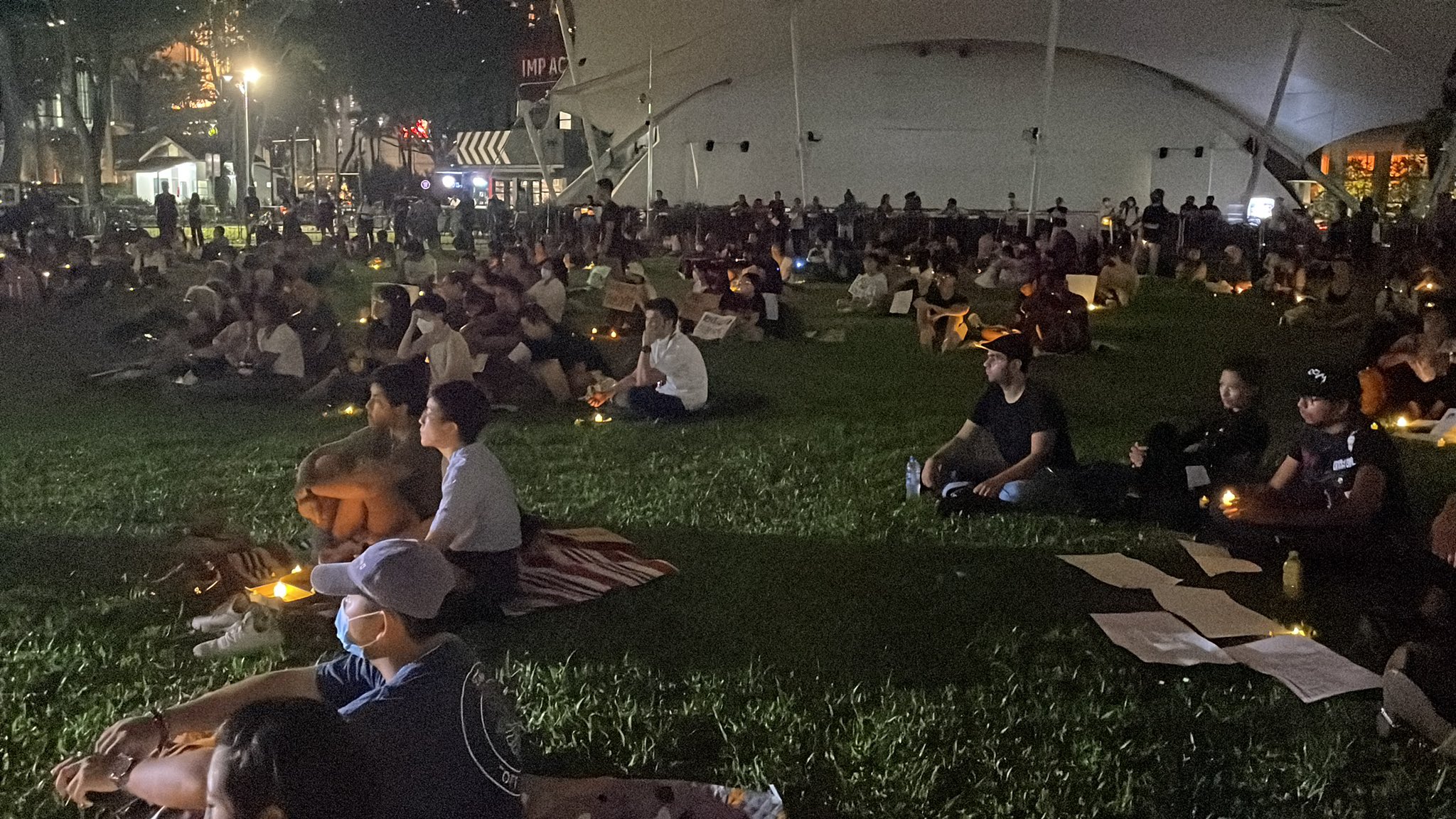 The United Nations (UN) Human Rights Office has since called for a stay of execution for the Malaysian nationals.

400 attendees at candlelight vigil for inmates

The vigil is a protest against the looming executions of Nagen, 34, and Datchina, 36. 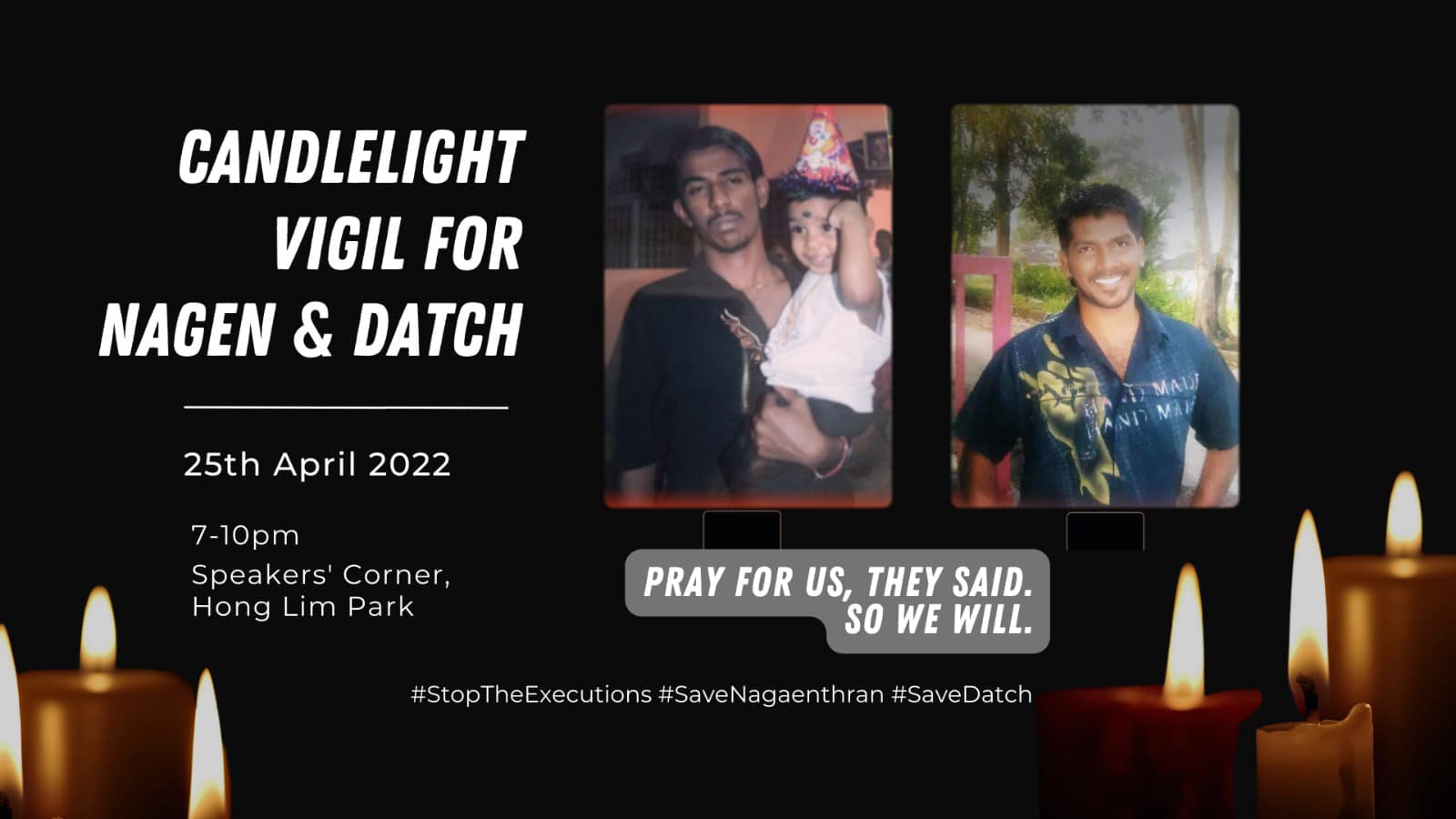 Speaking for both himself and Nagen, personal words that Datchina wrote were read to the crowd.

As various speakers and performers took to the stage, attendees lit up the park with electronic candles and torches. During the vigil, the crowd chanted, “No more blood on our hands”, “Justice for Nagenthran”, and “Justice for Datchina”.

Led by activists, they also shouted that they wanted freedom for the death row inmates.

Pictures of the event show people holding up signs that read “Abolish the death penalty” and “Don’t kill in our name”. 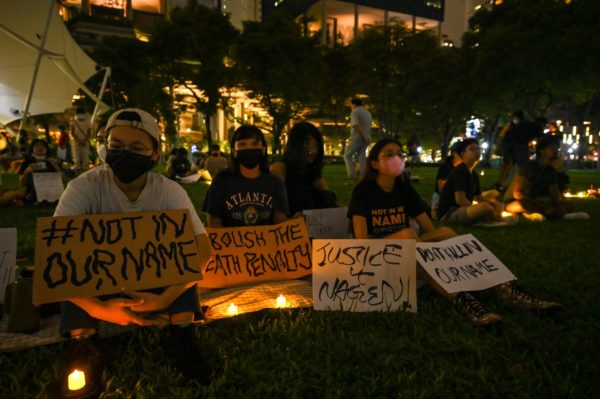 Around the park were signs showing the names of those on death row in Singapore. 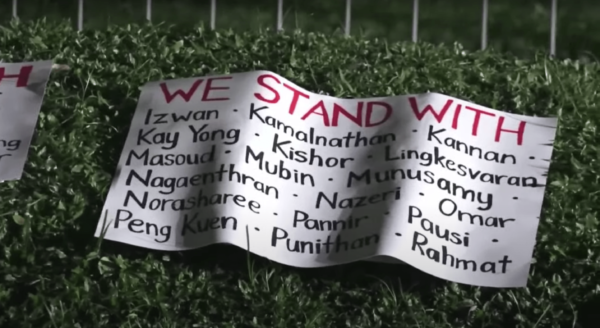 According to an activist, Nagen’s brother, as well as Datchina’s mother and sister, were also in attendance at the vigil outside the barricades.

Only Singapore citizens and Permanent Residents are allowed to participate in events at Hong Lim Park.

Both inmates’ executions scheduled this week

Nagen’s execution is scheduled to take place on Wednesday (27 Apr), while Datchina’s will be on Friday (29 Apr), Reuters reports.

Nagen’s case previously drew international attention as he was found to have an IQ of 69. This is recognised as an intellectual disability.

Nagen was arrested at age 21 in 2009 for trafficking 43g of heroin into Singapore. He was reportedly coerced into committing the crime.

Last month, the 34-year-old lost his final appeal against the execution.

The other Malaysian facing execution, Datchina, was arrested in 2011 for trafficking 45g of diamorphine.

UN calls for stay of execution

On the same day of the vigil, the UN Human Rights Office called for a stay of execution for the two Malaysians.

We urge #Singapore🇸🇬 to commute the sentences of Dharmalingam & Kataiah, due to be executed on Wednesday for drug offences.

The UN also stated that there had been an “alarming acceleration in execution notices” in Singapore in 2022.

Besides the Malaysian pair, at least three others – Roslan bin Bakar, Rosman bin Abdullah, and Pannir Selvam Pranthaman – are at risk of receiving the death sentence. All were found guilty of drug-related offences.

More than 50 others are reportedly on death row in Singapore.

A clear message to authorities

While many have recently called to abolish the death penalty, the issue remains a divisive one in Singapore.

Nonetheless, activists and the attendees at the vigil are certainly sending a clear message to authorities about their thoughts.