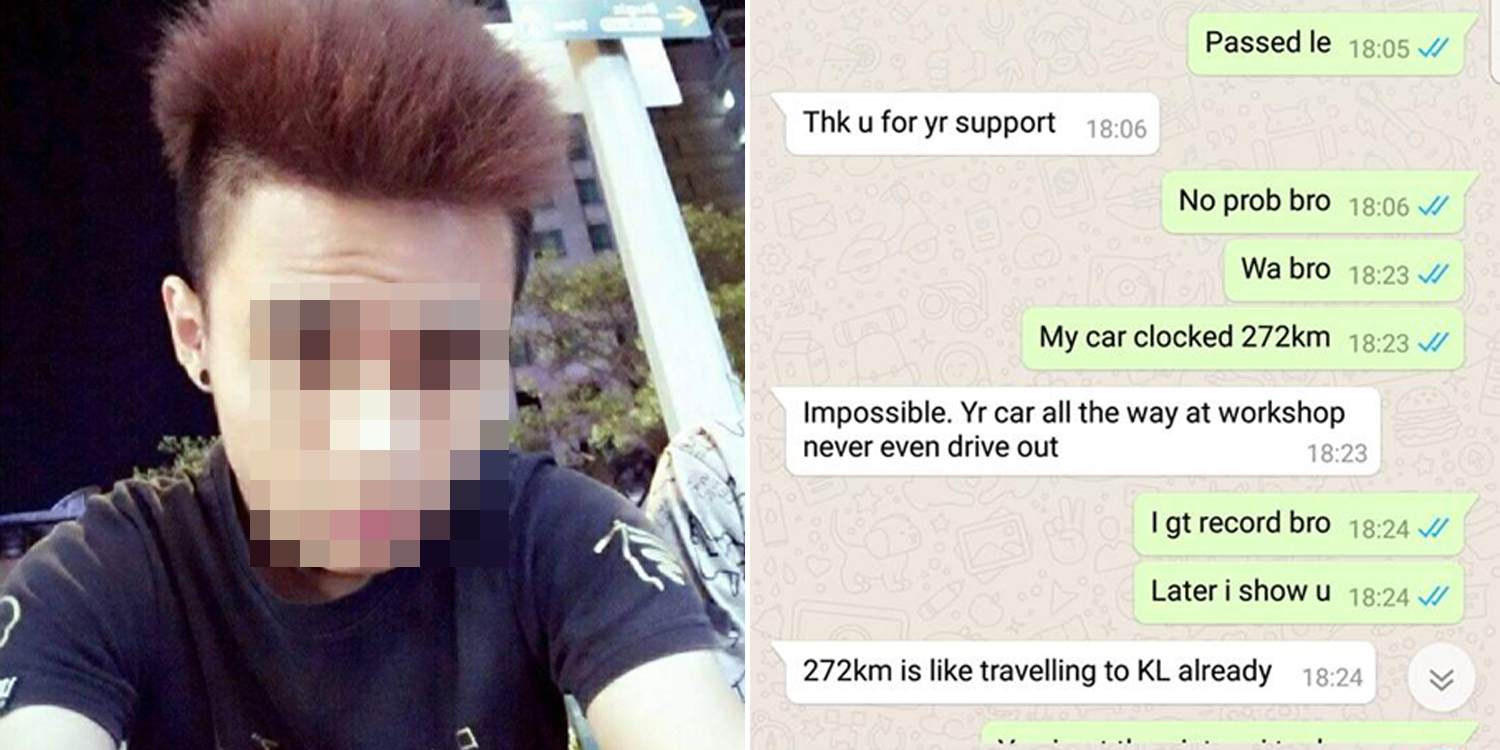 The car was taken for a 273km joyride in Malaysia.

Update (26 Dec): GlozZ Factory has issued an apology to their client, Mr Eric Lau via Facebook. Here’s their statement in full.

Glozz Factory sincerely apologize to Car owner Mr Eric Lau and his family for this unfortunate event. We understand the inconvenience and trouble that has caused to Mr Eric Lau. This is a heavy lesson learnt by Glozz Factory from such an unexpected event. We are also very fortunate that Mr Lau had kindly accepted us to make this necessary compensation. From here, I would like to thank Mr Lau for his graciousness towards us.

In addition to this, we too want to clarify to everyone about this incident. Glozz Factory took over Mr Lau’s car and parked in the workshop for works to be done. Shawn Chng, who is NOT Glozz Factory staff but from Chng Brother Motor Services, sneaked into our workshop in the night and quietly drove off Mr Lau’s car without permission.

We have lodged a police report for this case and will let the Law handle accordingly.

As such, William Chng (Owner of Chng Brother Motor Services) together with his son, Shawn Chng and myself met up with car owner, Mr Eric Lau to have a private settlement. As per discussion, William Chng agreed to compensate Mr Lau.

However, William and his son made Mr Eric Lau waited for 2 months with no actions done. When we questioned William Chng about the compensation again, his answer was just “Lawyer Preparing” and ignoring the fact that we need to expedite the settlement. Therefore, I stood forward to bear all the compensation ourselves.

Through this post, I hope the public will have a clearer picture of this unfortunate case. We, Glozz Factory, have been always been sincere and always strive for the best
for our customers.

The car grooming business is one that’s largely based on trust.

After all, clients have to leave their cars at the workshop for days or even weeks without supervision.

So it shouldn’t come as a surprise that a car owner by the name of Mr Eric Lau was enraged to find his car misused after collecting it from a car groomer.

On Sunday (23 Dec), Mr Lau wrote a lengthy Facebook post warning other car owners about the errant car groomers that he had the misfortune of dealing with. According to Mr Lau, on 3 Nov, he brought his car to GlozZ Factory Mobile Car Grooming Services for spray painting and an internal grooming job.

Before handing his car over to the groomers, Mr Lau took a photo of his odometer for precautionary reasons.

For the uninitiated, an odometer is an instrument used to measure the distance travelled by a vehicle.

When Mr Lau collected his car 5 days later, he was stunned to find his odometer reading increase by a whopping 273km.

The sound system in Mr Lau’s car was also adjusted to the maximum level, and the memory card slot on his dashcam wasn’t in its original position.

Mr Goh revealed over the phone that the car was also full of cigarette ash when he was working on it the day prior to the collection.

After some investigation, Mr Goh admitted that Shawn – his business partner’s son – had taken the car for a joyride in Malaysia.

Enraged, the car owner lodged a police report and demanded to have a sit-down with Mr Goh and his business partner, Mr William Chng.

Mr Lau’s suspicions were confirmed during the meeting as the car groomers admitted that Shawn had:

Understandably, Mr Lau then demanded compensation from the car workshop owners for a breach of contract.

However, Mr Goh suggested that Mr Lau deal with Mr Chng in private, so as to protect the reputation of his business.

Mr Chng eventually agreed to compensate Mr Lau for the misuse of his car, and instructed his lawyer to prepare a private settlement letter.

When he finally answered, Mr Chng said that his lawyer required the police report in his possession to prepare the legal document, and tried to “buy” it from him.

Feeling that something was amiss, Mr Lau called the police, who informed Mr Lau that it was illegal to “buy” a police report due to confidential reasons.

Check your odometer before visiting a car workshop

MS News has reached out to GlozZ Factory and Mr Lau for more information regarding the alleged incident.

Meanwhile, let’s hope both parties find a mutually agreeable resolution to the incident.

For the rest of us, if there’s one lesson to be learnt, it’s surely the importance of checking your car’s odometer before handing it over to the car workshop.