Must Share News – Independent News For Singaporeans
Home Viral Uncle Stops Car On PIE After Accident, Gets Hit By Motorcycle While... For safety reasons, motorists might choose to stop their cars along the road shoulders following an accident, instead of parking their vehicles in the middle of the road.

A man who was involved in an alleged hit-and-run accident along the PIE recently, however, didn’t have time to do so before another unfortunate incident happened.

While standing next to his car and discussing matters pertaining to dashcam footage with an eyewitness, he was hit by a motorcycle. Car gets bumped from the side in PIE accident

Footage shared on the ROADS.SG Facebook page shows a black sedan getting dragged to its left by another black vehicle. 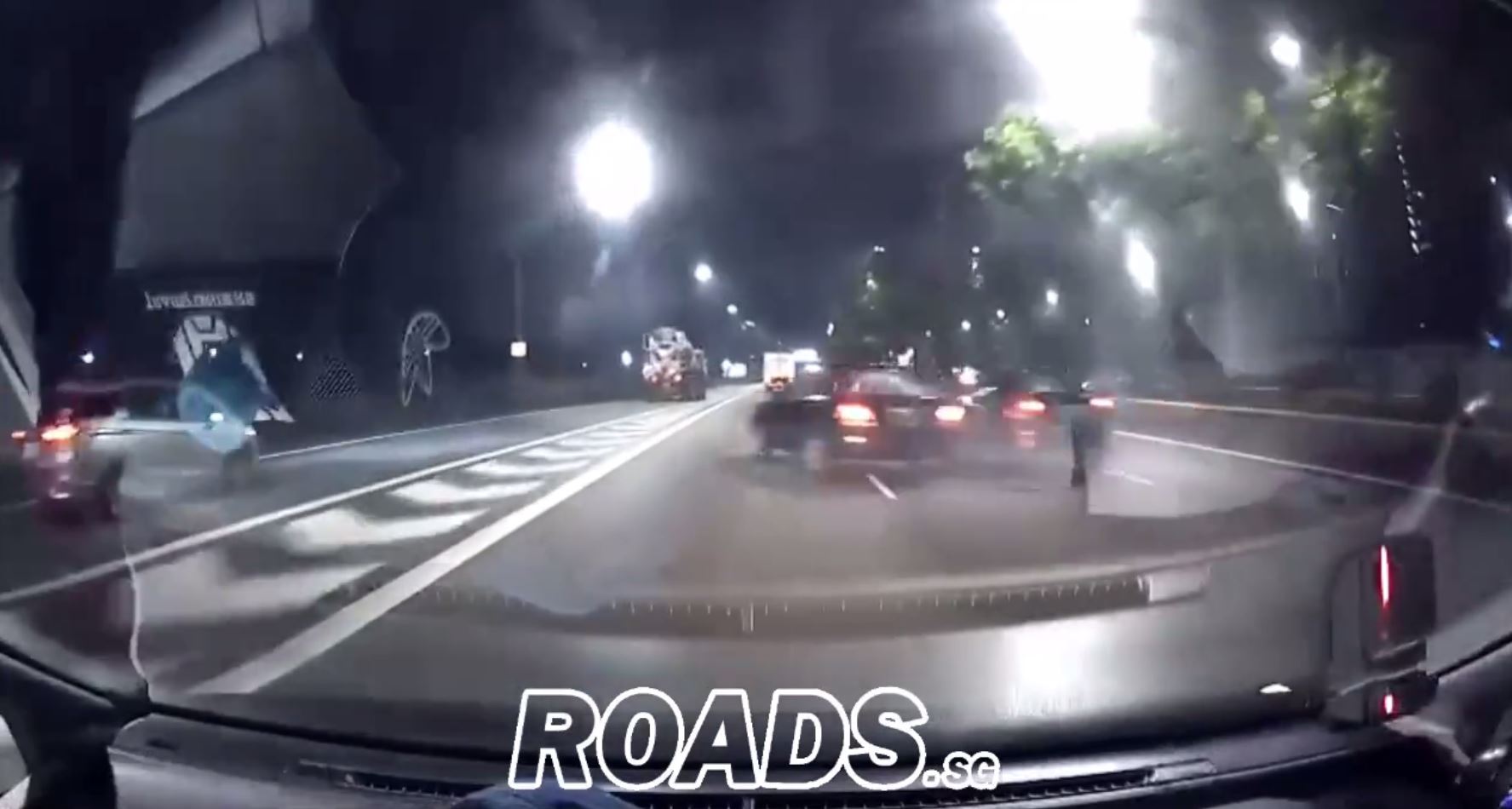 The former appeared to be travelling on the 2nd lane before it was bumped from the right by the latter.

The incident allegedly took place on the eastbound PIE near Toa Payoh at around 1.07am on Friday (16 Apr).

The sedan could have easily collided into a cement mixer if not for the driver’s speedy reactions.

Despite the mishap, the other vehicle sped off quickly. 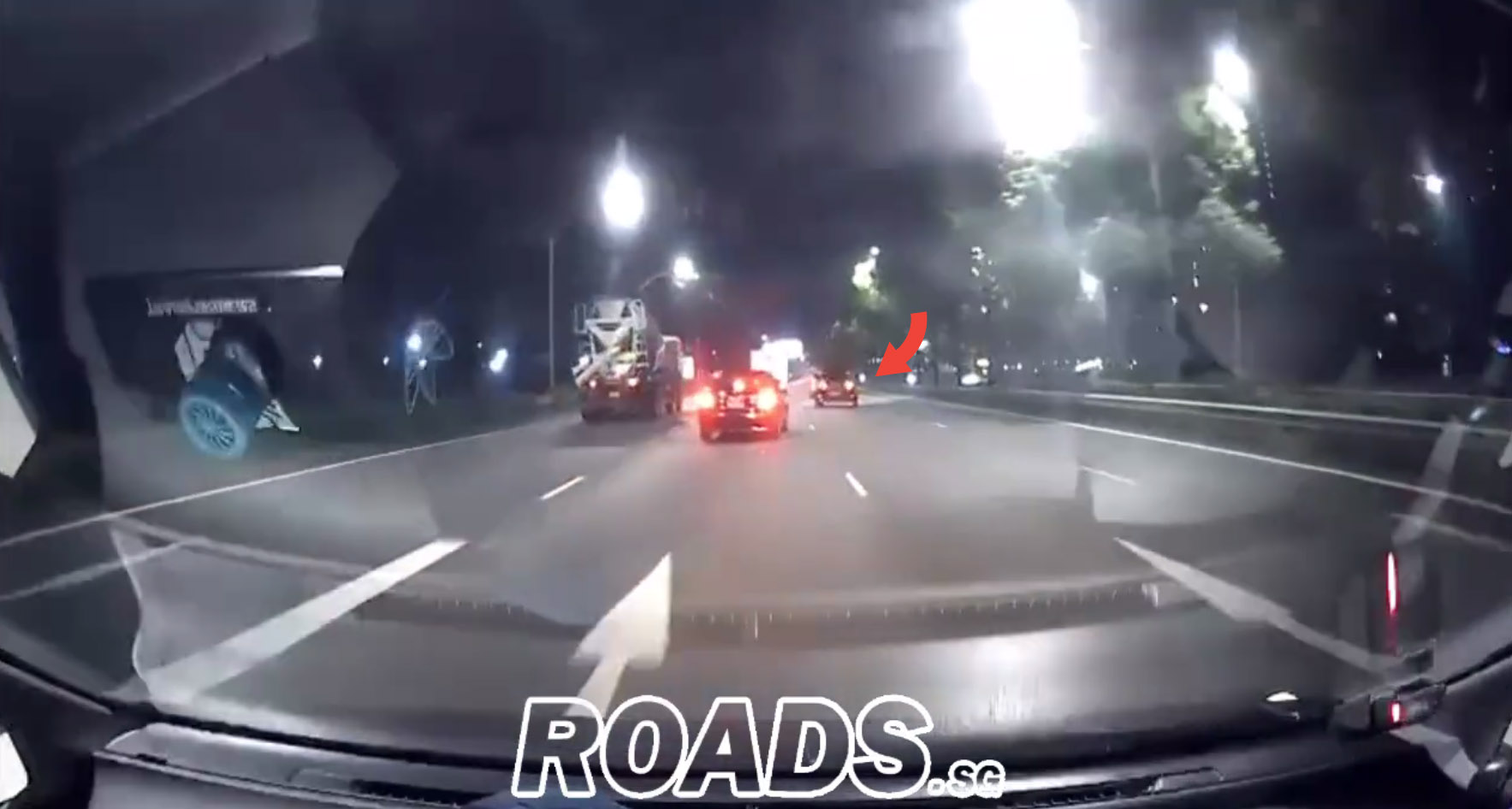 Meanwhile, perhaps stunned by what had happened, the driver of the sedan that was hit stopped in the third lane. 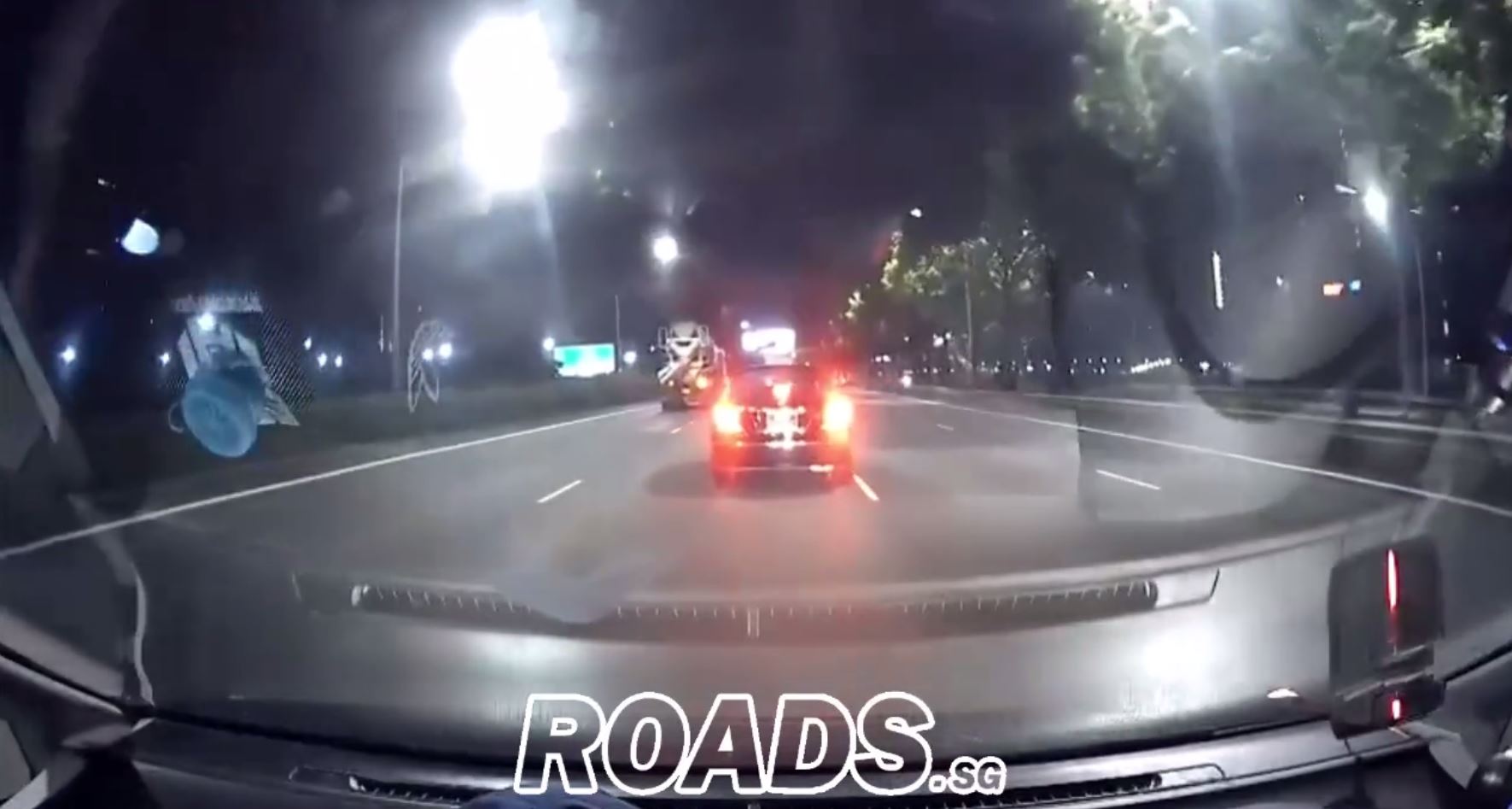 Thankfully, the vehicle behind him with the dashcam was able to stop a safe distance away.

Motorcycle hits uncle standing beside his car along the PIE

Later, the driver of the dashcam vehicle parked along the side of the road and approached the affected motorist, who seemed to be a middle-aged uncle.

Footage shows him speaking to the uncle, allegedly discussing matters pertaining to the dashcam video he had captured. 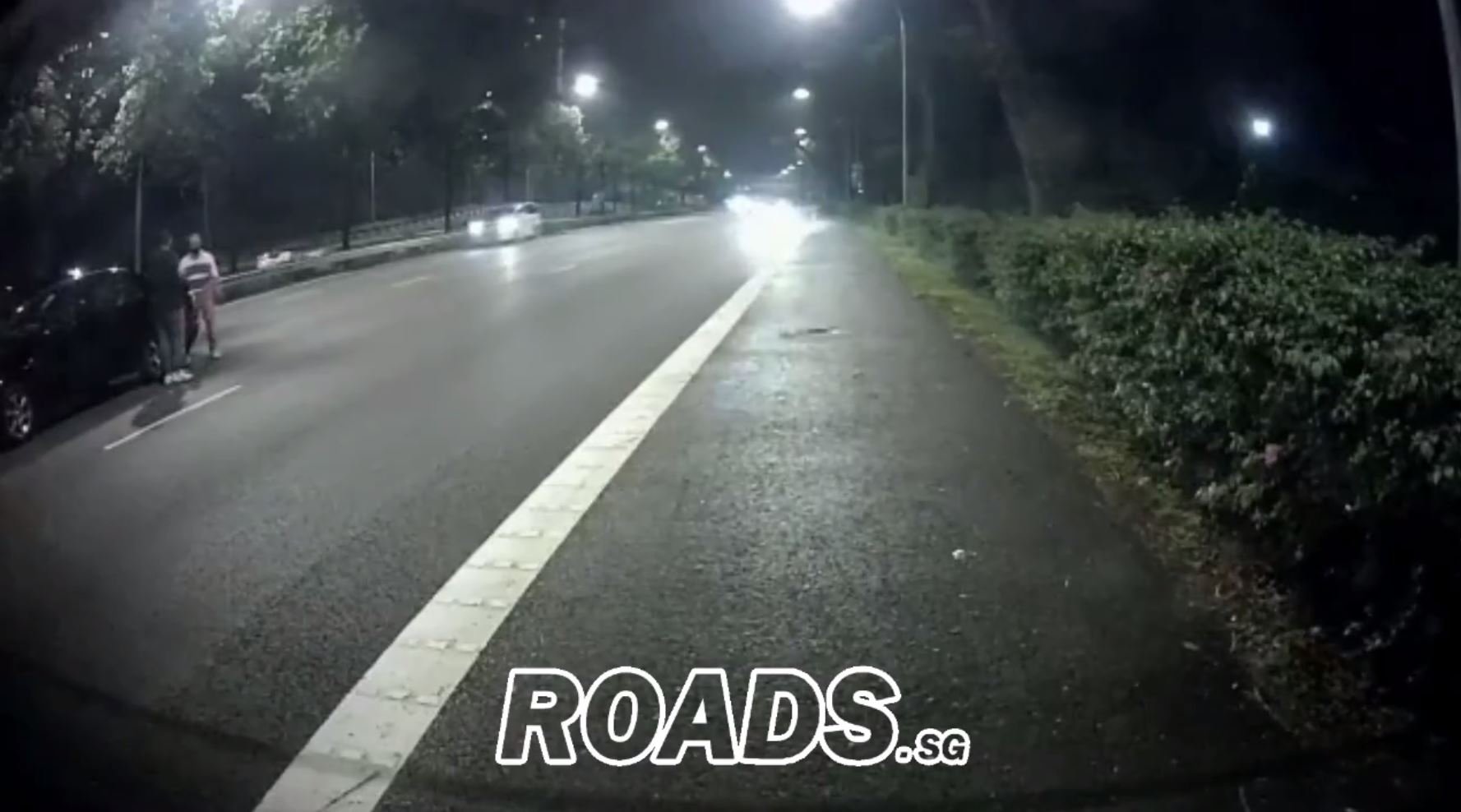 He also reportedly advised the uncle to move his vehicle to the road shoulder.

But just as he was signalling to other motorists to steer clear of them, a passing motorcyclist who seemed oblivious to the stationary car knocked into the uncle, who immediately fell to the ground.

This happened despite the uncle’s attempt to reposition himself closer to the car. The eyewitness, on the other hand, somehow managed to evade the bike.

Following the collision, the dashcam driver reportedly helped the uncle, who was hurt, to the road shoulder and called for help. 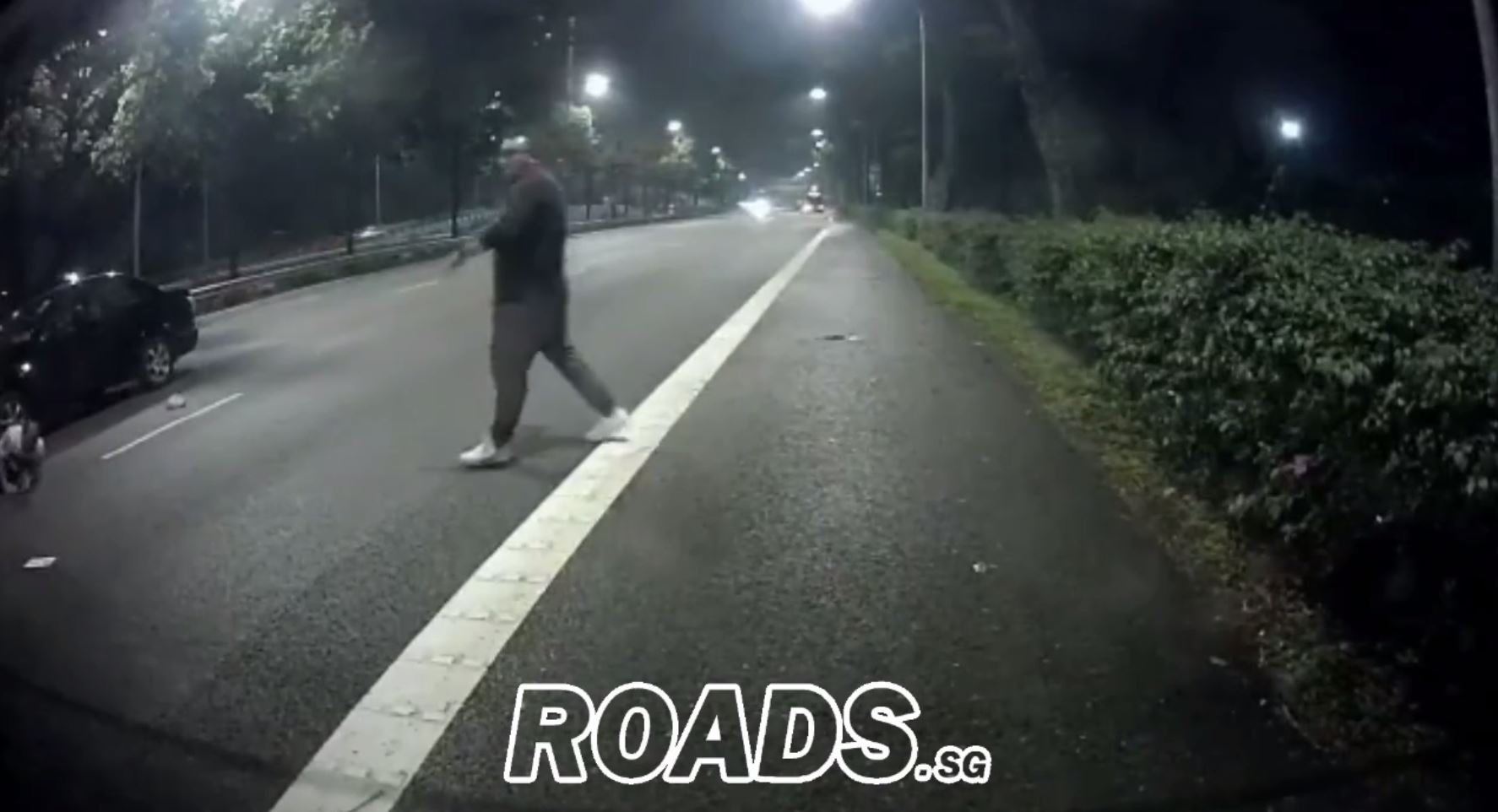 In response to queries from MS News, the SCDF confirmed that they were alerted to the accident at around 1.15am on 16 Apr.

A person was conveyed to the nearby Tan Tock Seng Hospital.

It pains to see the uncle getting struck by the motorcycle at such quick speed.

We hope he did not suffer any severe injuries and will make a smooth recovery.

This incident perhaps shows why it’s best to stop our vehicles on the road shoulder in the event of an accident, if possible.

But for other motorists too, make sure to watch your speed even on the expressway, and stay alert while driving or riding.