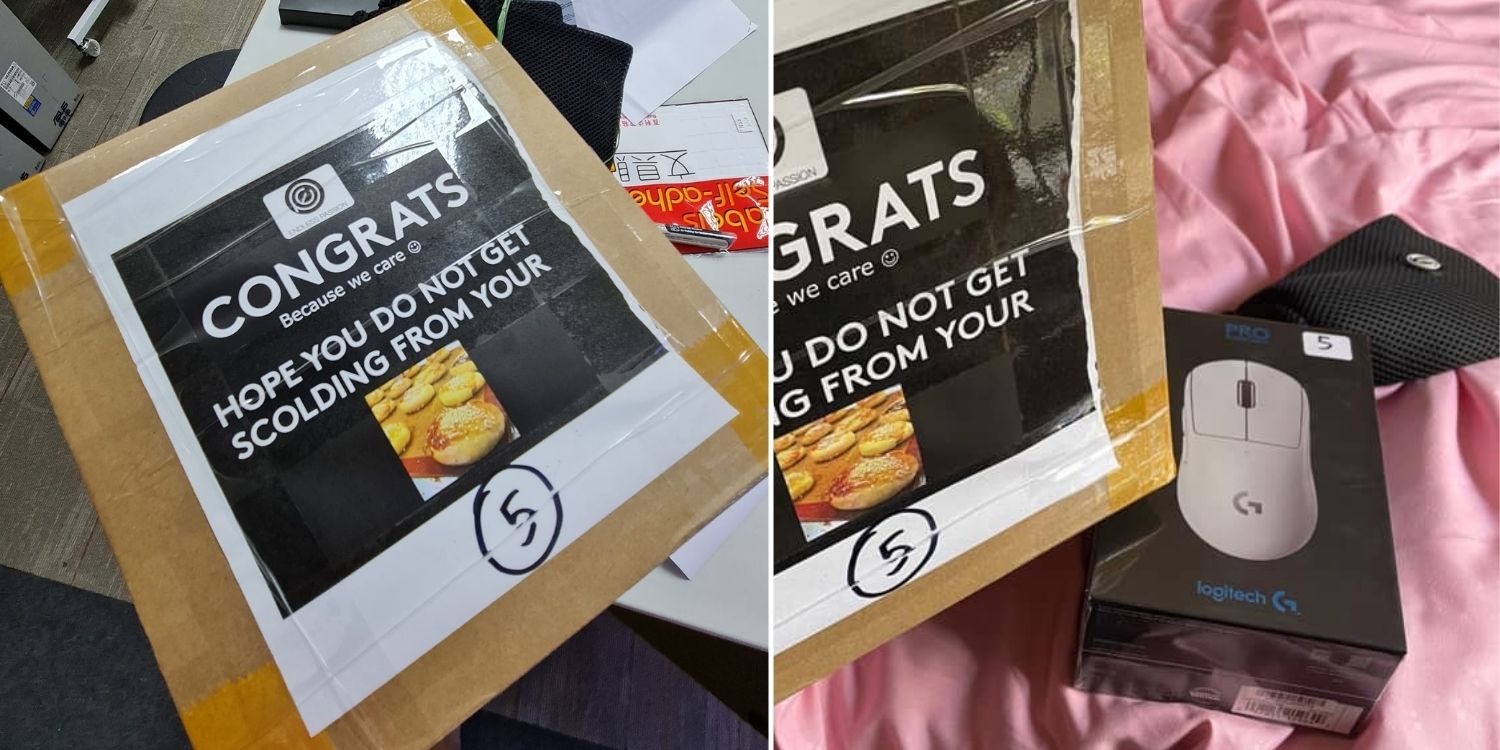 Correct instructions but with a twist.

Though ineffective in the long run, many of us resort to retail therapy to relieve our daily stress. Sadly, not all of our partners are accepting of our destressing methods.

In a bid to hide his gaming mouse purchase from his wife, a customer apparently requested for a Carousell user to label the product as a lucky draw prize.

Though the Carouseller accepted the request, the purchase was exposed as the packaging included a disclaimer that reads “Hope you do not get scolding from your”, followed by a picture of a lao po bings (wife biscuit).

Man wants Carouseller to disguise purchase to hide it from wife 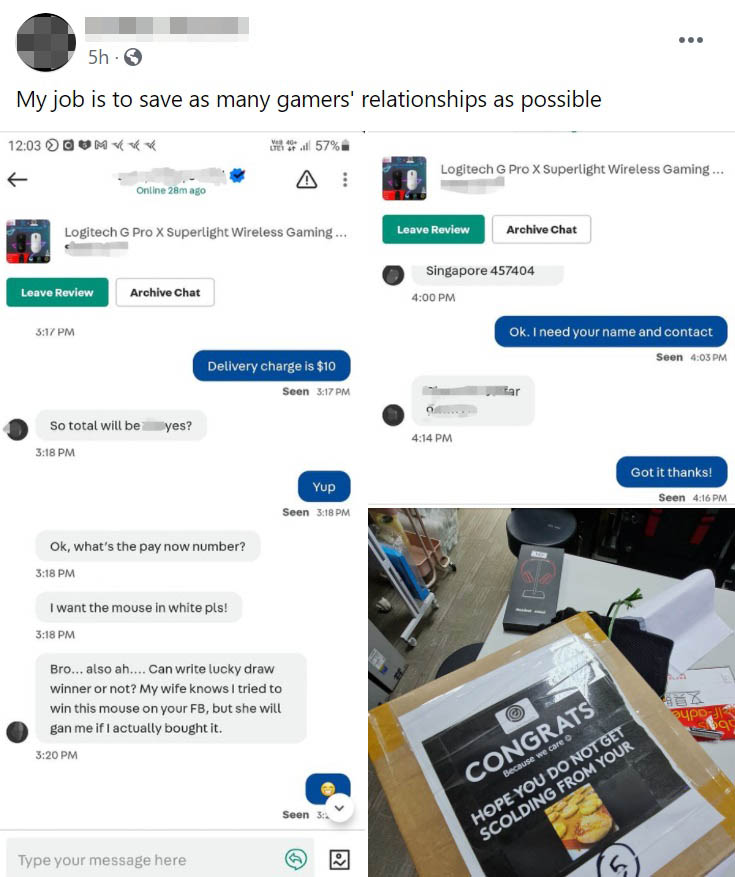 According to them, the customer had allegedly tried winning the gaming mouse through a giveaway on their Facebook page. Later, he decided to purchase the mouse after having no luck in the lucky draw.

However, the customer asked the Carouseller to label the purchase as a lucky draw prize as he was afraid that his latest pick-up would incur the wrath of his wife.

Upon seeing the request, the Carouseller replied with a mischievous smile emoji and proceeded to wrap the order up.

The next day, the man inquired about his delivery so that he could have ample time to put on an acting performance worthy of an Academy Award.

The Carouseller deviously replied that the man will receive a text from the courier beforehand. Little did the man know what was coming.

Carouseller’s clever play on words on the label exposes purchase

The package finally arrived and as requested, had a label that congratulated the man. 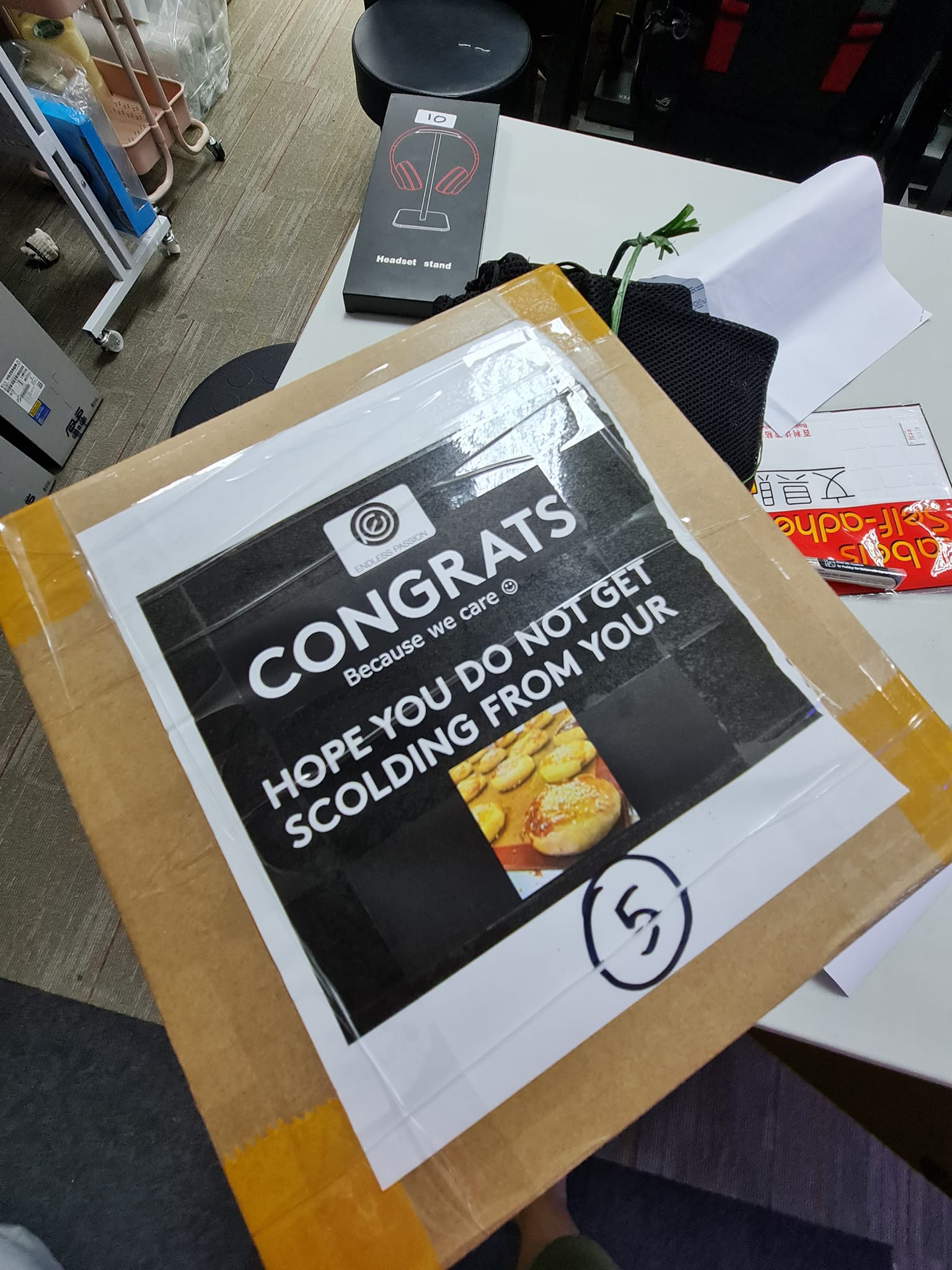 Little is known about the aftermath of the hilarious exposé, but after it was shared on Facebook, the customer gave an update on his situation. 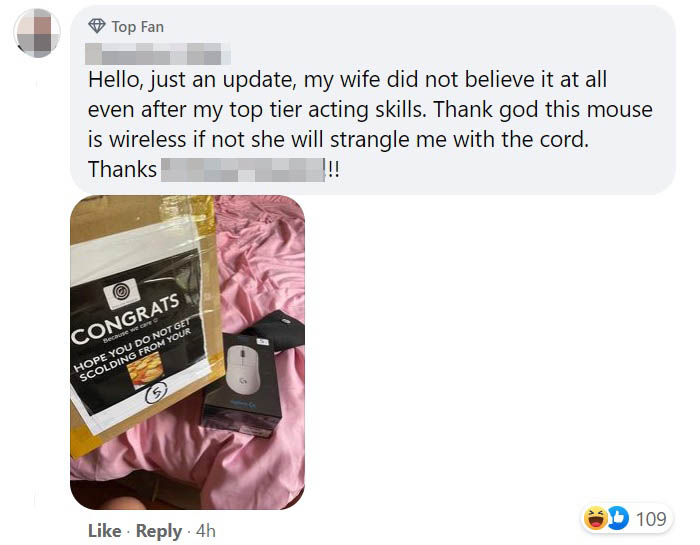 Apparently, the customer’s wife didn’t buy an ounce of the man’s acting performance but thanked the Carouseller for selling him a mouse without a cord that the woman can strangle him with.

For those who are unaware, this is the same shop that helped to disguise a customer’s mouse purchase as ‘books’.

Brilliant marketing move by the Carouseller

Brilliant marketing move or hilarious prank? Either way, we think that this is a stroke of genius on both ends. Kudos to the man too for being a good sport about it too.

If the comment section of the post is anything to go by, it seems the customer is happy and the Carouseller has found itself some new fans.

Have you ever had to disguise a purchase to hide it from wary eyes? What techniques did you employ? Let us know in the comments below.