Must Share News – Independent News For Singaporeans
Home News Blackout Hits CBD On Friday Afternoon, Forcing Some To Walk Down 28... 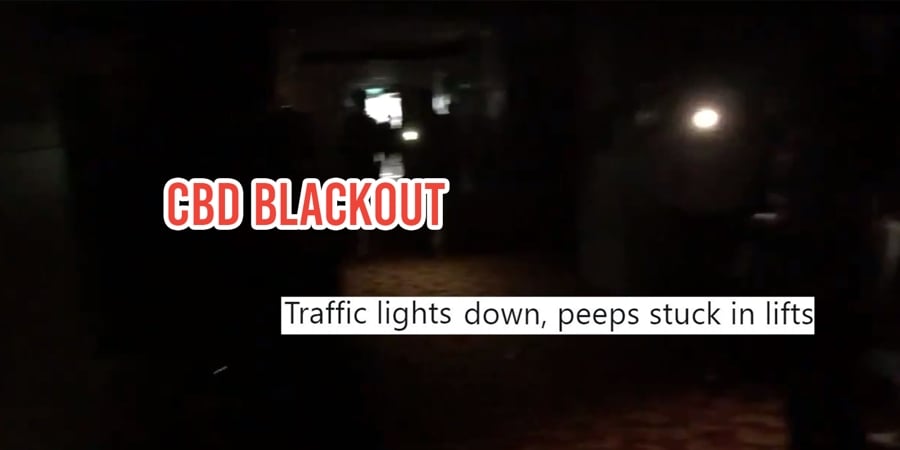 CBD Blackout Caused Someone To Walk Down 28 Floors Of Stairs

Anyone reading Friday’s (1 Jun) headlines might have thought it was Friday the 13th in Singapore.

First, there were the cracks that appeared on Lornie Road.

Then later that afternoon, parts of the Central Business District (CBD) were engulfed in darkness when a blackout hit the area.

It wasn’t just lights that were affected; lifts stopped working as well, forcing people to use the stairs instead.

And Traffic lights stopped working too, leaving drivers and pedestrians to navigate the roads themselves.

SP Group to the rescue!

SP Group published an update on the power outage on Facebook, saying the incident occurred along parts of Raffles Quay, Robinson Road and Shenton Way.

In total, approximately 3,156 of its customers were affected.

Thankfully, electricity supply was completely restored in 34 minutes, by 3.15pm.

The sudden darkness took office workers by surprise, and many used their phones as flashlights.

In true Singaporean fashion, the blackout did little to dampen our “work until die” attitude.

Blackout at Robinson Road. Traffic lights down, peeps stuck in lifts, I’ve no way to get back in the office. Wish I could do IA spreadsheets on an iPhone.

“Wish I could do IA spreadsheets on an iPhone.” Right in the feels.

This poor lady even had to walk down 28 floors of stairs to get to a meeting.

There was a blackout in my office building in CBD area, had to walk down 28 floors of stairs to get to my meeting! Also check out my sweet sweet blackout selfie lol pic.twitter.com/ot7CCg8Aux

Investigations into this unprecedented blackout are ongoing.

After all, SP Group once announced that the chances of a Singaporean experiencing a blackout is once in 169 years.

We just hope that our electricity isn’t another thing that’s going from first-world to third. (Ahem, MRT)