A woman shared a heartbreaking post about a chance encounter with an elderly lady at Clementi Food Centre on Thursday (22 Nov).

The experience left her with a “heavy heart”, and will probably change your outlook on how urgently some members of our pioneer generation require help with basic necessities.

Here’s her viral post – which has garnered over 4,000 shares – in full. We summarise it after the jump. 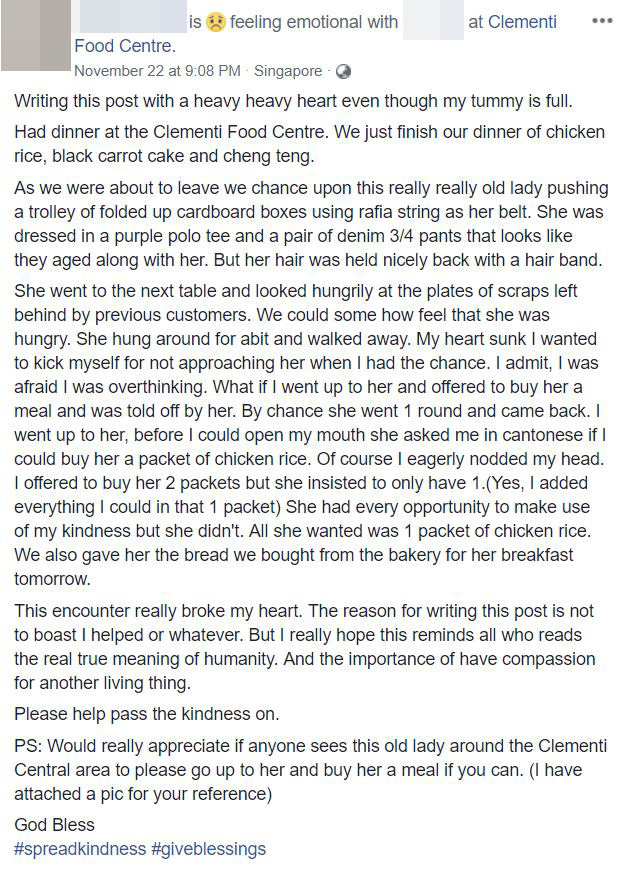 Using rafia string as her belt

The writer begins her poignant account by describing how she had a sumptuous meal of chicken rice, black carrot cake and cheng teng for dessert at Clementi Food Centre. Upon completing her meal with her companions, they noticed a “really really old lady” pushing a trolley of cardboard boxes, anchored to her body via a rafia string belt.

She was dressed in an aged purple polo tee and weathered 3/4 denim pants. However, despite her ‘shabby’ attire the elderly lady made an effort to tie her hair neatly in a ponytail with a hair band.

As the elderly lady trawled the table next to hers for plates of scraps, the writer’s heart sunk as she watched quietly from afar. The elderly lady left soon after.

I wanted to kick myself for not approaching her when I had the chance. I admit, I was afraid I was overthinking. What if I went up to her and offered to buy her a meal and was told off by her.

Thankfully, that wasn’t the end of the fateful encounter.

A single packet of chicken rice

After making her rounds, the elderly lady circled back to where the netizen was seated.

This time, she mustered the courage to go up to her. To her surprise, the elderly lady spoke first, asking in Cantonese if she could buy her a packet of chicken rice.

The netizen eagerly nodded her head and offered to get her two packets instead.

However, the elderly lady insisted on only one packet. As an added gesture, the netizen added everything she could into the packet.

She had every opportunity to make use of my kindness but she didn’t. All she wanted was 1 packet of chicken rice. We also gave her the bread we bought from the bakery for her breakfast tomorrow.

The netizen explained that she didn’t write the post to boast about her good deed.

She simply hoped that everyone who reads it remembers “the true meaning of humanity” and helps to “pass the kindness on”.

Most of all, she wished for everyone to understand the importance of having compassion our fellow human beings.

As we deal with our declining birth rate and ageing population, similar incidents may become more commonplace, unless we make an effort to change that.

Let’s all strive to give our communities a much-needed kindness boost, by doing our part to help others on a daily basis.

After all, time and tide wait for no man.