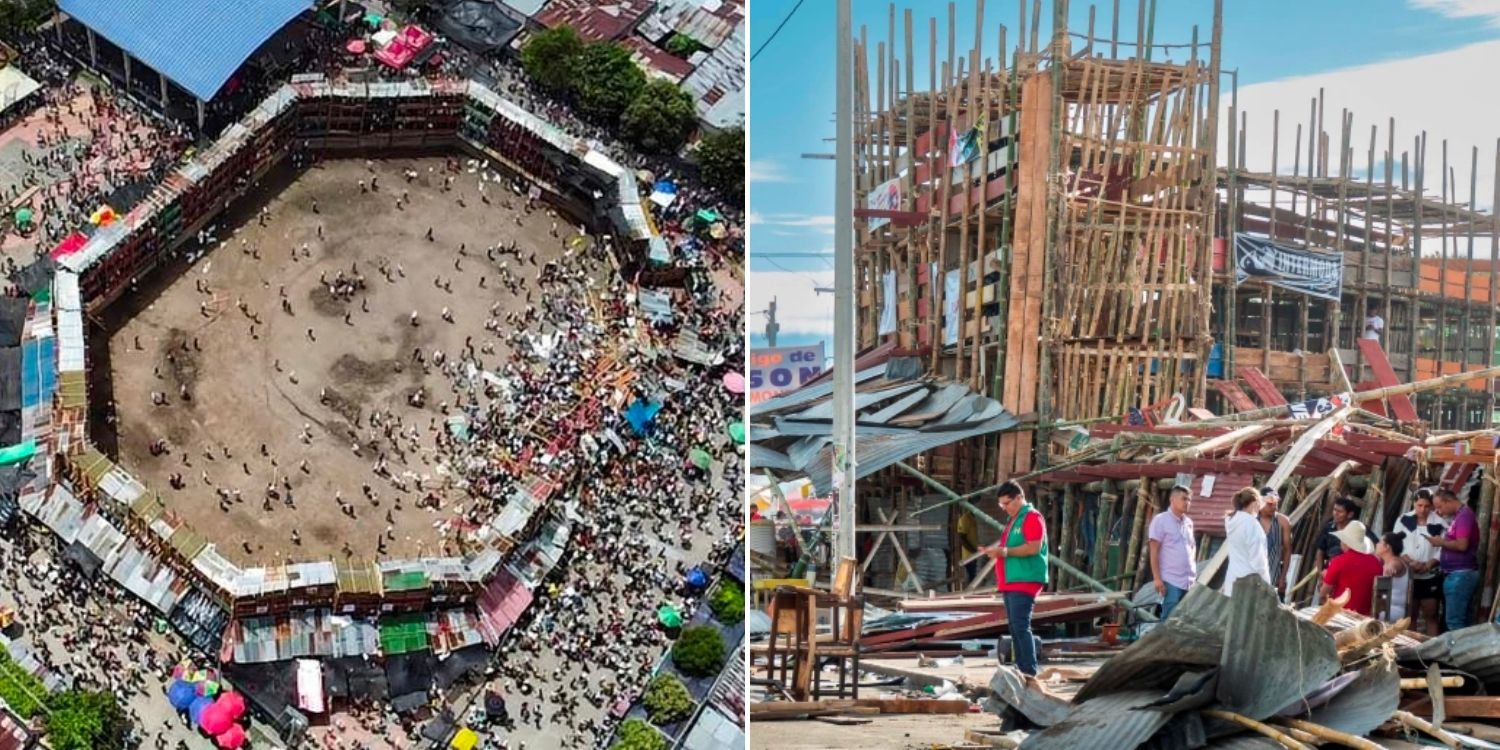 They had to ask for assistance from neighbouring medical facilities to cope with casualties.

Therefore, things can go south quickly if something gets out of hand.

On Sunday (26 Jun), spectator stands at a bullfighting event in Colombia collapsed, killing at least four people and injuring over 300 people.

The event was part of the San Pedro festival.

A video of the incident shared on social media showed the stands, made of wood and bamboo, toppling over the ring where a bull-running event was taking place.

According to The Guardian, the bullfighting event was part of a cultural festival honouring Saints Peter and Paul, who were apostles of Jesus Christ and Christian martyrs.

In the event, members of the public would face off against small bulls.

However, at an event in Espinal, Tolima on 26 Jun, a section of the spectator stands collapsed suddenly and threw dozens of people to the ground.

As a three-storey section of wooden stands filled with spectators fell down, the crowds fled from it. About 800 spectators had been seated in the collapsed sections.

To make matters worse, the bull reportedly escaped and caused panic on the city’s streets.

Daily Mail reported that local civil defence official Luis Fernando Velez said they did not know how many people were buried under the rubble. However, he noted that that section of stands was fully occupied when it collapsed.

At least four people have passed away from this incident. These include an 18-month-old baby, as well as two women and a man, according to Channel NewsAsia (CNA).

In addition, Tolima health security Martha Palacios said of the 322 people injured, four were in intensive care. Two were also recovering from surgery.

According to The Guardian, the local hospital was overrun by the sheer number of casualties, and they had to ask for assistance from neighbouring hospitals and ambulances.

A city council member, Ivan Ferney Rojas, said some have yet to get treatment.

There are conflicting reports regarding the rescue of those trapped. Contrary to Daily Mail, The Guardian reported no one remained trapped in the wreckage, citing Maj Luis Fernando Velez, director of civil defence in the province.

Some people who were missing had also been found.

Colombian newspaper El Tiempo said the cause of the collapse is unknown, and outgoing President Ivan Duque has called for an investigation into the matter.

Bullfighting in Colombia is controversial

Daily Mail pointed out that President-Elect Gustavo Petro, who will take office on 7 Aug, rallied for bullfights to be banned.

It was not the first time lives had been lost in a bullfighting-related incident.

Another person had died earlier in June after being gored in Repelon during a corraleja, where residents would have a go in the ring.

Petro, formerly the mayor of Bogota, had managed to stop such events in La Santamaria, the city’s signature bullring. Even though animal abuse is illegal in Colombia, bullfights and cock fights are protected because of their cultural history and significance.

Hope those injured in bullfighting incident will recover

It’s distressing to see such a tragedy occur on a day of celebration for the Colombians.

More can be done to protect the residents from such events if they cannot be entirely banned.

MS News extends our condolences to the loved ones of the deceased. May they rest in peace.

Hopefully, swift medical attention will be given to all in need, and casualties will recover from their injuries smoothly.