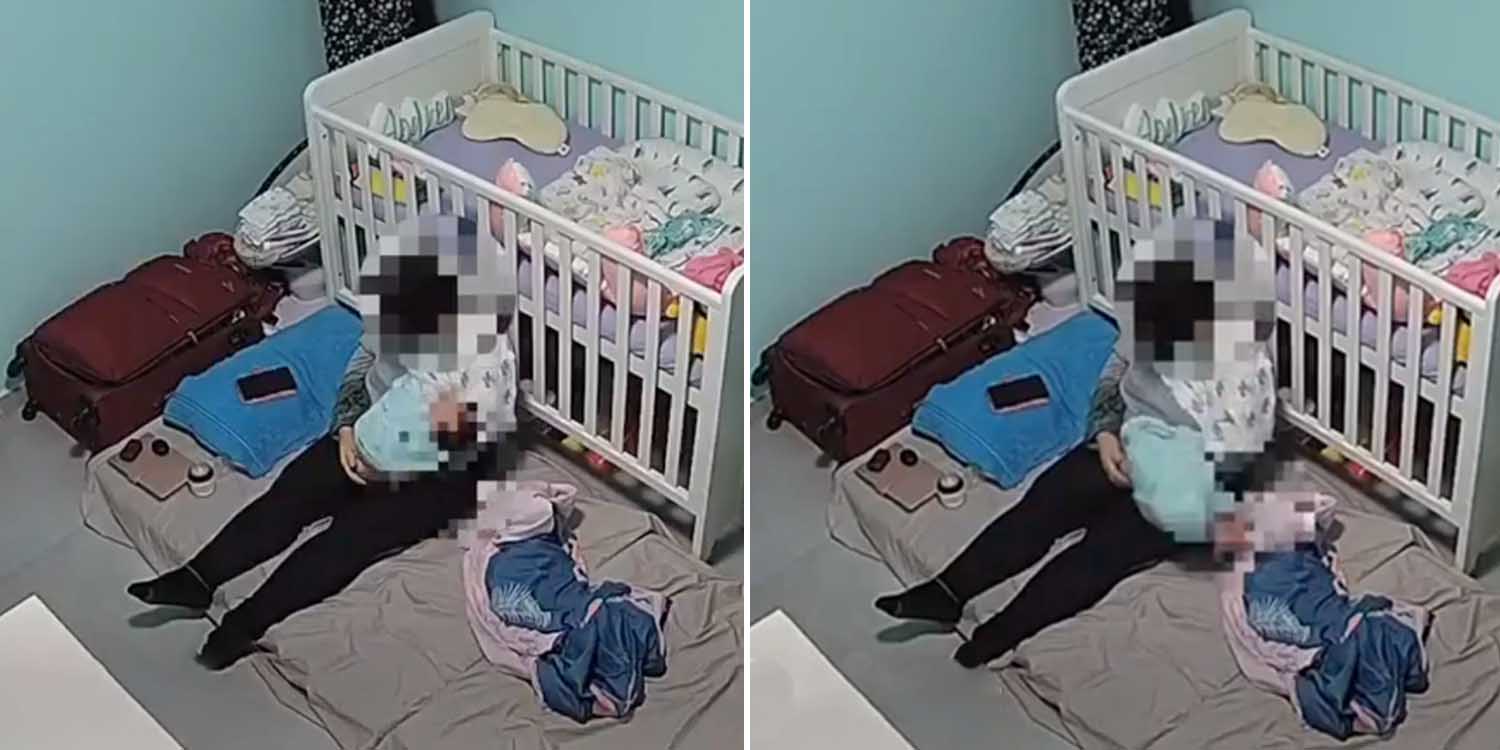 She was seen dropping the baby and pulling her by the calves.

While it might be hard for parents to part with their newborns a few weeks after their birth, they often have to return to work, entrusting their little ones with nannies or childcare centres.

Even so, parents will forever be worried about their ‘lil ones and will often check in on their precious babies.

Recently, when Mr and Mrs See checked the CCTV footage of their Hougang flat, they found that their 1-month-old daughter was being treated roughly by their nanny.

Footage showed the nanny dropping the baby on her head, pulling her by her calves, and patting her excessively hard on the back.

After seeing the horrific footage, 33-year-old Mr See lodged a police report against the nanny, who is now under police investigation.

When first-time parents Mr and Mrs See were looking for a confinement nanny, a friend recommended them Mdm Yang.

63-year-old Mdm Yang apparently has 19 years of experience and had never received a complaint.

Knowing how difficult it can be to get a confinement nanny during the pandemic, they paid a deposit for Mdm Yang back in Jun 2021, even before their baby was born.

According to Shin Min Daily News, since their daughter was born on 27 Dec, Mdm Yang had been staying in the same room with her. The family’s helper also stayed in the same room.

On 17 Jan, Mrs See was reviewing the room’s CCTV footage when she noticed Mdm Yang patting her 1-month-old baby excessively hard on her back.

The parents subsequently had a discussion but decided to give Mdm Yang another chance.

However, Mr See later went to check the CCTV footage of the past few days.

He was livid to find that there were many more instances when Mdm Yang was rough with their 1-month-old daughter.

Besides patting the baby hard when burping her, the footage also showed Mdm Yang falling asleep when holding the baby. She then dropped the young child on her head.

Thankfully, she was sitting on a mattress at the time, which cushion the baby’s fall.

In another clip, Mdm Yang was seen grabbing onto the baby’s small calves and pulling the baby towards her.

She never expected that she would treat the baby this way when left alone.

Confronted with the sobering reality, the parents made a police report on 22 Jan.

The police came to their Hougang flat to take their statements. Mdm Yang subsequently left the flat with the men in blue.

Even as she was leaving the flat, Mdm Yang insisted that Mr and Mrs See were making false accusations.

However, the nanny admitted that she was rough with the child.

When interviewed by Shin Min Daily News, Mdm Yang said she had no intention of abusing the 1-month-old girl. She also denied pinching and hitting the child.

According to The New Paper, the police received the call that a 1-month-old baby was abused at about 2.45pm on 22 Jan.

In the meantime, her Malaysian’s passport has been impounded.

Hope police can ensure such incidents will not repeat itself

In parents’ eyes, there is nothing more precious than their child.

It is understandable that Mr and Mrs See were alarmed to see the way their baby was treated.

Hopefully, police investigations will get to the bottom of the matter and ensure that such incidents will not happen in the future.