Some DBS Customers Affected By Outage On 25 Nov

Over the past 2 days, some DBS customers have had difficulties accessing online banking services as they couldn’t carry out transactions.

However, it seems some are still reportedly unable to access the bank’s services as of Thursday (25 Nov) — the 3rd day straight. Yesterday evening (24 Nov), DBS Singapore country head took to Facebook to apologise for the outage and assured customers that their deposits were safe.

Since the outage started on Tuesday (23 Nov), DBS has been trying to resolve the technical issue. The first interruption was reportedly resolved at 2am the next day.

However, the second outage quickly occurred a few hours after that.

However, several customers again shared their difficulties accessing the banking services in the comments section on Thursday (25 Nov) morning. 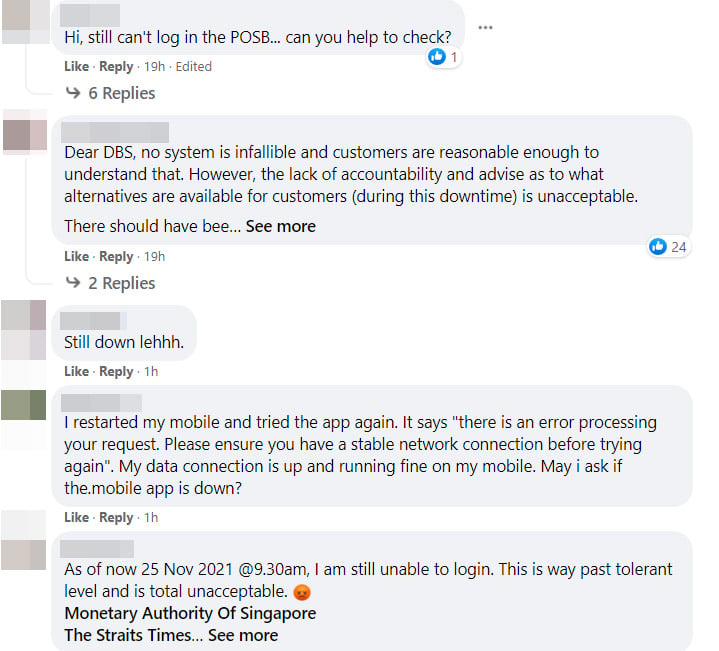 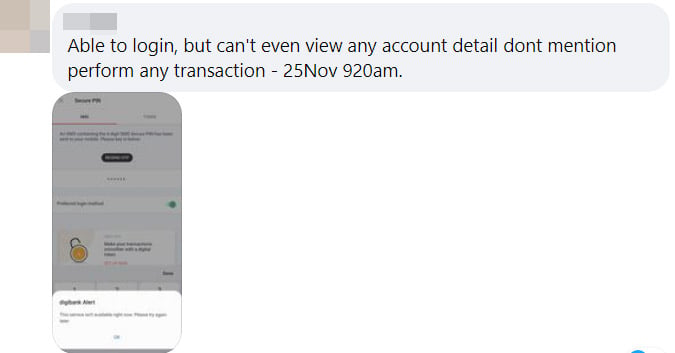 This netizen faced a similar problem and could not view his credit card transactions.

DBS informed customers that digital services are “returning to normal” in response to some of these complaints. The bank also urged users to restart their devices and try logging in again.

According to The Straits Times, the Monetary Authority of Singapore (MAS) said it might take “supervisory action”.

Assistant managing director of banking and insurance, Marcus Lim, said this is a “serious disruption”, and DBS is expected to run a thorough investigation to identify and fix the root causes.

He said everything started when the bank found problems with its access control servers on Tuesday (23 Nov).

Since then, DBS staff and 3rd-party engineers have been working round the clock to resolve the issue.

Though the services were restored at around 2am on Wednesday (24 Nov), the same problem resurfaced later in the morning.

Aware of how severe the outage is, Mr Shee apologised for the inconvenience caused. He also assured customers that their money and deposits remained safe.

Customers can also continue with their banking needs through DBS branches or via phone banking.

Hope issue will be resolved soon

Though the situation seems to be improving, it’s unfortunate that the disruptions are still happening for the 3rd day straight.

We hope the issues will be resolved soon so customers have peace of mind and can go about their usual banking routine.