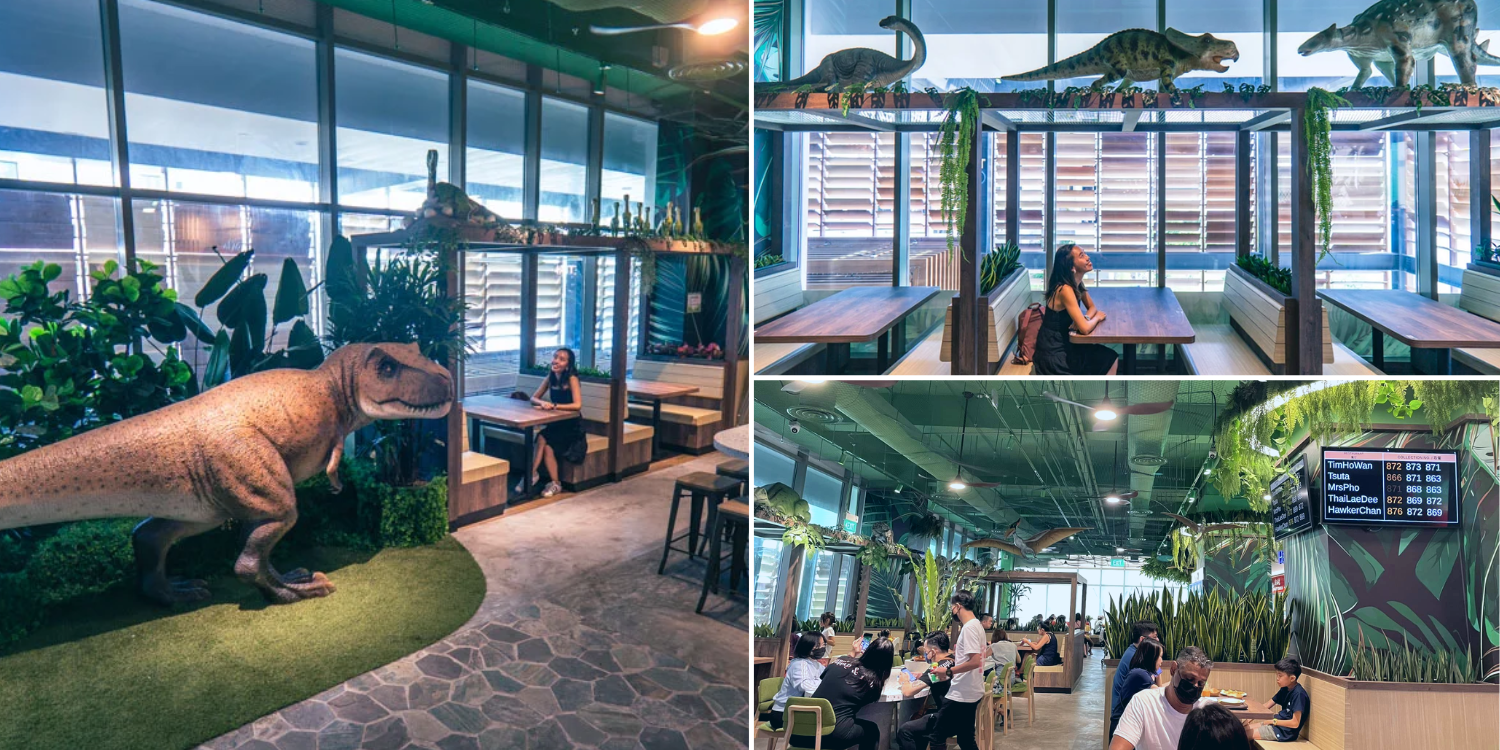 Although dinosaurs went extinct millions of years ago, they continue to fascinate us to this day.

From movie franchises to themed attractions, we’ve come up with various ways to keep their memories alive.

For dinosaur lovers in Singapore, this new food court in Punggol might just become your next go-to dining spot. 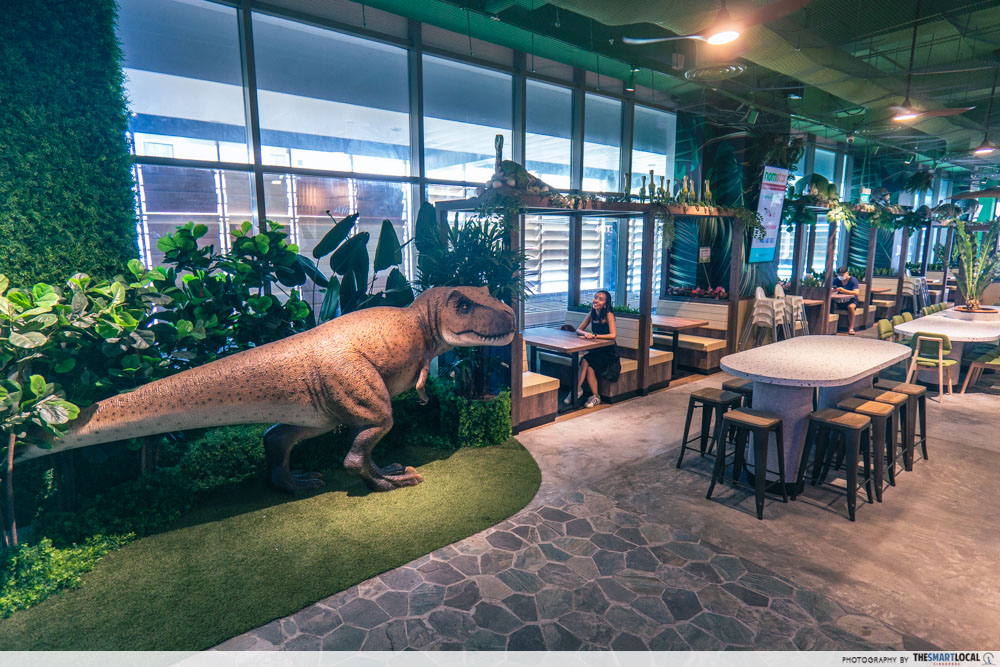 With lifelike dinosaurs everywhere, five popular Asian restaurants under one roof, and a view overlooking the sea, it’s far from your average food court.

Nomstar, the food court, is located at Northshore Plaza II, a shopping mall in Punggol that opened earlier this year.

With a jungle-themed interior featuring leaf-painted walls and faux ferns, the food court looks more like a jungle safari than an eatery at first glance. 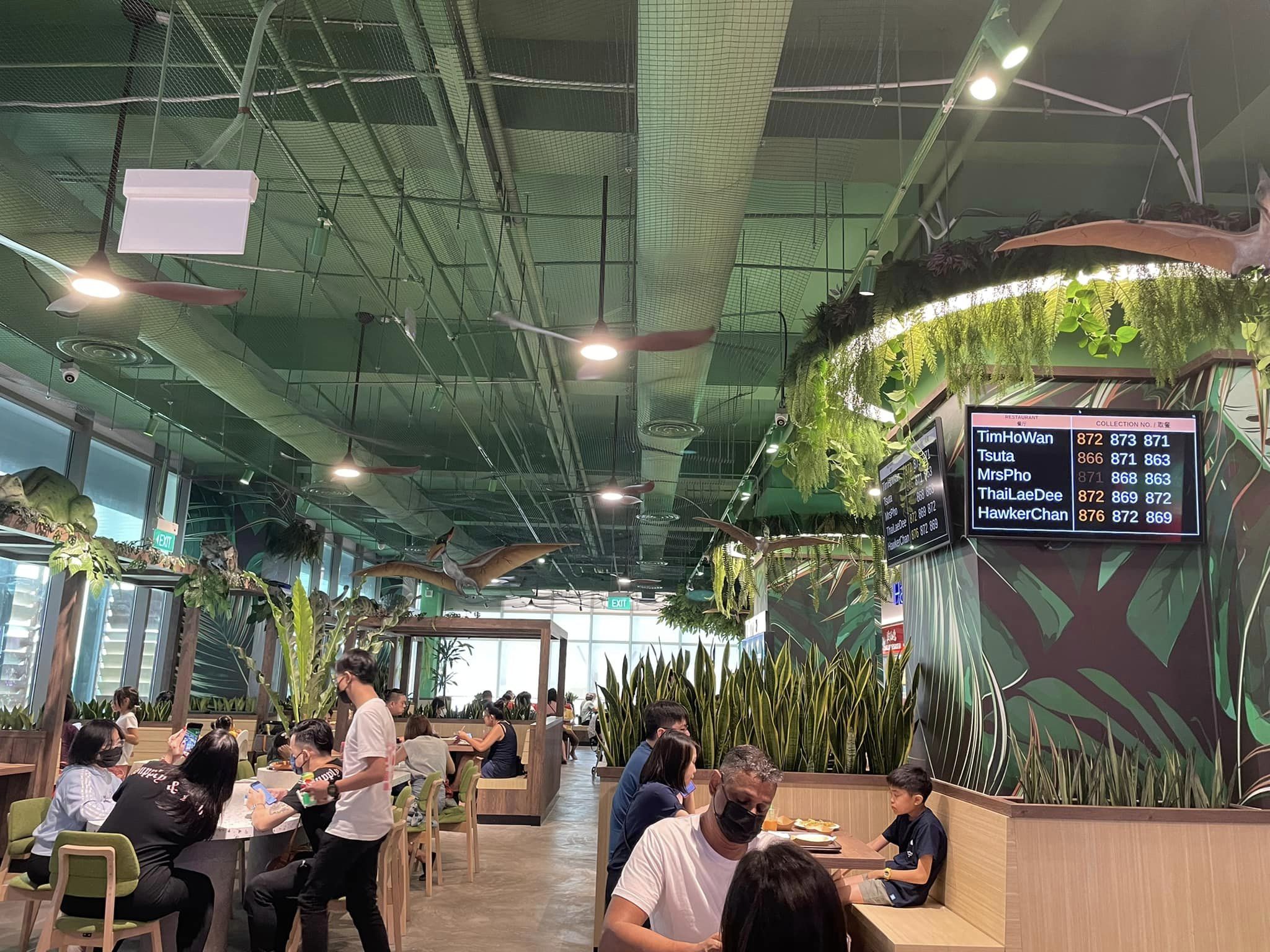 Depending on which corner you dine at, you can grab lunch alongside a T-Rex, pterodactyl, or brontosaurus, just to name a few.

If you sit at one of the tables with opposite-facing seats, chances are you’ll be able to see a dinosaur ‘crawling’ across the nets above you. With a myriad of species on display, dinosaur enthusiasts should have a fun time spotting and naming these Jurassic-era creatures.

While some food courts lean towards street food, Nomstar offers something different by having five well-known restaurant chains under one roof.

Furthermore, each stall has its own type of Asian cuisine to cater to various tastebuds. First off, there is Hawker Chan, known for its Hong Kong Soya Sauce Chicken Rice & Noodle.

Next up, we have Tsuta, which originated in Japan as the world’s first Michelin-starred ramen eatery.

While its founder sadly passed away this September, you can still honour his memory by savouring a bowl of Tonkotsu Soba.

For Vietnamese foodies, you can get an authentic bowl of Sliced Beef Pho from Mrs Pho.

Spicy food lovers can look for Thai Lae Dee, a 24-hour restaurant chain from Bangkok with offerings like Tom Yum Seafood with Rice and Minced Chicken with Chilli & Basil Leaves. Last but not least, there’s something in store for dim sum lovers too with Tim Ho Wan, where you can get crowd favourites like the Baked BBQ Pork Buns or Hong Kong Style Egg Tarts.

Diners can eat while taking in views of Punggol waterfront

Dinosaurs and award-winning Asian cuisine aside, Nomstar also has sea-facing views for an elevated dining experience.

As such, diners can take in both their meals and unobstructed views of the sea at the same time. For an even better view, head to level 2 for the designated lookout point, where shoppers can spot the Punggol-Timor island and even JB.

A dino-mite destination for foodies

Food courts are a dime a dozen in Singapore, so it’s a breath of fresh air to see one with a unique take.

Add to that some scenic views and a good selection of Asian cuisine, and you have all the boxes checked for a dino-mite weekend eatery.

Will you be paying this food court a visit? Let us know in the comments.