When the Changi Jurassic Mile opened last year, Singaporean families flocked to the new attraction to gaze at the imposing dinosaur displays. 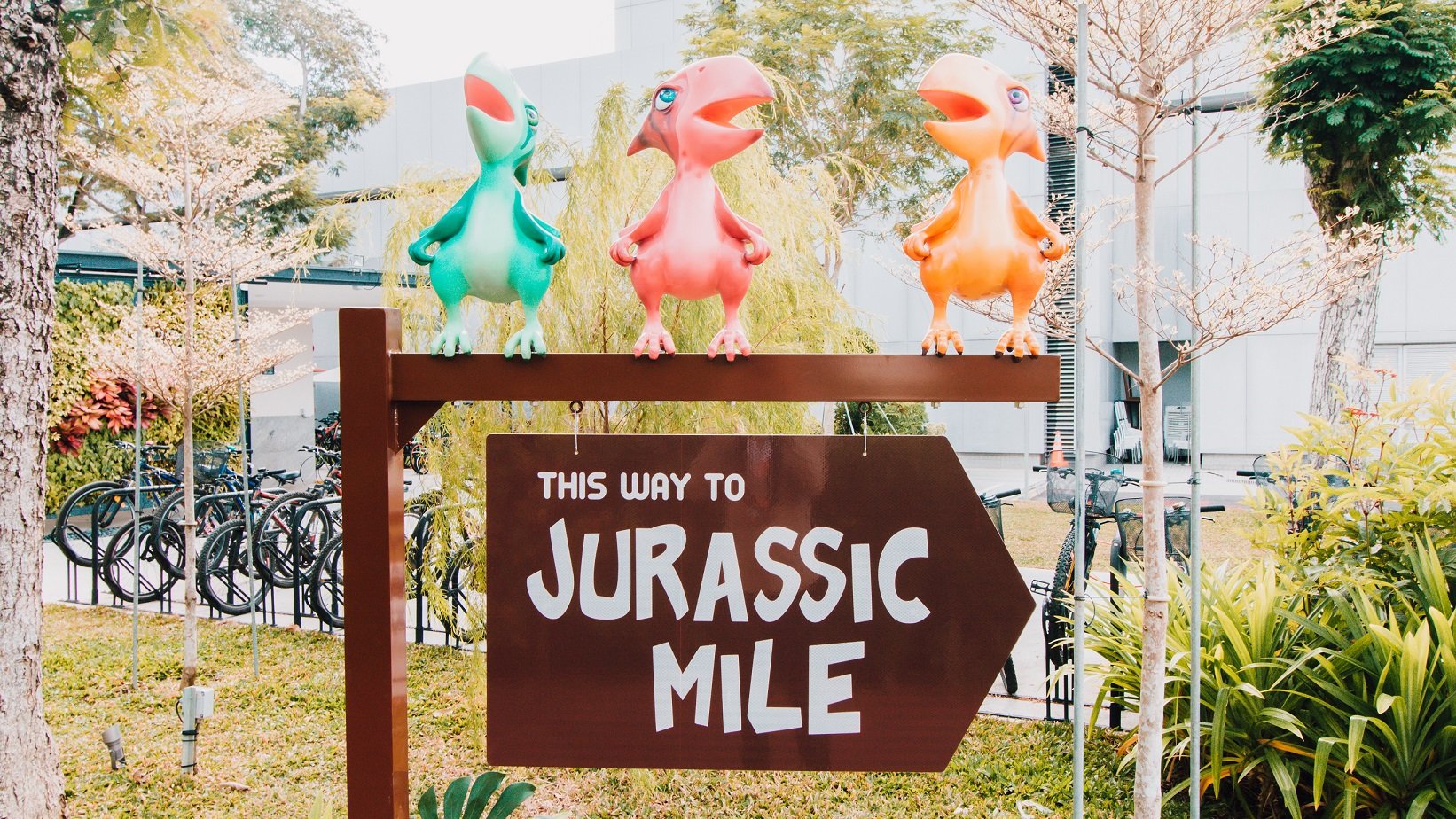 Families who’ve already run out of activities to occupy the children with can now head to Changi to try to spot the new dinosaurs.

With 11 new dinosaurs added, dinosaur-hunting can now be a fun activity for the family during the ongoing holidays. The Diplodocus outside the VIP complex. Photo courtesy of Changi Airport Group.

The dinosaurs that have been newly installed at various locations along the 3.5km park connector are:

Finding all of them, and of course snapping photos for the ‘gram, should be an interesting challenge for little ones. 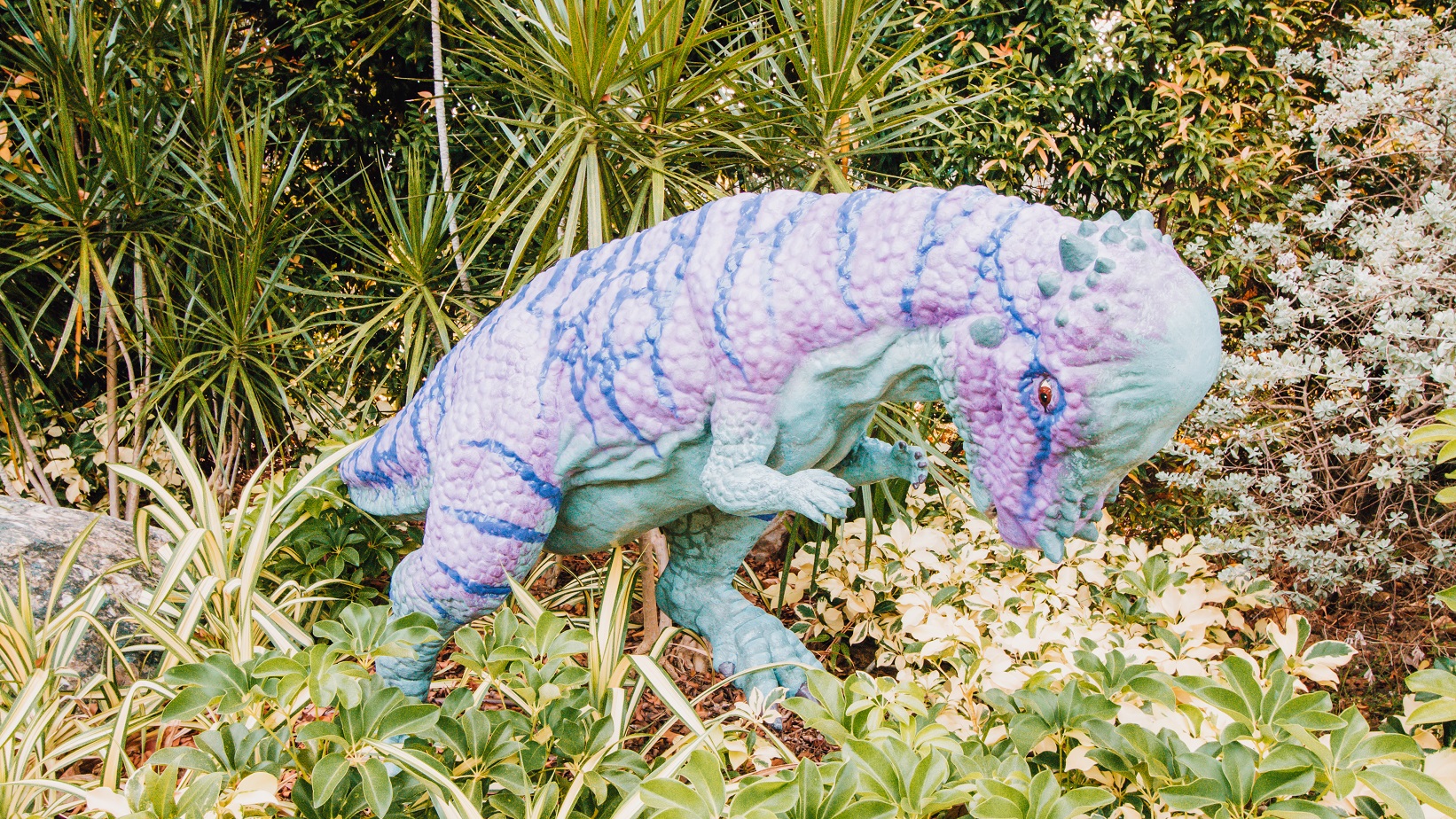 T-Rex can be seen from ECP

Among the new displays is the T-Rex, which won’t be too difficult to spot – it can be seen from the East Coast Parkway (ECP). 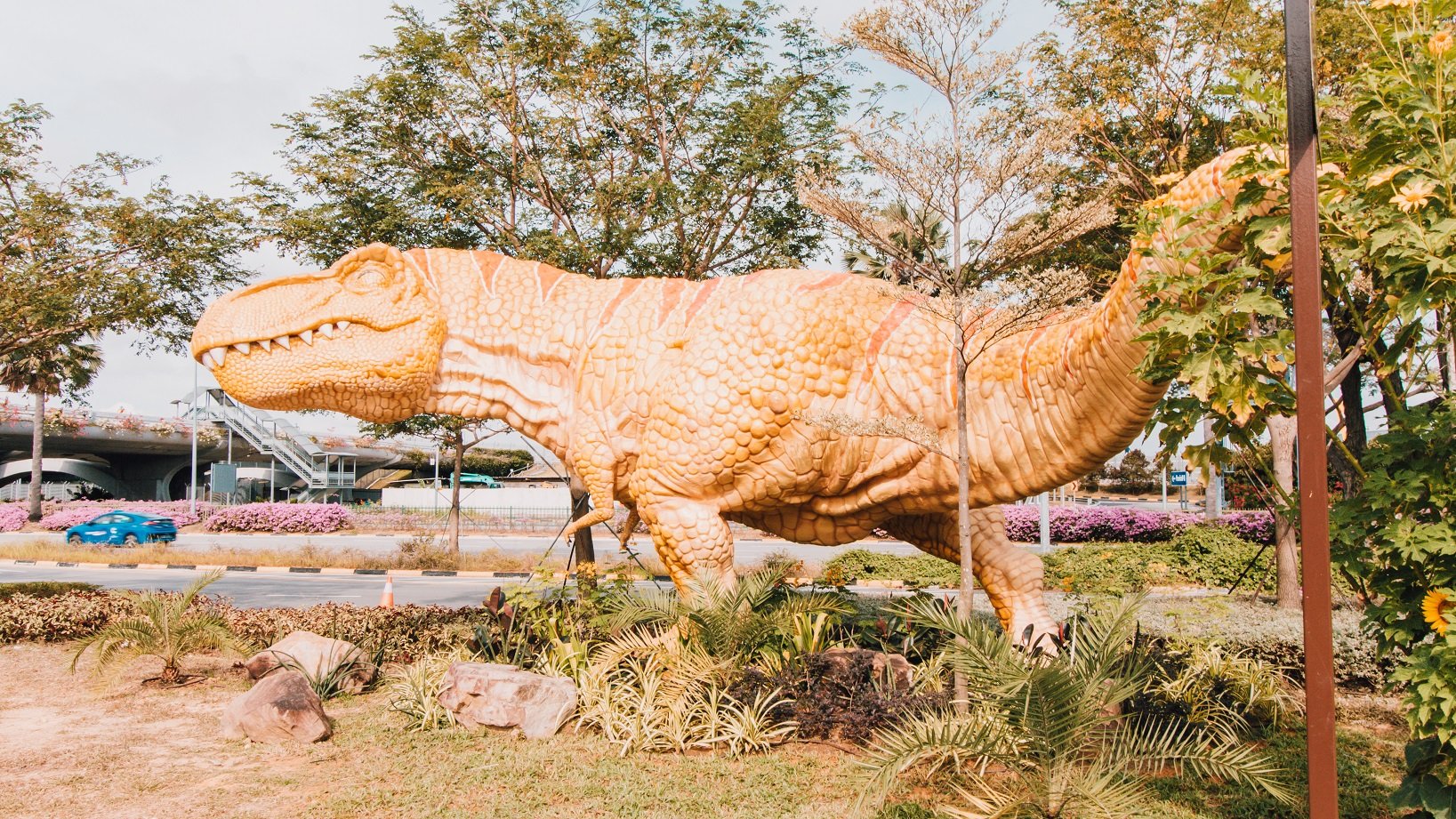 The 3.9m-tall yellow dino waits for visitors just next to the slip road near the Terminal 4.

The 1.2m-tall baby raptor, on the other hand, is located just around the corner from the starting point of the Jurassic Mile near HUB & SPOKE cafe. 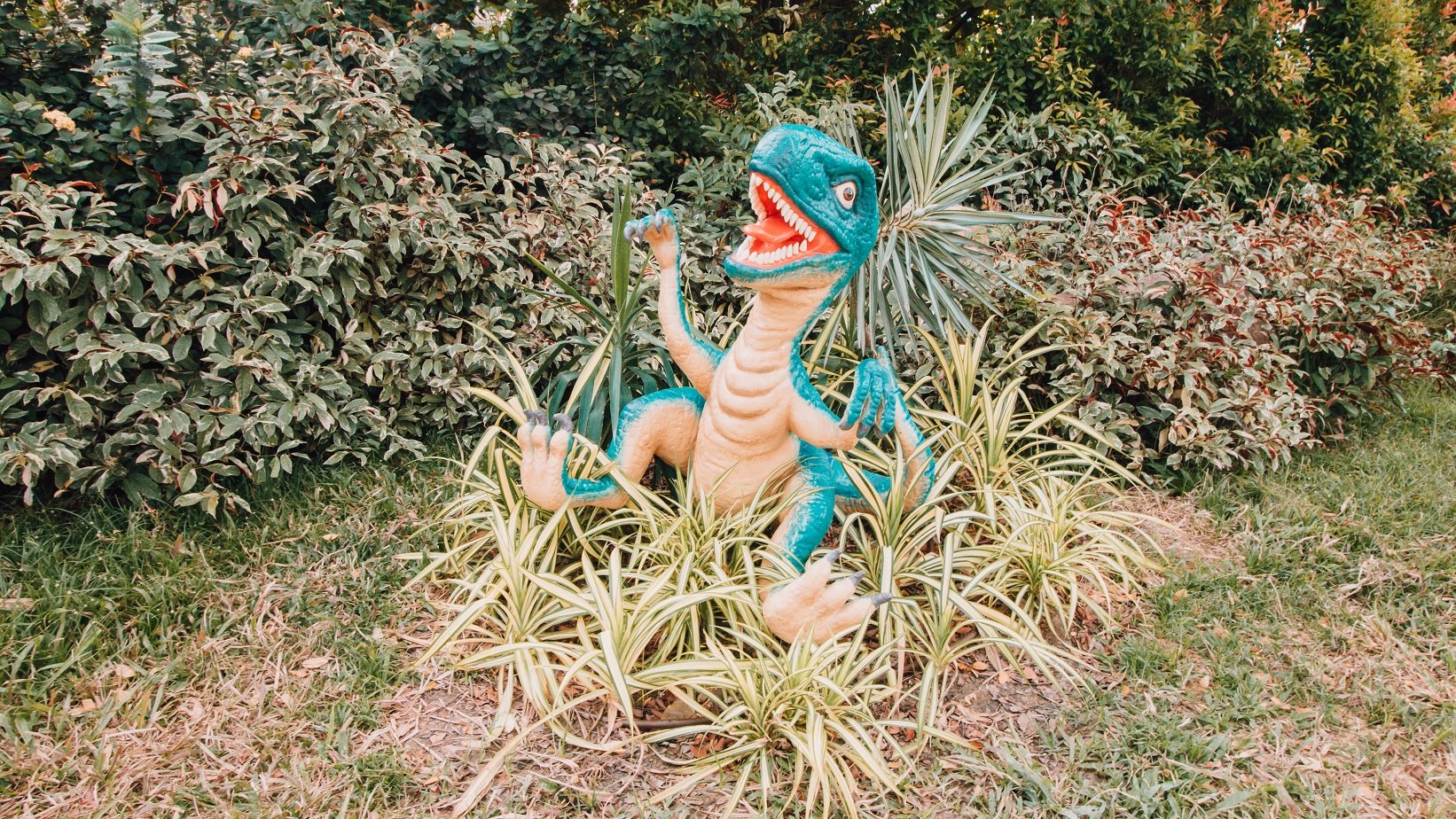 CAG said the locations were chosen for their lush greenery, so the new dinosaurs can blend more naturally into the surroundings.

Those who visited Changi Airport over Christmas may find the dinosaurs familiar.

They were the stars of the Changi Festive Village event that took place at the end of 2020. 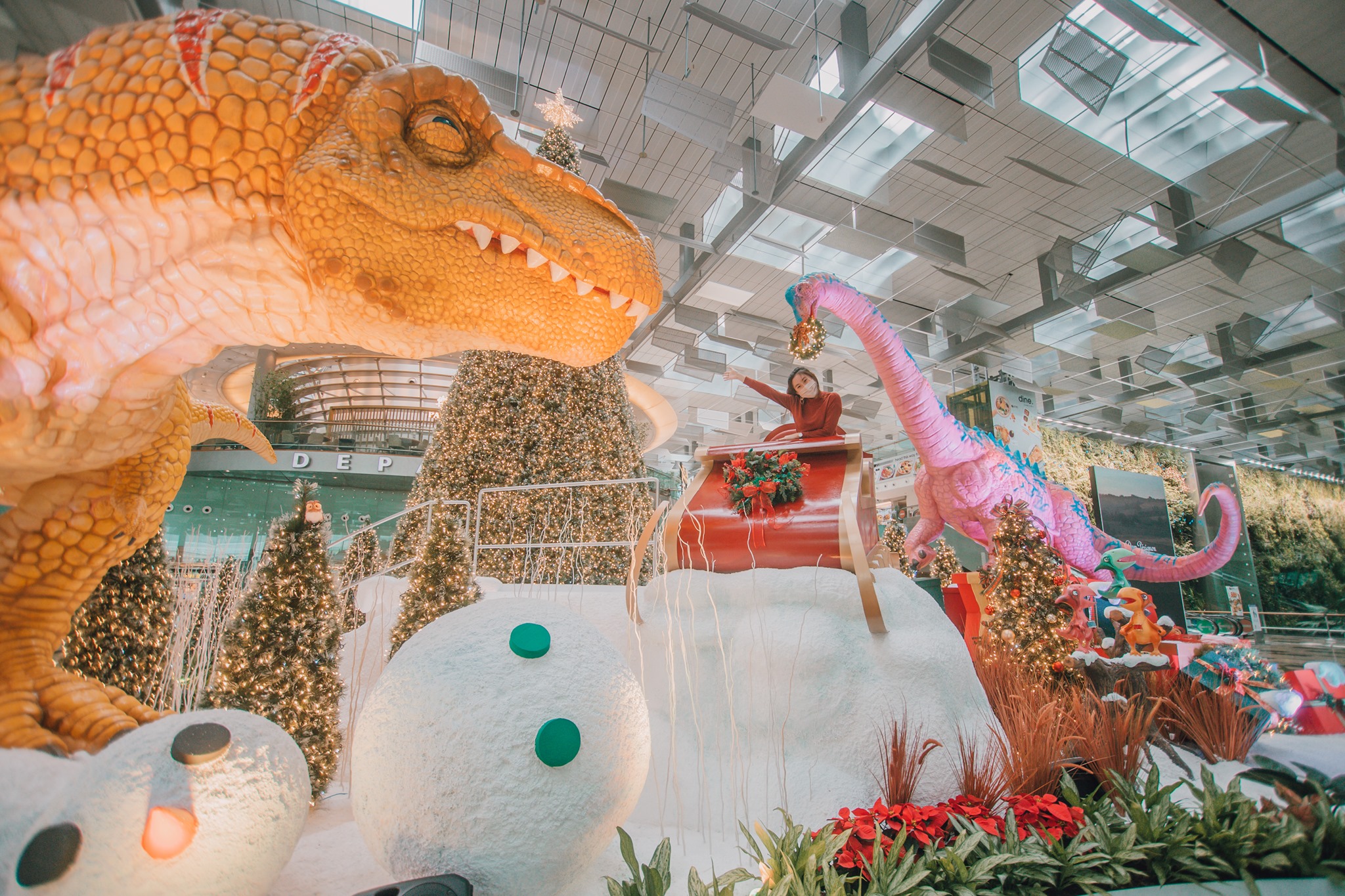 Instead of letting them go to waste, CAG decided to give them new life in the Connector and Jurassic Mile.

Their former lives as Christmas attractions explains why the dinos are more brightly coloured than their older counterparts at the Jurassic Mile.

Relocation of 2 big dinos was ‘no mean feat’

Seeing the dinosaurs nestling comfortably in their new habitats, one wouldn’t know the massive effort it took to move them from the T3 Departure Hall. 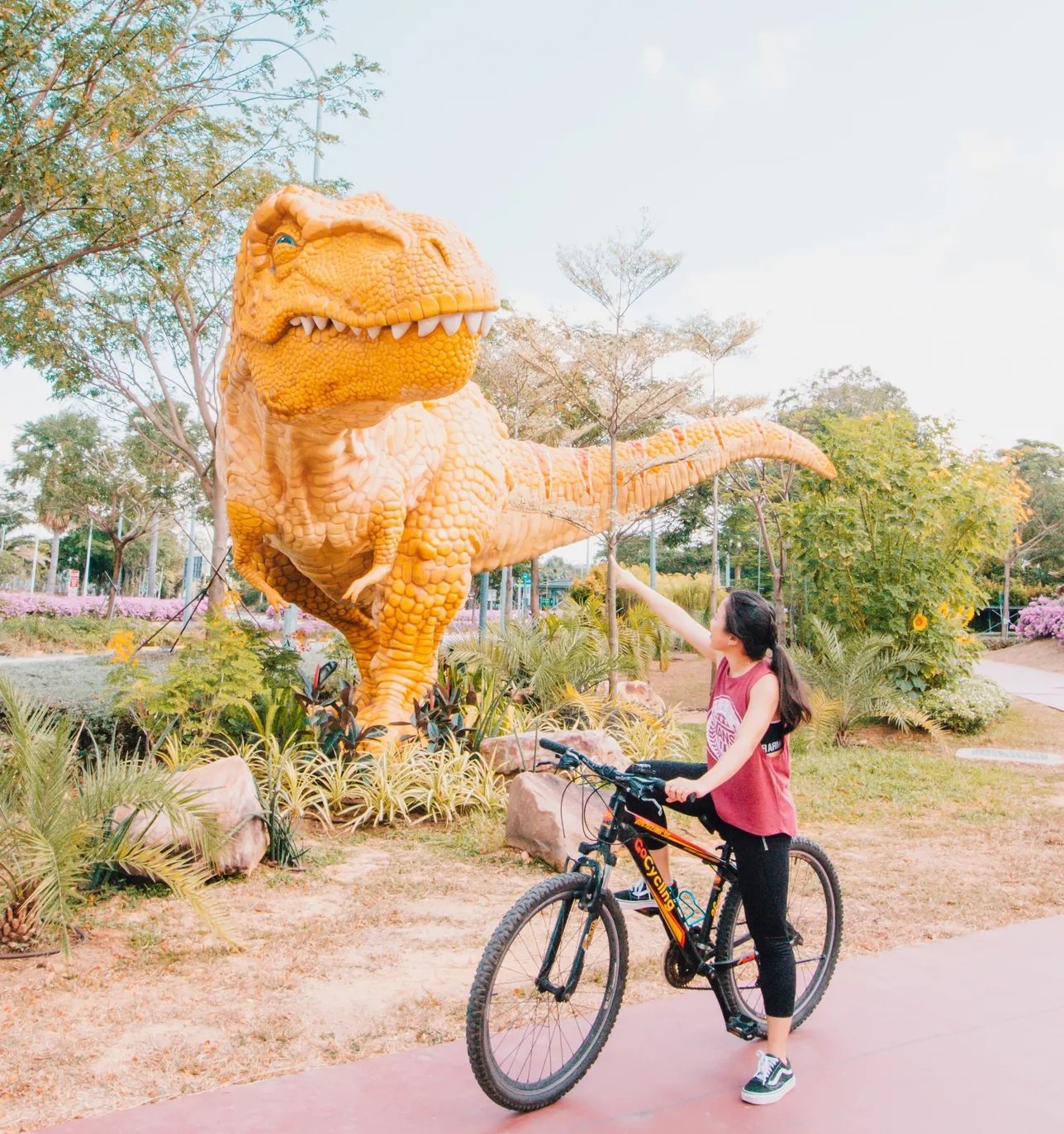 As they are obviously huge, it took 3 weeks just to prepare them from the move.

That included cutting them up so they can be transported easily, then reassembling and repainting them and positioning them at their new homes.

The whole operation required 10 men and a forklift.

New plant decoration was also needed to ensure a more natural look and assimilate the newcomers with the existing Jurassic theme.

Kudos to CAG for thinking of a good way to repurpose the dinosaurs, and adding to an already amazing attraction.

Now that the Jurassic Mile has been boosted with new displays, Singaporeans will be sure to revisit the place to get some new photo ops with the fam.

That’s especially if you’re already heading down for the HERSHEY’S Pop-Up.

Will you be heading down to the Changi Jurassic Mile to see the new dinos? Do share in the comments below.