Double Rainbow Spotted In S’pore On 8 Dec, A Hidden Blessing After The Heavy Rain Chasing away the heavy downpour.

Singapore has been experiencing consistent afternoon downpours in December, usually one of the colder months for our sunny island nation. As the showers gave way to clear skies yesterday evening (8 Dec), a double rainbow made an appearance over some parts of Singapore. 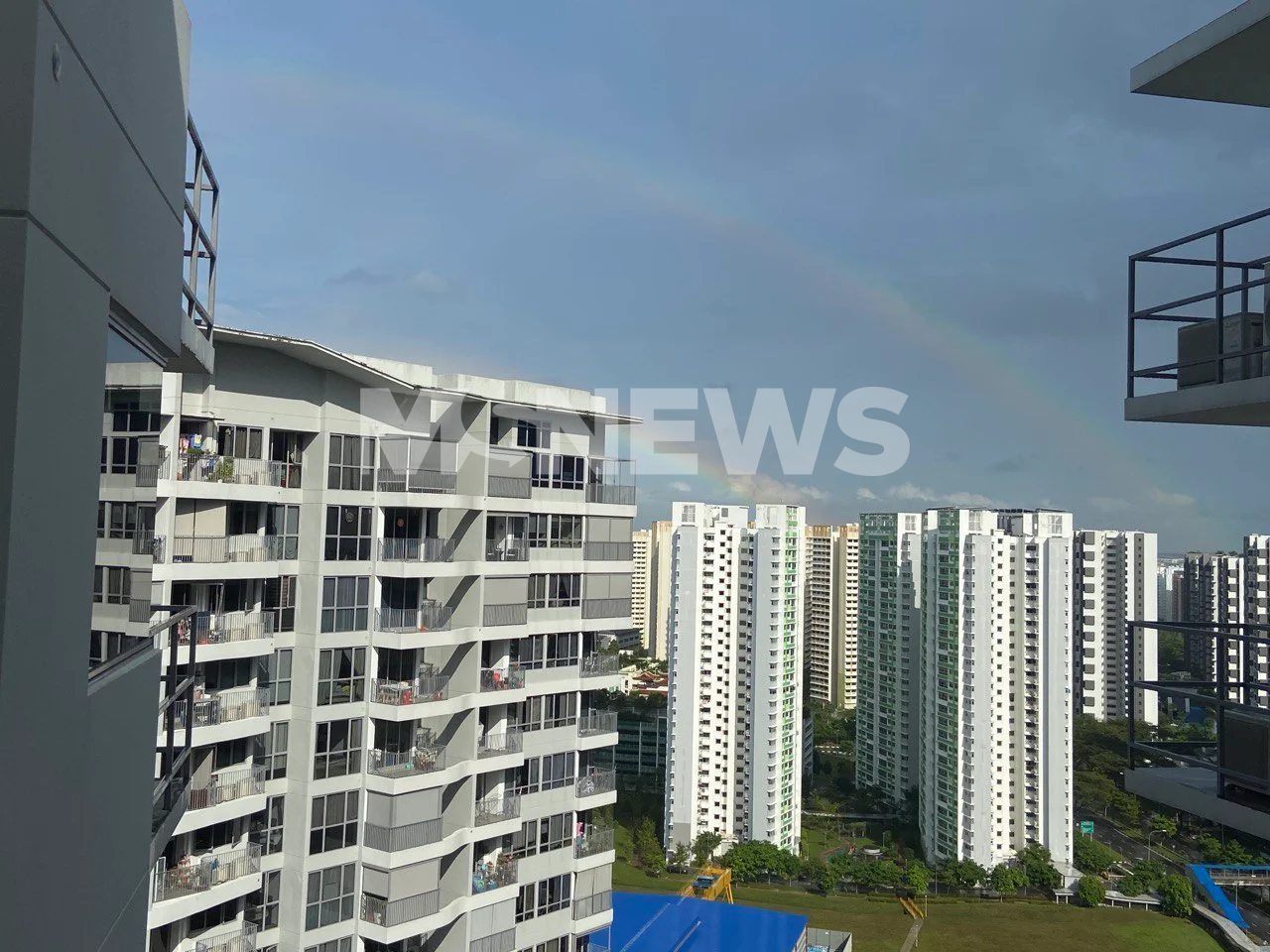 After a period of heavy rain, they show that there are silver linings to every storm cloud.

An MS News reader who lives in Sengkang managed to capture the double rainbow out of his kitchen window after yesterday’s dark storm clouds parted, making way for clear blue skies. 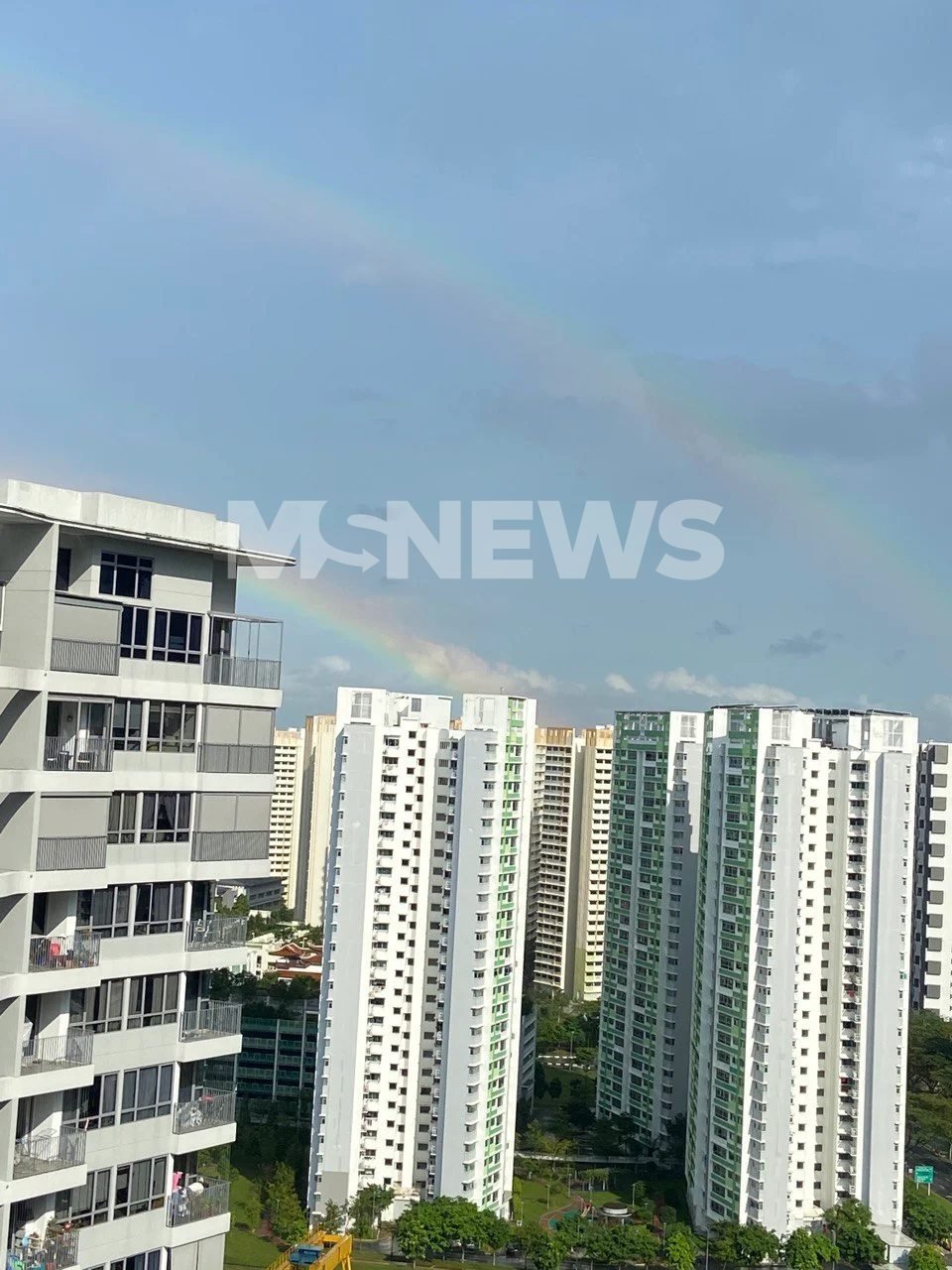 He said the rainbows lasted for only a minute or two before disappearing. He had wanted to capture them with his DSLR, but the spectacle was already gone when he returned. 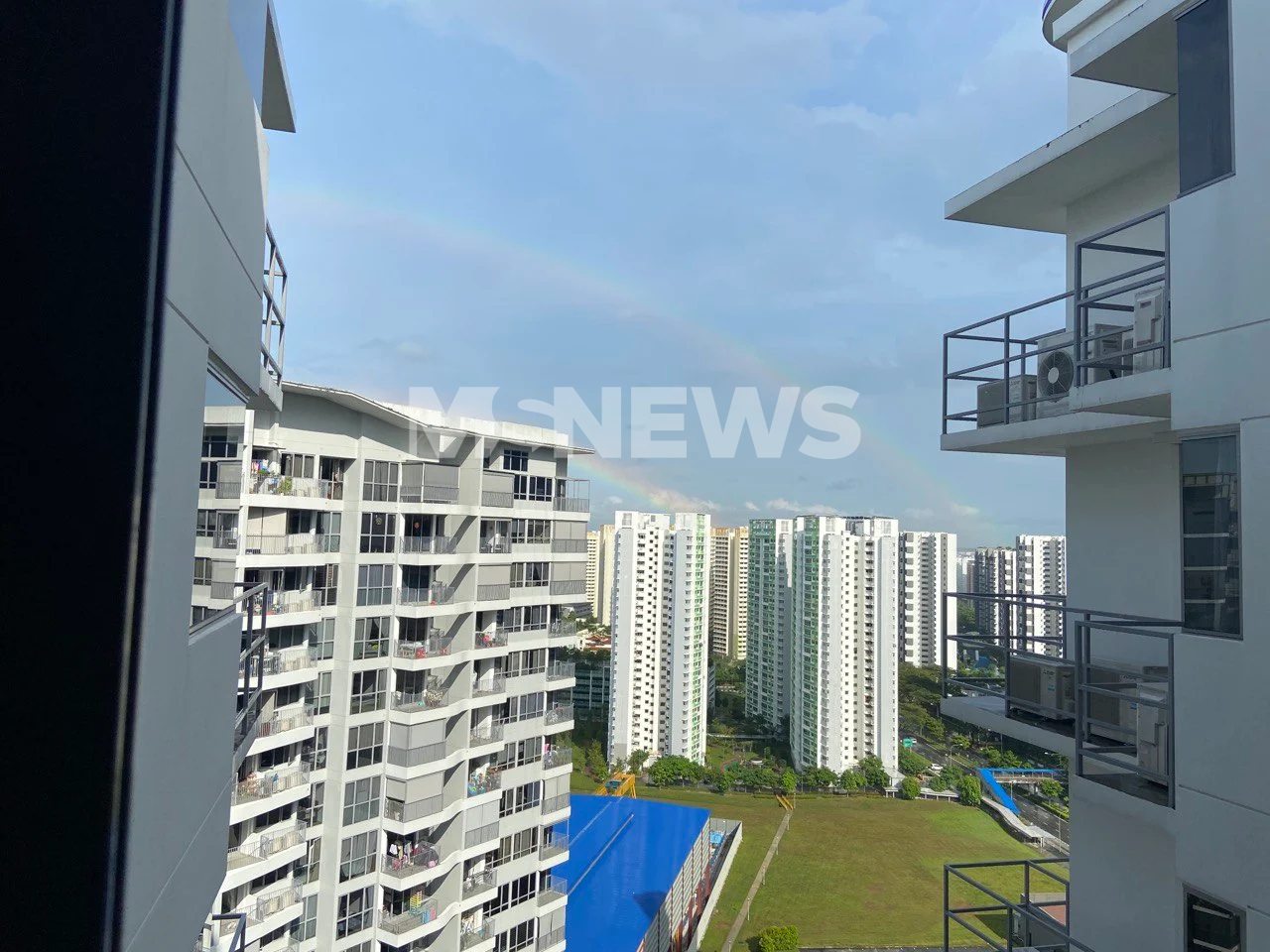 This shows us that nature sometimes chooses to show its beauty in fleeting moments.

Another Sengkang resident managed to captured a wider picture of the double rainbow, showing us the scale of the beautiful sight, which spread over Sengkang’s waterway. 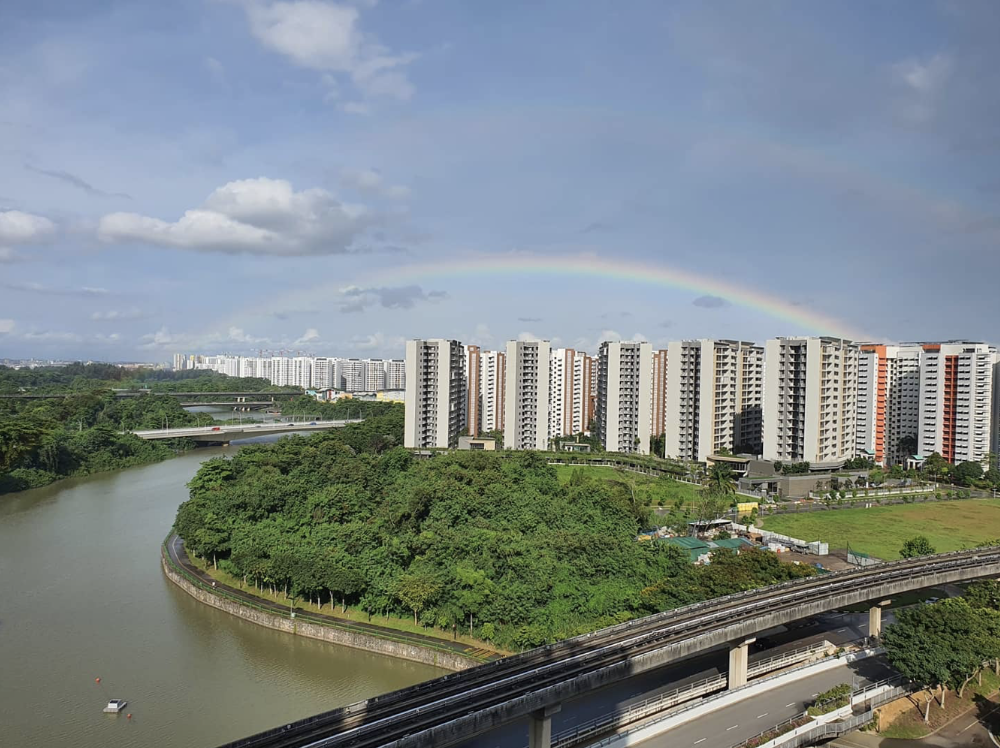 Frank Tham, who stays at Clementi Avenue 1, was also lucky. The rainbows he captured were rather close, allowing his smartphone camera to capture the vibrant bands of colours. 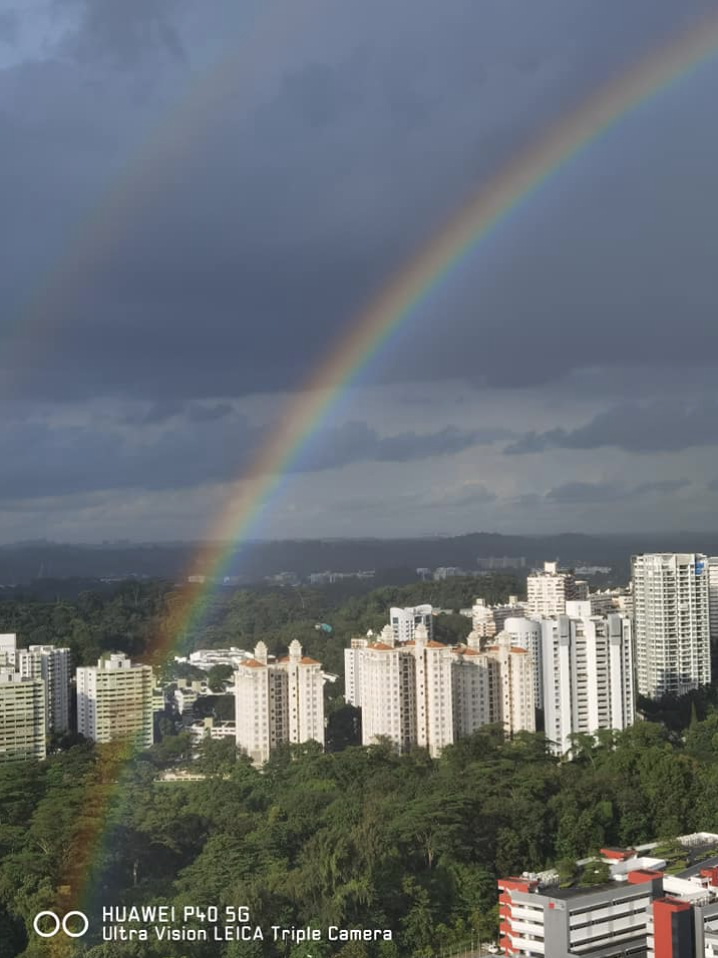 With the double rainbow being so near, we wonder if their two pots of gold were within walking distance.

According to the Met Centre, these beautiful displays commonly appear when the sun is low in the sky, such as in the early morning or late afternoon. As light is reflected twice within a raindrop, they form a primary and a fainter secondary rainbow. 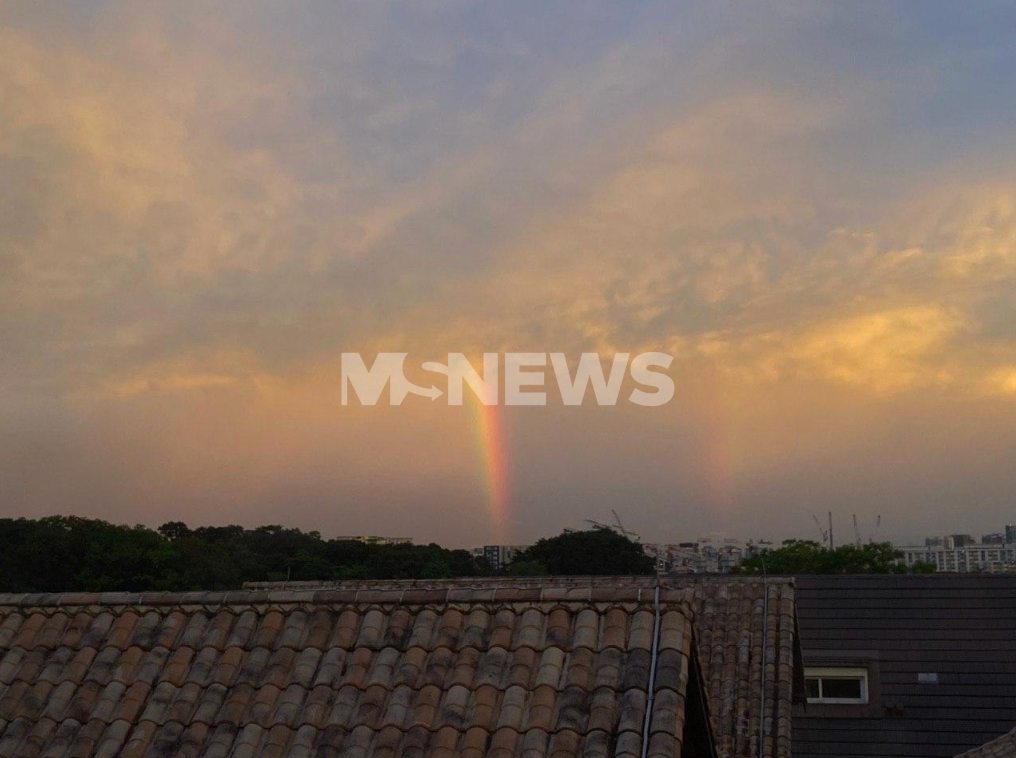 A key feature of a double rainbow is the inverted colour sequence of the secondary, or top, rainbow.

Keeping our eyes peeled after a downpour

As a rainbow’s duration can stretch from mere seconds to a few minutes, those who enjoy their beautiful colours should keep their eyes peeled.

With December expected to be colder and rainy, we hope that future downpours will give way to similar sights in due time.