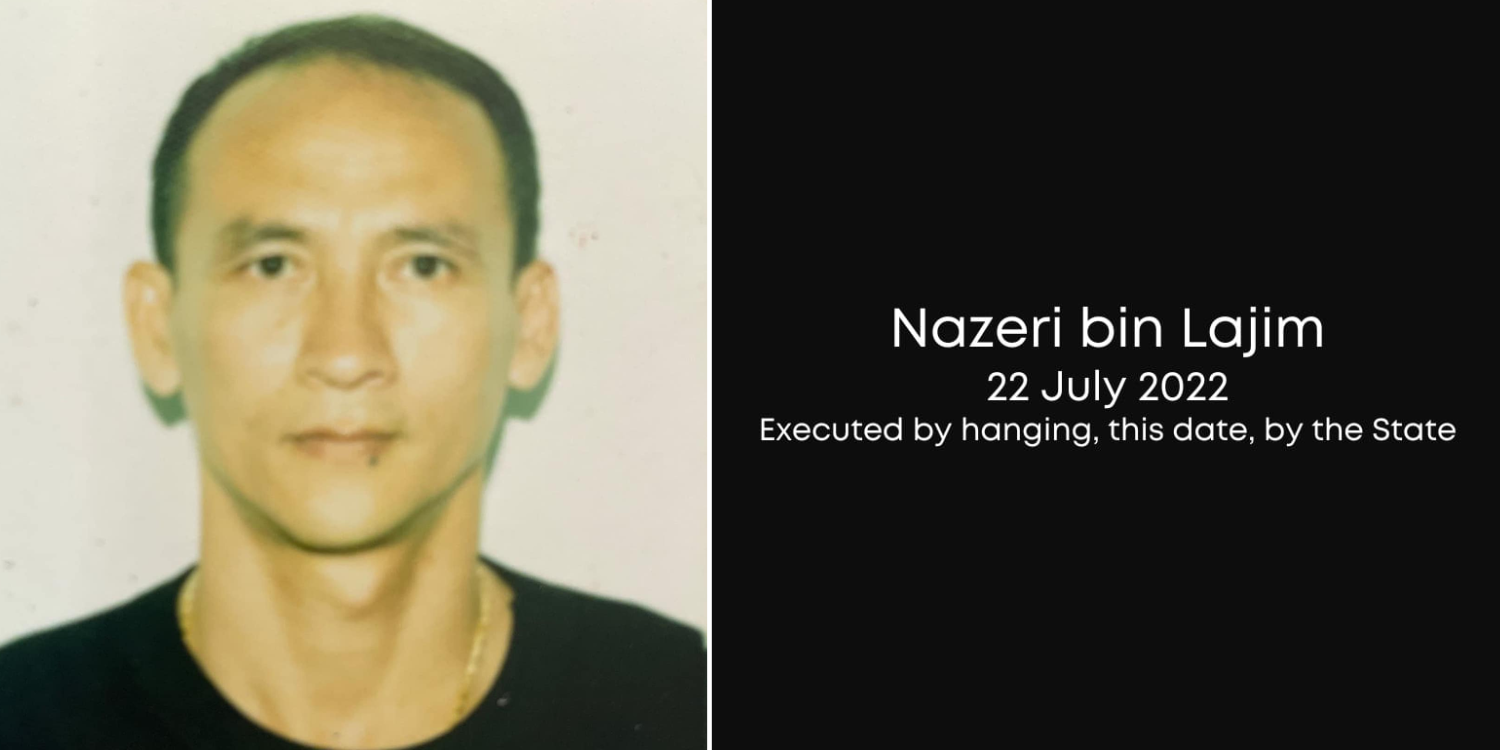 Despite his family’s petition to abolish the death penalty, 64-year-old Singaporean drug trafficker Nazeri bin Lajim was hung at dawn on Friday (22 Jul). 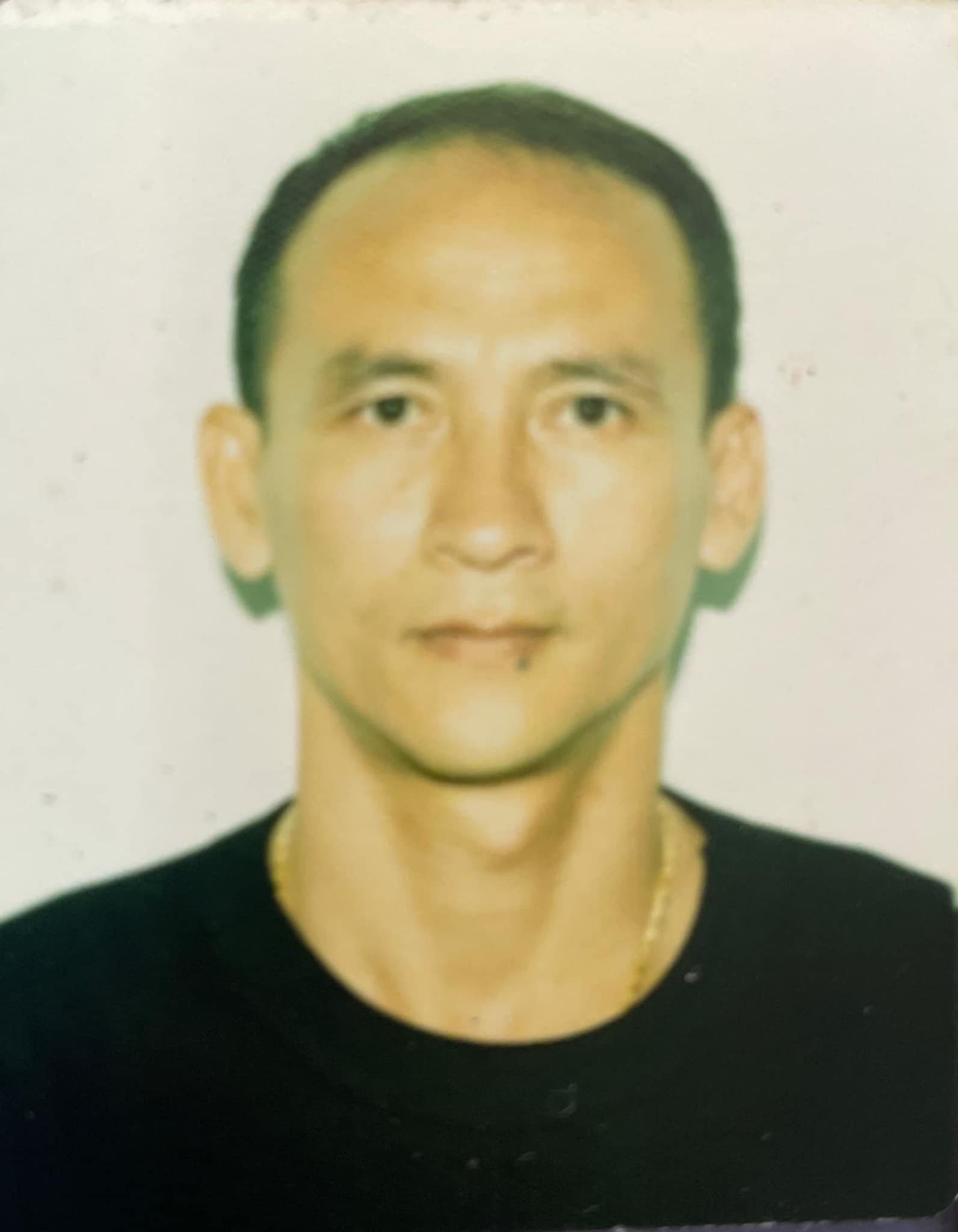 A day before the execution, Nazeri made a last-minute appeal against the death sentence, arguing that his capital charge was “arbitrarily imposed” and had breached his constitutional rights.

However, the Court eventually dismissed the application, calling the eleventh-hour appeal an “abuse of the court’s process”.

In a post on Friday (22 Jul), Facebook page Singapore Anti-Death Penalty Campaign confirmed the execution of Nazeri bin Lajim by way of hanging.

According to her, funeral prayers will take place at Masjid Assyakirin from about 10am, after which the congregation would perform the Friday prayers.

Burial will subsequently be at the Muslim Cemetery while a tahlil ceremony will take place at Masjid Al-Firdaus.

Kokila took the opportunity to welcome members of the public to “stand in solidarity” with Nazeri’s family and pay their respects.

Sentenced to death in Aug 2017

A day before, on 21 Jul, the Central Narcotics Bureau (CNB) issued a statement confirming Nazeri’s execution on 22 Jul.

He was convicted of possessing at least 33.89g of diamorphine or pure heroin for trafficking purposes.

The amount was more than double the 15g capital threshold, which was why he received the death sentence on 8 Aug 2017.

In the years that followed, Nazeri filed several appeals against his conviction and sentence. However, the Court dismissed all of them.

Earlier this month, Nazeri’s family received a notification that the capital punishment would be carried out on 22 Jul. 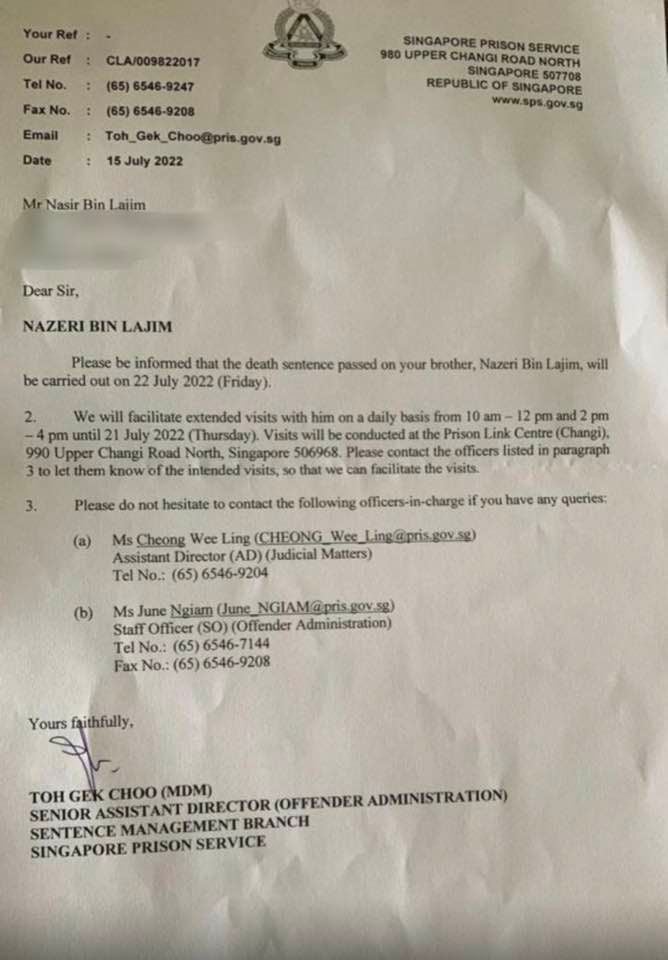 Thereafter, Nazeri reportedly filed another application on Tuesday (19 Jul), which the Court swiftly dismissed on 20 Jul.

He later filed an appeal which the Court similarly dismissed on 21 Jul, one day before his execution.

In his latest application, Nazeri allegedly claimed that his capital charge was “arbitrarily imposed” and breached his constitutional rights. 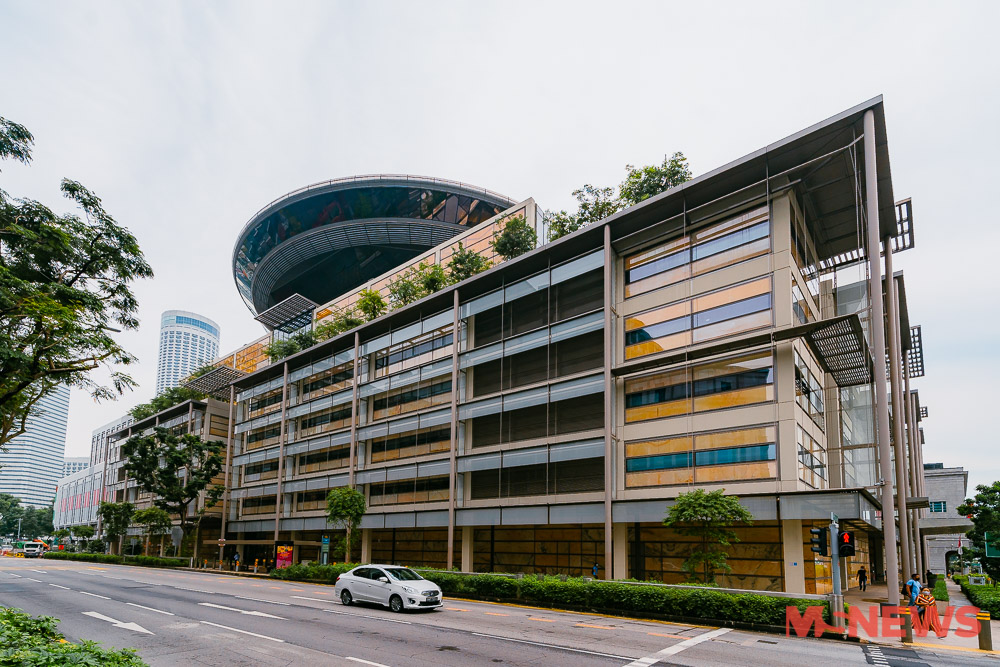 Nazeri argued that other offenders who initially faced drug trafficking charges above the capital threshold had had their charges reduced to non-capital offences.

Citing his lack of competency in legal matters, Nazeri reportedly asked for an adjournment of one to two weeks for him to appoint a lawyer.

The Court, however, dismissed his appeal, describing his argument as “hopelessly flawed” and “entirely devoid of factual basis”.

They also found his application to be an abuse of the Court’s process.

A reminder to stay away from drugs

The death penalty in Singapore will likely continue to attract controversy for time to come. But the final decision will ultimately lie in the hands of the law.

Perhaps the recent executions could serve as a reminder of the severity of drug offences. Then, hopefully, people will stay away from such substances.