Woman Asks Employer To Arrange Transport For Job Interview, Says He’s Not Genuine After He Declines She also claimed that anyone else would have done it for her.

Looking for a job can sometimes be filled with more misses than hits, and it takes strength to keep pushing on.

While we certainly encounter many interesting people as our potential employers, the same can be said for employees.

An employer from Malaysia met a job candidate who asked him to arrange transport for her job interview. 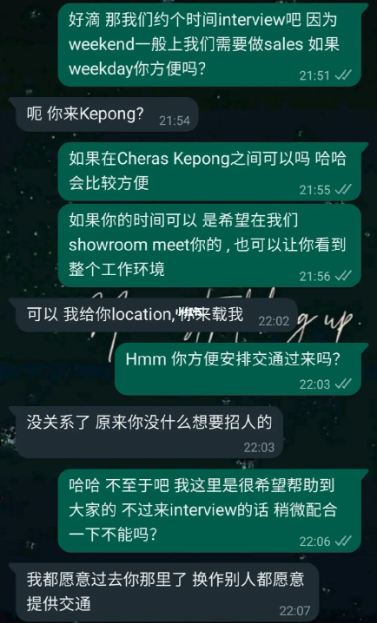 When he declined, she turned down the interview and accused him of not being genuine in hiring her.

The property agent shared via Chinese social media platform XiaoHongShu that the woman had reached out to him first.

After exchanging their names, the agent named Andy asked if she had any experience in property or sales.

Answering no, the candidate then enquired if a degree in marketing would be of help.

Andy said yes, explaining that marketing is a component of their job, before asking if she was familiar with the Cheras area. 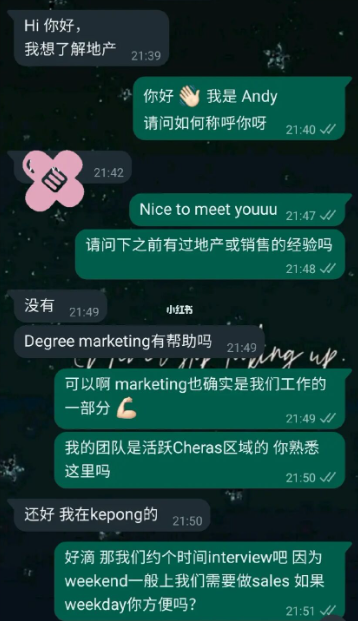 When the candidate said she was unfamiliar as she is based in Kepong, Andy asked if it would be convenient for her to have an interview on a weekday.

At this point, things began to take a turn as the candidate asked Andy if he would come to Kepong, roughly 21km away.

Andy attempted to meet her in the middle – literally – and hoped that they could go to a showroom so he could give her a tour of the work surroundings.

The woman agreed to this, but then asked Andy to fetch her once she had provided her location.

Woman claims anyone else would have agreed to arrange transport

Upon her initial request, Andy asked if it would be convenient for her to arrange her own transport instead.

This prompted the woman to decline the interview opportunity, who went on to accuse him of not being genuine in his hiring efforts.

Visibly attempting to play down the awkwardness, Andy politely disagreed and insisted he was trying to help everyone.

He also asked her rhetorically if it is too much to ask someone to compromise a little if they’re doing an interview.

However, the woman stood her ground, saying that she had already agreed to go to the showroom and that anyone else would have agreed to arrange transport for her.

Easier to attract problems than the right people, employer opines

The employer shared his thoughts on the experience, saying he was at a loss on how to respond. 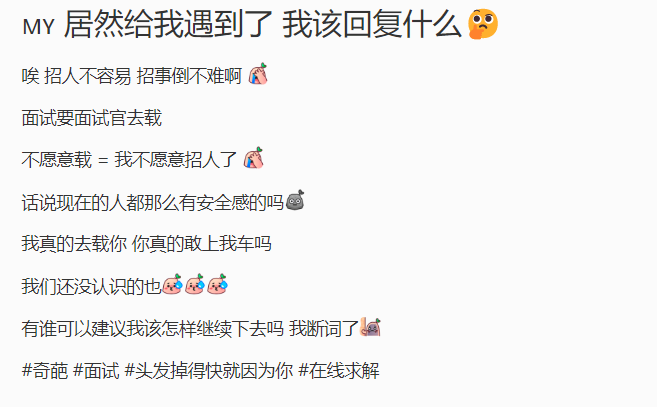 He also struggled to make a connection between refusing to fetch a candidate and refusing to hire people.

Additionally, he wondered out loud if all people in the present were truly so confident in their ability to get a job.

That aside, Andy expressed concerns about whether she would even dare to get in his car if he fetched her, seeing as they are strangers.

He ended the caption by asking for suggestions on keeping the conversation going, as he had been rendered speechless.

The post garnered equally confused reactions from netizens, many of whom were taken aback by the woman’s brazen behaviour.

A XiaoHongShu user joked that those willing to arrange transport should be fetching her all the way to Cambodia.

The dark joke was a reference to the recent rise in victims of scam syndicates who have been kidnapped to Cambodia.

Another user lamented that not a day goes by without meeting an odd interviewee.

Meanwhile, another commenter poked fun at what the woman said about Andy not being genuine in his hiring efforts by saying she was not genuine in finding a job.

As much of a headache as this was, it’s, unfortunately, part and parcel of most employers’ day-to-day.

Hopefully, the hiring process will improve for Andy, and he will find the right person for the job soon.

Featured image adapted from XiaoHongShu and JÉSHOOTS on Pexels.