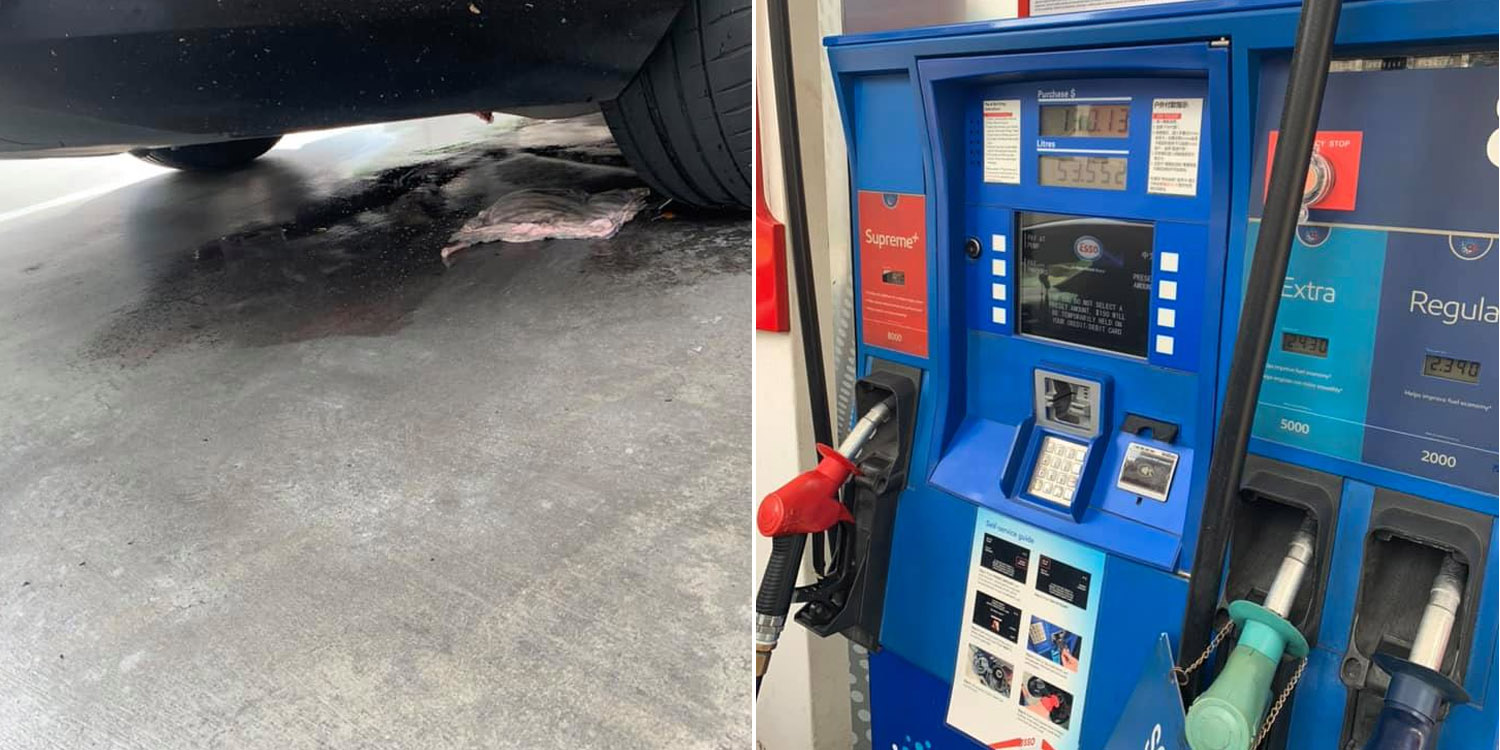 UPDATE (30 May): An ExxonMobil spokesperson said the nozzle was isolated and taken off service for checking. You can read the full statement below.

Though not taught in driving schools, most seasoned drivers would be familiar with how to operate the pumps at petrol kiosks. Thankfully, nothing out of the ordinary happens on most occasions.

However, on Friday (28 May), a driver named Mr Loh who decided to operate a pump at the Bedok North Esso station himself found petrol overflowing from the injector. 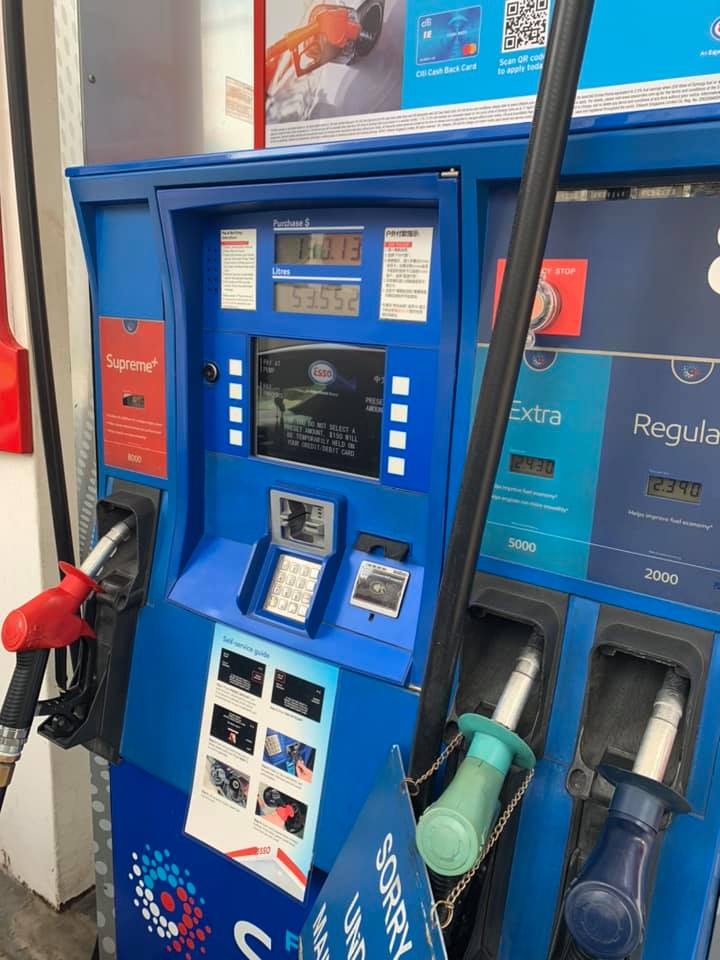 Allegedly due to a pump fault, the driver took to Facebook to express disappointment over the spillage and the kiosk’s safety protocol. You can read the post in full here.

Driver operates pump by himself at Bedok Esso petrol kiosk

According to the post, Mr Loh had visited the Esso petrol station at Bedok North on Friday (28 May). However, as most of the attendants were far away from the pump that he parked at, Mr Loh decided to operate it by himself.

He reportedly set the pump on ‘auto’ mode and moved to another side of his Volkswagen Jetta as he had his phone on him.

A while later, Mr Loh observed that the petrol in his car tank had crossed the 50-litre mark. That was apparently strange as the tank was near-empty when he went for the refill.

Petrol starts overflowing from the pump

All of a sudden, another patron at an adjacent pump shouted that petrol was overflowing from Mr Loh’s car.

Examining the spill, he said that the fuel had flowed all over the car’s body, rim, and tyres. A puddle had also formed on the ground underneath the vehicle.

The man who had notified Mr Loh about the overflow apparently claimed that this was a recurring problem at the pump and quickly informed the kiosk manager.

According to Mr Loh, the manager told one of the other attendants to settle the spillage but showed no sense of urgency.

He then decided to have a word with the manager himself.

Upon seeing Mr Loh, the manager apparently offered a $5 discount. Though the gesture was appreciated, he was rather upset that that was the first thing on her mind.

Moments later, another attendant came in and said that about 2.2 litres of petrol had been spilt.

Already in a flurry, Mr Loh became even more confused by the attendant’s ability to gauge the amount of liquid spilt.

Aware that he himself wasn’t able to estimate the spillage, Mr Loh decided to pay the quoted amount.

But as he returned to the car, Mr Loh allegedly saw one of the attendants closing his car’s filler flap.

He also observed that the spillage kit used was essentially several pieces of rags. 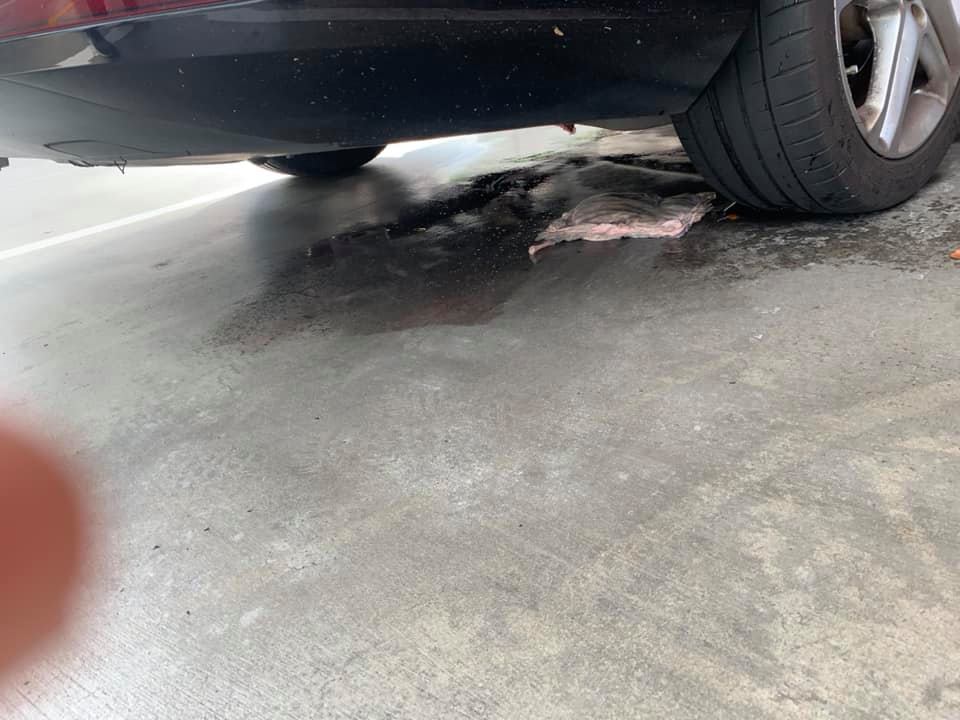 When he attempted to reopen the flap to rinse off the residue petrol, the attendant allegedly told him to stop — a move that made Mr Loh feel as though he was being chased away.

Angered, Mr Loh quickly headed to a car wash at the same kiosk in order to get rid of the leftover petrol.

Ending his post, Mr Loh said he was disappointed by Esso’s spillage and safety protocol. He was also upset with how this was apparently a recurring problem and yet nothing was apparently done to address the issue.

Nozzle was taken off service for checking

In response to MS News‘ queries, an ExxonMobil spokesperson said:

Following the incident that the customer said he had with one of our pumps at Esso Bedok North, the nozzle was isolated and taken off service for checking. It was inspected by a maintenance service provider and verified to be working normally. Fuel dispensing equipment at Esso stations undergo regular maintenance and checks.

We have clarified that 3 of our station staff responded to the customer’s request for help, and they followed existing safety protocols, using oil absorbent pads from the spill kit to soak up the spillage. Safety protocols discourage using water to flush, to avoid spreading the spill.

We have reached out to the customer to explain our process for handling spills and to clarify our station staff’s response.

We remain committed to ensuring the safety of our customers and station staff.

Having petrol overflowing from one’s vehicle is likely no pleasant experience.

We hope Esso will quickly rectify the situation at the pump so similar incidents do not occur again.

What do you think the best response would have been to such a situation? Let us know in the comments below.