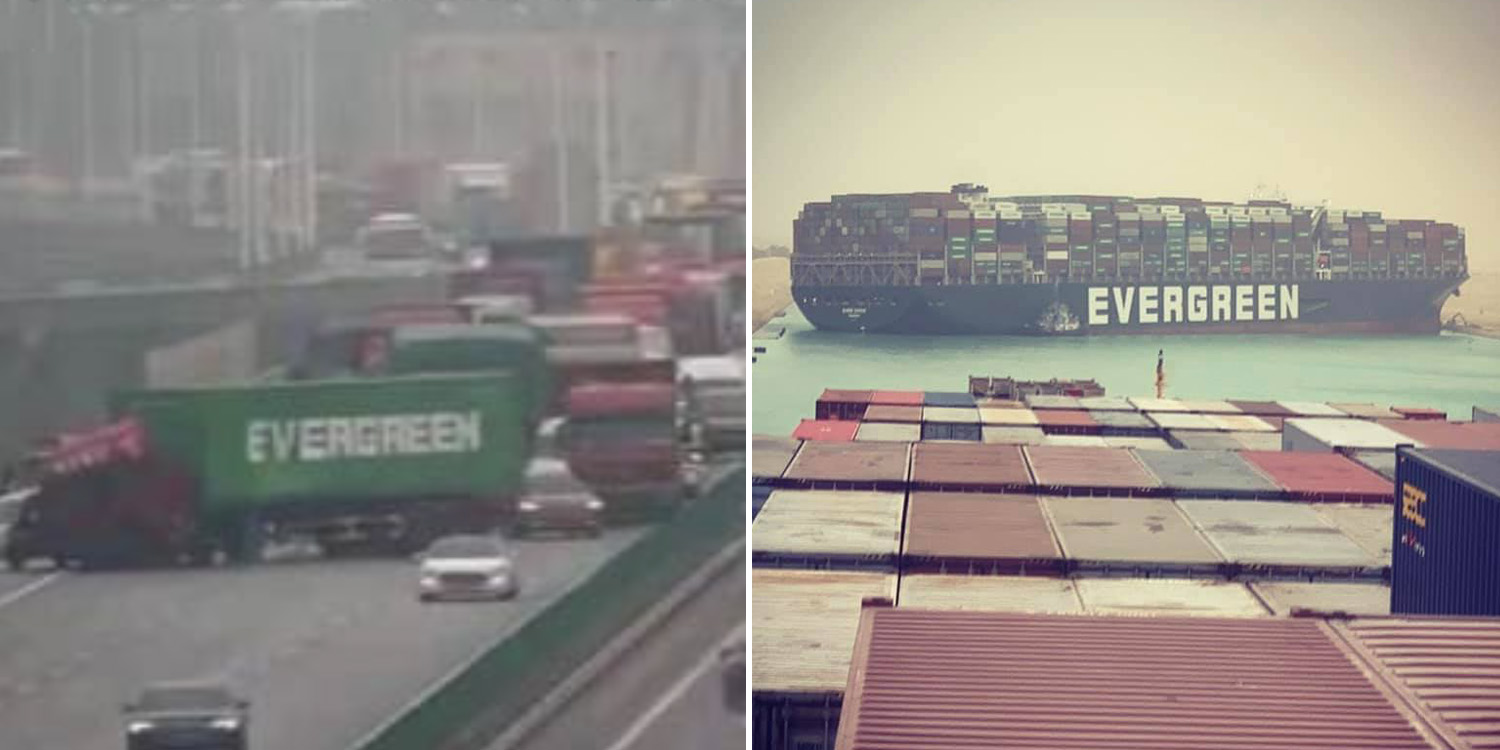 A container ship that had gotten stuck at the Suez Canal has been making headlines after causing one of the worst shipping jams ever seen.

By now, we’ve all seen how the Evergreen ship became the butt of many jokes and memes throughout social media.

It so happened that on Saturday (27 Mar), a container truck in China, emblazoned with the exact same name ‘Evergreen’ got stuck on a highway and caused a huge traffic jam.

Netizens were quick to point out the similarities between the 2 incidents, notably the fact that both had ‘Evergreen’ emblazoned’ on them. 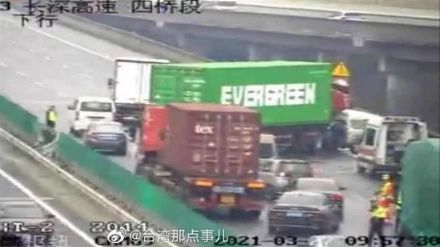 On Saturday (27 Mar) morning at 9.55am, a container truck crashed on a highway at Nanjing, China, reported China Times. 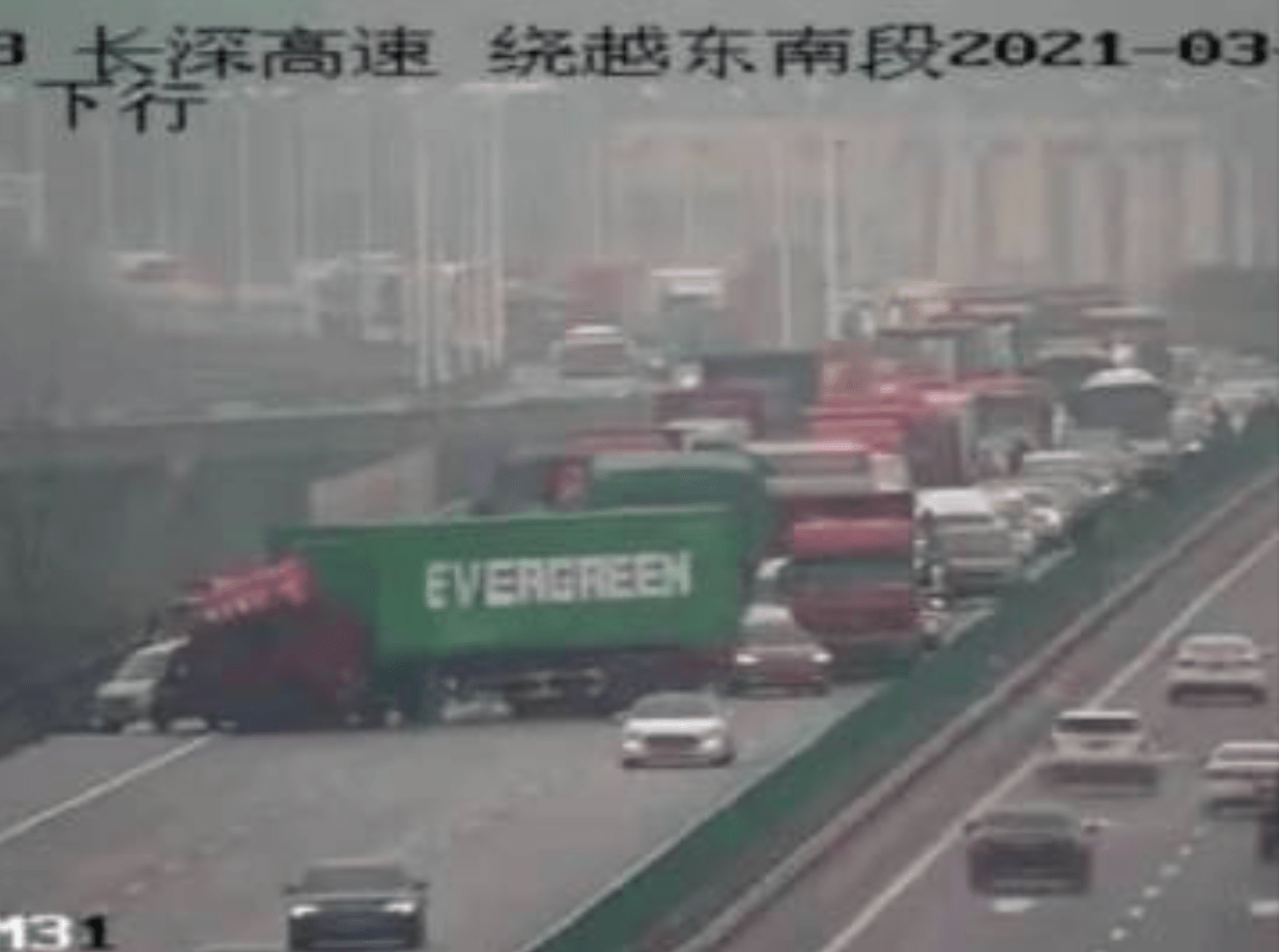 At the time, the truck was carrying a green container with the word ‘Evergreen’ on it.

The accident left the truck blocking multiple lanes, causing a massive jam on the Changshun-Shenzhen highway during the peak hour.

Seeing the surveillance footage of the accident, netizens noticed that the accident looked really similar to the current scene at Suez Canal. And it wasn’t just the company name. The truck even seemed to be in the same diagonal angle that the ship was stuck at. 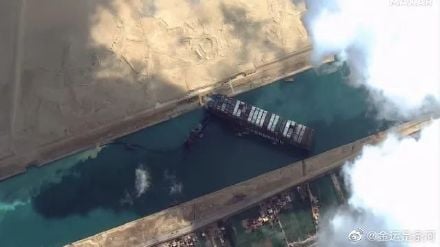 Soon, photos of the truck went viral on Weibo, the Chinese social media site as netizens joked that the company ‘Evergreen’ seems to trying to conquer both land and sea.

Translation: Was checking on the cranes this morning but found out that the Evergreen truck had also jammed up our expressway. Conquering sea and land all at once?

Another netizen also jokingly said that the company seems to be rebelling against the world.

Translation: Is Evergreen trying to rebel against the world? They caused a jam at the Suez Canal and now a highway?
Source

Truck does not belong to Evergreen

However, despite the name, China Times reported that the truck was not Evergreen company’s truck and just so happened to be carrying an Evergreen container.

They further clarified that Evergreen does not operate a trailer business in China.

Therefore, Evergreen is not responsible for the accident on the highway.

These events are certainly a series of unfortunate events that lined up together.

At least, netizens got a good laugh out of the uncanny similarities between the 2 accidents.

Currently, efforts to dislodge Ever Given, the ship stuck at Suez Canal, is intensifying as concerns rise over how the blockage will affect global supply chains.