On 17 Sep, it was announced that Mr Tan Chee Wee will become the CEO of the Early Childhood Development Agency (ECDA) from 15 Dec.

Mr Tan was the first inspector-general at the Singapore Armed Forces (SAF) and held the rank of brigadier-general before his retirement from the SAF.

The news raised questions over the number of senior SAF officers joining the Civil Service in leadership roles.

Aljunied GRC MP and Workers’ Party member Gerald Giam has since submitted a Parliamentary Question (PQ) on the topic. 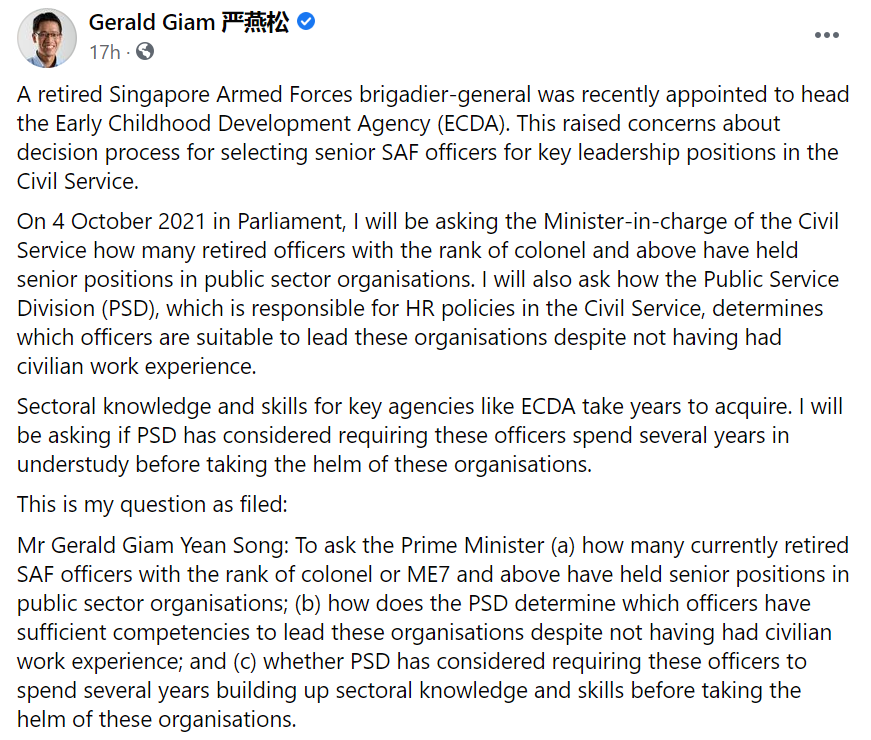 He wants to know the number of retired SAF officers that have gone on to hold senior positions in the public sector.

He also wants to ask the process as to how the officers are determined to be competent enough to hold these roles.

Mr Giam said in a Facebook post on Saturday (2 Oct) that he’s submitted a question regarding the topic of top SAF generals retiring and heading to the public service.

He will ask the following questions in Parliament on Monday (4 Oct):

The PSD is responsible for HR policies in the Civil Service, Mr Giam said.

Does being an army general translate to being able to manage in the public sector immediately?

Mr Giam said that it takes years to acquire sectoral knowledge and skills for key agencies such as the ECDA.

Hence, the questions on whether these retired officers have gone through years of understudy in order to pick these skills and knowledge up.

The public sector will naturally draw attention from the public given who it’s serving.

And if leaders are taken from the military and put in leadership roles immediately, there will definitely be questions asked.

We hope that these questions will be answered in Parliament so that there’s clarity on how these former army officers are selected.