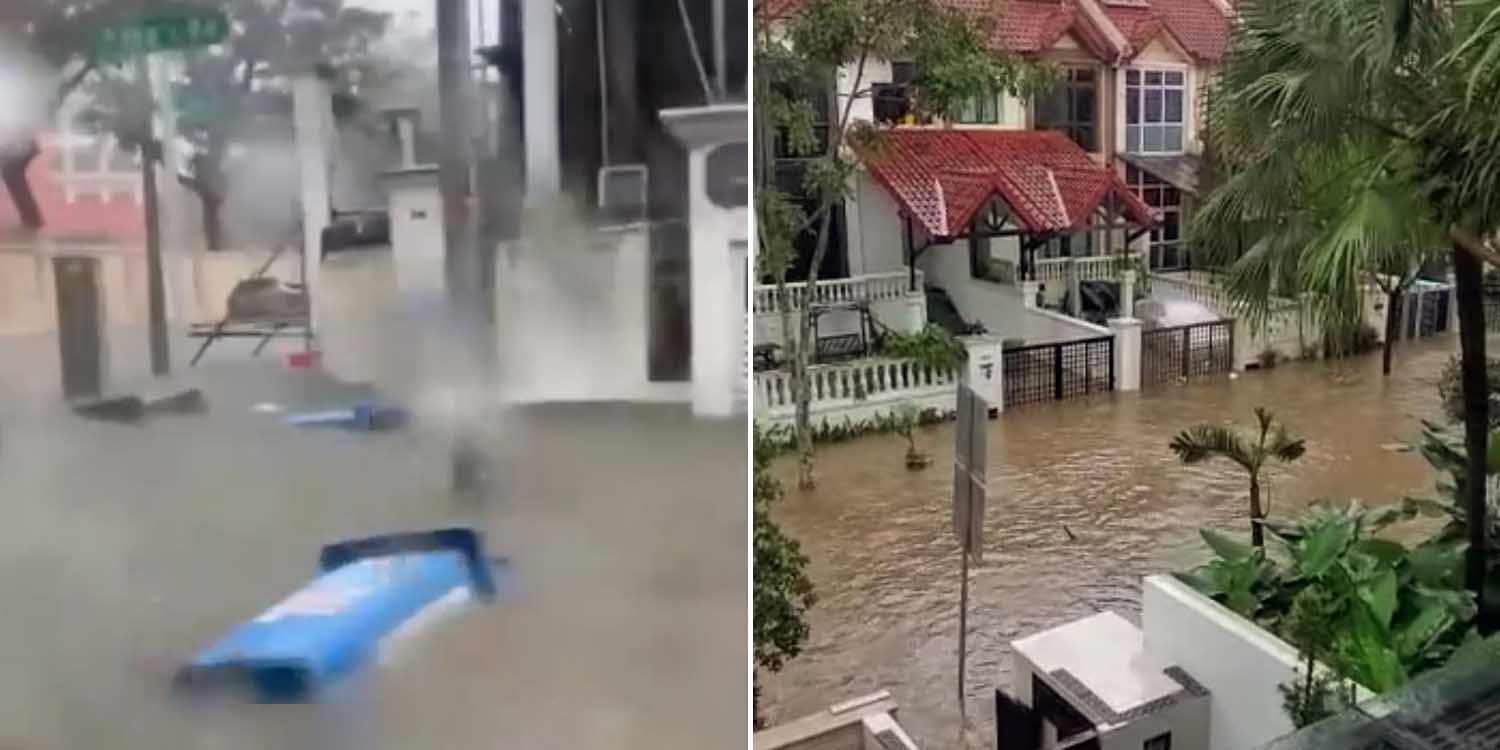 UPDATE (11 Nov): PUB said the flood was caused by fresh grass clippings that clogged the drop inlet chambers along King’s Road and the adjacent Prince Road. You can read their full statement below.

While many may rejoice at recent sweater weather thanks to incessant rain, thunderstorms also tend to bring flash floods with them.

On Tuesday (9 Nov), videos of a ponding situation along King’s Road in the Bukit Timah area started making rounds on the Internet.

In one video, the flood level appeared knee-deep, sweeping dustbins and other debris down the road.

Dustbins and litter swept away by floodwaters

The 27-second video showed high water levels. Dustbins and litter from the residential area were swept away and seen floating in the murky waters.

As they drove along the road, the tyres of parked cars were semi-submerged. 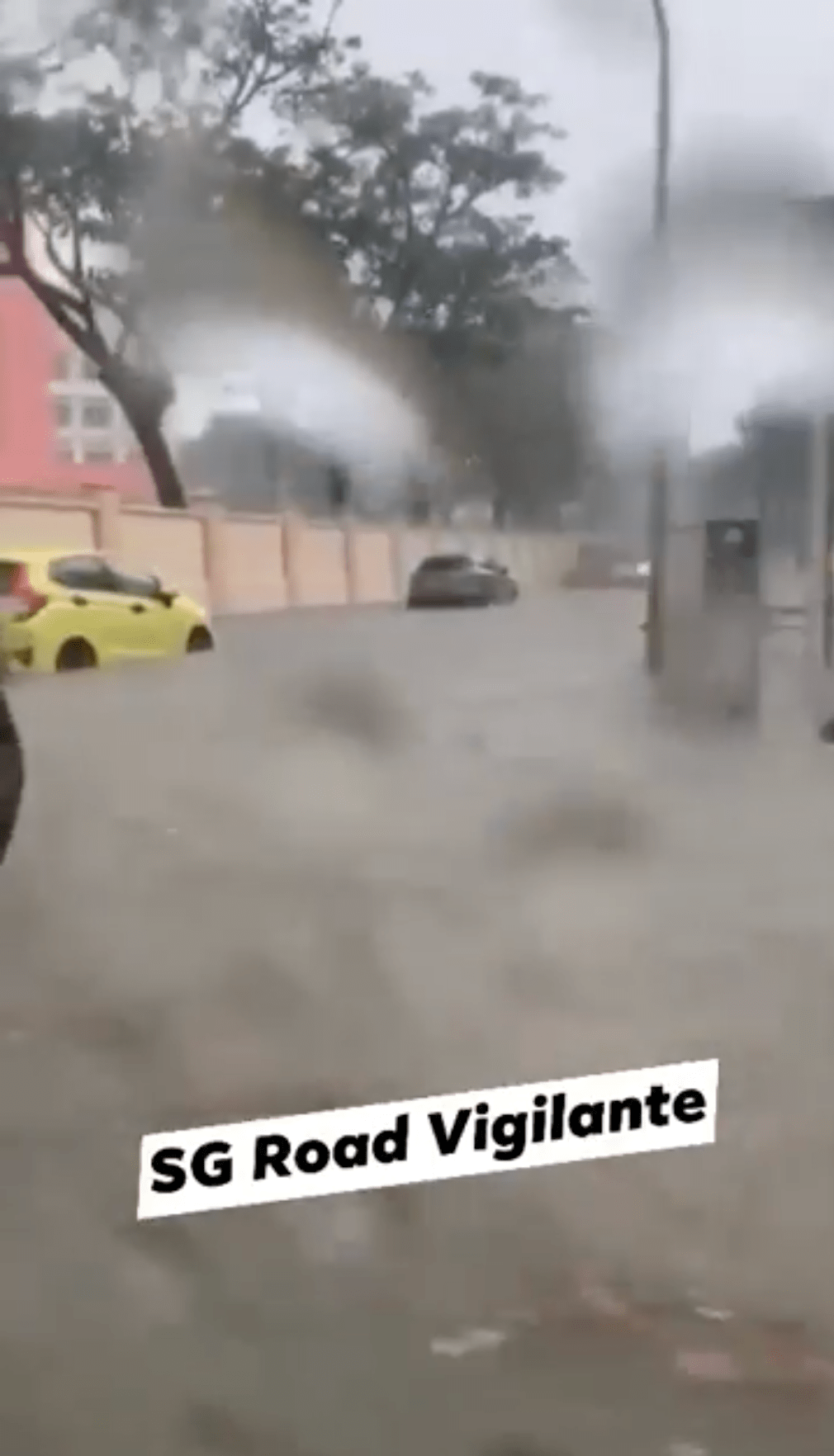 Kerbs and sidewalks were covered entirely by the waters.

Just outside Nanyang Primary School, a student and an adult were spotted trudging through floodwaters that reached knee levels.

In another video, shot from a higher level, the whole street was inundated.

It is unclear what time the videos were shot. But on Tuesday (10 Nov) at 3.13pm, PUB issued rising water and potential flash floods warning in several areas. 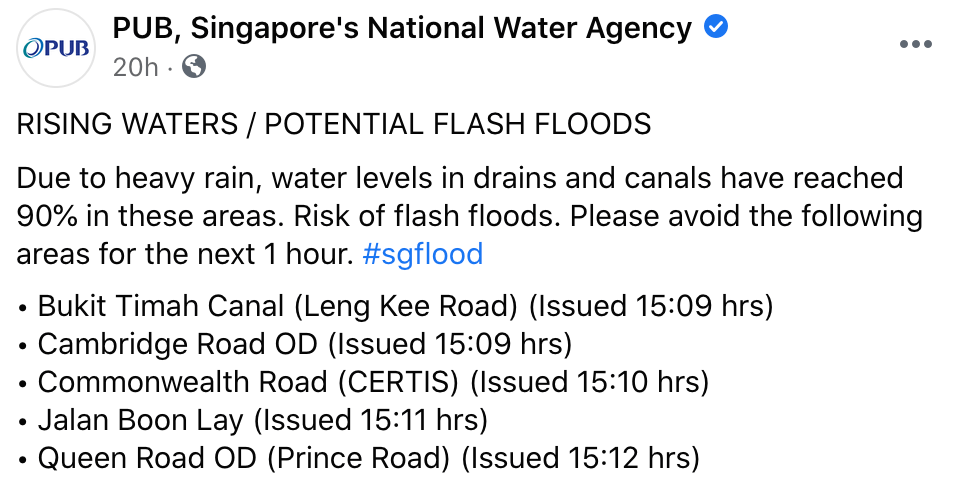 These affected areas included Queen’s Road and Prince Road, which were adjacent to King’s Road.

The public was urged to avoid these areas for the next hour.

In response to MS News‘ queries, a PUB spokesperson said they were informed of the flooding at around 3.30pm. It occurred along a 50m stretch of King’s Road, which is not a flood hotspot.

The Quick Response Team was dispatched and arrived in 30 minutes, but the flood had already subsided.

Here’s the rest of their statement in full:

PUB conducted our post-flood investigation and found that the drop inlet chambers along King’s Road and the adjacent Prince Road were clogged with fresh grass clippings.

These inlet chambers are meant to channel rainwater runoff from the road into the drainage system, and must not be blocked. We assessed that this blockage was the cause of the flooding.

After the debris in the inlet chambers had been cleared, PUB checked the recent activities in the area and learnt that there were grass cutting works done in the morning on the same day. We are reaching out to the relevant parties to follow up.

Singapore has been seeing higher rainfall in the past week, and more showers are expected to come our way.

There will be risks of flash floods in vulnerable areas. Hence, we must remain vigilant and steer clear of flooded locations during and after a storm.

In the meantime, PUB has also launched a Telegram channel to provide timely updates on heavy rain, flood risk, and flash floods. You can subscribe to the channel here.