UPDATE: The customer updated her post to state that foodpanda has reached out to her for a refund. The article has been updated accordingly to reflect this.

During this time of Phase 2 Heightened Alert, people are turning to food delivery platforms more as dine-ins remain closed until 13 Jun.

However, this comes with its own set of issues. It’s unavoidable that issues may crop up, but the hope is that they’ll be resolved without incident.

This foodpanda customer, however, alleged that she was unable to receive a refund despite a rider cancelling her order. The alleged reason was that the customer didn’t show up at the delivery address despite the rider waiting for over 10 minutes.

However, the customer disputes this, stating that the rider was unable to locate her block in Bukit Panjang.

Ms Farhana, the customer, recounts the incident as follows.

On 28 May, Ms Farhana placed an order with Tuk Tuk Cha at Hillion Mall via foodpanda.

She received a missed call at 8.03pm and returned the call at 8.09pm, to which the rider – who’d called her – said that he can’t find her block in Segar Road.

He apparently claimed that he was at Blk 456 then.

Ms Farhana then gave him the directions to her block after learning that he wasn’t too far away.

After 3 minutes, she called him again, and he said “I CANNOT FIND UR BLK!”, before allegedly slamming down the phone.

Her order was cancelled after that.

Foodpanda customer learns that she can’t get refund

Ms Farhana settled the dinner issue within half an hour after making the order using another delivery platform.

But the issue with the foodpanda order remained, so she sent an email to foodpanda.

The response she received was that “we are unable to proceed with the refund due to our rider tried to locate your location but the rider could not locate it.”

On top of that, she learned that she will not receive a refund.

When questioned about the reason, foodpanda’s customer service team responded:

Ms Farhana disputes this account as she was told that the rider couldn’t find her block.

She says that she also has evidence from her IP camera that the rider didn’t show up between 8pm and 8.10pm.

Additionally, she also disputes the claim that she was “unreachable” as she responded to the rider’s call within 6 minutes.

After the email correspondence, the service recovery representative responded that due to being “unable to arrive at an amicable solution”, the refund will not be given.

Unfortunately, despite talking to 2 other people, Ms Farhana was unable to get her refund.

She disputes the official account as she claimed she was not unreachable and replied to the rider in 6 minutes.

In an update to the original Facebook post on Tuesday (1 Jun), Ms Farhana shared that foodpanda has reached out to her and confirmed that she’ll receive a refund. 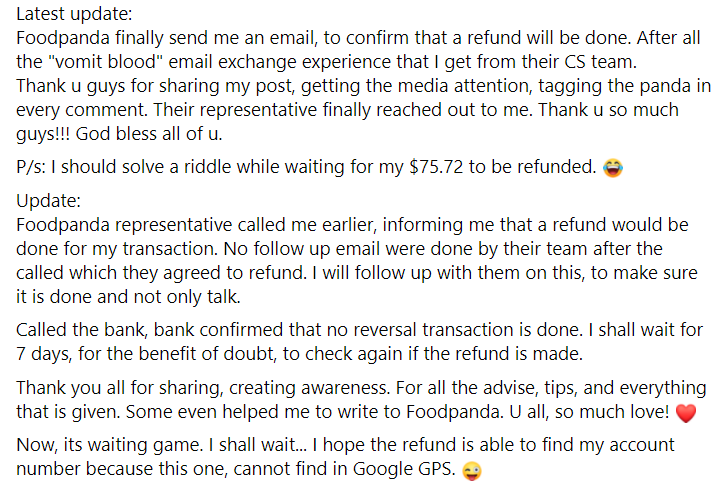 She thanks everyone who’ve helped to raise visibility for her issue in one way or another.

Good to hear that refund will be given

MS News has reached out to foodpanda regarding the incident.

We’re glad to hear that Ms Farhana will get the refund, and that she won’t be punished for an order which she didn’t receive.

This is not to mention that given possible discrepancies in the recounts, perhaps foodpanda or the authorities may wish to launch an investigation.