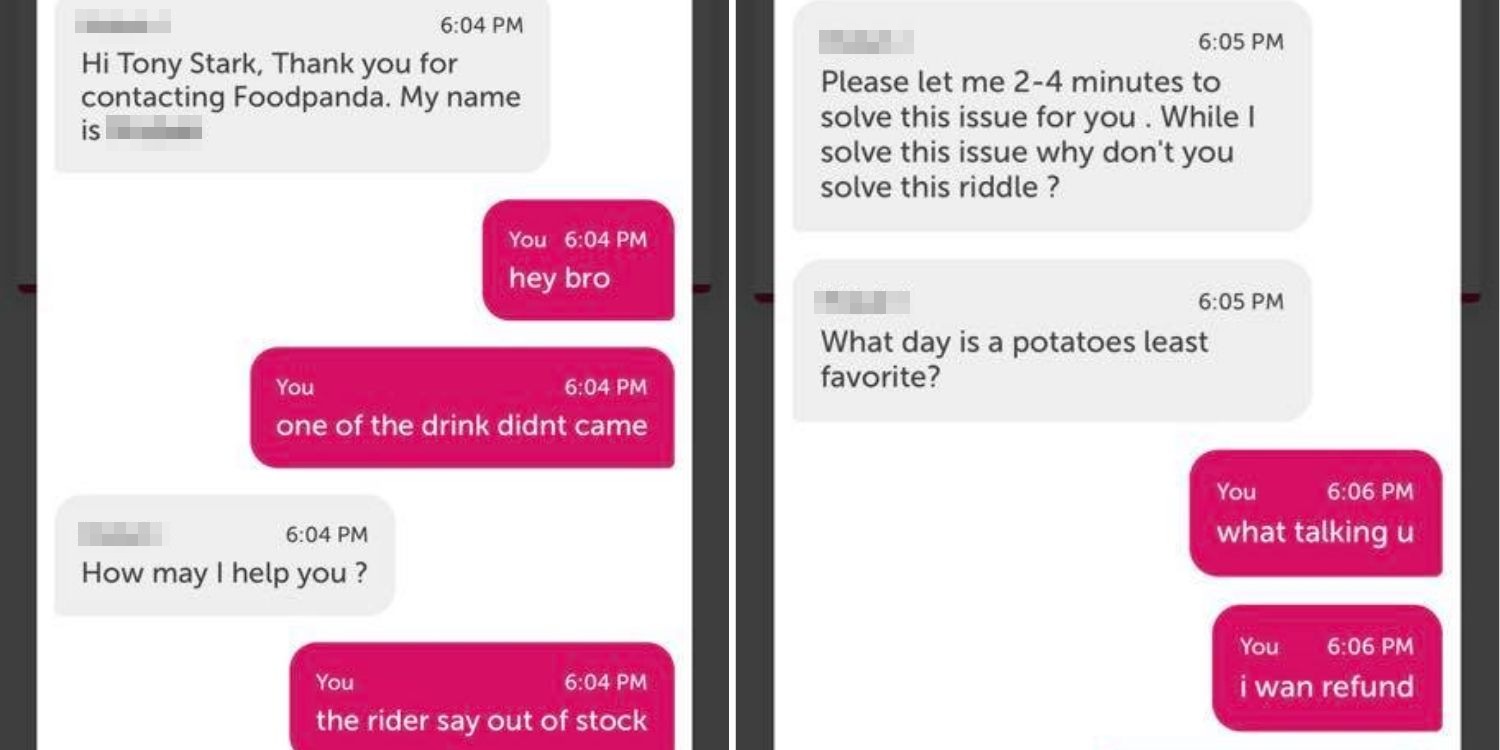 Turning to customer support is the last thing you’d want to do after making an order, especially when it concerns food. You’re hungry, likely agitated and surely have no patience to deal with the conversation.

But a Foodpanda help center operator found a creative way to relieve those feelings just a little — by giving the customer a riddle.

The customer’s equally creative reaction was so priceless, you’d have to see it to believe it.

If you’ve made a complaint or enquiry about an order before, you’d know the drill. State your issue an order number, and then wait for a solution.

Things were going exactly in that order for Facebook user Mr Lee, who apparently went by the name “Tony Stark” in his Foodpanda profile.

He even started the exchange by addressing the operator as “bro”, keeping the tone friendly.

After stating his problem in brief, comprehensive sentences, he awaited a reply.

Each customer has a specific order and situation, so operators often take some time to get back to us.

Instead of letting Mr Lee wait with nothing to do, the operator seemed to think that keeping him on his toes would help seize his attention.

So he gave Mr Lee a riddle, after first explaining that he needed a few minutes, and asking:

The riddle itself appeared simple, though Mr Lee’s response was not what we expected.

Understandably, Mr Lee seemed stumped and in disbelief over the suggestion, which teased out the most Singaporean remark out of him:

What talking u? I wan refund. U ask me solve riddle.

But his next message was what left many netizens, including us, in stitches. Mr Lee countered with a question of his own, though one that was not quite as riveting:

Prawn got how many leg u tell me first.

Unfortunately, the screenshot of their exchange ends there, so we don’t know if either them eventually answered the other’s question.

An amusing yet heartwarming exchange

While we sadly can’t find out what day is a potato’s favourite, we hope Mr Lee got the refund he requested for, if his situation truly warranted it.

Customer satisfaction-wise, we’d certainly have to give it to the operator for engaging in such a refreshing way while still attending to a customer’s needs.

In a time when virtual conversations can get rather straining, especially since it’s all we’ve had in quarantine, lighthearted ones like these are a godsend.

Oh and in case you’re still wondering how many legs a prawn has — it has 10 pairs, 3 with claws. You’re welcome.