Grab Driver Finds Passenger’s Phone & Rates Himself 5 Stars, Then Throws It Away ‘Cause Lazy Return

There will come a point in your life when you encounter a possession that belongs to someone else, and the first instinct would probably be to return it.

For one Grab driver, perhaps starved of positive reinforcement, his initial reaction was to ownself give ownself 5 stars instead.

You’d think he’d return the phone after that, but nope. Into the bin it went.

For this act, and an unrelated offence of posting a threatening message on social media, Alvin Ng Liang Dong was fined $5,000 and ordered to pay the phone owner $500.

Passenger accidentally left her business phone in the car

As reported on CNA, Ng drove a 28-year-old sales manager to her destination and dropped her off at 9am.

In a moment of carelessness, she left her phone in the car. This phone appears to be for business use as its primary purpose was to book Grab fares and no SIM card was detected.

Ng found the phone in the back seat, and instead of wondering if he should return it, took the opportunity to give 5 stars to himself.

After the self-congratulation – despite arguably not having done anything to deserve that – he continued with his day of driving passengers.

Although Ng was going to return the phone at first, he decided at this point to weigh up a cost-benefit analysis.

Didn’t seem worth the travel, he probably thought. He thus elected to dispose of the phone in a bin while at a petrol kiosk.

The victim, meanwhile, discovered her phone had gone missing that day after work.

After some sleuthing the next day, she checked her Grab account and discovered a 5-star rating she didn’t give. 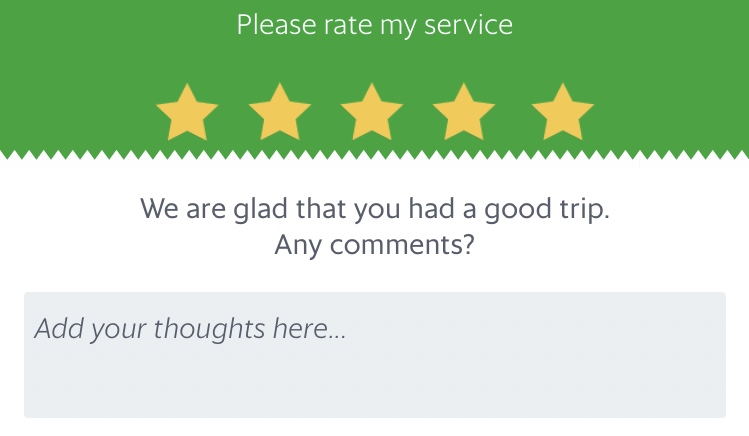 Yep. That’s what busted him – the rating.

See la self high 5 some more.

When confronted with this irrefutable evidence – I mean, nobody would do something bo liao like giving some random driver a 5-star rating upon finding a phone – Ng lied.

When caught, he admitted that his “laziness and bad planning” had led to him throwing the phone away.

Ng has since stopped being a Grab driver.

Ng was also involved in another incident of customer rage this year, wherein he criticised a cashier on Facebook that he’d had a run-in with, after seeing her being awarded for customer service excellence by Caltex Singapore.

During said run-in, he’d thrown a metal sign at her after a dispute over a discount. She’d allegedly criticised his upbringing.

5 is fast becoming an unlucky number for the guy.

No reason not to return lost property, don’t be lazy

Even if there is no obvious benefit in performing a good deed, there’s no harm in doing right by others and returning the property anyway.