Grab Driver Wants Passengers To Wake Up On Time

Unless you’ve been living under a rock, you must have seen recent footage of a private-hire driver being accused by his passenger of kidnapping.

Perhaps in light of recent dramas, one Grab driver took matters into his own hands and put up a warning in his vehicle, urging passengers not to ask him to speed, even if they were running late.

One of his passengers uploaded an image of the notice on the Singapore subreddit on Wednesday (13 Mar).

Here’s a look at the “not so gentle reminder”. 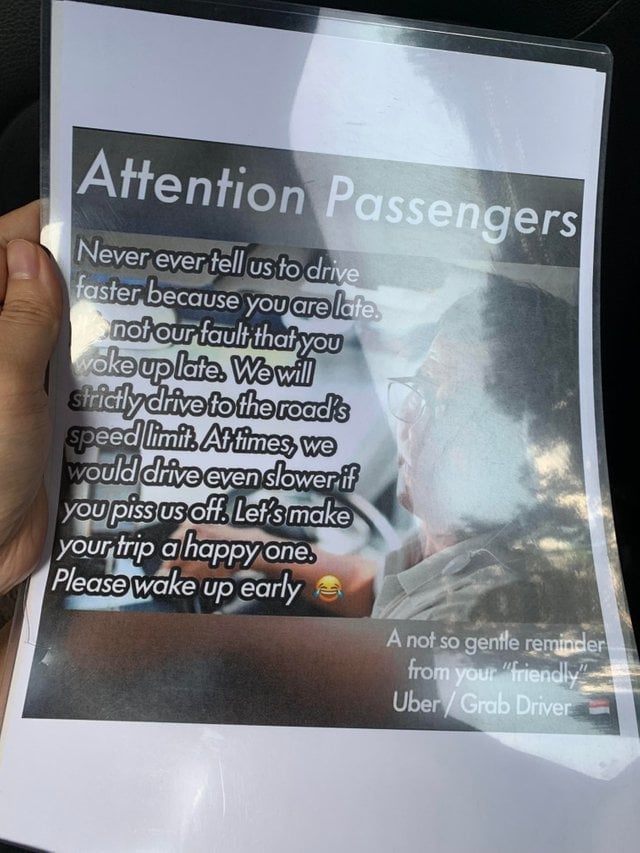 The Grab driver starts off with something most of us can relate to — asking the driver to drive faster because we woke up late.

While most drivers may comply with the request, this driver is adamant on sticking to the road’s speed limit, presumably for safety reasons.

Additionally, he claims that it’s not the drivers’ fault that their passengers woke up late.

It’s not our fault that you woke up late.

He also warned that drivers may instead go at a slower pace if they were ticked off.

In the end, he gave passengers one solution to avoid all the unnecessary hostilities — wake up early.

But don’t people take Grab rides mostly when they are late?

Redditors have their say

The driver’s “not so gentle reminder” sparked heated discussions on the Singapore subreddit.

One redditor whose father worked as a private-hire driver agreed with what was said in the warning.

Some redditors found fault with the manner that the Grab driver used to bring across the message.

Another redditor also shared that he had encountered a similar ‘warning’ in another Grab vehicle.

Can the argument be brought across better?

While we can all agree that drivers should never be breaking traffic rules and endangering their lives so their passengers can reach their appointments on time, could this message be brought across in a more tactful manner?

Could the driver have also mention safety concerns in the ‘reminder’ that all passengers can resonate with?

What are your thoughts? Let us know down below.

Man Escapes From Burning Car Along BKE, Is Thankful To Be Alive