Just because it's Himalayan salt doesn't mean it's healthy.

For some reason, Himalayan Salt Candy has been wildly popular. In fact, it’s so popular that there are counterfeit versions of it.

Now, a Malaysian dietitian has warned the public that even if you stay away from the counterfeits, the real deal may also be harmful. That is, if you indulge yourself a little too much. 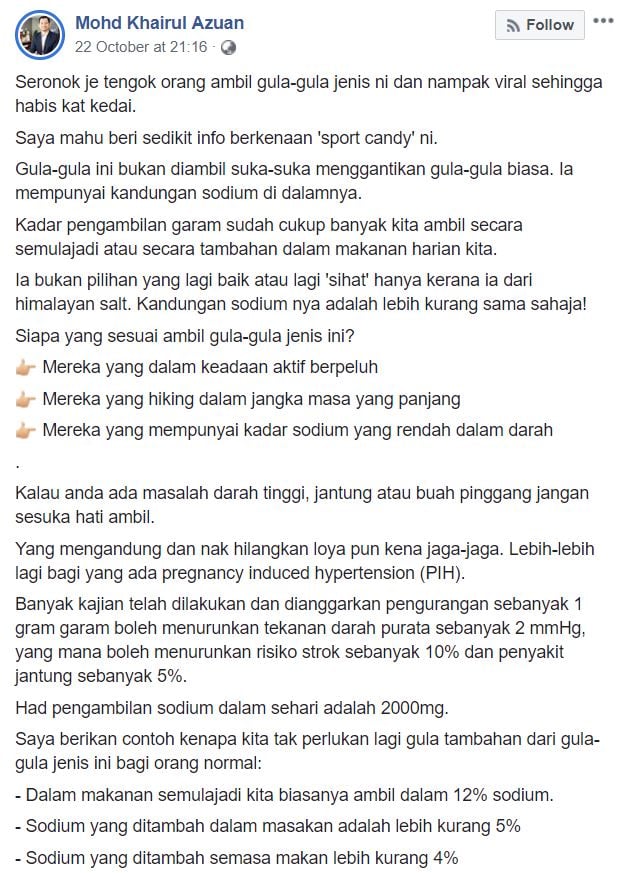 Here’s the translation in full:

It’s interesting to see people buy this kind of viral sweets until it’s sold out in stores.

I want to give you some information on this ‘sport candy’.

These sweets should not be eaten as you like in place of normal sweets due to its sodium content.

Our daily diet already exceeds the recommended amount of sodium that we should take.

It’s not a better choice or ‘healthier’ just because it has Himalayan salt. The sodium content is about the same!

Who are these sweets suitable for?

👉 People who are physically active.
👉 People who hike for long durations
👉 Those with low blood sodium
.
If you have high blood pressure, heart or kidneys problems, don’t eat it to your heart’s content

Those who are pregnant and want to get rid of nausea should be careful too. Especially for those who have pregnancy induced hypertension (PIH).

Many studies have been carried out and it is estimated that a reduction of 1 gram of salt can reduce the average blood pressure by 2 mmHg, which could reduce the risk of stroke by 10% and heart disease by 5%.

The daily recommended intake of sodium [in Malaysia] is 2000mg.

Let me give you an example of why we no longer need extra sugars from these types of sweets for normal people:

We have enough sodium in our daily diet. No need for more from these sweets.

High blood pressure is an issue most closely linked to sodium. Complications include persistent headaches, heart disease and kidney problems.

Avoid excess sodium. We already have more than enough of it.

Eating these sweets to enjoy health benefits is just a myth.

And I’m not sure why people take it for a sore throat when it’s not even a lozenge. You’re just adding sodium to your diet without realizing it.

The dietitian, Mohd Khairul Azuan, shared that most of our sodium intake comes from our food, which, in modern society, usually exceeds the daily recommended amount. 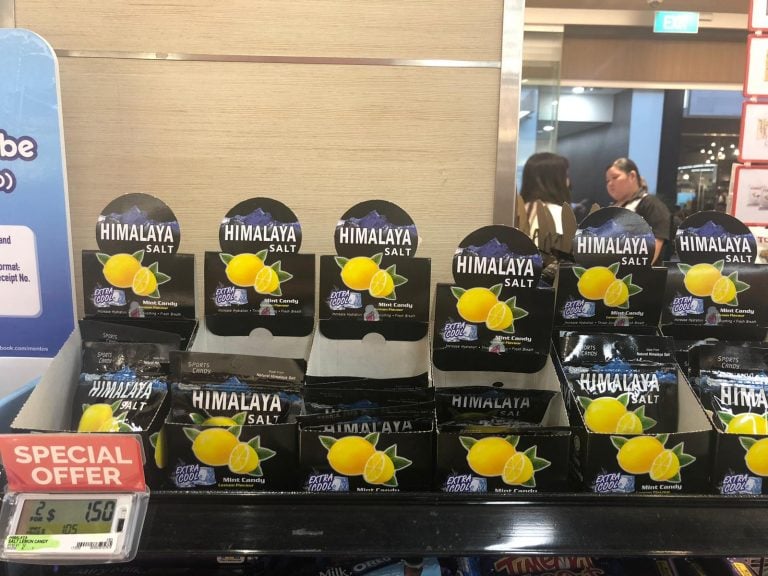 Adding 1 or 2 pieces of Himalayan salt candy to our diet every other day might be detrimental to our health in the long run.

Health issues like high blood pressure are closely related to consuming too much sodium. Other complications that may arise include heart and kidney problems. People who are already suffering from these conditions, as such, should stay away from these sweets.

Pregnant women should avoid the sweets

Mohd Khairul goes on to add that pregnant women should think twice about using these sweets to relieve their nausea. 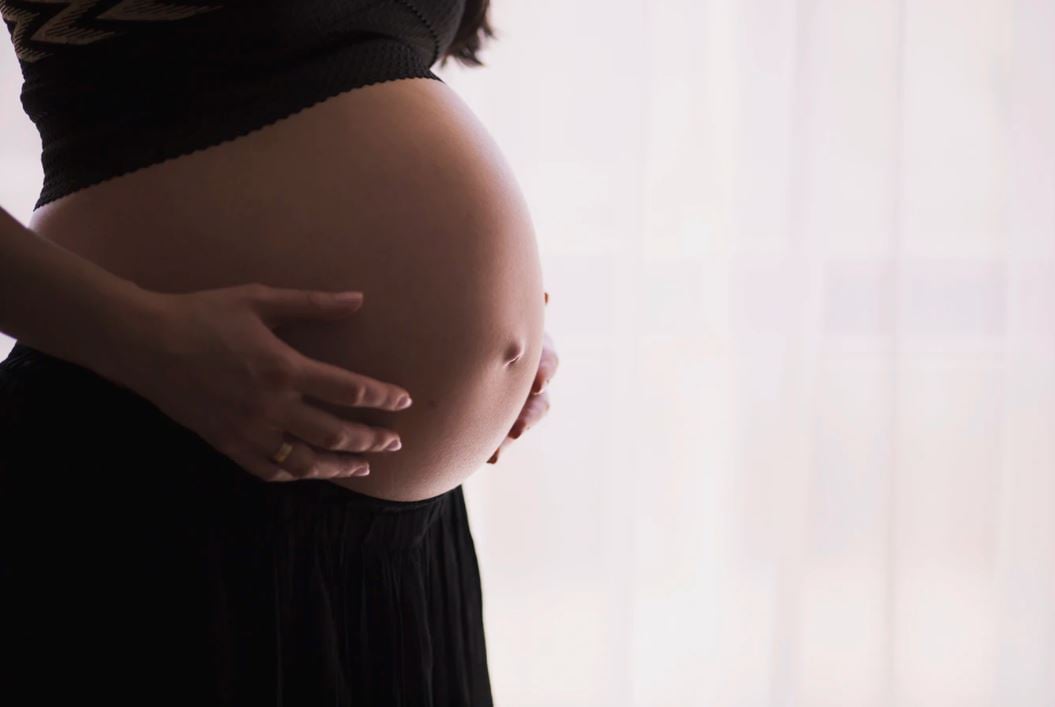 This is especially so for those diagnosed with pregnancy-induced hypertension (PIH). This because PIH is linked to preeclampsia, which can be threatening for both mother and child.

Enough salt in our diet

Throughout his post, the dietitian emphasises that there is more than enough sodium in our daily diets. As such, even though each individual sweet is not high in sodium, we would do well to limit our intake.

In fact, Singaporeans too take in more sodium than we should. According to Health Hub, the average Singaporean consumes 9g of sodium per day, 4g more than the recommended amount.

To put things in perspective, a plate of roasted chicken rice already has 1.3g of sodium.

He supported his point by showing that there’s research that says there are benefits to reducing your sodium intake, even if by just 1g.

For example, you will be able to lower your blood pressure by about 2mmHg.

You’ll also be able to reduce risks of suffering a stroke by 10% and heart disease by 5%.

An occasional indulgence is okay

So, who can eat these sweets?

Mohd Khairul says that this sweet is only suitable for:

However, you probably still shouldn’t eat so much of these sweets. After all, too much of a good thing is almost always bad.

He ends off by saying that the concept of eating Himalayan Salt Candy to be healthier is just a myth — just because it contains Himalayan salt does not mean it’s immediately healthy.

Remember, moderation is the key to good health.