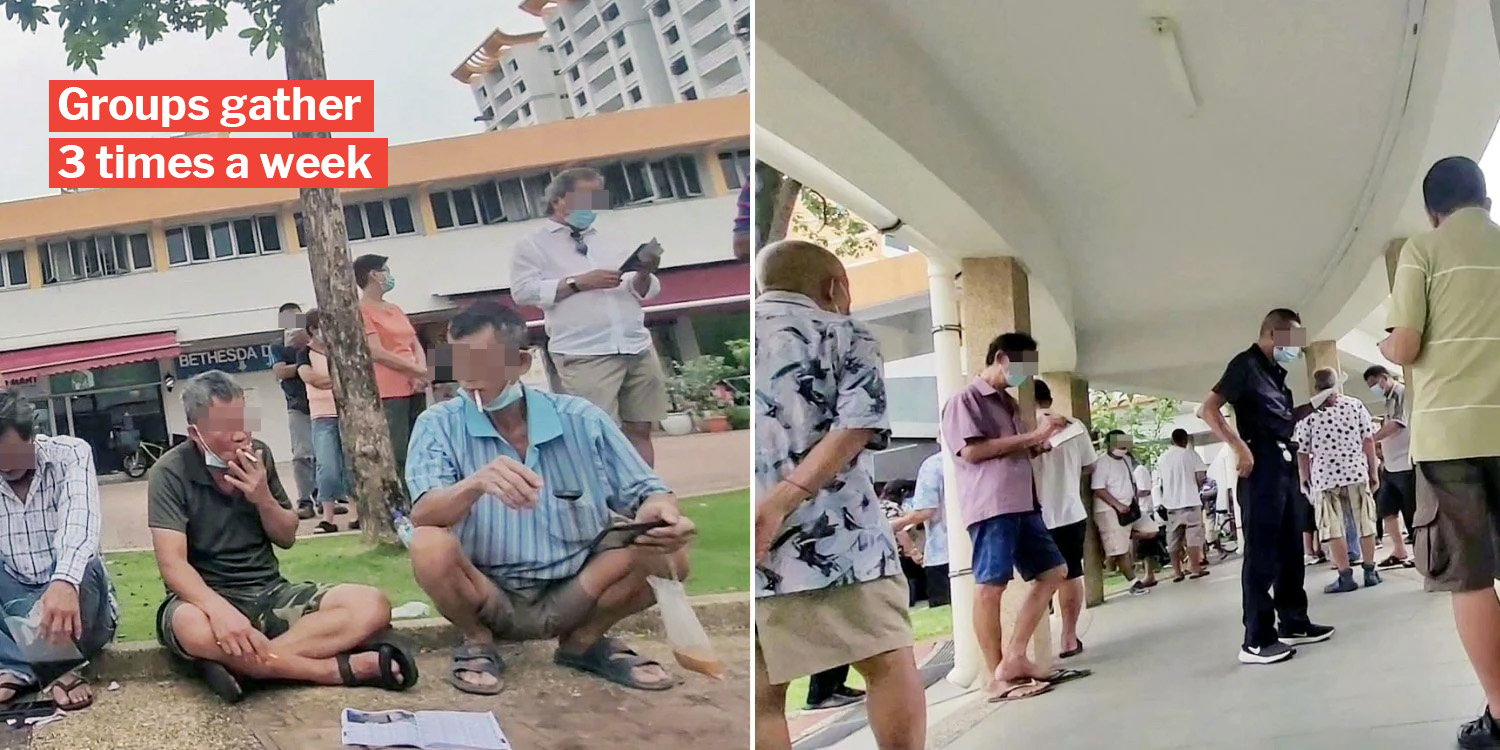 Though we’re in the midst of an unprecedented Covid-19 surge and seniors are advised to stay home, some old habits die hard.

Betting on horse racing is still a popular pastime among older folks, and it seems that safe distancing measures won’t deter many of them.

The vicinity of a coffee shop in Bedok is famous for this activity, and it’s reportedly still packed with crowds of uncles despite the best efforts of the authorities to discourage them. According to residents, the crowds are a regular presence, gathering there 3 times a week. Uncles and aunties have been seen crowding around the walkway, openly betting on races.

This has caused consternation to many residents, according to Zaobao.

Over 50 people spotted, some not wearing masks properly

62-year-old retired resident Mr Wang told the paper he saw more than 50 people in the walkway betting on horses on Friday (1 Oct). Some weren’t wearing their masks properly, neither were they keeping a safe distance from one another.

The crowds would usually gather 3 times a week – Wednesday, Friday and Saturday – which are apparently the horse-racing days.

Pavilion fenced off, but to no avail

Mr Wang also said that the pavilion next to the coffee shop was fenced off about 2 weeks ago, ostensibly to prevent crowds from gathering. 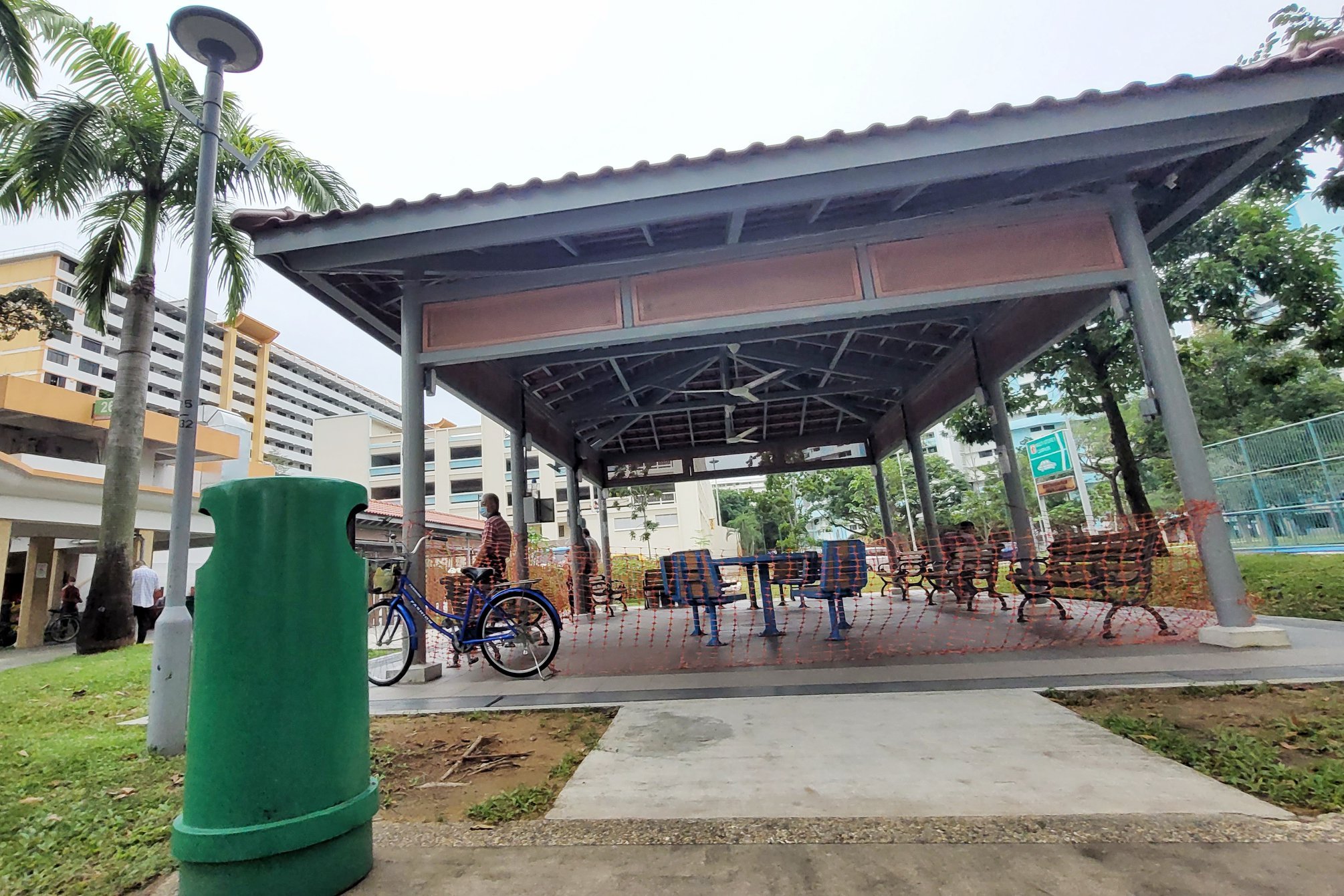 However, this didn’t help, as the crowd just moved elsewhere, and the betting went on.

He hoped that the police would strengthen enforcement there as the avid gamblers don’t seem to care that the pandemic situation in Singapore is worsening.

On Saturday (2 Oct), at about 3pm, Zaobao observed more than 50 people in and around the walkway.

Some were filling out betting slips, and others watched the races on their phones. 2 or 3 were seen with large stacks of $50 notes.

As the pavilion was closed off, punters sat inside the coffee shop or milled around in small groups outside.

1 uncle was also seen removing the netting on a nearby bench to sit down. Others sat and squatted in groups, pulling down their masks to smoke and drink.

There are about 15 benches in the open area between blocks 25 and 26, but some of them are missing.

It was also observed that the crowd left behind rubbish like betting slips, cups, cans and tissues.

Another retired resident, 63-year-old Ms Deng, said the problem of gamblers crowding the area has existed for more than 4 years.

She thinks that as some of the seniors live alone and have nobody to take care of them, they’ve no choice but to go out to shop and buy food.

Mr Chen, a 32-year-old company director, believed that the situation would be tough to improve.

Other residents told Zaobao that the situation would improve when the authorities implemented new measures, and the crowd would lessen.

However, the uncles have come back in force recently.

The pandemic is harder on seniors

It might be alarming to see huge crowds of uncles in Bedok as Singapore’s Covid-19 cases skyrocket.

After all, when groups of seniors gather, the chances of a cluster forming among the more vulnerable members of society are greater.

However, the pandemic may be harder on our seniors, who’re used to a certain way of life.

Amid this challenging situation, it may help to empathise and approach them with kindness to help them understand.