Banging noises were heard at 2.45am.

Back in 2021, a reader, who is also a Hougang resident, told MS News about her noisy neighbour who had been terrorising residents at Block 552 Hougang Street 51 with his incessant antics for over 11 years.

Recently, there appeared to be a breakthrough in developments when her Member of Parliament (MP) paid a surprise visit.

MP Darryl David, accompanied by police and an HDB official, came down personally to mediate the situation.

However, after they left, the resident shared that the neighbour continued to make loud noises, even in the wee hours of the morning.

Although her hope was short-lived, the resident is still holding on for a resolution.

On Thursday (12 May) night, the resident shared that her MP and other authorities finally came down to mediate the long-standing situation.

CCTV cameras captured MP Darryl David speaking with the resident outside her flat. She posted a screenshot of the “surprise visit” on TikTok, adding that some of her other neighbours were there too. 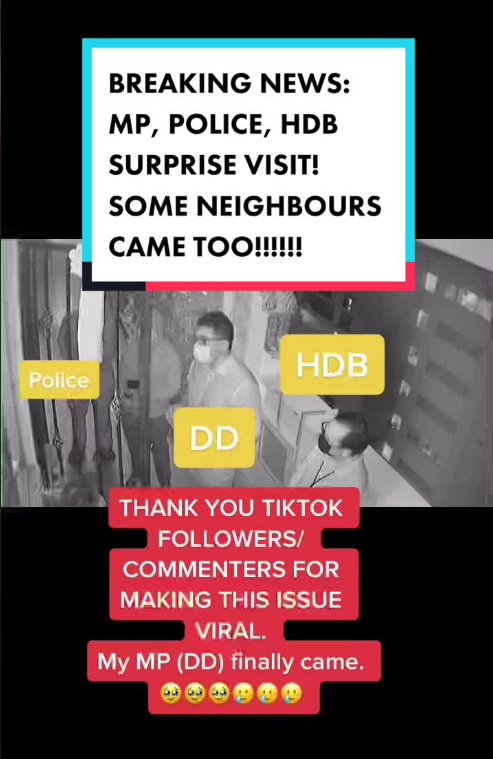 However, according to a comment by OP, the MP had no idea how to solve her stressful situation and even asked “what he can do to help”.

This puzzled the OP, who pointed out that he should be the one coming up with suggestions.

Unfortunately, the trouble-making neighbour was apparently not home at the time of the visit and was not aware of the meeting.

Oblivious to the situation, he simply continued with his antics.

The next day, the resident went live on TikTok to answer questions from her followers.

While she was streaming, a follower managed to record the neighbour making loud banging sounds in the background. This allegedly happened at around 2.45am.

She lamented about how the situation hasn’t changed despite the MP’s visit.

Hope authorities can make exception to rules for severe cases

This endless cycle seems to have no end for the poor residents despite numerous exchanges with the authorities.

HDB has stated that such disputes are private matters and encourages individuals to communicate and settle them amicably. However, while it’s understandable that rules are meant to be followed, perhaps the authorities can consider making an exception for special cases like this.

No matter what unfolds next, we hope this saga has a happy ending and that the neighbours can arrive at a peaceful resolution so everyone can co-exist in harmony.

Featured image adapted from @myneighbourfromhellsg on TikTok and TikTok.