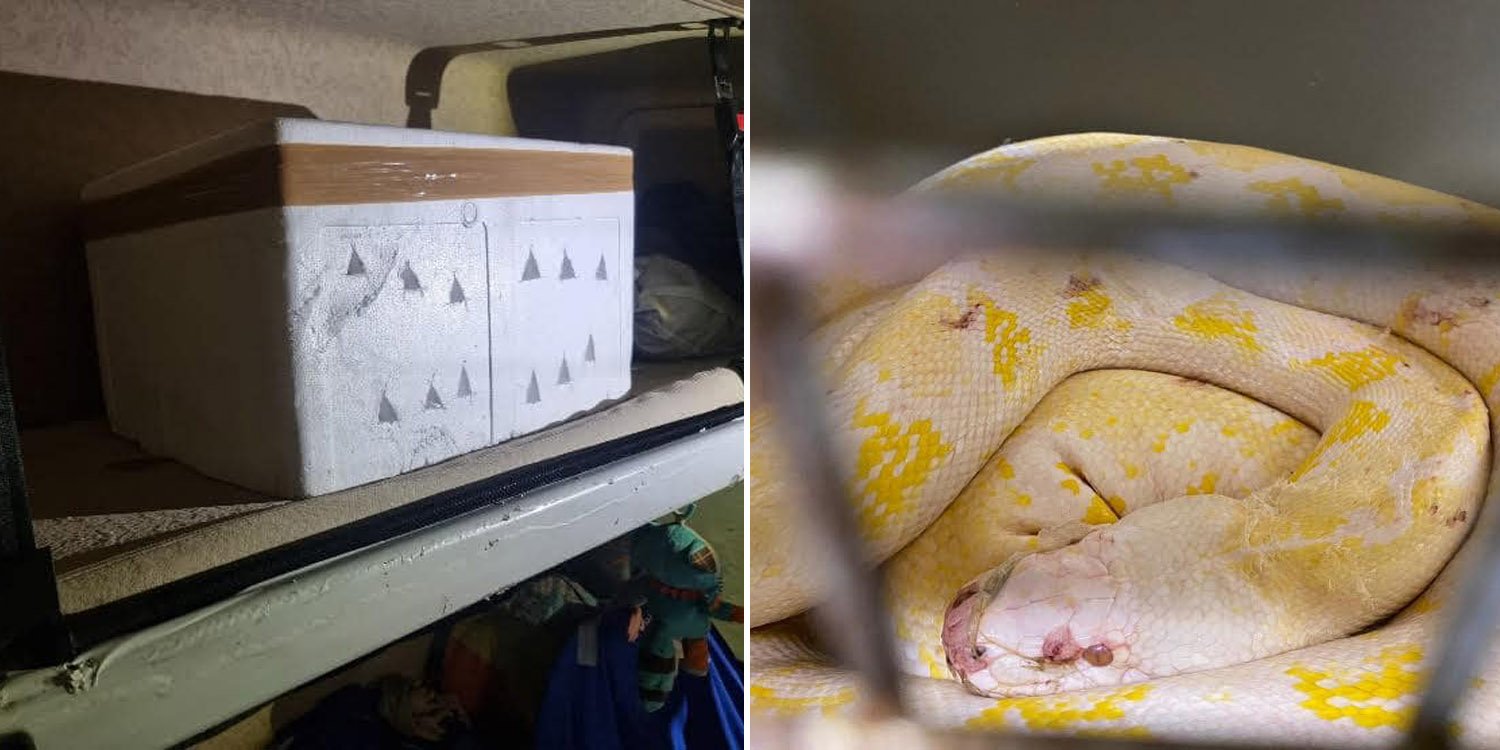 The driver tried - and failed - to slither past authorities.

Every now and then, we hear of smugglers trying their luck in slipping illegal items past Singapore’s checkpoints.

On 7 Apr, a driver attempted to snake past Immigration and Checkpoint Authority (ICA) officers at Tuas with live endangered pythons in a lorry. However, thanks to our trusty officers, their plans were foiled. The snakes were later handed over to National Parks Board (NParks).

NParks and ICA have reminded travellers not to bring live animals, including birds and insects, into Singapore without a proper permit.

On 7 Apr, ICA officers at Tuas Checkpoint were conducting checks on a Malaysia-registered lorry transporting cement when they found a styrofoam box.

The box was hidden in the lorry’s cabin area and had multiple holes on its sides. Initially, the driver claimed that the box contained food. After further questioning, he eventually admitted that there were live snakes inside. In addition, the driver did not have valid import permits and is now under investigation by NParks.

According to ICA’s press release, NParks brought the two snakes to its Centre for Wildlife Rehabilitation for examination.

They later identified the snakes as reticulated pythons. This species is protected under the Convention on International Trade in Endangered Species of Wild Fauna and Flora (CITES). ICA emphasised that the illegal trade of such wildlife threatens biodiversity and disrupts ecosystems around the world. It can also pose serious health risks as it evades biosecurity and sanitary controls.

Besides that, the animals are at risk of unnecessary suffering and even death when smuggled under poor conditions.

This is why NParks strictly regulates animal importation. It serves to prevent the introduction of exotic diseases into Singapore while safeguarding the health and welfare of animals.

Following the incident, ICA stressed that safeguarding Singapore’s borders is their top priority. They will continue to stay vigilant and thwart any attempts to smuggle prohibited items onto our shores.

NParks added that they would continue monitoring and enforcing against illegal wildlife trading. The public can also help by not purchasing wildlife or keeping them as pets.

ICA and NParks have reminded travellers not to bring live animals into Singapore without a proper permit. The public can refer here for more information on bringing in pets from overseas.

Under the Endangered Species (Import and Export) Act, importation of a protected species without a permit is an offence that carries up to two years’ jail and/or a fine of up to S$50,000.

Kudos to our sharp-eyed ICA officers for finding and rescuing these pythons.

While bringing in exotic animals might not seem dangerous at first, it can have unpredictable and far-reaching consequences.

So, if you have any information on suspected illegal wildlife trade activities, do lodge a report to NParks at 1800-476-1600.