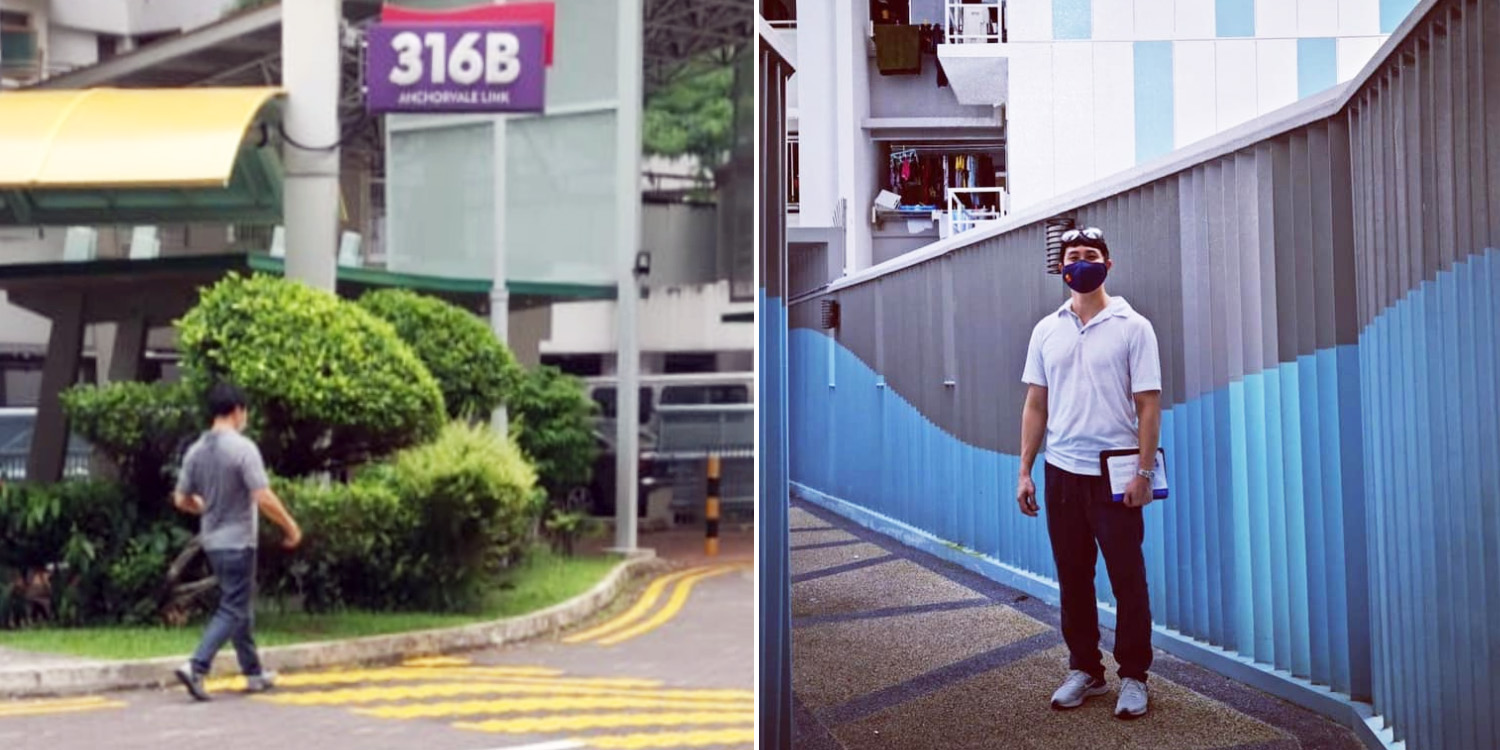 The weather in the past few weeks has been sweltering.

Many Singaporeans are content to hide from the heat while working from home. But a Member of Parliament’s (MP’s) work entails being involved in the day-to-day affairs of estates under their care.

This makes it necessary for them to actively walk around the estate — a potentially uncomfortable task if you’re sensitive to the heat.

So when a netizen posted a photo of a man walking alone around Anchorvale and identified it as MP Jamus Lim, netizens quickly noted that he was soaked in sweat. 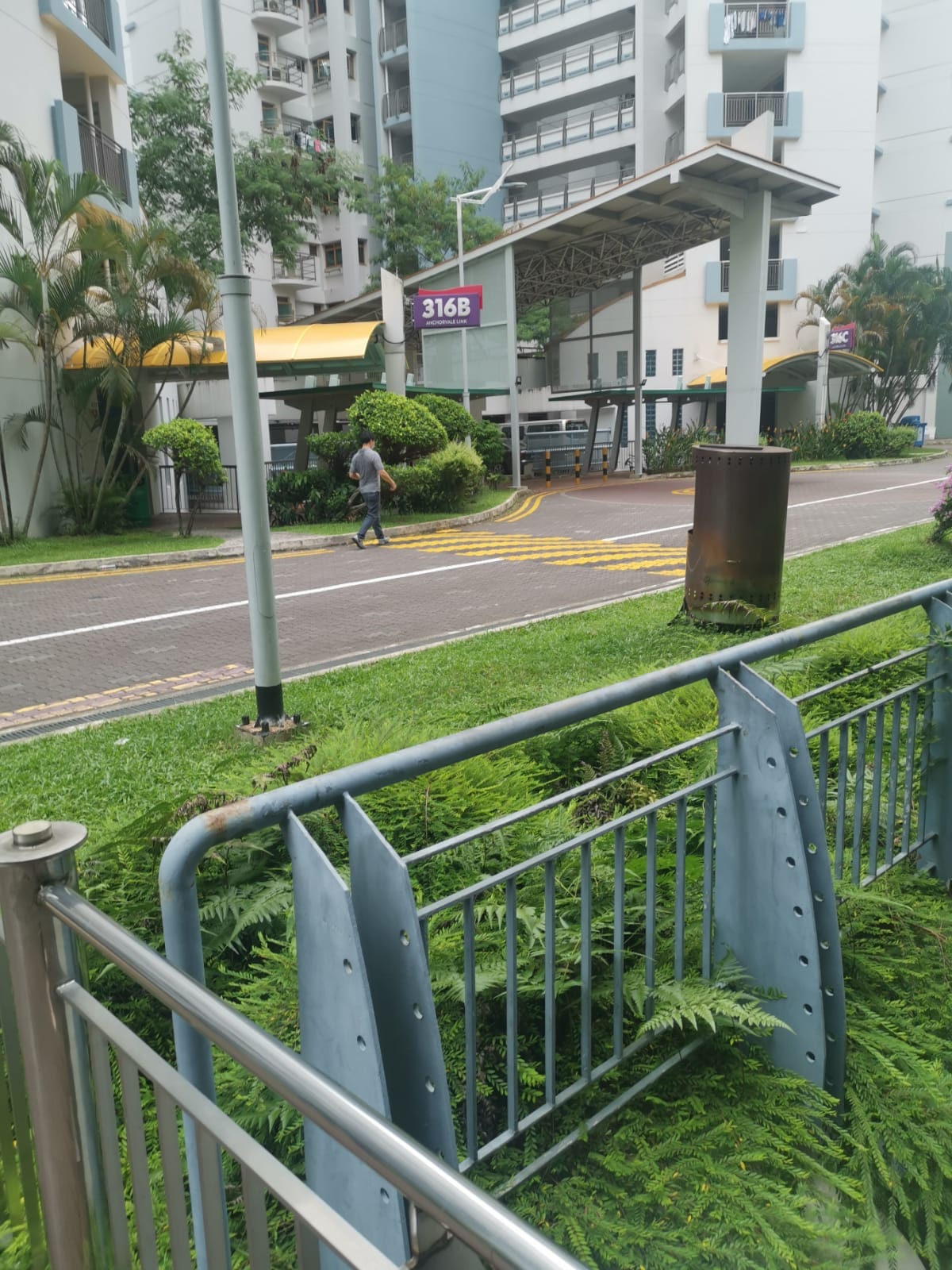 Many praised him for his dedication despite the heat, and also noted that he wasn’t assisted by anyone in his rounds.

The photo was posted on Friday (4 Jun) in Void Deck Kakis Facebook group.

From the block signage, we can see that it was taken outside Block 316B, Anchorvale Link in Sengkang. 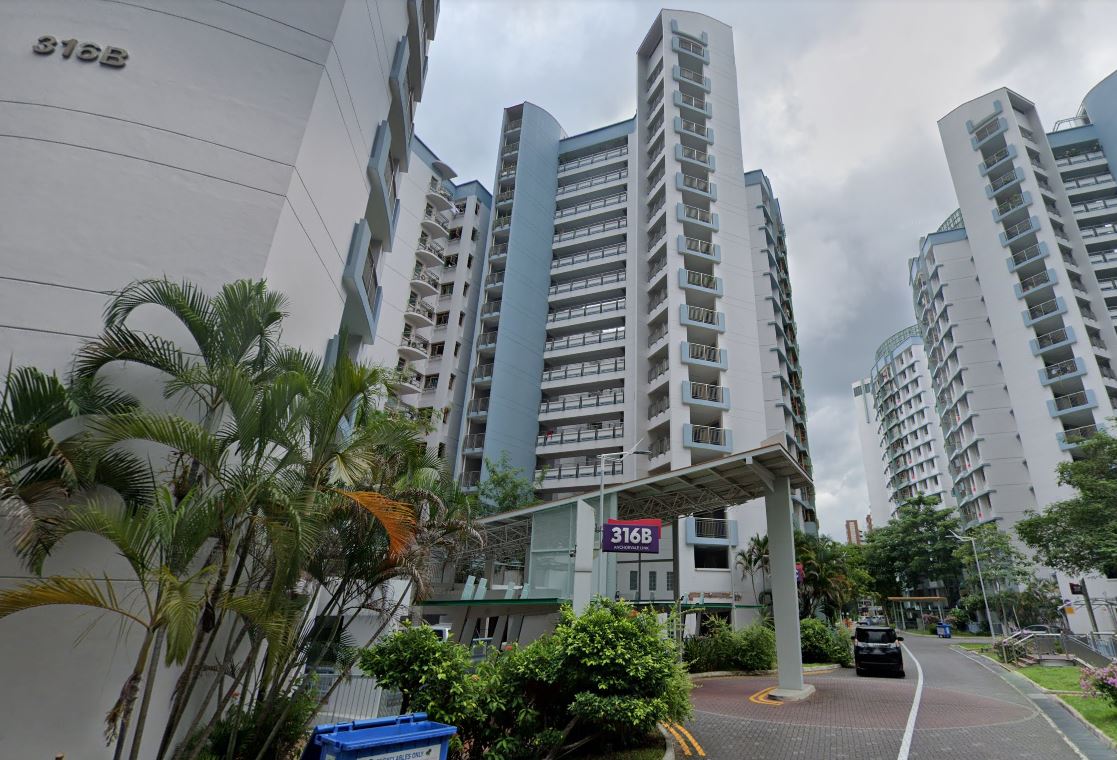 While the man in the photo can only be seen from the back, the OP – a Ms Dania Nasuha – identified him as Dr Jamus Lim, who’s MP for the Anchorvale ward in Sengkang.

She also marvelled at how Dr Lim was doing his rounds without any entourage.

Netizens were quick to point out that the man’s whole body was sweating.

That could be inferred from the huge dark patch on his grey shirt that covered almost his entire back. 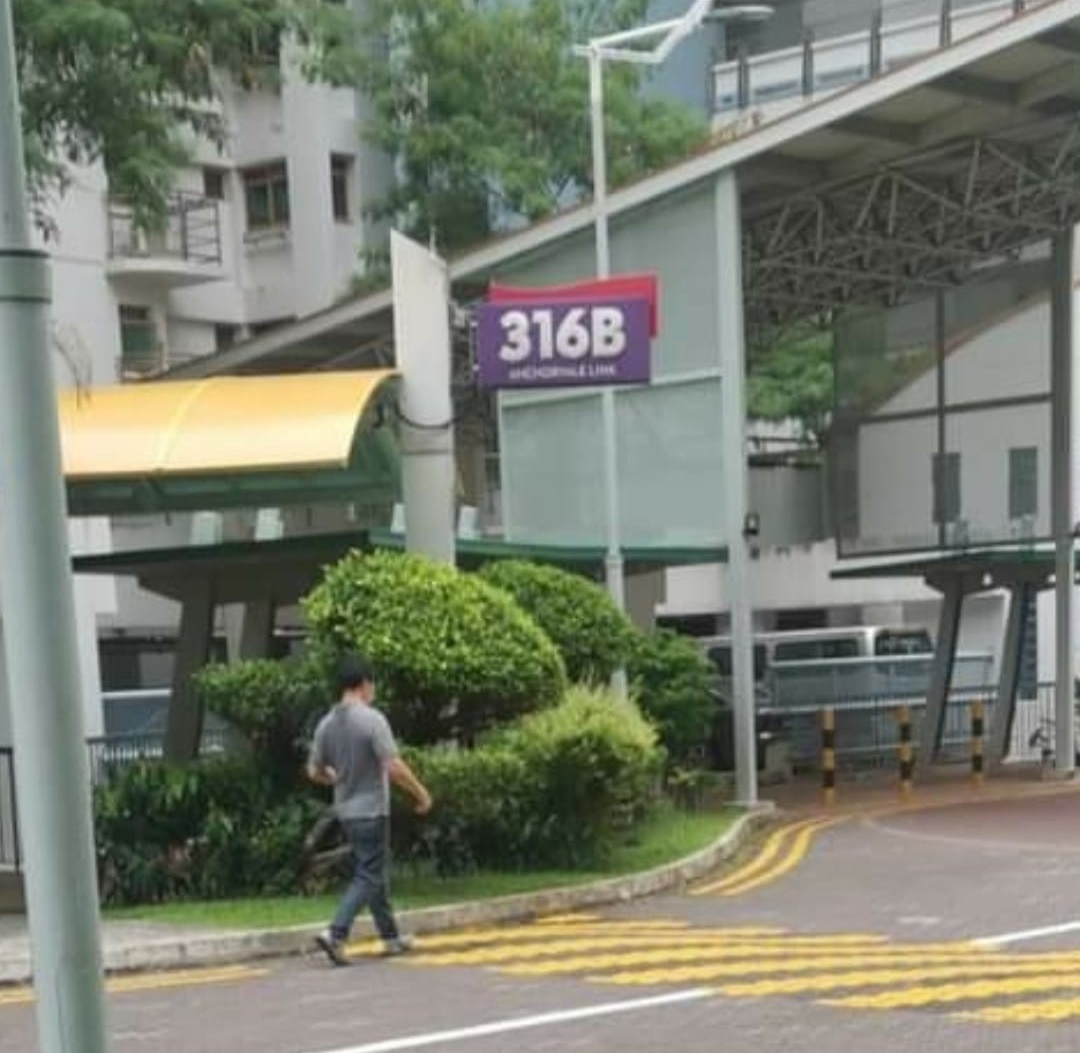 Given the crazy hot weather we’ve been having, any person walking out in the open in the middle of the day would be perspiring like mad.

The sight of his sweaty shirt managed to touch at least one netizen.

Making an effort when nobody is watching

Others picked up on the fact that he was seen alone in the photo, without an entourage or photographers to take photos of him.

One netizen, possibly referencing a quote attributed to coach and inspiration author John Wooden, said the effort made when nobody is watching is what matters.

The quote by Wooden is: “The true test of a man’s character is what he does when no one is watching.”

Thus, if indeed the man is Dr Lim, he seems to have gained some respect from this photo.

To be sure, Dr Lim isn’t shy over admitting that he sweats a lot.

In Jun 2020, before being elected as Sengkang MP, he posted a photo of his sweaty shirt while doing house visits. 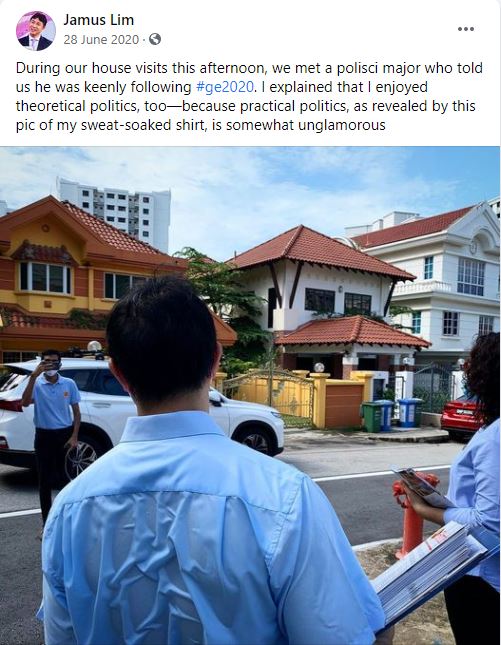 This photo of a sweaty shirt illustrates the hard work that goes into campaigning for a chance to serve the people.

As such, being an MP definitely isn’t a glamourous or cushy job.

Although Dr Lim hasn’t mentioned anything about the photo on his social media, a glance at his Facebook page shows that he does prefer a simple ensemble of polo T-shirt and pants when carrying out his MP duties. 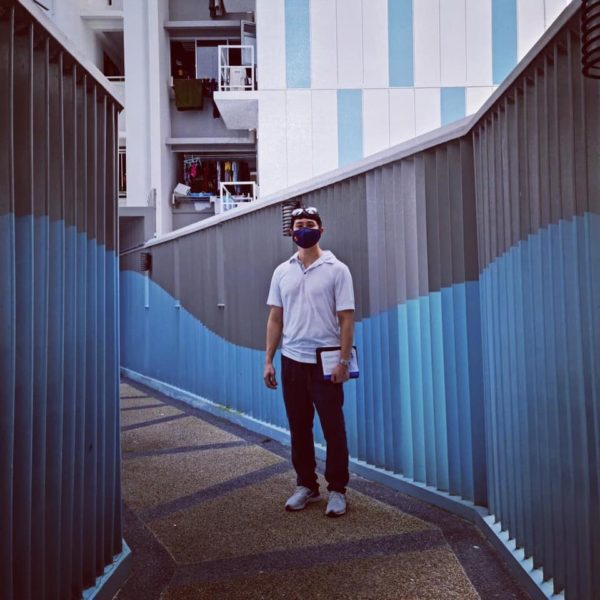 That includes a grey top that looks very similar to the sweat-soaked one worn by the man in the photo.

Here he is wearing it during a house visit. 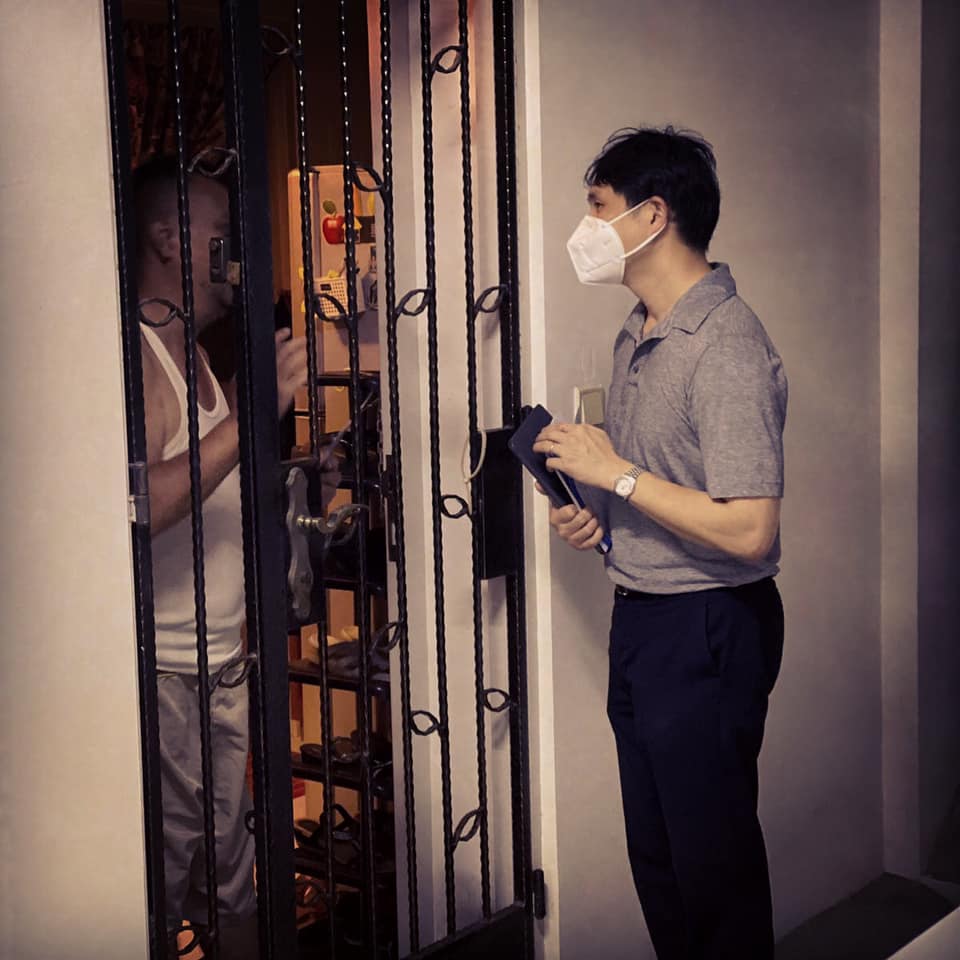 Be thankful to our MPs

If the sweaty man in the photo is indeed Dr Lim, we share netizens’ kudos to him.

Doing estate walks under the hot sun is no easy feat, and doing it alone without support is also remarkable.

If anything, it reminds us to be thankful to our MPs and grassroots volunteers for their effort in reaching out and being involved even though it might not be comfortable.