Walkabouts are an important way for political candidates to meet the residents of the area they’re contesting, as they can help make an impression on voters come Polling Day.

However, when the People’s Action Party (PAP)’s Ms Jessica Tan requested to take a picture with an East Coast GRC resident on Tuesday (7 Jul), the ensuing conversation got a netizen rather upset at her perceived insensitivity to religious norms. 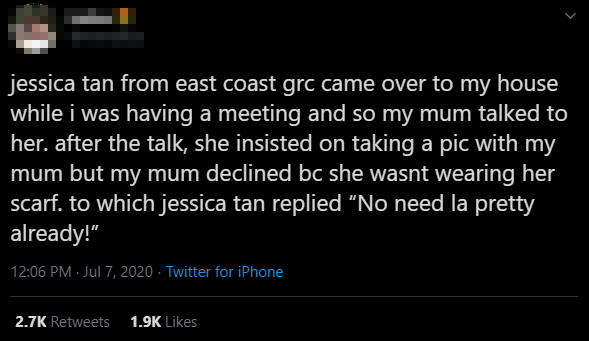 The netizen’s mum had declined to take a picture as she wasn’t wearing a scarf – worn for religious reasons – but Ms Tan had apparently insisted.

When alerted to the tweets, Ms Tan reached out to the netizen to offer an explanation and seek forgiveness for her oversight. 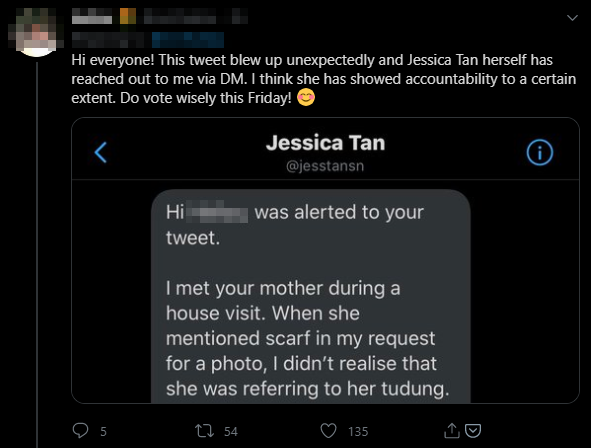 PAP’s Jessica Tan asks for photo with resident without headscarf

Ms Tan was doing walkabouts around East Coast GRC, where she’s contesting for GE2020, and came to the netizen’s house.

However, as she was in a meeting, her mum talked to Ms Tan instead.

After the talk, Ms Tan asked for a picture with the netizen’s mum, but she declined, saying she wasn’t wearing her scarf.

Many Muslim women wear a headscarf for religious reasons.

Unfortunately, Ms Tan seemed to have mistaken her “scarf” as something else, instead of the headscarf or tudung/hijab that the netizen’s mum was referring to, and said:

Netizen questions why Ms Tan thinks scarf is for beauty

The netizen questioned why Ms Tan would reply in that manner as the headscarf wasn’t, as the netizen says, “for beauty purposes”.

She also claims that Ms Tan insisted on taking the picture despite her mum’s refusal.

Ms Tan reaches out to apologise

Subsequently, Ms Tan was alerted to the tweets, and reached out to the netizen.

This was Ms Tan’s response: 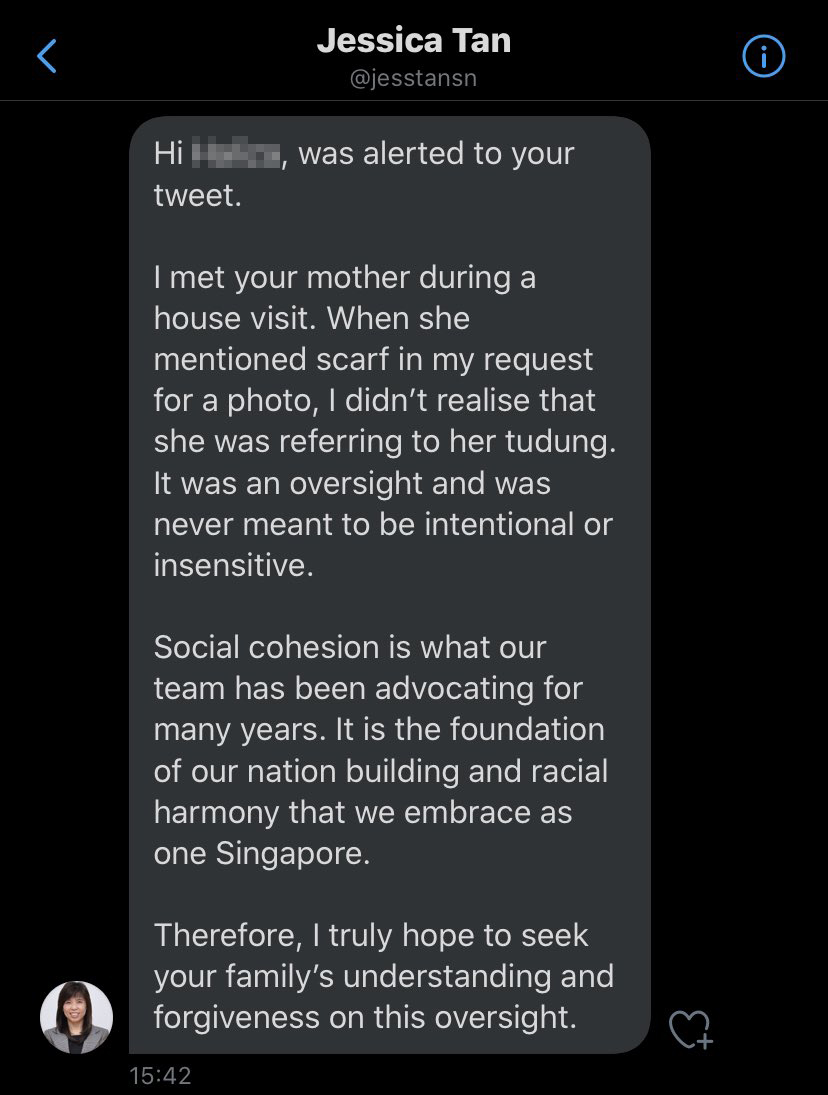 She explained that the incident was an oversight and that she didn’t mean to be insensitive.

As the tweets had reached the attention of many other netizens, the netizen decided to publicly post her reply to Ms Tan via direct messages.

While she appreciated that Ms Tan reached out to her, she also emphasised that ‘no means no’.

She also replied that as an MP for 3 terms, Ms Tan should be well-versed in matters of social cohesion.

Ultimately, she called the oversight unacceptable, as she should have known better.

We’re unsure if Ms Tan has responded to the netizen’s reply.

The netizen acknowledged that Ms Tan has shown accountability for reaching out to apologise and realising her error.

While there may have been a disconnect in the original interaction that led to the viral tweets, we hope that Ms Tan and other GE2020 candidates will learn from the incident.

Namely, that headscarves aren’t worn for vanity reasons by Muslims.